In Spain, alcohol consumption is part of the culture. The traditional pattern consists of regular consumption associated with meals, family celebrations, and social events.1-2 However, this drinking pattern is increasingly being replaced among young people by intermittent weekend consumption, with episodes of heavy drinking.3 Heavy drinking is characterized by the consumption of large amounts of alcohol in a short time, and brings blood alcohol concentrations to .08 g/dl or above. In Spain, heavy drinking is generally practiced outdoors, at public spaces where large numbers of youths meet. Noise, littering, and even destruction of public property are the main negative consequences attributed by society to this drinking pattern.4 Hospital admissions due to alcohol poisoning are other consequences, often out of public sight. However, in Spain the perceived risk of heavy drinking is quite low compared to the perceived risk of the consumption of other drugs, even in small doses.3

Chronic alcohol abuse has well-established effects on morbidity and mortality.5,6,7 However, heavy drinking may also increase the risk of alcohol-related health issues.8 A recent transversal study has estimated that alcohol-related injuries are more frequent among university students who indulge in a heavy drinking pattern of consumption than in those who do not participate in this pattern of drinking (43% compared with 10% occurrence of alcohol-related injury).9 Even though there are important differences between populations, we think this association can also be apply in our context.

An open cohort analysis was conducted within the framework of a cohort study designed to evaluate the neuropsychological and psychophysiological consequences of alcohol use. The study was carried out between November 2005 and May 2012 among students at the University of Santiago de Compostela (Spain). We performed a cluster sampling. From each one of the 33 university schools, at least one of the freshman year classes was randomly selected (a total of 53 classes). The number of classes selected on each university school was proportional to its number of students. All students present in the class on the day of the survey were invited to participate in the study (n = 1,382). Abstinent subjects were excluded from the study. The study was approved by the university ethics committee (October 2004).

Participants were evaluated via a self-administered questionnaire in the classroom in November 2005 and again in November 2007. Students that provided their phone number were further evaluated by phone at 4.5- and 6.5-year follow-up. On all four occasions, alcohol consumption and alcohol-related injuries were measured using the Galician validated version of the Alcohol Use Disorder Identification Test (AUDIT).11,12 We decided to use the AUDIT because it is widely considered one of the best screening tests for alcohol abuse; it' transnational; it has been use with college population and it has also been use specifically for measuring heavy drinking. At baseline and at the 2-year follow-up, participants responded to additional questions about age of onset of alcohol consumption and about cannabis consumption.

Cannabis consumption and number of alcoholic drinks on a typical day (Question 2 of the AUDIT) were also considered as independent variables, because it is known that both variables can result in a lower risk perception and decreased attention, which may consequently lead to injury. Adjusting by both variables, we can therefore identify the specific effect associated to heavy drinking. Frequency of alcohol consumption (Question 1 of the AUDIT) was also considered in order to remove the abstinent subjects.

Cannabis consumption at 18, and 20 years old. This variable was measured with the question "Do you consume cannabis when you go out? Never; Sometimes; Most of the times; Always". The categories Most of the times and Always were recategorized to Usually.

Frequency of alcohol consumption at 18, 20, and 22 years old. Question 1 of the AUDIT: "How often do you have a drink containing alcohol? Never; Monthly or less; Two to four times a month; Two to three times a week; Four or more times a week".

We used multilevel logistic regression for repeated measures to obtain adjusted Odds Ratios for Alcohol-related injuries. The university school and the class were considered as randomized variables. The follow-up time was included as an offset term. Data were analyzed using Generalized Linear Mixed Models from the SPSS 20.0.

In total, 117 cases of alcohol-related injuries were detected in a follow-up period of 3,706.00 years. The incidence rate of alcohol-related injuries during the follow-up was 3.2 per 100 students year-1 [95%CI: 2.58; 3.73]. The proportion of subjects who engaged in heavy drinking is significantly greater for male students in every period. This proportion decreased significantly at the age of 24 for both genders. The number of alcoholic drinks on a typical day is also greater for male students, except in the last period. This number also decreased significantly over the study period for both genders. (Table 1).

Table 1. Consumption of alcohol by gender. 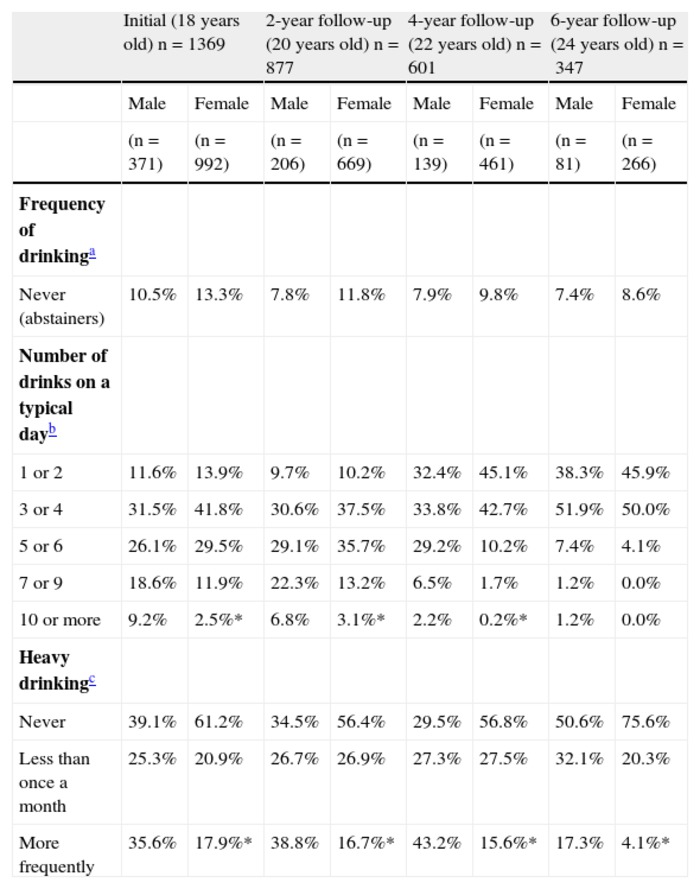 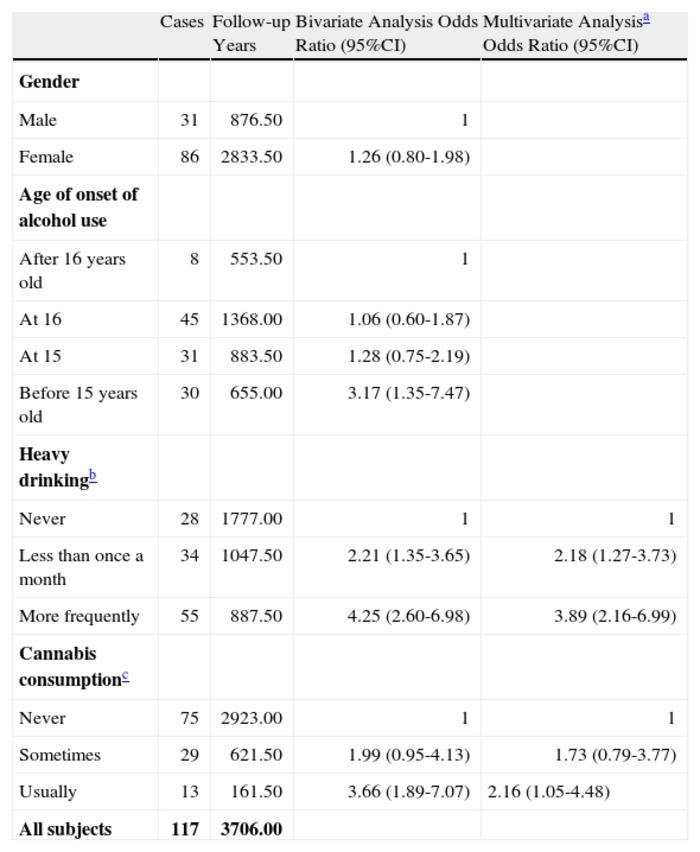 a - Adjusted for all the variables included in the column and for question 2 of the AUDIT:
"How many alcoholic drinks do you have on a typical day when you are drinking?"
b - Question 3 of the AUDIT: "How often do you have six or more drinks on one occasion?"
c - "Do you consume cannabis when you go out?"

The findings of this study demonstrate a strong correlation between heavy drinking and the incidence of alcohol-related injuries, especially for heavy drinking that happens more than once a month. This effect persisted after adjusting for confounding variables including number of alcoholic drinks on a typical day and cannabis consumption.

Some regions of the human brain continue their development during adolescence and youth, which explains why an excessive consume of alcohol at these ages can affect brain plasticity and maturation, with long term consequences on behavior.14 Imaging techniques show that high doses of alcohol decrease the activity of some brain regions involved in error processing, prevention of compulsive actions, behavior regulation, cognition, and coordination of motor activities, which may explain the higher incidence of alcohol-related injuries.15 Several studies have indicated that intermittent alcohol consumption (heavy drinking) may constitute a greater risk to neurocognitive functioning than regular alcohol consumption.16

In relation to cannabis consumption, the results of the study are consistent with those of previous studies.17 There was no association between alcohol-related injuries and gender. This novelty should be studied in subsequent investigations and needs to be considered at the time of implementing preventive measures for avoiding this drinking pattern.

Our results largely confirm what is known in the literature, their especial contribution being the population studied: youth of a society with the Mediterranean drinking pattern in which heavy drinking is spreading. Specifically the proportion of alcohol-related injuries in population attributable to heavy drinking was nearly 50%, which means a potential reduction of almost half of these injuries by avoiding this consumption pattern.

With respect to the limitations of the study, the incidence of injuries related to alcohol consumption was probably underestimated for the following reasons: (1) subjects could have forgotten injuries (memory bias) (2) subjects may have minimized the role of alcohol in the occurrence of injuries (3) subjects were not asked how many injuries they had suffered, just whether they had suffered an injury (4) when subjects responded "Yes, but not in the last year" we only considered that this was a new instance of injury if the subject had not reported a previous alcohol-related injury in a previous AUDIT.

Given the study results preventive measures should be implemented. It must be taken into account that in the social context of the study area there might be strong opposition to the application of effective measures to diminish the consumption of alcohol: (1) Spanish society is quite permissive about alcohol use; 3-18 and (2) Spain is one of the largest wine producers in the world and has an important tourism industry built around nightlife.2

Preventive measures should aim to implement programs based on models of social influence, working on normative beliefs, social skills, rules of behavior, motivation, self-control19 and introducing community programs with the participation of families, schools, and civic associations.

Specific activities aimed guard towars college students have proven effective in reducing heavy drinking and its consequences.20-21 At Spain, brief local interventions with young patients in emergency or primary care have shown a reduction in future consumption, risk of hospital readmission, driving under the influence of alcohol, and related alcohol issues.22-23 These interventions should be generalized.

Other policy measures that could be taken are: (1) Rigor in the compliance with alcohol related laws (currently there is a permissive attitude) as: Minimum legal age for alcohol consumption (18 years); ban on the sale of alcohol to under 18. (2) Expand the ban on drinking in public places all statewide, blame the alcohol dealers, specific licenses for selling alcohol where is not consumed, more limitations for advertising and promotion of alcoholic drinks (usually focused in young people), more restrictive measures concerning supply, sale and consumption. And (3) raising taxes and prices of alcoholic drinks, one of the most effective measures in young people. It is estimated that an increase of 10% prices in Europe prevents or avoids 9000 deaths, with the added benefits of 13 million euros deposited at the state taxes. 24,25

We can conclude that heavy drinking leads to an increase of alcohol-related injuries. This shows a new dimension on the consequences of this public concern already related with a variety of health and social problems. Furthermore, our results allow us to suggest that about half of alcohol-related injuries could be avoided by removing this consumption pattern. Future studies should aim at applying the study to other populations and other heavy drinking consequences. Studies about preventive measures, their performance and effectiveness, are also needed. 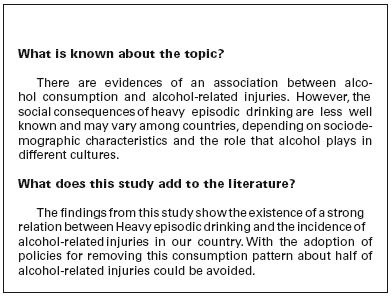 Editor in charge of the article

Analysis and interpretation of data: Moure-Rodríguez

The authors declare that there are no conflicts of interest.

20. Wechsler H., Nelson T.F. What we have learned from the Harvard School of Public Health College Alcohol Study: focusing attention on college student alcohol consumption and the environmental conditions that promote it. J Stud Alcohol Drugs 2008;69:481-90.