This work was supported by a grant of the Romanian National Authority for Scientific Research and Innovation, CNCS-UEFISCDI, project number PN-II-RU-TE-2014-4-2631.

Electronic cigarettes (e-cigarettes) are devices that deliver to the lung aerosols usually containing nicotine and other compounds.1

They are promoted as an alternative to traditional tobacco cigarette smoking, but there are several concerns regarding their use: evidence about their safety and efficacy for smoking cessation remains limited, while they may increase the risk of non-smokers developing nicotine dependence and of current smokers maintaining their dependence.1-5 Moreover, their novel nature and flavouring combined with an unrestricted marketing and sale in several countries may appeal to youth and e-cigarette experimentation might result in use of other tobacco products.3,6,7

Nevertheless, similar with other developing countries from Europe, the effect of the growing popularity and availability of e-cigarettes on Romanian adolescents is inadequately characterised. Hence, this study has two objectives. First, it will assess awareness, opinions and practices regarding electronic cigarettes use among high school students from Romania. Second, it aims to identify correlates of experimentation with e-cigarettes among Romanian adolescents.

The students were informed that their participation in the study was voluntary and were asked to fill in an anonymous questionnaire. All students agreed to participate.

The questionnaire assessed socio-demographic characteristics, awareness and sources of information regarding electronic cigarettes. Opinions about e-cigarettes, their use during lifetime and in the last month, reasons for using them, intention to use them in the next year and experimentation with e-cigarettes by people from the social environment were also investigated. Smoking behaviour was also evaluated; persons who smoked traditional cigarettes in the last month were defined as smokers, those who smoked in the past but not in the last month were considered ex-smokers and students who never smoked traditional cigarettes were never-smokers. Number of cigarettes smoked per day and the intention to quit smoking in the future was also investigated among smokers.

Chi-square tests were used in order to compare smokers, ex-smokers and never-smokers with regard to the investigated issues.

Logistic regression analyses using the stepwise forward method were performed to assess the correlation of e-cigarettes experimentation and several variables among smokers (students who smoke in the last month) and non-smokers (comprised of ex-smokers and never smokers).

Data analysis was performed with the SPSS-20 statistics programme. Significant results are reported at p < 0.05.

The results showed that 37.4% of the students were smokers 19% were ex-smokers, while 43.6% were never-smokers.

Awareness, opinions and social influences regarding e-cigarettes use

Table 1 show that the majority of the students reported having heard about e-cigarettes. The main sources of information were friends (65.2%), internet (57.65%) and people from the same school year (39.7%); smokers were more interested to search information from these sources. One out of four students has got his information from the sale points, 14.6% from their parents and around 12% from school based health education lessons. 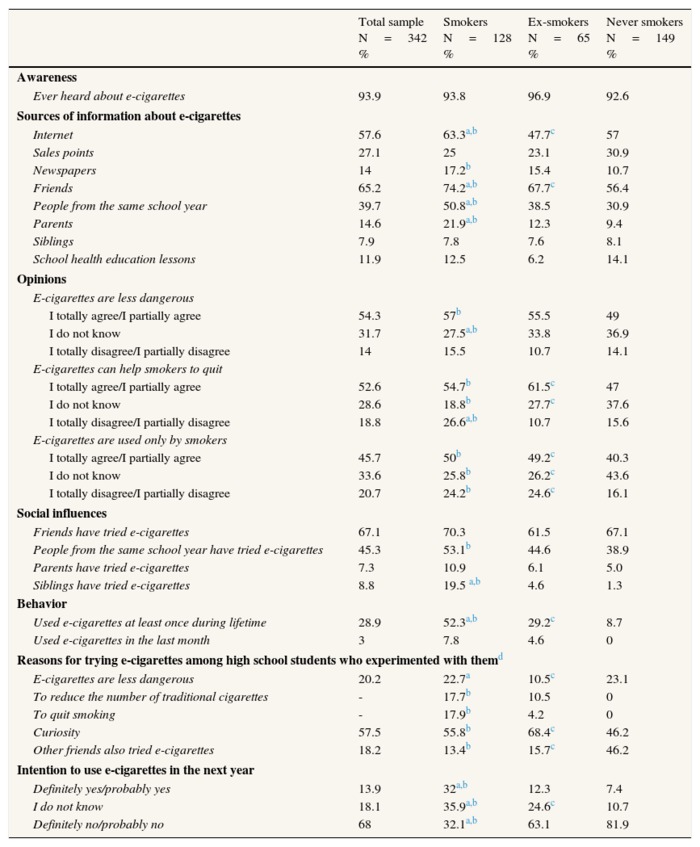 The use of e-cigarettes perceived by students among their social environment was 67.1% among friends, 45.3% among people from the same school year, 7.3% among parents and 8.8% among their siblings.

Experimentation with e-cigarettes and its correlates

This study is one of the few studies performed among adolescents from European developing countries.3-14

The study has several limitations. It involved only a small sample of high school students from two big towns of Romania, which limits the generalization of the results beyond its sample, didn't allow for the analysis of the data separately for boys and girls and might interfere with the detection of some factors associated with e-cigarette experimentation. Due to the cross-sectional design, the identification of causal relationship is not possible.

Similar with other studies from Europe,5-15 this study shows that health education programs and regulatory interventions addressing e-cigarettes are necessary in Romania. More research is needed on how to develope effective public health messages. 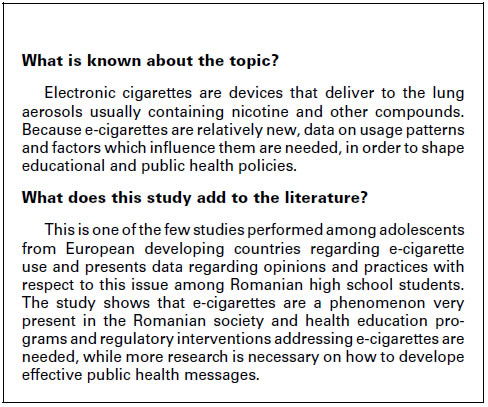 3. Durmowicz EL. The impact of electronic cigarettes on the paediatric population. Tob Control. 2014;23:41-6.

12. Chapman SL, Wu LT. E-cigarette prevalence and correlates of use among adolescents versus adults: a review and comparison. J Psychiatr Res. 2014;54:43-54.