Prevalence and profile of alcohol consumption among university students in Ecuador

This study was fully funded as a selected Program of Research and Innovation by the Universidad Técnica Particular of Loja (Ecuador).

Objective: Alcohol consumption is one of the main health and social problems in Ecuador. The aim of this study was to explore gender differences in the prevalence and psychosocial profile of problematic consumers among university students.
Method: We surveyed 3,232 students by using the AUDIT and psychosocial scales. To discriminate the explanatory value of each variable, a CHAID segmentation analysis was used.
Results: The prevalence of alcohol consumption was 92.24% in men and 82.86% in women. In total, 49.73% of men and 23.80% of women reported problematic consumption. In men, the profile of problematic consumption was defined by higher scores in anxiety and depression, especially if they showed higher levels of psychological stress and lower life engagement. In women, problematic consumption showed a tendency towards psychological inflexibility, especially in those with lower life engagement.
Conclusion: There is a need to prioritise attention to alcohol consumption in university students and to design different interventions for men and women.

Alcohol is the most widely consumed psychoactive drug in the Western world.1 Among the main factors related to risky alcohol consumption, age,2 gender,3 and coping mechanisms4 have drawn special attention. However, the specific profile which discriminates problematic alcohol consumption -considered hazardous or harmful for your health or for psychosocial functioning according to WHO guidelines5- remains unclear.

The aim of this study is to explore gender differences in the prevalence and psychosocial profile of problematic consumers in university students.

A descriptive and cross-sectional study was done under the Helsinki Declaration ethical guidelines. Alcohol consumption and psychosocial variables were surveyed online using scales translated and/or adapted from the original versions to Ecuadorian Spanish. Once the participant logged in as a student at the university, a reminder to complete the survey was displayed for one month. A consent form preceded the survey explicitly guarantying anonymity and a brief results report was provided for their records in order to enhance commitment with forthright answers.

• UCLA Loneliness Scale Revised-Short.7 It evaluates the subjective feeling of loneliness, lack of emotional support or significant relationships compared to the desired one. Scores range from 0 to 9. Higher scores indicate a greater degree of loneliness.

• Life Engagement Test (ELT)t.9 It measures vital commitment or degree to which the person is engaged in activities that are meaningful to them. Scores range from 6 to 30. Higher scores indicate a greater value guided life (life engagement).

• Perceived Stress Scale (PSS-14).10 It evaluates the degree to which situations in a person's life are considered stressful, in terms of unpredictability, uncontrollability and overload. Scores range from 0 to 64. A higher score indicates a greater stress level.

• Patient Health Questionnaire of Depression and Anxiety (PHQ-4).11 It assess depression and anxiety associated with functional impairment and disability days. Scores range from 0 to 12. A higher score indicates a greater anxiety and depression level.

• Satisfaction Life Question (LSQ).12 "How satisfied are you with your life as a whole nowadays?". Scores range from 0 to 10. A higher score indicates higher satisfaction.

In order to establish the discriminatory power of each of the scales for non-problematic and problematic consumers, a CHAID (Chi-squared Automatic Interaction Detection) analysis was conducted. This test provides cut-offs for each scale defining the best-fit profile for both groups. All the statistical analysis were made using the statistical package SPSS (vs. 15.0).

Prevalence of alcohol consumption in men and women

Table 1. Differences in psychosocial variables depending on gender and the level of alcohol consumption.

Lower vital commitment (less than 18 points) was associated with a greater proportion of problematic consumption among those who scored in the 20-36 interval in the AAQ, 52,6% (n = 30) of the subjects. Meanwhile, women who scored in the 12-20 interval (AAQ) had a higher percentage of alcohol consumption when the score in the PSS exceeded 24 points (Fig. 1). 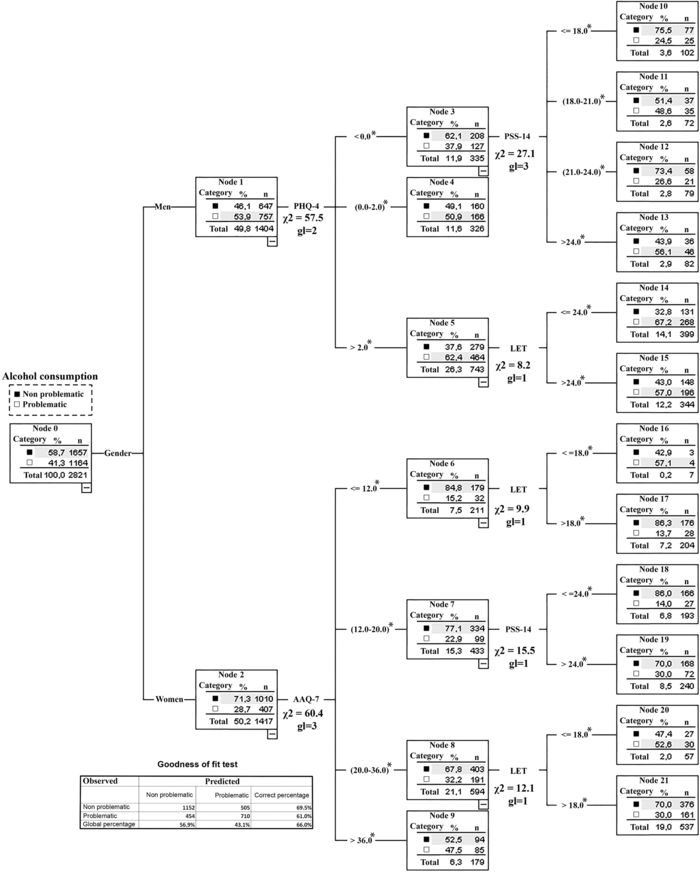 At least one in three students reported problematic consumption and the rate found in men doubles that of women. This gender difference was higher than in other countries, maybe due to sociocultural gender roles differences.13 Interventions in Ecuadorian university students are encouraged in order to prevent the personal and social costs that problematic alcohol consumptions entails.1-3 Problematic alcohol consumption among men was characterized by a higher psychological stress,14 ineffective coping mechanisms focus on avoid aversive thoughts-psychological inflexibility15-, anxious Type A personality, and loneliness.4

Reduce problematic alcohol consumption in men requires promote strategies based on stress reduction and management, social support and value based action like in 12-step programs.

In women, problematic alcohol consumption was strongly associated with psychological inflexibility or ineffective coping mechanism to deal with life circumstances. Women will also benefit from interventions aim to promote the ability to distance oneself from aversive thoughts and emotions, without avoiding the here and now.

Preventive and treatment interventions would be justified both in women and men in Ecuadorian university population. Baseline seems especially severe in men although different cut-offs may be necessary when establishing the problematic consumption level in both sexes.

Given the cross sectional nature of the study, generalization of findings must be viewed with caution. Future research should complete these data with more universities in the country and data collection methods.

The authors wish to thank the National Secretariat of Higher Education, Science, Technology and Innovation (SENESCYT) of the Republic of Ecuador for their support through the Prometeo Project 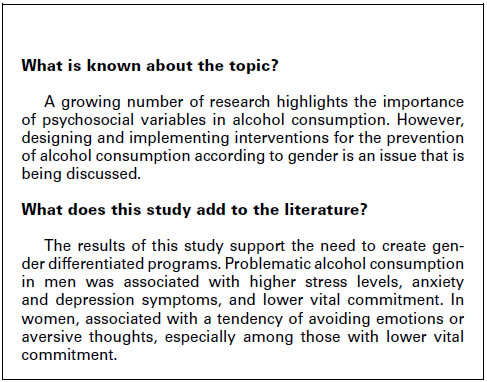 4. Britton PC. The relation of coping strategies to alcohol consumption and alcohol-related consequences in a college sample. Addict Res & Theory. 2004;12:103-14.

11. Wingenfeld K, Schneider A, Brähler E. A 4-item measure of depression and anxiety: validation and standardization of the Patient Health Questionnaire-4 (PHQ-4) in the general population. J Affect Disord. 2010;122:86-95.