Trans-fatty acid content of food products in Spain in 2015

The study was entirely funded by the Spanish Agency for Consumer Affairs, Food Safety and Nutrition.

Objective: To ascertain the content of trans-fatty acids (TFA) in food products in Spain in 2015 and assess trends in TFA content since 2010.
Methods: We analysed the fat content of 277 food products purchased in Spanish supermarkets in 2015 and calculated both the total fat and TFA content and the proportion of TFA to total fats. The results obtained in 2015 were compared to those yielded by a similar study in 2010.
Results: In 2015, the majority of food products studied had a TFA content of less than 0.2 g/100 g product, and a TFA/total fat ratio of less than 2%. No significant increases were found compared to 2010. Food groups with a higher TFA content were dairy products of possible natural origin.
Conclusions: TFA content in Spain is low and has significantly fallen since 2010.

Trans fatty acids (TFA) are unsaturated fatty acids with at least one double bond in the transconfiguration.1 This configuration can come about naturally from ruminant-based meat and dairy products, or artificially through partial hydrogenation of vegetable oils in the food industry and manufacturing processes.1,2

There is scientific evidence to show that TFA intake is associated with cardiovascular diseases in different ways.3,4 In addition, associations between TFA intake and other diseases, such as diabetes mellitus,1,3-5 cancer6 and asthma,7 have also been proposed.

Due to those health risks, it is clear that TFA intake should be as low as possible, and that TFA content in food products should be reduced or eliminated. Some countries have regulated TFA content, such as Denmark, by means of an Order which came into force in 2003.8 In Spain, the 2011 Food Safety and Nutrition Act included a specific provision targeted at reducing artificial TFA in food products.9

Although an important decrease in TFA content and intake has been detected in some countries,10,11 as a result of statutory regulation, health promotion actions and voluntary food-industry initiatives, more efforts are nevertheless called for.

The aim of this study was thus to ascertain the average TFA content of food products in Spain in 2015, and assess time trends in TFA content since 2010 when an earlier study was undertaken.10

To assess the TFA content in Spain, food products were acquired from hypermarkets and supermarkets countrywide.

The most sold food items in each group were selected for a previous study conducted by the Spanish Agency for Consumer Affairs, Food Safety and Nutrition (Agencia Española de Consumo, Seguridad Alimentaria y Nutrición/AECOSAN) in 2010.10 We selected the same products for the purposes of our study, in order to compare TFA content between 2010 and 2015. The methodology used in both the 2010 and 2015 studies was similar.

We measured total fat and TFA content in the selected food items (g/100 g of product). Analytical tests were performed by an independent laboratory accredited by the Spanish National Accreditation Board (Entidad Nacional de Acreditación/ENAC), using gas chromatography with a flame ionization detector for food samples.

Mean and standard deviation were computed for TFA and total fat content in each group of food items. The TFA/total fat ratio was also calculated for each food product and group.

To assess the differences between 2010 and 2015, we compared the mean TFA values (g/100 g of product) and TFA/total fat percentage ratios for those years using the U Mann-Whitney test.

In any case where there was no exact match between 2010 and 2015, the product concerned was excluded from the analysis to ensure the comparability of all groups. 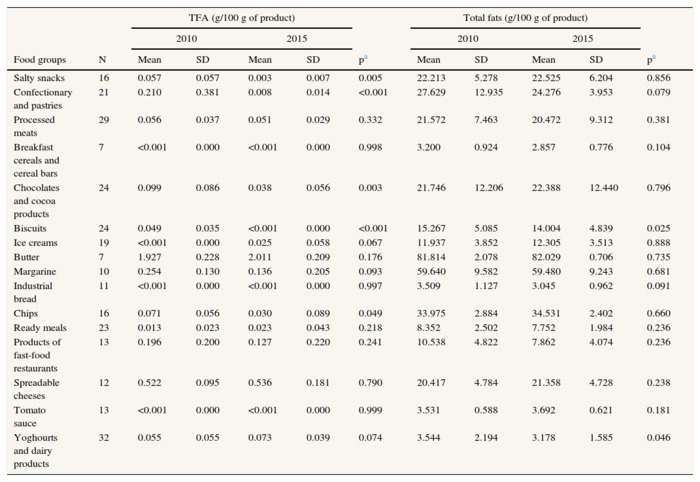 In 2015, the average TFA content was less than 0.2 g/100 g of product across all food groups, with only two exceptions (butter: 2.011 g; spreadable cheeses: 0.536 g). TFA were undetectable in several groups, such as breakfast cereals, biscuits, industrial bread and tomato sauce. Comparison against the 2010 results showed reductions in TFA content in most groups, with some of these decreases proving statistically significant (salty snacks, confectionary and pastries, chocolates, biscuits and chips), and indicated only a few non-significant increases (Table 1).

The average proportion of TFA to total fats in 2015 was lower than 2% across all food-product groups, except yoghourts and dairy products (2.30%), butter (2.45%) and spreadable cheeses (2.52%), as shown in Table 2. Non-significant increases were found and there were some significant reductions in salty snacks, confectionary and pastries, chocolates, biscuits, and chips. 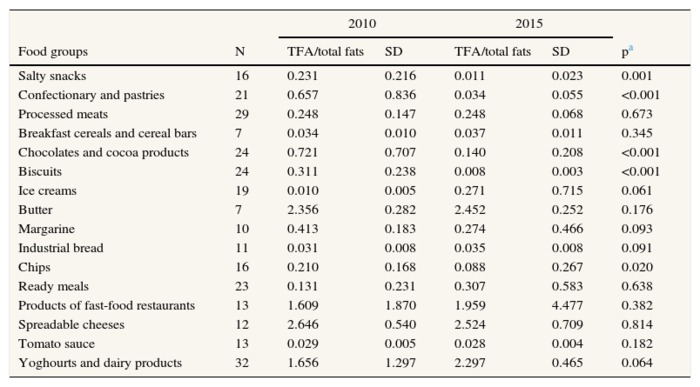 There is solid scientific evidence to show an association between TFA intake and cardiovascular diseases. A reduction in TFA content in food products and TFA intake should thus be recommended. While TFA content in Spain was reported to be high by a number of studies,2,12 one study suggested that in 2010 TFA content had been reduced in the majority of the food groups studied.10

This study confirms the situation found five years previously. The comparison between TFA content in 2010 and 2015 showed that there had been no significant changes. In some groups, such as breakfast cereals, industrial bread and tomato sauce, TFA were undetectable, and in other groups, significant reductions were even found (salty snacks, confectionery and pastries, chocolates, biscuits, chips). Some food groups displayed slight, non-significant increases but the magnitude of the content was so low as to be of no concern.

Insofar as TFA of natural origin is concerned, some studies have postulated that such TFA are not associated with cardiovascular diseases and, indeed, might even have some health benefits.13 More studies are needed to address this issue.

Following the Danish initiative, some laws in Europe (including the Spanish Food Safety and Nutrition Act) and the USA have sought to reinforce the reduction in TFA content in the case of food products.8,11,14 In June 2015, the US Food and Drug Administration (FDA) finalized its determination whereby food manufacturers were ordered to remove TFA from their products in 2018. A combination of statutory regulations and voluntary actions would appear to be the most advisable strategy.15

The social responsibility of food manufacturers in Spain warrants a special mention. The food industry has made remarkable efforts to reduce TFA since the consequences to health became known.

The main strength of this study is its strict methodology which successfully ensured comparability of the results obtained in 2010 and 2015.

One limitation might lie in the fact that the selected food-product sample belonged to leading consumer brands enjoying widespread distribution, whereas there are also other locally distributed, lower-impact brands which may have been overlooked by the study. Subsequent assessments are called for.

The main conclusion of our study is that the average TFA content of food products in Spain is low, and that in the context of a balanced diet, exposure to TFA should thus be minimal. Although it cannot be stated with certainty in the absence of data on TFA intake, it is safe to assume that, where exposure is low, the average intake in Spain would likewise be low. Nonetheless, regular surveillance of the TFA content of food products should be maintained. By way of a public health goal, reformulation of food products must be reinforced in order to ensure that the nutritional quality of food is improved.

All authors conceived and designed the study, collaborated in the analysis and interpretation of results, and reviewed and approved the final version of the manuscript. N. Pérez-Farinós wrote the article and was chiefly responsible for the methodological aspects and analysis of the data. 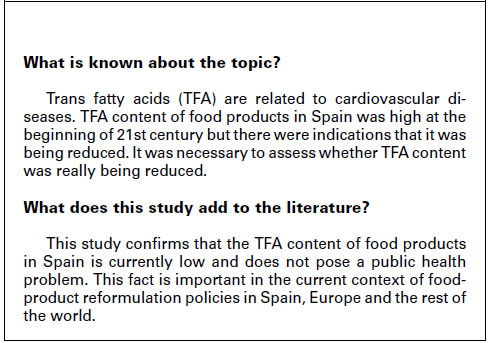 5. De Souza RJ, Mente A, Maroleanu A, et al. Intake of saturated and trans unsaturated fatty acids and risk of all cause mortality, cardiovascular disease, and type 2 diabetes: systematic review and meta-analysis of observational studies. BMJ. 2015;351:1-16.