Trends in cancer mortality in Spain: the influence of the financial crisis

To determine if the onset of the economic crisis in Spain affected cancer mortality and mortality trends.

We conducted a longitudinal ecological study based on all cancer-related deaths and on specific types of cancer (lung, colon, breast and prostate) in Spain between 2000 and 2013. We computed age-standardised mortality rates in men and women, and fit mixed Poisson models to analyse the effect of the crisis on cancer mortality and trends therein.

Since the onset of the economic crisis in Spain the rate of decline in cancer mortality has slowed significantly, and this situation could be exacerbated by the current austerity measures in healthcare.

The impact of an economic crisis on health depends on various factors.11. Cortès-Franch I, González López-Valcárcel B. The economic-financial crisis and health in Spain. Evidence and viewpoints. SESPAS report 2014. Gac Sanit. 2014;28 Suppl 1:1-6. 22. Quaglio G, Karapiperis T, Van Woensel L, et al. Austerity and health in Europe. Health Policy (New York). 2013;113:13-9. While economic crises have adverse effects on both the determinants and inequalities of health,33. Pérez G, Rodríguez-Sanz M, Domínguez-Berjón F, et al. Indicators to monitor the evolution of the economic crisis and its effects on health and health inequalities. SESPAS report 2014. Gac Sanit. 2014;28 Suppl 1:124-31. 44. Bacigalupe A, Escolar-Pujolar A. The impact of economic crises on social inequalities in health: what do we know so far? Int J Equity Health. 2014;13:52. they can in fact provide an opportunity to promote primary prevention healthcare measures.55. Martin-Moreno JM, Alfonso-Sanchez JL, Harris M, et al. The effects of the financial crisis on primary prevention of cancer. Eur J Cancer. 2010;46:2525-33.

History has already shown that economic crises can be accompanied by an increase in mortality, particularly among certain population subgroups, such as children.66. Falagas ME, Vouloumanou EK, Mavros MN, et al. Economic crises and mortality: a review of the literature. Int J Clin Pract. 2009;63:1128-35. 77. Segura Benedicto A. Cuts, austerity and health. SESPAS report 2014. Gac Sanit. 2014;28 Suppl 1:7-11. Within the European Union for instance, a reduction in public spending on healthcare during times of crisis has been found to be associated with increased mortality.88. Budhdeo S, Watkins J, Atun R, et al. Changes in government spending on healthcare and population mortality in the European Union, 1995-2010: a crosssectional ecological study. J R Soc Med. 2015;108:490-8. Interestingly, some studies have not observed an increase in overall mortality, but rather an increase in the number of suicides,99. Coope C, Gunnell D, Hollingworth W, et al. Suicide and the 2008 economic recession: who is most at risk? Trends in suicide rates in England and Wales 2001-2011. Soc Sci Med. 2014;117:76-85.

The most recent economic crisis began to affect Spain in 2008, and a recent study analysed the effect that this crisis had on both general mortality and some specific causes.2121. Regidor E, Vallejo F, Granados JAT, et al. Mortality decrease according to socioeconomic groups during the economic crisis in Spain: a cohort study of 36 million people. Lancet. 2016;6736:1-11. This study found that overall mortality was declining before the onset of the crisis (2004-2007), and that the same trend continued during the subsequent years (2008-2011), particularly among disadvantaged socioeconomic groups. These two periods also saw a lower number of cancer-related deaths, especially in men, although this study only analysed data until 2011, and did not distinguish between the different types of cancer.

In response to the 2008 crisis in Spain, the Spanish government activated various economic adjustment procedures, including healthcare reform encompassing a set of legislative measures aimed at cutting health expenditure. This reform, brought into action by the approval of Royal Decree Law 16/2012, was a key health austerity measure.77. Segura Benedicto A. Cuts, austerity and health. SESPAS report 2014. Gac Sanit. 2014;28 Suppl 1:7-11. 2222. Repullo JR. Changes in the regulation and government of the health system. SESPAS report 2014. Gac Sanit. 2014;28 Suppl 1:62-8. 2323. Cimas M, Gullón P. Dos años de reforma sanitaria: más vidas humanas en riesgo. Médicos del Mundo. 2014. However, the effect of the economic crisis in Spain has been heterogeneous with respect to the different autonomous communities, which may be because each region has some control over how social cuts are implemented.2424. Pérez G, Gotsens M, Palència L, et al. Study protocol on the effect of the economic crisis on mortality and reproductive health and health inequalities in Spain. Gac Sanit. 2016;30:472-6.

We conducted a longitudinal study of the period 2000 to 2013, with 2008 considered as the year the economic crisis started, and the study population consisted of all residents in Spain during 2000 to 2013. We collected information from the Spanish Mortality Registry, a resource based on the Statistical Bulletin of Deaths, and from the ongoing population census. We analysed all deaths caused by cancer in general (CIE-10: C00-C96), as well as those caused by four specific types of malignant neoplasm: colon (CIE-10: C18), bronchus and lung (CIE-10: C34), breast (CIE-10: C50), and prostate (CIE-10: C61). For our analysis, we considered the following variables: year of death, age at death, gender, autonomous community, and cause of death.

We performed a descriptive analysis of the population according to the number of deaths caused by each of the types of cancer in men and women for each year of the study period. We then estimated annual mortality rates for all cancers, individually for lung and colon cancer in both sexes, for prostate in men, and for breast cancer in women. Rates were standardised by age using the direct method in which the reference population was the Spanish population of 2001. Data were also represented graphically to visibly highlight the trends.

Finally, we constructed mixed Poisson models to analyse the effect of the crisis on mortality, including its general trends both before and during the crisis (see Model 1; where I = autonomous community, and t = year). We accounted for the variability between autonomous communities by including random effects in the constant and coefficients of the variables for crisis (dichotomous variable taking value 0 for 2000-2007, and 1 for 2008-2013) (b1i), year (b2i), and the interaction between crisis and year (b3i). Using our model, we determined the relative risk (RR) for each type of cancer by estimating the differences in mortality between the first year of the crisis (2008) and the last year before the onset of the crisis (2007; RR crisis; 95%CI). Finally, to evaluate annual trends in mortality, we determined the relative risks for the pre-crisis (RR pre-crisis years; 95%CI) and crisis (RR crisis years; 95%CI) periods.

Between 2000 and 2013, cancer mortality as a whole decreased, especially in men (Figure 1). However, we observe an upward trend in the most common cancer types, especially colon cancer in men, and lung cancer in women.

Our results are consistent with a previous report on overall cancer mortality in Spain during the 2004-2011 period,2121. Regidor E, Vallejo F, Granados JAT, et al. Mortality decrease according to socioeconomic groups during the economic crisis in Spain: a cohort study of 36 million people. Lancet. 2016;6736:1-11. but encompass a larger time frame (2000-2013) and include an evaluation of specific cancers with higher mortality rates.

The trends observed in Spain are similar to those reported in Greece, where cancer mortality has continued to decline since the onset of the crisis.1919. Vrachnis N, Vlachadis N, Salakos N, et al. Cancer mortality in Greece during the financial crisis. Acta Oncol (Madr). 2015;54:287-8. One of the reasons for this continued decline is that the Greek public health system continued to function effectively despite cuts imposed by the government in response to the crisis. Although there are some differences between the Greek and Spanish health systems, they are both public systems2525. Ministerio de Sanidad, Servicios Sociales e Igualdad. Subdirección General de Información Sanitaria e Innovación. Los sistemas sanitarios en los países de la UE: características e indicadores de salud. Madrid; 2013. that provide full access to healthcare services and thereby buffer the influence of unemployment and reduced healthcare expenditure on increased cancer mortality during times of crisis.1515. Maruthappu M, Watkins J, Noor AM, et al. Economic downturns, universal health coverage, and cancer mortality in high-income and middle-income countries, 1990-2010: a longitudinal analysis. Lancet. 2016;6736:1-12. In Spain, however, there was a change in this trend −the rate of decline in cancer mortality decreased with the onset of the crisis.

In countries where healthcare cuts affect screening programs, cancer mortality is expected to increase in the coming years.5252. Tsounis A, Sarafis P, Alexopoulos EC. Austerity and its consequences on cancer screening in Greece. Lancet. 2014;384:2110. Thus, it is essential that that the implementation and continuity of cancer screening programs in Spain are not affected by healthcare cuts.

Despite the negative consequences, periods of economic crisis can actually help promote primary cancer prevention by reducing unhealthy habits such as alcohol and tobacco consumption.55. Martin-Moreno JM, Alfonso-Sanchez JL, Harris M, et al. The effects of the financial crisis on primary prevention of cancer. Eur J Cancer. 2010;46:2525-33. 2121. Regidor E, Vallejo F, Granados JAT, et al. Mortality decrease according to socioeconomic groups during the economic crisis in Spain: a cohort study of 36 million people. Lancet. 2016;6736:1-11. One of the limitations of our study is that we did not evaluate health-related behaviours, socioeconomic variables or cancer stage at diagnosis time which are also often modified during times of economic crisis and can influence the appearance and severity of cancer. Because this information is not available in the Spanish Mortality Registry, it would be useful to investigate these variables in future studies to determine if they are linked to the gender differences observed in our study.

While cancer mortality has continued to decline since the onset of the crisis, its effects on cancer could be slow to appear. Consequently, another limitation of our study is that we analysed a post-crisis period of five years, which may be insufficient to detect major changes in mortality. In addition, given the latency periods of these cancers studied, their effects may appear in the next years. Thus, it would be useful to continue monitoring trends in cancer mortality in the coming years in conjunction with the evolution of the economic crisis.

In conclusion, our study demonstrates an overall downward trend in cancer mortality both before and after the onset of the economic crisis, but with a notable slowing down in the rate of decline since the crisis began. For lung cancer, there was a downward trend in men but an upward trend in women, while for colon cancer the trends are reversed and less pronounced. With respect to prostate and breast cancer, the onset of the crisis caused a slight slowing of their previous decline in men and women, respectively. These trends could change if the current austerity measures are maintained during the coming years, which would cause significant deterioration of the Spanish public healthcare system. Abolishing current austerity measures will be crucial in preventing a rise in cancer mortality in the future.

What is known about the topic?

Increased unemployment along with lower investment in the public health sector are known to be associated with an increase in total cancer mortality, particularly of breast, colon, prostate and lung cancer. However, there are a limited research on economic crises and cancer mortality.

What does this study add to the literature? 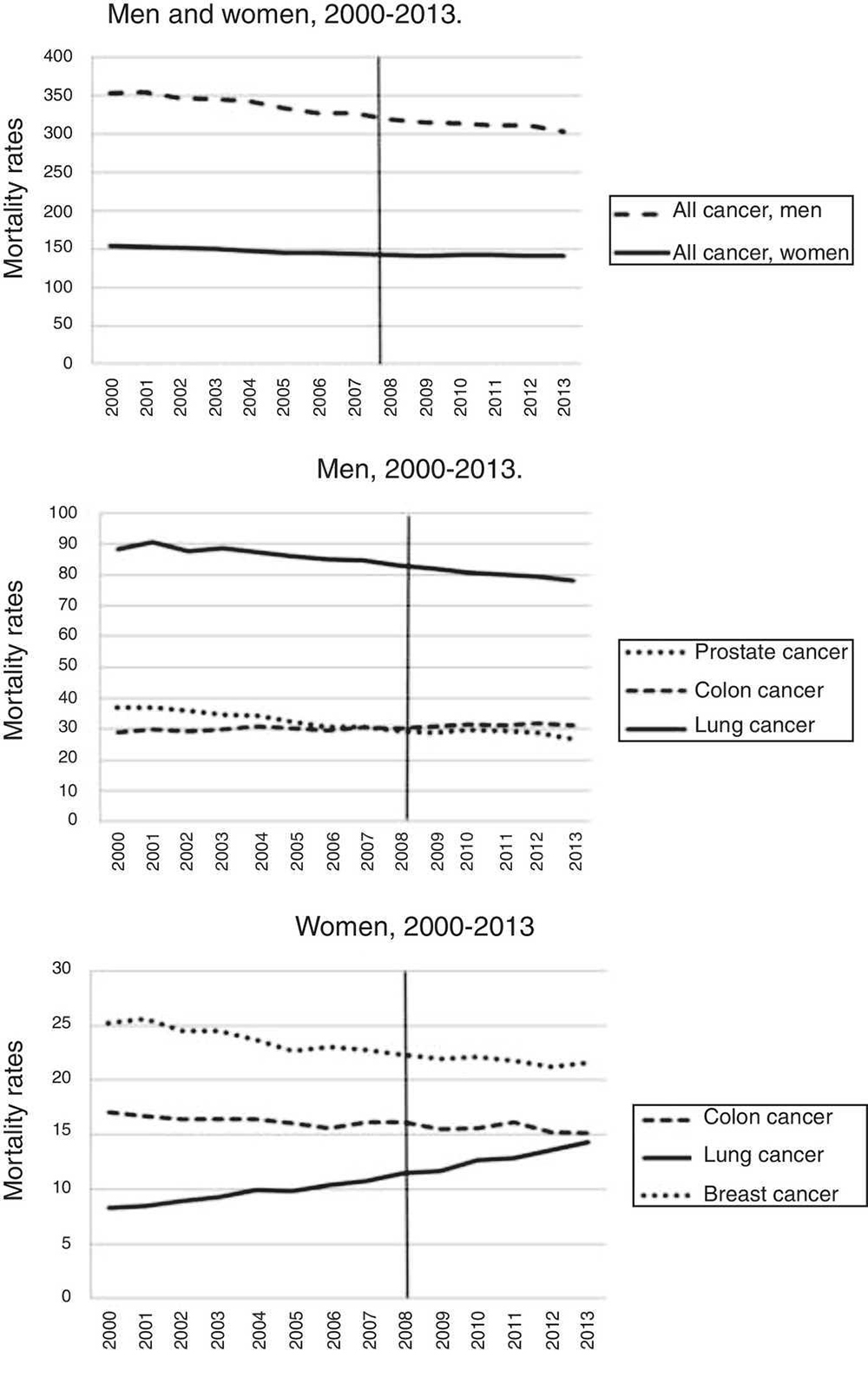 SciELO Analytics
Dimensions
Trends in cancer mortality in Spain: the influence of the financial crisis
PlumX