Institutionalization of health impact assessment: a matter of equity in public health

Health impact assessment (HIA) is promoted by the World Health Organization in order to identify and address health co-benefits and risks, as well as measures to improve health and reduce health inequities. At a European level, health issues have been featured in European treaties since the formation of the European Union and governments are expected to promote health equity. Essential values underlying HIA (e.g. equity, democracy, transparency) which are required to be believed in their relevance by practitioners and decision makers must be taken into account.11. Bacigalupe A, Esnaola S, Calderón C, et al. La evaluación del impacto sobre la salud: una herramienta para incorporar la salud en las intervenciones no sanitarias. Gac Sanit. 2009;23:62-6. Currently, HIA is not a legal requirement in the European Union and implementation and institutionalization are incomplete in all concerned countries.22. Green L, Gray BJ, Edmonds N, et al. Development of a quality assurance review framework for health impact assessments. Impact Assess Project Appraisal. 2019;37:107-13. Despite the growing policy concerning and activity aimed at institutionalizing HIA, the majority of HIAs are done voluntarily, outside legislative or regulatory requirements.33. Tarkowski S, Ricciardi W. Health impact assessment in Europe - current dilemmas and challenges. Eur J Public Health. 2012;22:612. In Spain, the National Public Health Act 2011 incorporated HIA to the Spanish legal system 8 years ago.

The incorporation of HIA to the Spanish legal system was deemed positive in technical and scientific environments. However, Spain is a decentralized state and most policies (e.g. health governance) are based in the gradual development of federal arrangements through its regional governments, also known as Autonomous Communities.44. Agranoff R. Federal evolution in Spain. Int Political Sci Rev. 1996;17:385-401. Despite multijurisdictional countries are supposed to facilitate better matching of citizen preferences, sometimes, there is a lack of basic common rules at a national level. On a regional level, HIA has been institutionalized in only one out of 17 autonomous communities (as is the case of Andalusia). On the other hand, HIA is also mentioned in regional Public Health Laws in the Autonomous Communities of Catalonia, Valencia, the Balearic Islands, Aragon and Galicia (Fig. 1). However, there has not been further regulatory development of HIA in these last Autonomous Communities, where only some pilot HIAs have been conducted, mostly in urban planning, as well as within the Basque country. In short, Andalusia is leading the implementation of HIA in Spain, and more than 700 HIAs have been conducted in different activity sectors between the years 2015 and 2018 in Andalusia.

The authors thank Rebeca López Gosling that kindly improved the English of the manuscript.

The authors declare that they have no conflicts of interest. 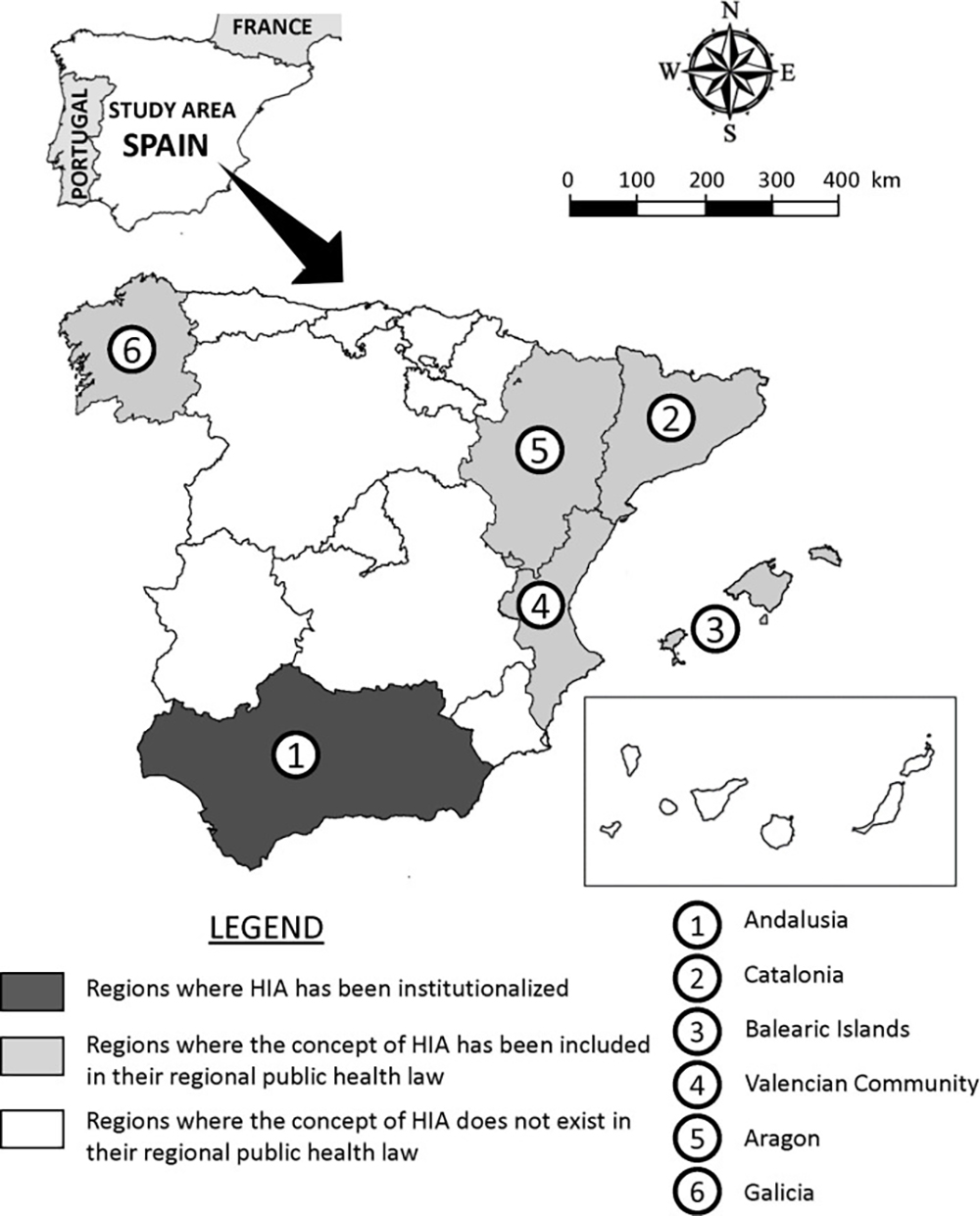