The initial high level of compliance with the Chilean comprehensive national smoke-free law in 2013 is fading, particularly in the hospitality sector. This paper draws attention to how using a simple and low-cost surveillance inquiry may help focus on the use of scarce inspection resources to improve compliance with the law in the hospitality sector. We conducted a cross-sectional assessment of second-hand smoke exposure in night entertainment venues in Santiago, Chile, by measuring particulate matter of less than 2.5 µm (PM2.5). Smoking where prohibited by law was observed in 36% of the venues visited. Venues where smoking was spotted at the time of the observation had a median PM2.5 concentration 13 times higher than background concentration on the street. The study shows that a targeted approach for inspection to find pockets of venues with suboptimal compliance is feasible and affordable.

The enforcement efforts during the year following the entry into force of the current smoke-free legislation led to a high compliance with the law, overall and in the hospitality sector,22. World Health Organization. Report on the global tobacco epidemic 2015. Geneva: World Health Organization; 2015. 103 p. which was associated with a sudden and significant decline of myocardial infarction in 2014.33. Nazzal C, Harris J. Lower incidence of myocardial infarction after smoke-free legislation enforcement in Chile. Bull World Health Organ. 2017;95:674-82. These efforts included a surge of inspections in 17,406 of the approximately 40,000 existing venues in the hospitality sector in the country.44. DEIS. Actividades de la Autoridad Sanitaria (SEREMI) registradas en el sistema Rakin. Años 2011-2017. Santiago (Chile): Departamento de Estadísticas e Información de Salud. (Accessed 18/03/2020.) Available at: http://www.deis.cl/estadisticas-seremi/.
http://www.deis.cl/estadisticas-seremi...

Presently enforcement efforts in Chile are fading. By 2016, last year for which governmental enforcement information is available, smoke-free law inspections in hospitality venues were cut in half (8196) while the number of annual public health control activities was in that year similar to that of 2013.44. DEIS. Actividades de la Autoridad Sanitaria (SEREMI) registradas en el sistema Rakin. Años 2011-2017. Santiago (Chile): Departamento de Estadísticas e Información de Salud. (Accessed 18/03/2020.) Available at: http://www.deis.cl/estadisticas-seremi/.
http://www.deis.cl/estadisticas-seremi... Moreover, the WHO reported that, compared to 2014, the compliance with the smokefree law in the hospitality sector in 2018 remained substantial but had declined.55. World Health Organization. Report on the global tobacco epidemic 2019. Geneva: World Health Organization; 2019. 209 p. These data raise questions about how enforcement of the Chilean smoke-free law can be improved. This paper draws attention to how using a simple and low-cost surveillance inquiry may help focus the use of scarce inspection resources to improve compliance with the law in the hospitality sector.

We suspected that there remained significant pockets of noncompliant places in the hospitality sector, where venues are expected to be less compliant, based on previous international evidence.66. International Agency for Research on Cancer. Handbooks of cancer prevention, tobacco control, volume 13. Evaluating the effectiveness of smoke-free policies. Lyon Cedex: IARC; 2009. 335 p. Within the hospitality sector, we assumed that the venues most likely to be non-compliant would be those catering to young adults and operating outside regular office hours in which inspectors are much less likely to conduct routine inspections.

We conducted a cross-sectional exposure assessment of night entertainment venues in two well-known areas of concentration of this commercial activity in the Greater Santiago, Chile, in November 2018. Eligible venues were establishments making their revenue mostly from the sale of beverages, including alcoholic drinks, although customers may also consume small dishes and appetizers. Venues included bars, pubs, cabarets, night-clubs, and discos, opened at least between 00:00 and 3:00 on Fridays, Saturdays, and Sundays.

To identify potential participating venues, a sampling frame of establishments was constructed, based on information provided by students of our university or available on the internet. We listed a total of 128 potential venues, of which we selected randomly 30. In each selected venue, we measured levels of respirable particles ≤2.5 µm in diameter (PM2.5), a well-established marker of tobacco smoke.77. Fu M, Martínez-Sánchez J, Galán I, et al. Variability in the correlation between nicotine and PM2.5 as airborne markers of second-hand smoke exposure. Environ Res. 2013;127:49-55. We used three TSI SidePak AM510 Personal Aerosol Monitors, hand-held optical instruments that monitor particle size and mass concentration in real-time. They were set to a one-second sampling interval. The three monitors were previously calibrated in an experiment with a gravimetric BAM-1020 instrument that measures and records airborne particulate concentration levels using the principle of beta-ray attenuation. The calibration factors derived from the experiments were 0.37, 0.39, and 0.39 for each of the monitors.

Six trained observers entered incognito each venue in pairs and sampled the air for at least 30 minutes, moving discreetly around the public areas of the establishment, avoiding getting too close to active sources of particulate matter, such as people actively smoking or kitchen entrances if there were any. Observers recorded if there was any tobacco smoking at the time of the visit. The total number of smokers could not be recorded, given that many venues were very dimly lighted, and not all areas of the venues could be visited without being noticed or causing security concerns. Only the data from 25 of the 30 selected venues are reported because the data from four venues were not logged-in appropriately, and the data from one was discarded since the air was contaminated with stage fog, which raised the level of particulate matter spuriously. The air from streets surrounding each of the venues was also sampled concurrently for about 20 minutes to set the background PM2.5 concentration for comparison purposes.

We used boxplots to describe medians (M) and interquartile ranges (IQR) of PM2.5 concentration (µg/m3) in the venues, overall and stratified by selected characteristics. We compared median PM2.5 concentration by these characteristics and with background levels using non-parametric Kruskall-Wallis and U-Mann Whitney tests, at a 5% significance level.

Thumbnail
Figure 1.
Distribution of PM2.5 concentration (µg/m3), on a logarithmic scale, by type of venue compared to baseline street levels.

We also compared the median PM2.5 concentration in venues where dancing is their signature activity, such as discotheques and nightclubs, with that in the rest of venues. Compared to the street, the median value of PM2.5 was three times higher in bars and similar venues (m = 27 µg/m3; IQR: 10-78 µg/m3) and more than five times higher in disco and night club venues (m = 47 µg/m3; IQR: 19-165 µg/m3) (all p values < 0.001).

Chile introduced a comprehensive smoke-free law when the smoking prevalence was still high (>35%) compared to when other countries introduced similar national or subnational laws that were almost self-enforcing. Countries with higher smoking prevalence, although having reasonable overall compliance with smoking bans, tend to have more compliance issues88. Perkins R, Neumayer E. Adoption and compliance in second-hand smoking bans: a global econometric analysis. Int J Public Health. 2014;59:859-66. in some sectors or pockets of venues, particularly in the hospitality sector. Hence the importance of an effective enforcement infrastructure and effort.

The results of our approach show that finding pockets of venues with suboptimal compliance is possible. In the case of Chile, we were able to point out the night entertainment venues not only as a type of business with a significant proportion of noncompliant venues (36%), but also with harmful levels of PM2.5, 13 times above the background street levels. WHO Air Quality Guidelines consider that long-term breathing of air with PM2.5 concentration above 10 µg/m3 (annual outdoor average) significantly increases the mortality of exposed persons.99. World Health Organization. Air quality guidelines - global update 2005. Geneva: WHO; 2005. 484 p.

The same approach can be followed to find additional pockets of non-compliance. For example, anecdotal evidence points to the need for finding such pockets in higher education institutions and small-size workplaces, or among specific administrative subnational jurisdictions.

Until now, a massive effort to inspect all types of venues in the hospitality sector has had limited results in decreasing the self-reported proportion of exposure to second-hand smoke at workplaces.1010. MINSAL. Encuesta Nacional de Salud 2016-2017: primeros resultados. Santiago (Chile): Ministerio de Salud Pública. (Accessed 18/03/2020.) Available at: https://www.minsal.cl/wp-content/uploads/2017/11/ENS-2016-17PRIMEROS-RESULTADOS.pdf.
https://www.minsal.cl/wp-content/uploads... However, this study shows that a simple and affordable approach -the cost of this study, personnel expenses, and entry fees to venues, was approximately USD 700- targeting clusters of venues at high risk for violation of the smoke-free law may improve the use of scarce local inspection time and resources.

Thumbnail
Figure 1.
Distribution of PM2.5 concentration (µg/m3), on a logarithmic scale, by type of venue compared to baseline street levels.

Figure 1.   Distribution of PM2.5 concentration (µg/m3), on a logarithmic scale, by type of venue compared to baseline street levels. 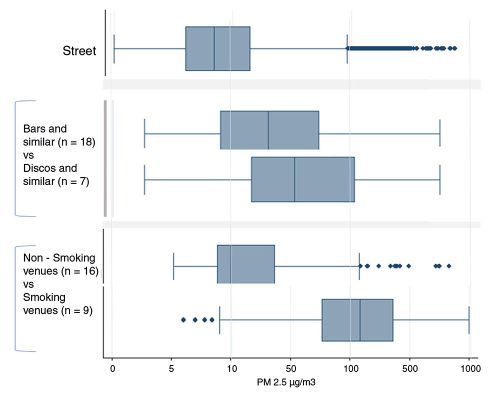