Cardiovascular disease is the main cause of death for diabetics, and in many cases its presence is silent due to cardiac autonomic neuropathy. Thus, early diagnosis of coronary disease is essential, permitting proper risk stratification and appropriate therapy. This paper examines the usefulness of several noninvasive imaging techniques to study cardiovascular diseases in individuals with diabetes mellitus, with emphasis on nuclear cardiology, and proposes a diagnostic algorithm for detection of silent ischemia.

In 2000, global estimates indicated 171 million people had diabetes mellitus (DM), projected to reach 366 million by 2030.[1] As DM evolves, it produces endothelial dysfunction and changes in energy metabolism that lead to atherosclerosis in medium- and large-caliber arteries, creating lesions in coronary, cerebrovascular and peripheral arteries. In diabetics, atherosclerotic plaque tends to develop earlier, evolve more quickly and be more diffuse. All these factors contribute to DM patients having two to four times greater risk of a cardiovascular event than nondiabetics, with cardiovascular disease (CVD) being the main cause of death in these patients.[2] In 2008, WHO reported a combined mortality rate from CVDs and DM of 245 per 100,000 population for adults aged 30 to 70 years.[3]

Cardiac mortality for diabetics with no known coronary disease is the same as that for non-diabetics with a history of acute myocardial infarction, which is why clinical guidelines consider diabetics at high risk for CVD.[2]

Presence of cardiac autonomic dysfunction, common in diabetics,[4] is a factor that influences the frequently silent appearance of myocardial ischemia. Hence the importance of identifying individuals with high risk for cardiovascular events, even prior to symptom onset. DM also affects vascular endothelium, causing endothelial dysfunction.[5] The American Diabetes Association[6] therefore recommends performing stress tests on asymptomatic diabetics who present a minimum of two additional risk factors (such as hypertension, dyslipidemia and smoking). This approach, however, is still controversial.

How can silent ischemia be detected in diabetics? The first step in diagnosing silent ischemia in asymptomatic DM with two or more additional risk factors is a stress test,[7] whether with a treadmill or bicycle ergometer.

Ergometry provides valuable functional resultsnot only for detecting ischemia, but also for assessing functional capacity, as well as behavior of arterial pressure and arrhythmia on exertion.[7] Its availability and utility make it the first option for patients without diabetic neuropathy who are able to do physical exercise.

In patients with low functional capacity, imaging techniques such as echocardiography or myocardial perfusion scintigraphy (MPS) are more helpful, since they have acceptable sensitivity and specificity, and allow pharmacological stressors (dobutamine in echocardiogram; dipyridamole or dobutamine in MPS) to substitute for physical exercise.[812] An alternative for patients able to do physical exercise would be a stress MPS, which combines data from a stress ECG and functional capacity with that from an MPS.

MPS with single-photon emission-computed tomography (SPECT) is a validated nuclear medicine technique for obtaining functional information about the heart by demonstrating myocardial ischemia. If images are synchronized with ECG (gated SPECT or gSPECT), a single study can provide data on myocardial perfusion as well as intraventricular synchronism and ventricular function (left ventricular ejection fraction and systolic wall thickening, which permit assessment of segmental wall-motion abnormalities).[10] gSPECT can be extremely useful in diagnosis and risk stratification in patients with CVD. Nuclear cardiology techniques have been used in Cuba since the 1980s and are currently available free of cost to patients in several tertiary care centers.

Two other imaging techniques, although not used in the same way as echocardiography and MPS to detect ischemia, provide complementary data useful for diagnosis. The first is the coronary calcium score obtained through computed axial tomography (CAT);[11,12] it quantifies calcium in coronary arteries and is therefore an indicator of CVD, although since it provides structural rather than functional information, it cannot detect ischemia. The second method is measurement of endothelial function, which can be assessed in the brachial artery by using ultrasound to measure flow-mediated endothelium-dependent vasodilation, as described by Celermajer.[13] Marcus[14] found that impairment of endothelium-dependent vasodilation in coronary resistance vessels (<450 µm in diameter) may be associated with perfusion abnormalities in diabetics, even in the absence of stenotic lesions in epicardial coronary arteries, suggesting the presence of microvascular CVD. This test is more widely available, since it requires only ultrasound equipment and an echocardiographer trained in the technique.

There are several different algorithms for detection of silent ischemia in diabetic patients. The experience of our working group at Cuba's cardiology and endocrinology institutes is reviewed below. All data have been published previously as cited.

As part of multicenter research coordinated with the International Atomic Energy Agency, we studied a group of 59 diabetic patients, comparing them with a control group of 42 participants (who were not diabetic but had coronary risk factors) to detect silent ischemia through MPS, coronary calcium score and endothelial function assessment.[15]

These results are supported by the findings of Papaioannu,[5] who used ultrasound to measure endothelium-dependent and independent vasodilation in the brachial artery in a subgroup of 75 asymptomatic diabetics in the Detection of Ischemia in Asymptomatic Diabetics (DIAD) study; it was determined that >8% endotheliumdependent vasodilation had a negative predictive value of 93% for CVD.

Perfusion abnormalities have been detected in a relatively high percentage (25%50%) of asymptomatic diabetics in different series.[16,17] Two studies have been conducted in Cuba to date using gSPECT: one by Peña,[18,19] which included 220 patients and found ischemia in 29.1%; and the second by Peix,[15] that found 33% of patients with DM had ischemia versus 16% of those without (p = 0.04). Figure 1 presents an example of a diabetic patient with silent myocardial ischemia diagnosed by gSPECT. 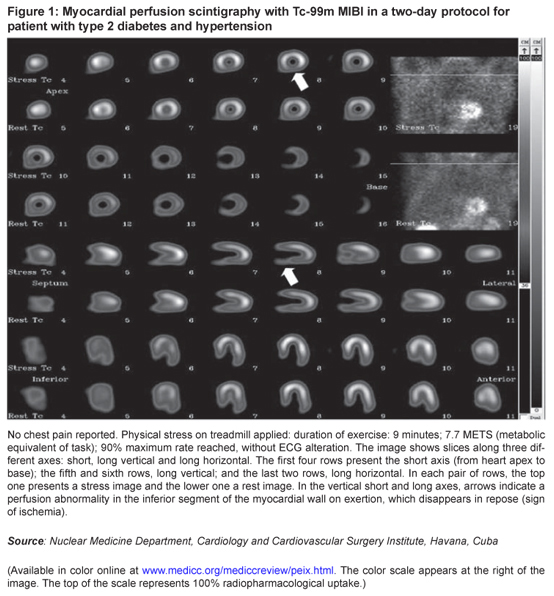 To date, MPS has been used in only two other studies to examine prevalence of ischemia in asymptomatic diabetics: the DIAD study[4] and that of Scholte,[20] which detected ischemia in approximately 20% and 33% of cases, respectively, independent of the number of risk factors. However, unlike the Peix study, neither of these used physical exercise as a stressor or had control groups.[15]

Presence of coronary calcium is associated with risk of cardiac events, with 199 Agatston units indicating low risk; 100400, moderate risk; and >400, high risk.[21] A prospective study by Anand[11] followed a two-stage strategy: a calcium score was derived for all patients through multislice CAT scan, followed by gSPECT for those who scored >100 Agatston units and for a random sample of those with scores of <100. Some 32% of MPS showed perfusion abnormalities corresponding to ischemia. Scintigraphic abnormalities diagnostic of ischemia were present in 23% of patients with Agatston scores of >100, 48% of those with scores of >400 and 71% of those with scores of >1000. The authors found that the more diffuse the ischemia the worse the clinical evolution; that the calcium score was better than established risk factors at predicting silent ischemia and cardiac events in persons with DM; and that a coronary calcium score of 0 to 10 Agatston units was associated with normal scintigraphy and excellent prognosis.[11]

In the Peix study, coronary calcium levels in diabetic patients averaged 74 Agatston units compared to 5 in controls (p = 0.01).[15] Eight diabetics had calcium scores of >100, which in only three cases coincided with presence of perfusion abnormalities on MPS. In two studies in Japan and Israel using CAT scans to compare asymptomatic diabetic with nondiabetic patients,[22,23] prevalence of coronary plaques was 80% to 93% in asymptomatic diabetics, and significant coronary stenosis was more prevalent in diabetics than in the control group. Scholte[24] found that 41% of plaques were not calcified, thus undetectable by calcium scoring, while Raggi[12] found coronary artery calcification in 40% of diabetics. An appropriate approach for these patients could be the combination of both tests: coronary calcium score and myocardial perfusion scintigraphy, thus providing important complementary data.

The two-stage strategy (calcium score followed by perfusion scintigraphy for patients with scores of >100) combines both types of data: structural (through coronary calcium) and functional (through MPS-detected ischemia). However, even this should be viewed with caution because, while more useful in cases of calcified epicardial coronary lesions, this approach could miss noncalcified soft plaques and microvascular angina. Microvascular angina is a diagnosis of exclusion once ischemia is detected in a patient with typical angina and normal epicardial coronary arteries. Missing the presence of noncalcified soft plaques, and so excluding MPS, would be a drawback of this strategy. Presence of DM in addition to peripheral vascular diseases, carotid disease, peripheral neuropathy, autonomic dysfunction, family history of CVD or renal insufficiency confers additional risk and reinforces the need for testing to detect ischemia; we therefore recommend performing MPS in such cases, even if the calcium score is less than 100.

Peña[18,19] found that alterations in lipids, fasting blood sugar, hypertension, smoking and family history of heart disease increased risk of a positive gSPECT two- to five fold. An LDL level of >100 mg/dL was the variable conferring greatest estimated risk, while an HDL level of <44 mg/dL was the most important standardized variable when several factors were present.

Another interesting aspect that can be evaluated through nuclear techniques is cardiac autonomic innervation, which is frequently impaired in individuals with DM; such impairment constitutes an independent marker of poor prognosis, probably due to increased rates of sudden death from malignant ventricular arrhythmia. The most common method is SPECT scintigraphy with metaiodobenzylguanidine, a norepinephrine analogue, labeled with iodine-123 (123I). Patients with DM and cardiac autonomic neuropathy have reduced myocardial metaiodobenzylguanidine uptake, which has been associated with long-term adverse cardiovascular events.[25]

After completion of the DIAD study and publication of its five-year results,[4,26,27] although screening did not have an impact on adverse cardiac events overall, it was useful in classifying patients as high risk (moderate-to-severe abnormalities and ischemia on stress ECG) and low risk (small defects or normal perfusion). Hence it would be preferable to test for ischemia more selectively rather than testing all diabetics.

We suggest that asymptomatic patients who have had DM for at least five years and are able to do physical exercise take an ergometric test every two years to detect silent ischemia. For those with inconclusive ergometry and two risk factors in addition to DM, we suggest including an endothelium-dependent vasodilation test and coronary calcium score prior to performing an imaging stress test (either stress echocardiography or MPS).

In patients who are unable to do physical exercise, an alternative to consider is pharmacological stress with dobutamine or dipyridamole (either echocardiography or MPS). Figure 2 presents an overview of this algorithm proposed for diagnosing silent ischemia in diabetics.

Interestingly, in 79% of patients in the DIAD study with ischemia on initial MPS, ischemia resolved in the third year.[26] This pattern was associated with intensified treatment using aspirin, statins and angiotensin-converting enzyme inhibitors. However, the authors point out that since the study was not designed as a treatment trial, this association cannot be considered evidence of a causal relation.

Noninvasive imaging techniques have been shown to be extremely useful in diagnostic and prognostic assessment of coronary disease in individuals with DM, but such techniques must always be judiciously applied and in combination with clinical examination, evaluating atherosclerotic risk factors and applying an appropriate diagnostic algorithm.