INTRODUCTION: With 333 million cases worldwide predicted for 2015, type 2 diabetes mellitus presents an important global health challenge. Its rising tide calls for health policies emphasizing prevention at the primary care level, including public education as well as early risk identification and intervention.
OBJECTIVES: Estimate risk of developing type 2 diabetes in persons with no known glucose abnormalities, registered in a primary care setting in Pinar del Río city, Cuba, using FINDRISK.
METHODS: A descriptive, cross-sectional study applied FINDRISK to 620 persons aged >18 years randomly selected from a universe of 1058 patients with no known glucose abnormalities, registered in family-doctor-and-nurse office No. 23 in the Turcios Lima Teaching Polyclinic health area, Pinar del Río city.
RESULTS: The study population was predominantly aged <45 years (53.5%) and 80.2% was overweight or obese. At least moderate risk of diabetes was found in 74.4% of the sample, and 10.5% was at very high risk, meaning an estimated 120 patients in the sample could be expected to develop type 2 diabetes within the next 10 years.
CONCLUSIONS: Type 2 diabetes prevalence can be expected to increase substantially in this population over the next decade. We recommend design and timely implementation of intensive lifestyle change programs to eliminate or slow development of type 2 diabetes in at-risk individuals. We propose following cohorts identified by FINDRISK to assess its prognostic value in the Cuban population.

Diabetes mellitus (DM) has become one of the most important global health problems, with accelerated growth in numbers of people affected. Each year, there are seven million new cases and every ten seconds a patient dies from DM. An increase to 333 million cases by 2025 is anticipated, which would involve 6.5% of the world's population.[1]

In Cuba, DM is also a major public health problem, affecting quality of life for diabetics and their families, as well as increasing the burden of direct and indirect health costs to them, the public health system and the national economy. In 2010 there were 22,000 DM hospitalizations. In 2011 DM prevalence was 47.7 per 1000 population, and DM was the eighth cause of death, with a mortality rate of 11.5 per 100,000 population; it was also implicated in the first and third causes of death.[2,3]

Preventing type 1 DM remains a goal for the future, but the possibility of preventing type 2 DM has been demonstrated. It requires action based on sustained lifestyle changes involving diet and physical activity, as well as identification of population groups at greater risk, in order to implement health policies that create environments conducive to achieving these changes.[4-10]

Several tools have been described for predicting DM in individuals with no known glucose metabolism disorder, most based on clinical and anthropometric variables and biochemical measurements.[1124] However, we have not found any application of these tools or predictive studies in the Cuban medical literature.

The Finnish Diabetes Risk Score (FINDRISK)[25] was the first lifestyle and clinical parameter predictive scale to identify individuals at risk for type 2 DM. It covers eight aspects: age, body mass index (BMI), abdominal circumference, physical activity, diet, antihypertensive drug use, personal history of high blood glucose and family history of DM. It was developed in 1987 by Lindström and Tuomilehto for a population sample in Finland comprised of persons who answered a questionnaire and were followed for ten years. The scale was found useful for predicting type 2 DM and it has been the one most widely disseminated and used for this purpose internationally.[25]

In the population served by family doctor-and-nurse office (CMF, the Spanish acronym) No. 23 of the Turcios Lima Teaching Polyclinic health area in Pinar del Río city, the assumption was made of the existence of a group of individuals unknowingly at high risk for developing type 2 DM; identifying them was necessary to map strategies to prevent or slow disease onset. Hence, our decision to conduct this study to answer the question: can we detect such individuals, who have no known glucose abnormalities, using FINDRISK,[25] a scale designed for a different population?

A descriptive, cross-sectional study was done of the population served by CMF No. 23 of the Turcios Lima Teaching Polyclinic health area in Pinar del Río city in 2010, to estimate risk of type 2 DM in individuals with no known glucose abnormalities.

Population The study universe consisted of 1058 individuals aged >18 years who received primary health care at CMF No. 23 and had no personal history of any type of DM or other known carbohydrate metabolism disorder. The final sample consisted of 620 individuals randomly selected using a random numbers table, following sample size determination based on estimates of risk distribution on the FINDRISK scale from a pilot sample of 24 individuals.[25] We estimated that a sample size of 620 would be needed to obtain a confidence interval for the population mean at a significance level of α = 0.01 (at 99%).

Data collection Patient data were gathered using a survey modeled on the original FINDRISK[25] score; when necessary, medical records were consulted and updated during followup. Data from both sources were entered into an information collection form designed for the study, which contained the variables described in Table 1. 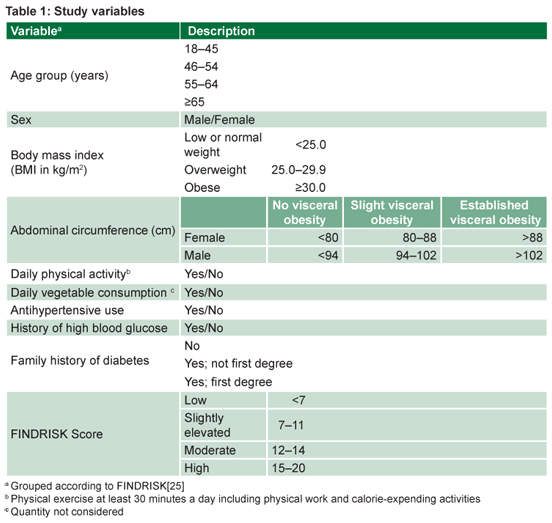 Ethical aspects The project was approved by the medical ethics committee of Turcios Lima Teaching Polyclinic. Individuals' identities were protected and they provided written informed consent prior to inclusion in the study. 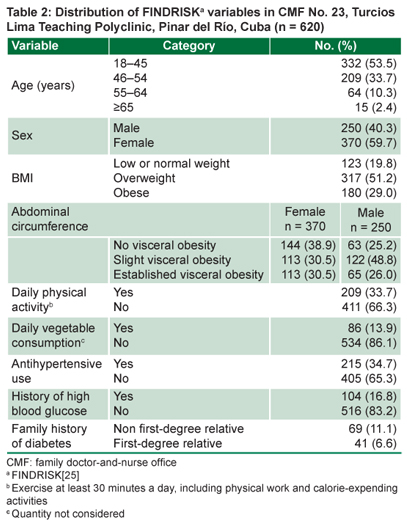 Table 3 shows the distribution of FINDRISK risk levels in the sample, probabilities for each risk level of developing type 2 DM in the next ten years, and the number of resulting new cases of type 2 DM.

Over the next decade, if no risk reduction action is taken, 120 new DM cases can be expected in the sample and 202 in the total CMF No. 23 population, assuming the same underlying risk distribution in both.

The fight against DM, with its high prevalence and both short- and long-term complications, can be won through prevention and early diagnosis.[2628]

Persons with elevated DM risk should be targeted for education.[2,6] Education of diabetics is essential to optimize metabolic control and prevent appearance and progression of complications.

Like other population screening studies,[29] in this one we chose FINDRISK because of the ease of obtaining the required clinical, anthropometric and hematologic parameters. However, it would have been ideal to develop a risk scoring adapted to the Cuban population, since methods developed in one country cannot always be applied successfully in another.[25,30]

In multivariate analysis including all parameters of the original FINDRISK[25] cohort (n = 4746), an age >45 years increased DM risk.[25] In our study, the majority of patients were aged <45 years, and therefore had less age-associated risk.

Another statistically significant predictor of DM in the FINDRISK[25] validation was male sex (OR 1.58, 95% CI 1.152.18). Inclusion or exclusion of sex in predictive models can influence the predictive coefficient of other variables, so some authors have preferred to develop sex-specific risk scores.[24,31]

Most persons in our sample were classified as overweight by BMI. In Lindström and Tuomilehto's multivariate analysis for FINDRISK, overweight was not a statistically significant predictor, [25] but they included it in the final version of the score because it was obvious to them that overweight was an intermediate stage between normal weight and obesity, the latter associated with greater DM risk. Overweight individuals should also be included in lifestyle change efforts, since DM onset is almost unavoidable once they become obese.[25]

The FINDRISKvalidation report indicates that increased abdominal circumference in both sexes significantly increases DM risk. [25] This is not surprising, since it correlates well with intra-abdominal and retroperitoneal fat. Intra-abdominal fat is metabolically very active and therefore its basal state is one of constant lipolysis, releasing free fatty acids into portal circulation. These free fatty acids travel to the liver and induce insulin resistance, leading to increased hepatic glucose production.[35]

The FINDRISK model also includes physical activity and fruit and vegetable consumption, although they contributed little to its predictive power.[25] They included the two variables to emphasize the importance of physical activity and diet in DM prevention. The fact that the bulk of patients in our sample did not exercise regularly or eat vegetables daily underscores the importance of addressing these factors in prevention programs.

DM prognostic scales have been used not only to estimate DM risk, but also in diagnosis of established glucose abnormalities.[36] In the Finnish study,[25] half the individuals who reported hyperglycemia history were corroborated as diabetic. Thus, the 104 patients in our study who reported previously elevated blood glucose levels should be given new fasting glucose and oral glucose tolerance tests, to confirm or rule out DM or pre-DM.

The distribution of risk observed in our sample suggests a substantial increase in type 2 DM prevalence over the next ten years if we do not take effective preventive measures. In the Finnish cohort where the score was first used, overall 10-year increase in DM prevalence was 4.1%.[25]

Prevention is the most reasonable and effective way to avoid the dramatic consequences of DM, and our results confirm the importance of our main recommendation: design and implementation of intensive lifestyle change programs to mitigate the course of the current DM epidemic.

The use of risk scales such as FINDRISK enables us to define the population most at risk of DM, and, as result, to intervene in a timely fashion to eliminate or slow its onset. Efforts to that end include building awareness among primary care physicians, as well as developing public policies for prevention and public education starting at an early age.

The cross-sectional design of the study constitutes a limitation; hence our second recommendation, ten-year followup of the cohort to validate our risk predictions.

DM prevalence in our CMF population is expected to increase over the coming decade. Hence the need for timely, intensive lifestyle change programs to eliminate or slow the appearance of type 2 DM in at-risk individuals. We propose following cohorts identified in this study by FINDRISK scoring to determine its predictive value for the Cuban population.

6. The Diabetes Prevention Program Research Group. The 10-year cost-effectiveness of lifestyle intervention or metformin for diabetes prevention: an intent-to-treat analysis of the DPP/DPPOS. Diabetes Care. 2012 Apr;35(4):72330.