INTRODUCTION: Nosocomial pneumonia associated with use of mechanical ventilators is one of the greatest challenges confronted by intensivists worldwide. The literature associates several bacteria with this type of infection; most common in intensive care units are Acinetobacter baumannii, Pseudomonas aeruginosa, methicillin-resistant Staphylococcus aureus and some of the Enterobacteriaceae family.
OBJECTIVES: To identify the causal agents of nosocomial ventilatorassociated pneumonia in patients receiving mechanical ventilation in the intensive care units of Havana's Hermanos Ameijeiras Clinical-Surgical Teaching Hospital in 2011, and to characterize their antibiotic resistance.
METHODS: A cross-sectional descriptive study was conducted using hospital administrative data of quantitative cultures from positive tracheal aspirates for January through December, 2011. Records were analyzed from 77 intensive care unit patients who developed nosocomial ventilator-associated pneumonia. Variables examined were age and sex, and pathogens identified from culture of tracheal aspirate and related antibiotic susceptibility.
RESULTS: Species most frequently isolated were: Acinetobacter baumannii in 53 patients (68.8%), Pseudomonas aeruginosa in 34 patients (44.2%), other species of Pseudomonas in 15 patients (19.5%), and Serratia marcescens, Klebsiella pneumoniae, and Escherichia coli in 12 patients each (15.6%). Some patients presented more than one pathogen in concurrent or successive infections. Antimicrobial susceptibility testing found high percentages of resistance to antibiotics in all these pathogens. Least resistance was found to colistin.
CONCLUSIONS: The prevalence of antibiotic resistance in bacteria causing nosocomial ventilator-associated pneumonia is of concern. Colistin is the drug of choice among the antibiotics reviewed, but sensitivity to other antibiotics should be assessed to search for more appropriate broad-spectrum antibiotics for treating nosocomial ventilator-associated pneumonia. Our results also suggest the need to strengthen infection control efforts, particularly in intensive care units, and to reassess compliance with quality control procedures. Multidisciplinary research involving microbiologists, epidemiologists, internists and intensivists is needed to fully understand the etiological and resistance patterns observed.

Nosocomial infections include infections that happen in hospital and were not present at time of admission, and infections acquired in hospital that become apparent within seven days following hospital discharge.[1] Ventilator-associated pneumonia (VAP) is the second most frequent hospital-acquired infection and one of the most aggressive; it is often associated with higher rates of morbidity and mortality, as well as with increased hospital stays and costs.[2] VAP constitutes 80% of nosocomial pneumonia, occurring in approximately 10% to 20% of patients requiring mechanical ventilation for more than 48 hours,[3] with case fatality between 24% and 76%.[4] While hospitals are not the only settings for mechanical ventilation, in this paper the adjective nosocomial is implicit wherever VAP is mentioned.

Most VAP occurs in intensive care units (ICU), where it affects up to 50% of patients;[5] VAP risk in ICU is two to five times higher than in other hospital services.[6,7] The main risk factor is invasive mechanical ventilation,[5] with incidence varying between 10 and 20 episodes per 1000 days of mechanical ventilation (DMV), with risk accumulated at a rate of 1% to 3% per day.[5]

VAP causal pathogens vary globally, geographically, by hospital and even by service.[5] Nosocomial pneumonia is usually bacterial, but viral or fungal VAP occasionally occurs. The most frequent VAP-associated pathogens, particularly after long hospital stays, are species from the Enterobacteriaceae family, Pseudomonas aeruginosa, methicillin-resistant Staphylococcus aureus (MRSA) and Acinetobacter baumannii.[12] These species have also been found in recent HHA ICU studies of VAP microbial etiology, predominantly nonfermenting bacilli such as Pseudomonas aeruginosa y Acinetobacter baumannii, which have shown intrinsic resistance to many antibiotics.[13]

In recent years there has been an increase in the spectrum of antibiotic resistance in causal agents of VAP in ICUs, along with higher incidence rates.[14,15] The increasing resistance to antibiotics shown by hospital-associated bacteria (particularly the gramnegative, nonfermenting bacilli) reduces treatment options and is frequently associated with clinical deterioration and even death.[16]

In the United States, 50% to 60% of the more than 2 million hospital-associated infections annually are caused by multidrug-resistant bacteria, resulting in some 77,000 deaths per year.[17]

Considering the prevalence and consequences of nosocomial VAP and its increasing resistance to commonly used antibiotics, as well as gaps in our knowledge concerning the particular causal agents present in our institution, we analyzed HHA ICU patient records for 2011 to extract data regarding isolation, identification and antibiotic resistance of bacteria removed by tracheal aspiration from ICU patients with nosocomial VAP.

This is a cross-sectional, retrospective descriptive study using data from laboratory records.

Setting and population HHA, a tertiary care hospital in Havana, Cuba, has 625 beds, 15 medical services, 12 surgical units, and 3 ICUs. In 2011, 174 patients in HHA ICUs received mechanical ventilation; of these, 77 developed VAP with no other possible source than HHA. Quantitative cultures of positive tracheal aspirates from these patients were analyzed in the HHA microbiology laboratory.

Variables Age and sex of the patients, isolated microorganism species, and antibiotic susceptibility.

VAP diagnosis This had been determined by the HHA department of epidemiology using American Thoracic Society criteria.[18]

Culture and sensitivity Quantitative cultures of the samples were done in the HHA microbiology laboratory, using the Vitek2Compact automatic reader (Biomérieux, France).[19] The HHA protocol for culture of tracheal aspirates[20] is as follows: Samples are homogenized with Sputasol (OXOID, UK) after centrifugation 10 min at 1500 rpm in a Kokusan H-103N centrifuge (Japan). This is followed by 1/10 serial dilutions (0.1 in 1 mL) in physiological saline (NaCl 0.9%) up to 10-6 and 0.1 mL of each dilution is plated in blood agar (Biolife, Italy), McConkey's agar (Biolife, Italy) and chocolate agar. The plates are then incubated in aerobiosis at 37 ºC for 18 to 24 hours. They are considered positive when there are >104 colonyforming units per mL (CFU/mL).

Data collection and analysis All laboratory data were extracted from clinical records stored in the hospital management system. Simple counts and percentages were analyzed.

Ethical considerations The study was approved by the HHA ethics committee. Personal identifiers were kept confidential in data analysis. 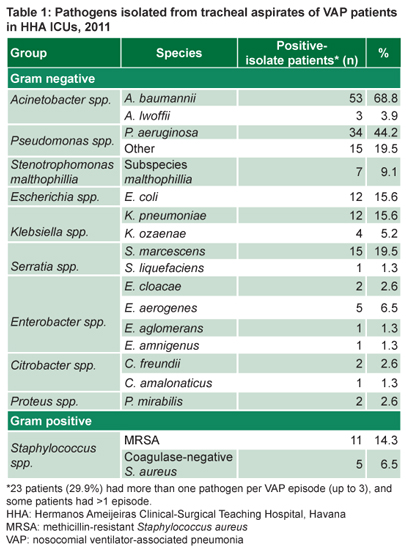 Most infections acquired by patients mechanically ventilated at the HHA ICUs in 2011 were caused by nonfermenting bacilli, particularly Acinetobacter baumannii. This contrasts with other authors who report Enterobacteriaceae, Pseudomonas aeruginosa, and methicillin-resistant Staphylococcus aureus as the main agents isolated. [8,16] Nevertheless, A. baumannii VAP has also been reported frequently in hospital ICUs in California, USA,[23] Taiwan[24] and French Polynesia.[25]

A. baumannii is a gram-negative bacterium encountered mainly in hospital environments. It persists for long periods of time in both dry and humid settings, and can also resist desiccation, which could increase transmission of epidemic strains usually found in ICUs.[26] Transmission of A. baumannii is associated frequently with mechanical ventilation equipment, aspirators, humidifiers, and other devices previously in contact with patients colonized by these bacteria.[27] When appropriate control measures are not taken, the hands of ICU personnel can be an important vector for patient-topatient transmission.[28] Thus, inadequate equipment sterilization, insufficient handwashing or a general breakdown of hospital infection control protocols can lead to high rates of ICU infection by A. baumannii. Our results suggest the need for thorough investigation of quality control systems in HHA to assess compliance with infection control norms and to identify why A. baumannii is the predominant bacterium found in these ICU patients.

P. aeruginosa was the second most frequently isolated agent in the hospital's ICU VAP patients. Globally, it is perhaps the most common species affecting mechanically-ventilated ICU patients.[2932] It has a special tropism for the tracheal epithelium[33] and is able to colonize the lower respiratory tract of intubated patients through both endogenous and exogenous routes.[34]

Microorganisms of the Enterobacteriaceae family, chiefly E. coli and K. pneumoniae, are also reported frequently in association with VAP. [35,36] A study in a hospital in eastern Cuba found percentages of enterobacterial infection in VAP patients similar to those in this study. [37] However, in our research, the prevailing Enterobacteriaceae species in VAP patients was S. marcescens, in contrast with other studies reviewed.[23,3133,37,38] The literature reports S. marcescens infections in VAP patients as limited to ICU outbreaks associated with failure to properly sterilize medical equipment, contamination of ventilation equipment, and substandard asepsis.[38]

Another important issue emerging from our study, as well as in the international literature, is the presence of multidrug resistance habitually found with nosocomial bacteria. In critically ill patients, antibiotic resistance negatively affects clinical course and increases ICU costs.[39]

Antibiotic resistance in nosocomial bacteria may be the most important factor to consider in treating VAP. Another recent study by our group at HHA showed that A. baumannii species isolated from VAP patients were more resistant than those found in patients with ventilator-associated tracheobronchitis or in asymptomatic colonized patients. The same was observed for P. aeruginosa.[13] The high resistance to almost all antibiotics by the most frequent bacterial species isolated means that in our hospital we cannot treat VAP empirically without first conducting culture and sensitivity tests.

Low levels observed of bacterial resistance to colistin are consistent with other reports.[40] Colistin has been found to be more effective with simultaneous intravenous administration and nebulization. [41,42] Nevertheless, it should be noted that some microorganisms (such as S. marcescens, Proteus spp., Providencia spp., and Morganella morganii) exhibit intrinsic resistance to colistin;[41] all S. marcescens isolates in our study were resistant to colistin.

A. baumannii was not only the species most frequently isolated in our study but was also the most antibiotic resistant. Carbapenems (meropenem and/or imipenem) are considered the treatments of choice when sensitivity assays show low levels of resistance,[43] but all isolates reported here showed very high levels of resistance to these drugs, even higher than previously reported some years ago in hospitals in Madrid and Hong Kong.[43,44] Our findings are similar to Hart's 2010 report of a substantial increase in resistance to colistin, tigecycline, aminoglycosides and carbapenems in HHA[45] compared to eight years earlier.[46] A. baumannii's growing antibiotic resistance has become an important problem for our hospital. Thus, reinforcing infection quality control proceduresparticularly in ICUs is critical, as is further research to identify contamination sources.

An important limitation of this study was inability to assess resistance to more antibiotics, including tigecycline and rifampicin, considered effective for A. baumannii. Nor were we able to assess use of multidrug therapy for VAP.

The main importance of our results is that they reveal the principal species causing nosocomial VAP in HHA ICUs; the most recent previous study in 2002[46] was able to identify microbial genera but not species. Identifying pathogen antibiotic resistance in our facilities will support drug resistance monitoring in future research, and thus may contribute to improved treatment planning.

Prevalence of antibiotic resistance in bacteria causing VAP is of great concern. Colistin is the drug of choice among the antibiotics reviewed, but sensitivity to other drugs should be assessed to search for more appropriate broad-spectrum antibiotics to treat VAP patients. Our results suggest the need for strengthened infection control efforts in the ICUs, and for reassessing compliance with quality control procedures. Multidisciplinary research involving microbiologists, epidemiologists, internists and intensivists is needed to fully understand the etiological agents and resistance patterns observed.

The authors thank the HHA department of hygiene and epidemiology for providing data.