LESSONS FROM THE FIELD

Globally, traumatic brain injury (TBI) is one of the main causes of death and permanent disability in young adults,[1] and is responsible for almost half the deaths from multiple trauma and 60% of accidental deaths.[2] In Cuba, unintentional injuries were the fifth cause of death in 2011.[3]

Since 1970, international efforts have been made to develop tools that are easy to use and interpret in order to predict vital status of TBI patients on hospital separation.[4] The Glasgow Coma Score (GCS), and APACHE I, II, and III, are mortality prediction models used to assess risk in TBI patients in intensive care units. These models are being reviewed and updated continually and include many clinical and laboratory parameters. Moreover, several complementary testssuch as hemoglobin, blood glucose, cranial computed tomography (CT) and magnetic resonance imaging, electrolyte panel and coagulation profile have been suggested to predict poor immediate and longer-term prognosis.[4,5]

The most recent evidence of such associations was contributed by analyses of the IMPACT (International Mission for Prognosis and Clinical Trial) and CRASH Trial (Corticosteroids Randomized after Significant Head Injury) databases, from European and US multicenter studies, respectively.[6,7] They confirmed the association of low GCS scores, absence of pupil reaction, hyperglycemia and certain trauma mechanisms with poor prognosis.[8] Such progress in formulating accurate prognostic methods, derived from analyzing associations between particular parameters and mortality, can inform treatment decisions by classifying patients by risk. Their utility has been demonstrated by lower death rates following their introduction in various contexts.[9]

However, the main prognostic methods were created using data from patients in high-income countries.[6,7] These are applied to estimate risk in patients from low- and middle-income countries (Cuba in the latter group), assuming the same results for all, without considering differences in their health care systems and possible variation in service quality or accessibility.[7]

Cuban researchers who have addressed this issue at the national level found the following factors predictive of higher mortality: blood hypotension, GCS <8 points on admission, extradural hematomas and other injuries detected on cranial CT and evoked potentials.[10,11] Given the slight differences between international findings and national findings in Cuba, we wanted to confirm predictors at the provincial level in our province of Sancti Spíritus.

Between 75 and 85 TBI patients are admitted annually to the Sancti Spíritus Provincial General Teaching Hospital, with an average of 8 deaths, a case fatality close to 10% (hospital administration data). On admission, among the data recorded, only GCS and detectable injuries in cranial CT are used as prognostic elements. Since international reports suggest that identifying new prognostic indicators of mortality can enable targeted therapy and hence reduce mortality,[9] the objective of this study was to consider a broader range of admission results (clinical, laboratory and imaging) and severity scales and determine their value for predicting mortality in traumatic brain injury patients in the provincial hospital in Sancti Spíritus Province.

A case-control study was carried out using data for TBI patients admitted to the provincial hospital from January 2009 through December 2010 (154 patients). To identify the association of clinical, laboratory and imaging results and severity scales with mortality, patients admitted with TBI diagnosis were considered suitable for inclusion in the study. Four forensic medicine patients (whose injuries were related to ungoing civil civil or criminal proceedings) were excluded, as were 51 with incomplete data (27 were missing blood glucose results, 35 CT, and 11 both).

Data for all 16 deceased patients were used and 2 controls selected for each from among patients discharged alive, using random number tables. One control was excluded due to loss of data after the sample was defined, leaving a final sample of 47.

TBI prognosis was defined as poor if death occurred during hospitalization at the provincial hospital or good if he or she survived to discharge.

All values reported refer to first determination on day of admission.

Data were analyzed using the Statcalc program. The chi-square test was used to determine association between variables at admission and vital status on hospital separation and, when any cell had an expected value of <5, the Fisher exact test was used. A p value of 0.05 was used as the significance threshold for both tests. To assess association strength, odds ratios were calculated with 95% confidence intervals (CI).

All data were obtained from clinical records and patient names were not used for information collection. The study was approved by the provincial hospital ethics committee.

Cases were older than controls; mean age in those who succumbed was 58.8 years, versus 48.7 years in those who survived. There was no clear trend in mortality by age. Male sex predominated in both cases and controls.

No significant differences in mortality were found between the sexes. Average age of deceased women was higher than that of female survivors (73.3 years vs. 52.3 years, respectively), and both groups were older than their male counterparts (Table 1). 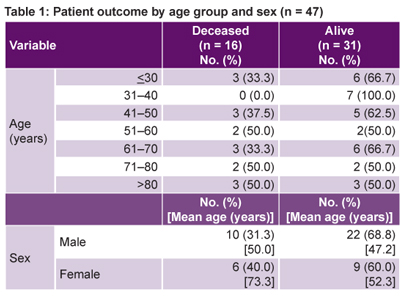 We did not observe a steep increase in mortality as patient age increased, as has been seen in other studies; two inflection points have been described: one around age 30 and after age 55 years,[19,20] but these findings are not universal.[20] Our sample size was too small to be informative on this point.

The sex difference in mortality was least in the oldest groups, when any putative residual effect of female hormones would have disappeared. Thus, age may have acted as a confounder, making it difficultbased on these datato weigh in on discussion about whether differential treatment for men and women is indicated, as suggested by some authors.[21,22]

Our findings that low GCS and GCSM conferred poor prognosis have been reported previously,[23] and coincide with Cuban national results.[10,11] Current debate centers on comparing reliability of these parameters for inclusion in prediction models, as in CRASH and IMPACT; these included GCS but not GCSM, because of the former's greater association with mortality.[11,12] We agree with those who suggest that inability to collect information on GCSM's vocal component in patients who are sedated or connected to ventilation equipment may affect its usefulness.[12,24] Also, if the effect size is small, the problem of small sample size in our study (and others) resulting in a larger margin of error is compounded.[25]

There is consensus that absence of pupil reaction to light predicts poor outcome and it has been included in several prognostic models.[7,8] Recently, it was reported that its predictive power increases when associated with other variables that also predict risk of death in TBI patients.[26] In our sample, it showed a lesser association with poor prognosis than did GCS, but CIs for both were very wide and overlapped.

Although respiratory distress on admission showed strong association with death in our sample, the CI was wide and the true effect on risk could be less than twofold. Thus, it has not been considered a candidate for prognostic models.[7,8] In our sample, >30% of those discharged alive had respiratory distress on admission. Although it may not be a strong prognostic factor, it does indicate secondary damage and thus is important to consider in clinical management of these patients.[14]

Both extremes of blood pressure: hypertension and hypotension, have been associated with poor prognosis, although the IMPACT study describes such a negligible relation that it disappears after adjustment for the effects of other factors.[15] Our results show no evidence relating either of these to risk of death, in contrast to national findings on this variable.[10,11]

Low hemoglobin values are hypothesized to confer poor prognosis because of reduced brain perfusion,[27] but recently the IMPACT study[8] also found that excessively high hemoglobin levels actually worsened prognosis. In our study we did not find evidence supporting either conclusion. Our findings are consistent with the evidence suggesting that TBI patients can tolerate low hemoglobin values without great tissue damage.[28]

We defined hyperglycemia as blood glucose >8.8 mmol/L for comparability with other studies; however, for clinical purposes blood glucose of >7.4 mmol/L is considered hyperglycemia, and all our deceased patients were among the 21 who, by the latter definition, were hyperglycemic on admission; in contrast, no patients died who were normoglycemic by that definition. We concur with authors who recommend strict control of hyperglycemia and find it relates to poor prognosis.[17] Future studies should be carried out in Cuba, with a larger number of patients to study persistent hyperglycemia, which has been described as having a stronger association with outcome than hyperglycemia on admision.[17,29]

Clinical-demographic parameters have been reported to be more strongly associated with mortality than are CT findings and thus have been used in predicting patient vital status on hospital separation.[30,31] Our point estimates suggest support for these findings, but should be interpreted with caution because of the wide CIs resulting from small sample size. In our study, all deceased patients had lesions detectable on cranial CT, an unusual finding, even compared with studies done using more sensitive imaging techniques, such as magnetic resonance imaging;[31,32] this may reflect a difference in distribution of severity between these series and ours.

The higher mortality among patients with subarachnoid hemorrhage in our sample has been described in another series of cases, where intracranial hemorrhages (subdural hematoma and contusions) were associated with worse prognosis, with a stronger association for subdural hematoma than for other types of lesion.[31]

The high frequency of patients with CT-detectable lesions in our study could be due to sample design, since many patients without CT scans were excluded. Missing datamainly laboratory tests also led to exclusion of many patients.

This resulted in a small sample size, the study's greatest limitation, which also may have created a selection bias in favor of patients with more severe injuries, since mild TBI patients had shorter hospital stays and were less likely to have all the laboratory tests required for the study. Such a bias has been reported by a US panel that reviewed clinical practice guidelines for management of patients with mild traumatic brain injury.[33] It should be noted that some studies reviewed were specifically of patients with mild TBI.[18,30,31]

This small sample size creates broad CIs that overlap for all statistically significant variables. Nevertheless, we found several associations that have been observed in much larger studies; having found these associations with a reduced sample size should be considered supporting evidence.

The prognostic value for mortality of low GCS and GCSM scores, absence of pupil reaction to light, respiratory distress, blood glucose >8.8 mmol/L, and detectable lesions on CT scan was confirmed by this study of patients with TBI in Sancti Spíritus Province. The prognostic value of low hemoglobin and extremes of systolic blood pressure could not be confirmed.