Care for pregnant diabetics in Cuba: achievements and challenges

Establishment, progressive development, expansion and organization of Cuba's National Comprehensive Diabetes and Pregnancy Program is described, including changes in related health services since 1959. Currently implemented throughout the country, the Program is supervised by a working group and addresses diabetic women's reproductive health and care during pregnancy. The importance of preconception care for diabetic women is emphasized, as well as the need to increase Program uptake nationally, including screening for gestational diabetes in primary care.

Special attention to pregnant women with diabetes began after the sociopolitical changes of 1959 that involved transformation of health services leading to a single national health system based on three principles: health as a right, state responsibility for the population's health, and equal access to health services for all. [1] Such specialized care has grown more organized over the years, in keeping with advances in endocrinology and in Cuba's MaternalChild Health Program (PAMI, the Spanish acronym).[2,3]

This in turn led to development of the National Comprehensive Diabetes and Pregnancy Program (hereinafter, the Program) comprising clinical, educational and research activities throughout Cuba at all care levels, concerning two population groups:[4]

That is, diabetes in pregnancy is defined as both pregestational diabetes and diabetes that appears for the first time during pregnancy.[4]

Women with DM constitute a high-risk reproductive group requiring special care before, during and after pregnancy. Such efforts aim to reduce the high rates of associated maternal and perinatal morbidity and mortality, particularly if pregnancies are unplanned and therefore may be inadequately managed.[5]

Preconception care for diabetic women has two fundamental objectives: to prevent congenital anomalies by ensuring optimal preconception glycemic control, and to detect DM complications (some of which are contraindications to pregnancy, such as severe diabetic nephropathy), managing treatable ones to reduce risk prior to conception.[4,6] During pregnancy, chronic DM complications predating conception should be monitored every trimester.[4,7]

In Cuba, all pregnant women with one or more GD risk factors should be identified at the primary care level. Risk factors include age >30 years, first-degree family history of DM, history of GD, history of neonatal macrosomia (neonate weight >4000 g), history of unexplained fetal death after 34 weeks, overweight or obesity, and at-risk fasting blood sugar during pregnancy (>4.4 mmol/L). The Program indicates a fasting blood sugar test for such women at 24 weeks' gestation and an oral glucose tolerance test between the 28th and 32nd weeks.[4]

GD detection in Cuba uses a 2-hour oral glucose tolerance test with 75 g of glucose, based on WHO criteria: 2-hour blood sugar of >7.8 mmol/L. After the Cuban Pre-Diabetes Consensus Meeting of 2009, an alternative criterion was added: two fasting blood sugar tests of >5.6 mmol/L.[4,8]

Proper care for preconception diabetic women and for pregnant women with diabetes contributes to increased positive outcomes for these women and their babies. To ensure quality treatment for these women in Cuba, diabetes and pregnancy services have been established in all provinces: five in Havana Province [until 2012, Havana City ProvinceEds.] (one in each hospital with obstetrical services) and one in the main maternity hospital in each of the remaining 14 provinces (diabetes in pregnancy in the Isle of Youth Special Municipality is managed by obstetricians specializing in high-risk pregnancies). Together these services comprise the Cuban Network of Diabetes and Pregnancy Services.[9,10]

More will be required of these services with increasing DM prevalence.[11] Cuba's only census of reproductive-age diabetic women (1549 years) was conducted in 2000 and yielded a total of 43,840. The greatest numbers were found (in descending order) in the provinces of Havana City, Havana, Camagüey and Santiago de Cuba.[4,9] Overall prevalence of diabetes in women that year was 30.2 per 1000 population;[12] by 2011, prevalence had almost doubled: 55.8 per 1000 population.[13] Although there have been no further estimates of diabetes prevalence in reproductive-age women since 2000, it must be higher, given the increase in overall DM prevalence, steadily increasing prevalence of overweight and obesity since the 1990s,[14] and a trend to postponing childbearing.[15]

Diabetes and pregnancy activities in Cuba have not always been as organized or accessible nationwide: in the early 1960s, health care for pregnant diabetics was centralized and available only at a few large hospitals, such as Havana's General Calixto García University Hospital and a few maternalchild hospitals in the capital and elsewhere. In 1965, Dr Antonio Márquez Guillén recommended creating special services in each Cuban maternity hospital to treat diseases associated with pregnancy; these centers, staffed by obstetricians and internists, would provide care for pregnant women with diabetes, as well as other diseases.[9,16] The first specialized pregnancy and diabetes clinic opened its doors in 1966 and the first manual on diabetes and pregnancy care was published in 1968. In the early 1970s, the Ramón González Coro Women's Hospital by then the main center for treating pregnant women with diabetesopened its Diabetes and Pregnancy Service. In 1973 a prognostic classification of diabetes and pregnancy was established by Cuban specialists.[9,17]

Cuba's National Institute of Endocrinology and Metabolic Diseases (now the National Endocrinology Institute; INEN, the Spanish acronym) in Havana has had a Diabetes Reproductive Risk Consulting Service in its Diabetes Care Center (CAD, the Spanish acronym) since 1987; at the time, it attended women with pregestational diabetes who were then referred to the Service at the Ramón González Coro Women's Hospital (now the national reference center for diabetes in pregnancy) [18] once they became pregnant and had stable glycemic control. As of 1990, INEN's risk consulting service broadened its scope and now attends diabetic women who receive their maternity care from any maternity hospital in the capital and the western provinces of Pinar del Río, Matanzas, Mayabeque and Artemisa (the latter two formerly part of Havana Province). A similar consulting service exists in most CADs (16 of which are distributed across Cuba) and in each of the main maternity hospitals in the other provinces.[9,19]

In 2001, the Program was born in its current form when guidelines were issued;[4] some modifications have been made since, primarily to diagnostic criteria.[7] The Program is included in PAMI[3] and affiliated with the National Diabetes Program.[6]

Aiming for more diabetic women to receive specialized preconception care, INEN's CAD and the Ramón González Coro Women's Hospital Diabetes and Pregnancy Service have trained obstetricians and endocrinologists from health catchment areas in the capital and other provinces who specialize in care of diabetic women preconception and in pregnancy. PAMI's group affiliated with the national Program has also sponsored seminars for family doctors and obstetricians in health catchment areas in the capital and the rest of the country, and for members of multidisciplinary diabetes and pregnancy groups in provincial and Havana maternity hospitals during Program-monitoring site visits.

In light of significant progress in the diabetes and pregnancy field, in 2007 the World Diabetes Foundation (WDF) decided to collaborate with Cuba in completing the National Diabetes and Pregnancy Services Network mentioned above. Through this collaboration, diabetes and pregnancy services were set up in every maternalchild hospital in Havana and in the main maternalchild hospital in each province, The cooperation facilitated training on diabetes and pregnancy for 44 physicians, 45 nurses and 40 medical technicians; permitted publication of thousands of pamphlets and posters for a national health promotion drive focused on preventing complications of diabetes in pregnancy, a campaign that also included programs and articles in the mass media. The collaboration has also helped derive more detailed information on performance of the Program.[9,1820]

Over the course of the WDF projectfrom 2008 through the first half of 2012Cuban diabetic women gave birth to 13,285 infants; the provincial distribution is displayed in Table 1.[20] These accounted for 2.3% of the 572,500 births during the period.[8] Of these, 13.1% (1745/13,285) were born to women with pregestational diabetes and 86.9% (11,540/13,285) to women with GD.[20] Approximately 2% of all women who gave birth during the 4½ year period were diagnosed with GD, a relatively low rate in comparison with estimates in Europe (26%), the United States (37%) and Sub-Saharan Africa (29%).[2123] One of the few Cuban gestational diabetes prevalence studies, published in 1996, found a 4.5% prevalence in 462 pregnant women in a Havana municipality during a single year.[24] The 2% prevalence observed nationally is likely an underestimate, as it is incongruent with the increase in risk factors such as overweight and obesity in Cuban women of childbearing age, and maternal age >30 years associated with the tendency to postpone childbearing.[14,15,25] We infer that casefinding of gestational diabetes is still insufficient in Cuba. 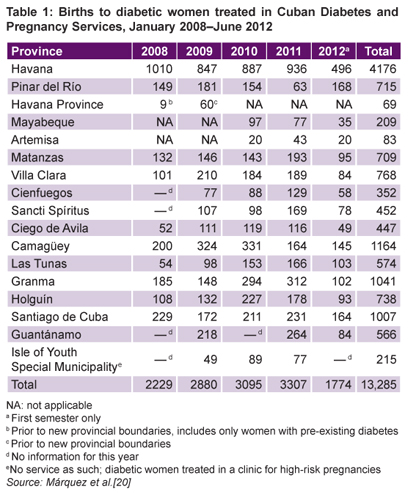 And we need to make it work for more women In 1992, less than 20% of pregnant pregestational diabetic women treated in INEN's Diabetes and Pregnancy Service had received preconception care.[26] In the three five-year periods ending in 2010, the corresponding proportions were 22.6%, 20.2% and 28.4%, respectively;[27] in 2011 and the first semester of 2012, they were 34.7% and 41%, respectively.[20] These later data suggest a slight improvement over time in extent of preconception care. Rates do not differ greatly from those observed internationally, which are below 50% in most studies.[2832]

We believe that much work remains to improve preconception care for diabetic women and screening for GD, both of which are priorities for the Program; they are consistent with the Ministry of Public Health's 2015 goals for Cuba (improved maternal health, and reduced congenital anomalies and perinatal deaths)[33] and with the fifth Millennium Development Goal: improved maternal health.[34] Achieving these goals relies on continuing education for nurses, obstetricians and family doctors; plus intensified health promotion activities among women themselvesespecially those with GD risk factors or diabetes. An updated census of reproductive-age diabetic women is in the planning stages in order to estimate GD prevalence and more precisely determine reasons for possible GD under-reporting as well as why fewer than half of diabetic women receive preconception care. The primary care system, particularly family doctors and nurses, will be key in the struggle to improve maternal and child health by reducing diabetic complications of pregnancy.

In Cuba, an intense national diabetes and pregnancy program aims to provide diabetic women with quality care prior to and during pregnancy. This work is ongoing and we continue to set new goals such as accurately identifying the reproductive-age population of diabetic women, increasing the percentage of diabetic women receiving preconception care, and increasing GD screening. These actions will improve health and quality of life for diabetic women and their children.