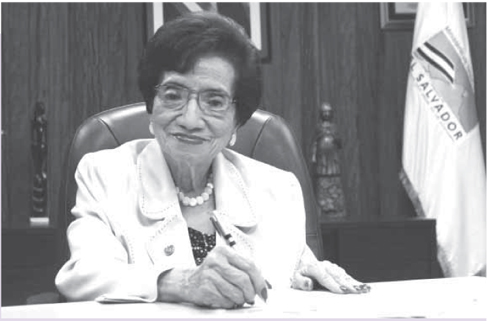 In April 2013, a consortium of regional health ministries, nongovernmental organizations, aid agencies, clinical specialists and researchers from diverse sectors convened in San Salvador to discuss the epidemic of chronic kidney disease of unknown or non-traditional causes (CKDu) plaguing agricultural communities in Central America and beyond. The three-day meeting, where presentation of research on the clinical and epidemiological characteristics of CKDu roused significant debate, led the Pan American Health Organization to declare CKDu "a pressing and serious health problem [which] represents a burden for families, communities, health systems and society as a whole."[1]

This High-level Meeting on Chronic Kidney Disease of Non-Traditional Causes in Central America (2426 April) followed several international meetings at which Dr María Isabel Rodríguez, El Salvador's Minister of Health, presented studies on the disease burden in her country, where end-stage renal disease is the leading cause of hospital deaths. She outlined results of original scientific research by Dr Carlos Orantes (first published in MEDICC Review), that described an "elevated prevalence of chronic kidney disease, chronic renal failure and risk factors" among the patients studied, noting that "the most common [form] was chronic kidney disease of unknown cause, associated with neither diabetes nor hypertension."[2]

In this interview with MEDICC Review, Dr Rodríguez discussed the gravity of the problem in Salvadoran agricultural communities; the importance of CKDu research in other countries; and the urgent need for intersectoral action and active community participation to confront and control the epidemic.

MEDICC Review: How would you characterize the epidemic of chronic kidney disease of non-traditional causes (or of unknown etiology, CKDu) affecting your country?

María Isabel Rodríguez: Here in El Salvador, agricultural workers are becoming sick and dying from CKDu. It's ravaging their communities. The scientific investigation undertaken by Dr Carlos Orantes, with technical support from PAHO, presented the necessary evidence to sound the alarm. The problem and population health picture are well-defined epidemiologically and clinically, distinguishing this new pathology from traditional CKD. Patients [5018 to dateEds.] in the study are not presenting with traditional factors associated with CKDnamely diabetes mellitus and hypertension.

We're seeing a totally different manifestation of CKD in these communities and have reached a critical tipping point: from the knowledge, evidence and facts presented by various subsequent studies, it is clear that an integrated, multisectoral response is needed.

MEDICC Review: How did the problem first come to your attention?

María Isabel Rodríguez: The first CKDu study was undertaken in response to pressure brought to bear by the people suffering from the epidemic. Even before I was appointed Minister, agricultural workers came to me and alerted me to the fact that people from their communities were becoming sick and dying from CKD, outlining the scope of the problem. Without this push from the communitiesfrom the grassrootsthis study would not have been undertaken with such urgency.

In El Salvador, rural communities have long maintained a tradition of active citizen participation and social organization. This dates back to the war [19801992Eds.] when these people were persecuted and relocated to refugee camps in Honduras and elsewhere. When they returned after the war, the tradition took on new energy and communities were motivated to press for services formerly unavailable to them, including primary health care, vaccines and medications.

MEDICC Review: How has such community participation affected the concept of public health and service delivery in El Salvador? 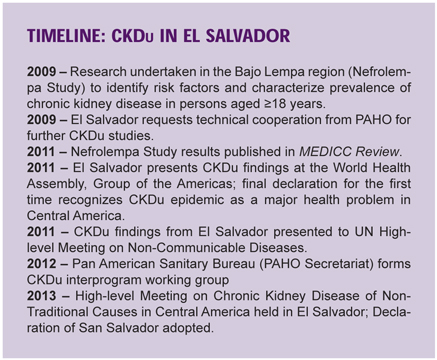 We couldn't have achieved the level of care and attention we have thus far if it weren't for active participation by the people living in these areas. They feel a part of the health services; they sense they have a stake in them. For example, our health promoters are chosen by their peers, their neighbors; and community organizations are an active part of this process and of the whole health system. I staunchly believe health is a right and at every neighborhood clinic I inaugurate, I underscore the importance of the communitythey have to stand up for what they've achieved and the services that are their right. There's no going back, I tell them.

MEDICC Review: Has this participation been notable in studies and clinical services related to CKDu?

María Isabel Rodríguez: Absolutely. The Nefrolempa Study in the Bajo Lempa region undertaken by Dr Carlos Orantes and his colleagues spurred innovation in the primary health care system, in its organization and service delivery. When the study got under way, epidemiological, physical and chemical analysesincluding creatinine levels and the restwere undertaken in a little thatched cabin with a dirt floor in the community. Despite these humble beginnings, I knew this was an important, necessary scientific studythat we had to determine what was making these people sick. Today, we offer integrated services to these patients in their communities and are constructing a center for comprehensive CKD study, care and treatment.

Yet, I remember the first meeting where the principal investigators, accompanied by PAHO consultants Drs Raúl Herrera and Miguel Almaguer, explained to patients what the study entailed. Although these same patients and their families had brought the problem to our attentionhad alerted us to the fact that people were dying from renal insufficiency in their communitiesI saw terrible fear in their eyes. They were so scared that at first they didn't want to be tested or find out what was afflicting them. Now you can see how people's attitudes are changing: whereas at the beginning some people abandoned the study, were too scared to be tested, today it's different, people's sensibilities are shifting now that they know services are available.

MEDICC Review: Which brings us to the High-level Meeting on Chronic Kidney Disease of Non-Traditional Causes. Why this meeting and why in 2013?

María Isabel Rodríguez: The purpose of this meeting first and foremost was to arrive at a definition of the disease[3]we know there's a problem, that end-stage renal disease is killing people at alarming rates in El Salvador and elsewhere, and that the causes are multifactoral. But since diabetes and hypertension aren't present, we need to understand what these factors are and how we can control them to lower risk and design appropriate prevention policies.

The other purpose of the meeting was to present scientific findings about CKDu from El Salvador and other countries where agricultural communities are showing high prevalence of the disease. The evidence suggests agrochemicals and pesticides as possible associated factors and this has to be investigated. The advanced studies on water quality and access, combined with urine and blood analysis of patients conducted in Sri Lanka[4], for example, are very important and must be considered. Furthermore, the longitudinal research on water and soil contamination undertaken by the University of Ohio, with fieldwork and analysis conducted in El Salvador, and the in-depth, ongoing research here has to be analyzed and complemented by other research. The Cuban contribution has also been important: their experience in the total-population study on the Isle of Youth[5] has provided exceptional insight, both regarding methodology and as an opportunity for comparison. 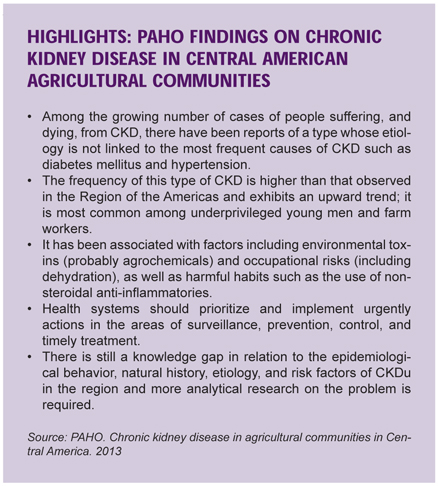 MEDICC Review: What are the next steps to confront the problem in El Salvador?

María Isabel Rodríguez: We've diagnosed the scope of the problem in the Bajo Lempa region of El Salvadoran important first step. Now we're launching a country-wide total-population study. This is possible since we reorganized the primary health care system to include a renal health program and launched a national renal research program. On the research end, we're continuing to analyze the clinical, laboratory and pathology results; and undertaking complementary, intersectoral studies with the Ministries of the Environment and Labor, for example, to determine how work conditions and environmental factors, like the presence of heavy metals, may be associated with CKDu.

Right now, I'm initiating a campaign targeting regulation of agricultural chemicals, pesticides and fertilizers. I invite researchers to continue their studies and present further evidence. But in the meantime, are we going to let these people be exposed to chemicals which could be contaminating their land and water? Are we going to forgo regulation while more evidence is amassed? In my opinion we need to enact control measures now. CKDu is an urgent health problemit demands an urgent response.

3. The statement released following the meeting, known as the Declaration of San Salvador, defines the health problem as tubulo-interstitial kidney disease.