INTRODUCTION: For at least a decade, a chronic kidney disease unassociated with diabetes mellitus, hypertension or any of the more common traditional causes, has been reported in Salvadoran agricultural communities.
OBJECTIVE: Characterize histopathology of chronic kidney disease of unknown etiology in patients from Salvadoran agricultural communities, describe renal damage associated with each disease stage, and assess associations between histopathological alterations and sociodemographic variables.
METHODS: The study involved 46 patients of both sexes, aged ≥18 years. After clinical, laboratory and imaging examinations, kidney biopsies were performed and renal tissue assessed for interstitial fibrosis, tubular atrophy, interstitial inflammatory infiltration, sclerosis, increase in glomerular size and extraglomerular vascular lesions (according to the Banff 97 classification used for kidney transplant rejection). Special staining was done: Schiff periodic acid, Masson trichrome and methenamine silver. Immunofluorescence techniques were used to evaluate IgA, IgG, IgM, complement C1q and C3, fibrin, and kappa and lambda light chain deposits.
RESULTS: The main findings were interstitial fibrosis and tubular atrophy with or without inflammatory monocyte infiltration. In addition, generalized sclerosis, increased glomerular size, collapse of some glomerular tufts, and lesions of extraglomerular blood vessels (such as intimal proliferation and thickening and vacuolization of the tunica media) were observed. Interstitial fibrosis and glomerulosclerosis were associated with male sex. Sugarcane workers showed more interstitial fibrosis and tubular atrophy and less glomerulomegaly than other occupational groups.
CONCLUSION: The morphological pattern in all biopsies was one of chronic tubulointerstitial nephropathy with secondary glomerular and vascular damage, in different stages of evolution of chronic kidney disease, independent of age, sex or occupation.

Chronic kidney disease (CKD) constitutes a global public health problem of epidemic proportions. Its main causes are diabetes mellitus, high blood pressure, glomerulopathies and polycystic kidney disease.[1] Much less common nephropathies with known causes specific to some geographic regions have been reported, such as endemic Balkan nephropathy and that caused by Chinese herbs.[2 - 5]

For over a decade, elevated prevalence and mortality have been reported from a chronic kidney disease of unknown etiology (CKDu) in several geographic zones, mainly in Asia (Sri Lanka and India) and Central America (Guatemala, El Salvador, Honduras and southern Mexico). It is found in rural communities and primarily affects farmworkers, especially men and those in low-income brackets.[6 - 11]

CKDu's high prevalence and incidence in El Salvador has spurred population-based epidemiological research in communities of the Bajo Lempa region to characterize the population affected and risk factors potentially associated with the disease.[9]

Given CKDu's high prevalence in El Salvador and the attendant costs of renal replacement therapy, its histopathological characteristics are of particular interest, especially since previous descriptions are scarce and include few patients. Our objective was to characterize the histopathology of CKDu in patients from Salvadoran agricultural communities, describe the evolution of renal damage associated with each disease stage, and assess associations between histopathological alterations and sociodemographic variables.

Renal biopsies were performed on all participants by percutaneous technique under ultrasonographic control using an automatic biopsy gun (Dana 2.2 Histo, 14-gauge, USA). Biopsy specimens were fixed in neutral buffered formalin; a Sakura tissue processor (Japan) was used. A Leica microtome (Germany) was used to take sections of 2 - 3 µm for paraffin samples and a Microm cryostat (Germany) for fresh tissue sections. 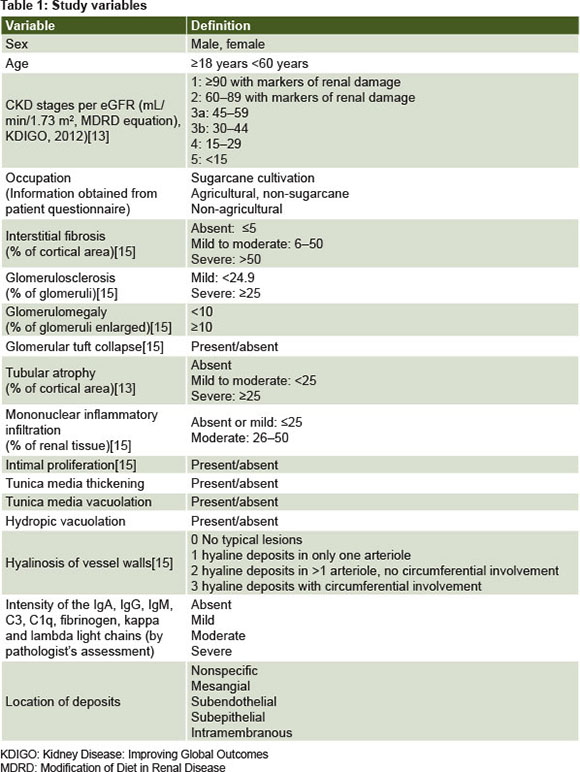 Analysis All information was stored in Excel and processed with SPSS version 15.0 for Windows. The Fisher exact test was used to identify possible differences by sex, with significance threshold set at α = 0.05.

Ethical aspects The study protocol was approved by El Salvador's National Committee for Clinical Research of the Higher Council of Public Health. Written informed consent was obtained from all participants.

Findings by age and sex During a two-month period, histopathological study was performed on 46 biopsies: 36 men (78.3%) and 10 women (21.7%). Mean patient age at time of biopsy was 45.4 years, with 30.6% aged <39 years. The youngest patient, aged 19 years, had severe tubular atrophy, interstitial fibrosis and glomerulosclerosis; his CKD had been diagnosed three years prior to biopsy (Figure 1b). 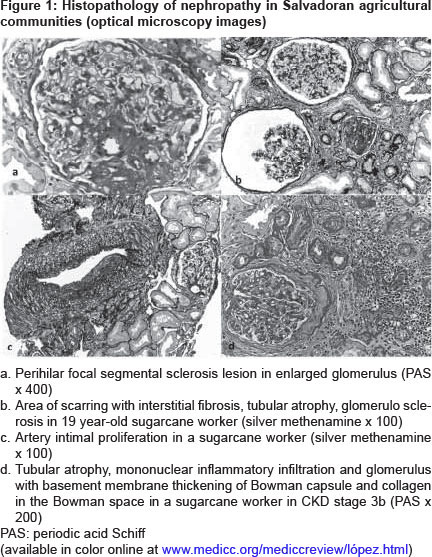 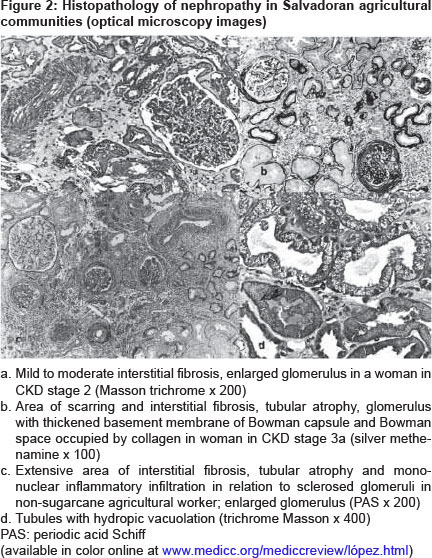 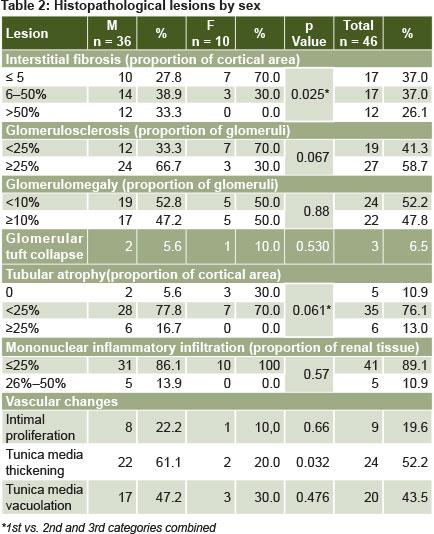 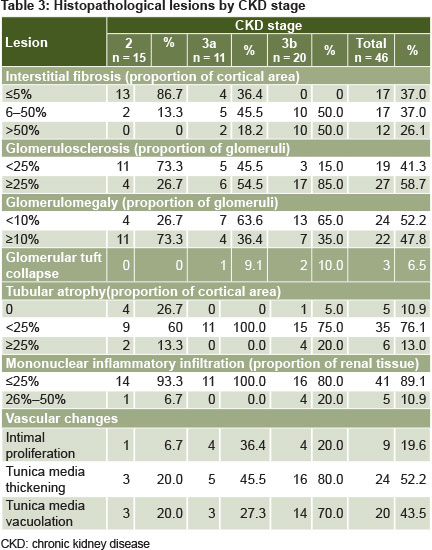 There was intimal proliferation in 6.7% of participants in stage 2 of the disease; however in stages 3a and 3b it was found in 36.4% and 20% respectively (Table 3). 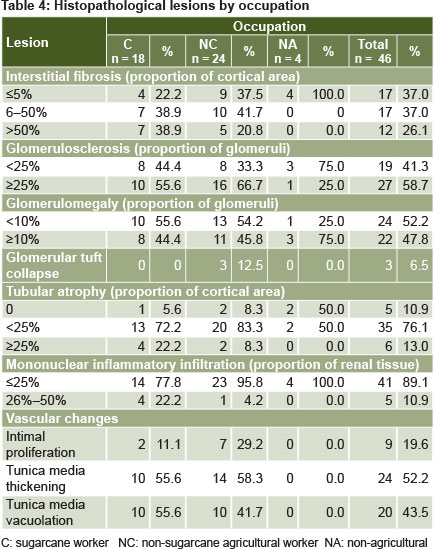 Glomerulomegaly ≥10% was observed in all three occupational groups, most frequently in those not working in agriculture (3/4, 75%) and least frequently in sugarcane workers (8/18, 44.4%) (Table 4).

In one patient there was thickening of the basement membrane in glomerular capillaries, with diffuse vacuolation and protrusion of basement membrane material in spikes at some sites. This person had generalized, diffuse IgG deposits of moderate intensity. The diagnosis was early membranous glomerulopathy with severe tubulointerstitial nephritis.

Other None of the biopsies showed endocapillary, extracapillary or mesangial proliferation. Masson's trichrome stain did not show fuchsinophilic deposits in any of the glomerular compartments (subepithelial, subendothelial or membranous), nor did it show fibrinoid necrosis or leukocyte infiltration in the tuft. Immunofluorescence techniques to detect immunoglobulins and complement found nonspecific deposits of IgM (25 patients), C3 (18) and C1q (8) in the glomeruli; 16 patients had no deposits. None of the biopsies showed immunoglobulin deposits in the tubules or interstitium.

CKDu was found in Salvadoran agricultural communities, predominantly in male agricultural workers, but also in women and adolescents. Thus, various factors that could contribute to developing the disease were taken into account in the clinical study: extreme poverty, environmental contamination due to misuse of agrochemicals, unsafe working conditions with exposure to high temperatures and toxic substances, in addition to excessive use of NSAIDs. In this paper, we analyzed histopathological findings in relation only to age, sex, occupation and disease stage. The two most discussed hypotheses concerning the cause of this new disease are chemical nephrotoxicity, and renal tissue ischemia secondary to dehydration and heat stress under harsh working conditions, so it is important to bear these in mind in interpreting the histopathology.[14]

Biopsy findings ruled out a diagnosis of glomerulonephritis due to incompatibility with the pattern and intensity of deposits seen in immunofluorescence studies.[13] Morphology was consistent with tubulointerstitial nephritis, but in different degrees depending on sex, occupation and CKD stage. Interstitial fibrosis was common to most biopsies and was associated with CKD stage. Some women in CKD stage 2 and some men who did not work in agriculture (that is, were not subject to such extreme working conditions) also had intersticial fibrosis, but to a lesser degree.

Wijkstrom studied eight Salvadoran patients, whose kidney biopsies examined at the Karolinska University Hospital showed mild to moderate tubular atrophy and interstitial fibrosis. They also showed generalized glomerulosclerosis in 29% - 78% of patients. From this, the authors concluded that the fibrosis was secondary to the glomerular damage.[11] However, since the patients studied (all male) were in advanced stages of CKD, in which there is usually damage to all kidney tissue compartments,[1] these histopathological findings were only to be expected and cannot be used to establish relative order of appearance.

In our research, glomerular damage was found in most patients: even in women and younger patients, independent of occupation.[13] In patients in CKD stage 3, it becomes more evident, explaining the decreased kidney function.

The severe tubulointerstitial damage with areas of tubular atrophy and severe fibrosis observed in the patient diagnosed with incipient membranous glomerulopathy are not seen in early membranous glomerulopathies; therefore, either there are two coexisting diseases or the damage was secondary to some other process (such as cancer or medication). We cannot discount either possibility.[16,17]

Segmental sclerosis observed in one patient was interpreted as the onset of generalized glomerulosclerosis, because of the appearance of nonspecific IgM and C3 deposits on immunofluorescence that suggested generalized sclerosis beginning as a perihilar lesion.[18] Furthermore, there were no clinical or laboratory findings suggesting an initial glomerular insult.

Mononuclear inflammatory infiltration was observed in areas of atrophy and glomerulosclerosis. Chronic pyelonephritis has a similar pathological appearance, but was ruled out due to absence of any clinical, laboratory or imaging history compatible with that diagnosis.[23]

Findings very similar to ours were described for biopsies of 57 CKDu patients in Sri Lanka. Glomerulosclerosis was the most frequent lesion. Although interstitial inflammatory infiltration was absent in 40% of cases, there were only 4 without interstitial fibrosis, suggesting that tubulointerstitial damage is the main pathological event in the CKDu, with glomerulosclerosis occurring secondarily.[10] Other researchers in Sri Lanka have investigated toxic environmental factors as the possible cause of Sri Lankan endemic nephropathy. They found high concentrations of arsenic in urine of CKD patients[24] and high concentrations of cadmium in well water where the patients lived,[25] suggesting these heavy metals as a source of environmental contamination.

Lead is one heavy metal long known to cause damage similar to what we observed. Cramér studied kidney biopsies from patients exposed to lead and found tubular damage and interstitial fibrosis without damage to glomeruli and vasculature.[26] While some of our findings were consistent with longterm exposure to heavy metals, we did not observe nuclear inclusion bodies or any other sign of acute lead poisoning.

This research is the first in the Americas to study the histopathology of a large number of patients in different stages of CKDu. One limitation is lack of ultrastructural study with electron microscopy, which could provide more details to the general description of lesions.

The most important and striking lesion in the cases studied, interstitial fibrosis, accompanied by glomerular damage (in most biopsies) and classic tubular atrophy, led to the histopathological diagnosis of chronic tubulointerstitial nephritis, since it increased directly with CKD stage. More research is needed to define the fundamental and contributing causes of CKDu, whether toxic environmental or other occupational exposures, chronic ischemia from dehydration, or nephrotoxic medications, all of which are compatible with the histopathological picture we observed and the social and epidemiologic context of the epidemic. Our findings are also consistent with a multifactorial etiology for this disease.