INTRODUCTION: Over the last 40 years, high smoking prevalence has been reported throughout Cuba, including in Cienfuegos city in the central part of the island.
OBJECTIVE: Determine smoking prevalence and potential associated risk factors in Cienfuegos city for 2010-2011.
METHODS: A descriptive cross-sectional study was conducted in Cienfuegos city in the context of CARMEN (Collaborative Action for Risk Factor Prevention & Effective Management of Non-communicable Diseases), a PAHO multi-country initiative for a multidimensional approach to chronic non-communicable diseases. Participants totaled 2193 (aged 15-74 years), randomly selected through complex probabilistic three-stage sampling. Variables examined in relation to smoking included age, sex, skin color, civil status and educational level.
RESULTS: Approximately 25% of those surveyed were smokers (30.3% of men and 21.0% of women). For men, prevalence was highest in the groups aged 25-34 and 55-64 years; for women, in the group aged 45-54 years. Concerning skin color, smoking rates were higher among black and mestizo persons (29.5%); and concerning civil status, higher among those who were separated, widowed or divorced (30.0%). Smoking prevalence fell with higher educational level; in keeping with that trend, the university-educated group had the lowest prevalence (16.2%).
CONCLUSIONS: Although one in four Cienfuegos residents aged > 15 years smoked in 2010-2011, prevalence there is lower than in previous surveys. Knowledge of differences observed in age, sex, skin color, civil status and educational level can be useful for planning future smoking prevention and control actions.

WHO estimates that in the early 21st century, smoking has continued at epidemic levels. Close to 30% of the global population aged > 15 years smokes, despite a downward trend observed in recent years, primarily in high-income countries.[1] Studies on smoking prevalence, however, have reported extremely heterogeneous data, making comparisons difficult in many cases. The main reasons for these difficulties are: differences in sampling methods, definitions of smoking, the population's demographic structure, age groups included, as well as time and place of study.[1]

Ever since data became available on smoking in Cuba, prevalence has been considered high. The earliest national-level data on smoking prevalence date back to 1978. A survey conducted by the Ministry of Domestic Trade showed that 68.9% of the population aged > 17 years smoked.[2] In 1980, a study by the Cuban

Since then, the municipality of Cienfuegos (2012 population 160,000) has been systematically monitored, first by the Cienfuegos Global Project[8] in the 1990s, and from the turn of the century by a PAHO's multi-country initiative on chronic non-communicable diseases (NCDs), CARMEN (Collaborative Action for Risk Factor Prevention & Effective Management of NCDs).[9] Through this process, abundant data have also been collected on prevalence of risk factors associated with various NCDs in this municipality. Among these, smoking prevalence in Cienfuegos has been closely monitored and is one of the most studied subjects throughout the province, using periodic surveys conducted with the CARMEN methodology.

A study was conducted in the second stage of the CARMEN initiative to determine smoking prevalence and potential associated risk factors in Cienfuegos city for 2010-2011.

Using the CARMEN framework, a descriptive cross-sectional study was conducted in 2010-2011 in Cienfuegos city, the capital of Cienfuegos Province (in central Cuba, some 240 kilometers east of Havana). The city had a population of 126,273 inhabitants aged 15-74 years when the study began.[13]

A desired sample size of 2400 was calculated: 12 groups with 200 participants each, formed by 10-year age subgroups (15-24, 25-34, 35-44, 45-54, 55-64, 65-74), each including both sexes. Complex probabilistic three-stage sampling was used. Sample units were census districts, areas and sections (made up of 5-7 houses) in Cienfuegos city. Individuals in each household were then selected probabilistically, ensuring that each group had the number planned. Specialists from the local branch of the Provincial Statistics Office participated in all phases of the process. Details of the sampling methods have been published previously.[13]

Data were collected using the CARMEN-recommended question-naire.[9] The interviewers, health professionals trained for this task, visited households selected for the sample, surveying a total of 2193 individuals.

Data recorded from questionnaires were first entered into a Microsoft Access database programmed for the study and transferred to the SPSS Complex Samples-15 model for statistical analysis and calculation of estimates with 95% confidence intervals. The sample was weighted to population subgroup distribution in Cienfuegos city as of study initiation. Rates were adjusted for age and sex. Results were presented in tables and figures, by relative frequencies with their confidence intervals. In some cases, the Pearson chi-square test of independence was applied to compare results among groups. The statistical significance level was set at 0.05.

The Medical University of Cienfuegos research ethics committee approved the initial project and each theme analyzed in the study. All survey participants gave prior written consent. 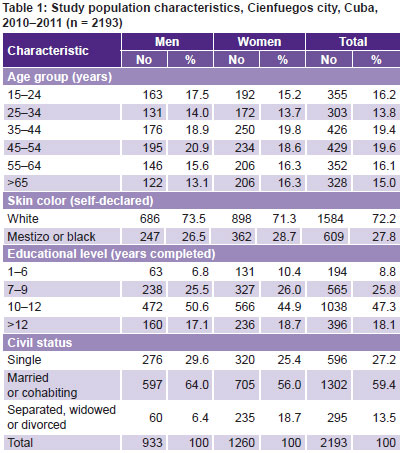 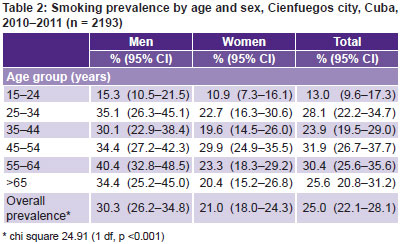 Higher rates were observed in mestizo or black persons (29.5%), and this held true for men (35.7%) as well as women (25.1%). Prevalence was higher in the separated, widowed or divorced than in those with other civil status. Finally, as educational level rose, smoking prevalence fell, resulting in the lowest rates among university graduates (16.2%) (Table 3). 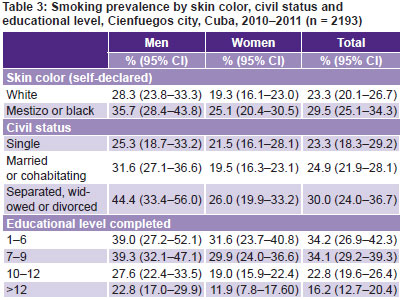 Smoking declines have been more marked over the last ten years (i.e., between the 2001-2002 and 2010-2011 surveys). These results contrast with statistics from the 1990s, when smoking prevalence remained almost constant (from 1991-1992 to 2001- 2002), in the midst of Cuba's serious economic crisis, despite multiple shortages and the high cost of tobacco products, as well as public education campaigns.[2]

Strategies to combat the smoking epidemic include health information and education, appropriate legislation, and availability of smoking cessation services. Activities have been conducted in all three of these areas at national, provincial and city levels, although much remains to be done.[2,14,15]

One explanation for the more encouraging recent results could be that long-term effects of previous interventions are now being felt at both community and individual levels,[14,16] especially in reducing smoking among younger age groups. However, it is important to remain vigilant. Two main objectives of the antismoking campaign are: reduce the number of young people who start smoking and among those who do pick up the habit, delay onset as long as possible; and reduce the number of current smokers by providing counseling services to help them quit.[15]

The issue of women and smoking has been widely addressed because of negative repercussions in this population. One of the most serious is the recent rise in lung cancer in women in Cuba in general-and women in Cienfuegos Province in particular-making it their primary cause of cancer death.[18] Another often-neglected factor is the accelerated rise in post menopausal osteoporosis, which causes significant morbidity and disability in older women.[19] In January 2013, the New England Journal of Medicine and the BMJ (formerly British Medical Journal) published new research on smoking risks for women.[20,21]

The higher prevalence found among mestizo and black Cienfuegos residents, already reported as of 1991-1992,[8] could be related to socioeconomic conditions, educational level, or other factors not part of this study. Research on hypertension in Cienfuegos city concluded that there were no differences among white, black and mestizo residents in terms of availability of and access to health services, but there were differences in terms of adherence to therapy, which could also be influenced by socioeconomic and educational factors.[12,22] Our results thus alert us to the need to further investigate associations of skin color, socioeconomic conditions, educational level and other factors, to determine how these may relate to smoking, in order to better target actions to further reduce smoking in these populations.

Another interesting result has been the higher prevalence of smokers among separated, widowed or divorced persons, as was observed in the 1991-1992 survey.[8] Differences by civil status cannot be interpreted in isolation, since other variables such as sex, age, educational level, drinking prevalence and socioeconomic status can also influence results. This does not mean that this should not be considered as a factor, particularly because it has been a consistent result over time, at least in Cienfuegos city.[8]

The higher smoking prevalence among less educated participants (34%), twice as high as for university-educated persons (16%), although predicted, underscores the importance of education in curbing risk behaviors. In 1991-1992, smoking prevalence in non-university-educated individuals (37%) was higher than among university graduates (25%).[8] The good news is that higher educational levels achieved over the last 20 years appear to have effectively acted as a protective factor. In the 2010-2011 CARMEN survey 18.1% of the adult Cienfuegos population was university educated,[9] up from 9.1% in 1991 (unpublished data). In any case, the educational level of the smoking population is an important factor to consider in designing and organizing antismoking media campaigns, as well as in the language and forms of expression used in these campaigns.

Smoking prevalence in Cienfuegos city was markedly lower in 2010-2011 than in previous surveys. Knowledge of differences in smoking prevalence by age group, sex, skin color, civil status and educational level can be useful for instituting new actions in public health and tobacco control in this Cuban municipality.