OBJECTIVE: Obtain a Portuguese version of the Kiddo-KINDL questionnaire that is semantic and culturally equivalent to the original version.
METHODS: For the adaptation, the methodology of direct and inverse translation was used. The questionnaire was applied to groups from three schools in Uberlândia, MG - Brazil, and comprised of 378 children and adolescents aged between 12 and 16. 16% of the students were randomly selected to repeat the test. In the statistical analysis, the following aspects were appraised and analyzed such as: lost data, floor and ceiling effect, internal consistence of the item and reliability of the internal consistence of the scales.
RESULTS: The percentage of lost data in the scales was low varying between 1.6% to 2.57%, which indicates good acceptability of the questionnaire. The rates of floor and ceiling effect were lower than 12% suggesting that the instrument is sensitive to detect differences in quality of life related to the health of the children and adolescents ranked within the extreme ends. The Kiddo-KINDL as a whole has shown high reliability (Alpha Cronbach = 0.79).
CONCLUSION: The Kiddo-KINDL is a reliable tool to be used with children and adolescents in Brazil, and has provided important data of multidimensional nature.

The interest in evaluating quality of life (QL) has increased in the field of public health. The ability to use QL as a measurement of significance in clinical and epidemiologic studies has led to several studies, and to the development of numerous tools 1,2,3.

Among so many concepts, Guyatt et al4 (1993) suggest that QL is a term which represents the attempt to name certain characteristics of human experience, from the individual's own perspective through his/her subjective perception, and its central factor is the feeling of well-being. Assumpção Jr. et al5 (2000) also point out that QL is a central concept which determines the subjective feeling of well-being also for children, and that they are and have always been able to express themselves regarding this subjectivity.

For children, QL has been defined as a subjective and multidimensional concept, which includes functional capacity and psychosocial interaction of the child with his/her family6. However, health-related quality of life (HRQL) aims to assess the impact of an illness or worsening of quality of life7.

In the past decade, great emphasis has been placed on values and the perception of the patient as to his/her own health, and several tools have been developed for this purpose8. However, in Brazil the HRQL for children and adolescents has not been studied much, and there has been a demand for specific tools aimed at this age group that are valid, reliable and that can be used with both youngsters and their guardians (parents).

The KINDL questionnaire was originally developed by Bullinger & Ravens-Sieberer9 (1995) and revised by Ravens-Sieberer & Bullinger10 (1997) to be used for both healthy and sick children and adolescents. It has a Cronbach's Alpha of above 0.711. Furthermore, it was used and tested in several prospective and epidemiologic studies which involved over 5,000 healthy and chronically ill children12.

The KINDL is available in eleven languages (German, English, French, Italian, Spanish, Greek, Dutch, Turkish, Norwegian, Swedish and Russian). However, there is no culturally adapted version to the Portuguese language. Due to the importance of the theme and the shortage of tools in Portuguese to assess adolescents' quality of life14, the objective of this study was to carry out a cultural adaptation in order to obtain a Portuguese version of the Kiddo-KINDL questionnaire (aged 12 to 16), semantically and culturally equivalent to the original German version and to assess its applicability, reproducibility and reliability.

The KINDL questionnaire is comprised of 24 (twenty-four) questions, spread across six scales. Each scale corresponds to a dimension of quality of life: physical well-being, emotional well-being, self-esteem, family, friends and daily routine (school). The score attributed to each answer goes from 1 to 5 for questions with a positive direction and from 5 to 1 for the negative ones (Figure 2a). Scores can be expressed either by addition or by the mean. Furthermore, total points can be expressed in percentage, which can be calculated both for the scale and for the total questionnaire (Figure 2b). 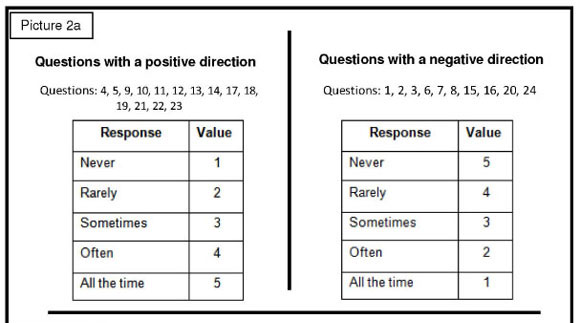 The sample was comprised of 378 adolescents enrolled in three schools in the city of Uberlândia in the state of Minas Gerais. The criterion used in selecting the schools took into account administrative heterogeneity (public and private schools), geographical location (two schools in the central and one in the peripheral area), and the representativeness of the socioeconomic profile of their students. Therefore, one public school (PS) was chosen in the peripheral area and two in the central area, one private (PS) and one public (PS). The selection of these three types of schools provided a more heterogeneous sample. The study involved adolescents, 12 to 16 years of age, enrolled in one of the selected schools, who had a good level of comprehension and understanding and also had handed in the consent form, duly signed by their parents.

The questionnaire was applied collectively in a classroom between June 29 and July 9, 2009. Two researchers handed out the questionnaires and gave instructions on how to answer them independently.

The Statistical Package for Social Science (SPSS), version 16.0, was used for data analysis. The rates of floor effect and ceiling effect were calculated for each scale in all questionnaires and were considered suitable when below 15%15. The Intra-class Correlation Coefficient was used to assess test/re-test reliability. Toward that end, the questionnaire was given to 16% of the same group of students chosen randomly and seven days apart.

To validate the scale, that is, to check whether it measures what it is meant to measure16, exploratory factorial validation was used, which analyses construct validity17 and content validity, using analysis of the main components and varimax rotation. A Cronbach's Alpha coefficient was calculated for each scale to check the reliability of internal consistency; for comparing groups, measures with a minimum reliability of 0.5 to 0.7 or preferably higher, are recommended18. The Pearson correlation coefficient was calculated for the six scales.

The present study was submitted for appraisal to the Ethics Committee for Research of the Centro Universitário do Triângulo; the selection of schools began and data were collected after approval.

During the translation process, questions were not translated literally because most languages do not allow for purely technical translations. In the translation and adaptation of the Kiddo-KINDL questionnaire, adjustments to three questions (Table 1) were necessary. This table shows the English version as well as translator 1 and 2's version and the consensus between both translations.

Out of the 465 pre-selected youngsters, there were 87 losses, five adolescents whose parents did not give authorization and 82 who did not bring a signed parental consent form, meaning they could not participate in the study. Finally, 378 youngsters were included in the sample and answered the questionnaire in a session lasting approximately 15 to 20 minutes per class.

The tool revealed 0.84 conformity in the intra-class correlation test. The Kiddo-KINDL internal consistency measured by Cronbach's Alpha was 0.79 for the total scale and varied from 0.12 to 0.73 in the physical well-being and family scales, respectively (Table 3).

Exploratory factorial analysis was used to assess the construct validity of the tool, checking whether if it really presents a six-factor structure (Table 4). This analysis resulted in six self-values above 1.0, which are: 5.13, 2.18, 1.76, 1.40, 1.11 and 1.05, and account for 52.61% of total variation, using varimax rotation. In table 4, the charts including the factor load signaled the factors which best related to the respective scale.

This study assessed the psychometric proprieties of the Kiddo-KINDL questionnaire in Brazilian Portuguese. The percentage of lost data in the scales was low, as observed in other studies 20,21,22,23. This information, along with a small loss in the given sample, displays good acceptability and performance of individuals, when participating in the survey and when they answered the questionnaires.

The rates of ceiling and floor effects found reproduced, by and large, the results of other studies20,22,24, indicating that the tool can accurately detect the differences of quality of life between the adolescents situated in the extremes, that is, with the best or worst scores.

The reliability of the total scale was good on the whole (Cronbach's Alpha =0.79). Furthermore the scales presented suitable values of reliability (Cronbach's Alpha >0.5)18, except for physical well-being and daily routine. In another validation of the same questionnaire, these two scales were also the ones that revealed lower scores of internal consistency23,26. A possible justification for this can be due to problems of cultural adaptation, aggravated by the fact that the scale has many subjective concepts; it has a heterogeneous content and is comprised of only four questions. Moreover, the fact that the sample included only healthy youngsters may have contributed to the fact that the reliability of the physical well-being scale revealed such low values.

The internal consistency values of the answers obtained via the Cronbach's Alpha reliability coefficient were satisfactory and similar to other validations of the same questionnaire23,27,28,29. It is worth noting that Cronbach's Alpha of the whole scale showed higher values than those revealed in each separate scale. This is due to the fact that the greater the number of items, the higher will its rate of accuracy be, because according to Bernoulli's theorem, errors tend to be nil when the number is close to infinite17.

Results obtained in exploratory factor analysis were similar to those found by Helseth & Lund27 (2005), who obtained 57% of total variation when considering six factors. The factors can be interpreted as follows:

a) Factor 1 can be considered the Friends factor, because the items of this scale reveal a high load with this factor, except for item 20, which was more identified with factor 6, and which in turn varied between emotional well-being and school. A possible explanation can be the fact that the school is a place where friendship ties are more evident in the children's lives and because they spend many hours of each day there. The interpretation of this factor is weakened by the load of items 5 and 7 (emotional well-being) and of items 9, 11 and 12 (self-esteem), which revealed moderate to low load with this factor.

b) Factor 2 is related to Physical well-being, which shows a high load with the items of this scale. However, items 7 and 8 (emotional well-being), 11 (self-esteem) and 20 (friends) jeopardize the interpretation.

e) Factor 5 presents high and moderate loads with the items of the School scale, except for item 21. Item 8 (emotional well-being) presented a low load with this factor.

f) Factor 6 did not present a definite pattern, showing a high to moderate load with items 6 and 7 (emotional well-being), 20, 21 and 22 (daily routine - school). This can be attributed to the close tie between the school environment and emotional well-being. According to Carson & Bittner (1994)30, experiences linked to the school environment can alter students' emotional state, which can lead to unhealthy outcomes such as phobias, physical complaints and depressive episodes.

The rationale for the interpretation of factors is the correlation between scales, and the fact that all correlated with the total score. One can see that the correlations involving the emotional scale were relatively higher in all the other scales, except for school; this fact can justify the lack of definition of a specific factor representing emotional well-being.

Therefore, we believe that the Kiddo-KINDL is a reliable tool to be used with children and adolescents in Brazil, providing relevant data of a multidimensional nature. Moreover, it can be used as a model for similar procedures to be carried out and for developing new standardized tools in Brazil.

Conflicts of Interest: The authors declare no conflict of interests.