A descriptive cross-sectional study of a series of cases that included 122 women treated, 79 (75%) for low grade SIL (LSIL) and 43 (35%) for high grade SIL (HSIL) attending at the HPV Laboratory at the Health Sciences Research Institute (IICS), National University of Asunción (UNA), for post-treatment control during period 2006/2010.

Cervical cancer is the third most frequent type of cancer in women worldwide, including 529,828 new cases and 275,128 deaths in 2008, of which 31,712 occurred in Latin America and the Caribbean. A total of 85% of new cases take place in developing countries. The standard incidence rate by age in South America is 24.1 cases/100,000 women. In Paraguay, the incidence and mortality rates are 35.0 and 16.6/100,000 women, respectively. These rates are significantly higher than those recorded in neighboring countries such as Argentina, Brazil, Uruguay and Chile1.

The cytological diagnosis (Papanicolaou test) is a simple low-cost method used to detect the cytopathic effect of this virus, although not determining the viral type. As the HPV does not grow in traditional cell cultures, molecular methods have been recently used to identify the viral genotype, such as the Hybrid Capture II(r) test (HC-II(r)), which detects 13 types of HR-HPV and enables the viral load to be estimated6,7.

There are no treatments that can eliminate an HPV-related infection, they can only remove the lesions produced by this virus. The methods used for this treatment are as follows: Loop Electrosurgical Excision Procedure (LEEP), cryotherapy and cervical conization. Although HPV-related intraepithelial lesions can be treated, there is a chance of recurrence or even the development of cervical cancer. If the lesion extends to the endocervical surgical margin, the risk of failure is higher. Moreover, women who have lesion-free surgical margins show a risk of treatment failure of 2-6%, regardless of the treatment used. The cumulative rate of invasion eight years after treatment is 5.8 cases/1,000 women, which is five times higher than that of the general population8-14.

In addition to considering the compromised surgical margins as a recurrence factor, there are other factors that promote the persistence or recurrence of squamous intraepithelial lesions (SIL) after treatment, such as age, parity, cytological diagnosis and degree of lesion prior to treatment15.

As a result, a continuous and thorough follow-up is important after the treatment. Recent studies suggest that the combined use of cytology and the HC-II(r) test increases effectiveness when selecting women at risk of developing residual or recurrent SIL after six months of treatment16-19.

In Paraguay, previous studies have observed a high frequency of HR-HPV in women without cervical lesions and cofactors of risk (a high number of sexual partners and multiparity, among others) associated with the development of cervical cancer, comparable to or higher than those identified in other developing countries, which could partly explain the high incidence of such type of cancer in this country20-23.

In Paraguay, there have been no studies on the frequency of HR-HPV in women treated for SIL. Thus, considering the high-risk sexual behavior of Paraguayan women, which could promote post-treatment viral infection and increase the risk of recurrence, the present study aimed to determine the frequency of HR-HPV using the HC-II(r) test, according to cytological results in women treated for cervical SIL, between 2006 and 2010.

A descriptive cross-sectional study of a series of cases was conducted with 122 women treated for cervical lesions who sought the Department of Public Health and Epidemiology of the Instituto de Investigaciones en Ciencias de la Salud (IICS - Health Sciences Research Institute) of the Universidad Nacional de Asunción (UNA - National University of Asunción), between 2006 and 2010, with a medical recommendation to have the HC-II(r) test performed for HR-HPV detection.

The treated women who went to the IICS-UNA originated from different public and private health centers of the Central Department of Paraguay. The present study included women who had a cytohistological diagnosis of their lesions prior to the treatment, were treated at least six months before, and had an updated cytological diagnosis performed after the treatment, when the HR-HPV was detected by the HC-IIâ test. Women who sought the IICS, UNA, more than two years after the treatment had been performed were excluded from this study. The treatment applied depended on the medical criteria and was based on the Paraguayan Manual on Norms and Procedures for Cervical Cancer Control and Prevention, developed by the Ministry of Public Health24.

Prior to treatment, of all 122 participating women, 79 had a confirmed histological diagnosis of low-grade SIL (LSIL) and 43 of high-grade SIL (HSIL). Of all women, 97 underwent LEEP and 25, cervical conization.

All women completed a questionnaire that included demographic, socioeconomic, gyneco-obstetric and sexual behavior characteristics. All information was processed while protecting patients' confidentiality. This research project was approved by the Research Ethics Committee of the IICS of the Universidad Nacional de Asunción, under number M07/10.

The minimum sample size of 144 women treated was calculated using the table in the 13E Appendix for a descriptive study with a dichotomous variable, considering 30% of expected frequency of HR-HPV after the treatment, an amplitude (ω) of 0.15 and a 95% confidence interval (95%CI)25.

The cytological analysis was performed in the participating health centers. Samples were obtained by Pap smear and placed on polished microscope slides that were properly identified. These slides were fully immersed in a wide-rimmed container with 96% ethyl alcohol for 15 minutes. Slides were subsequently removed from the container and left to dry for ten minutes. Finally, fixing spray was applied to them. The cytological results were classified according to the 2001 Bethesda system26.

The study sample was collected in the IICS, UNA, using a cytobrush, which was introduced into a collection tube provided by its manufacturing company, Qiagen (Germany).

The samples were processed with the HC-IIâ test, which detects 13 types of HR-HPV: 16, 18, 31, 33, 35, 39, 45, 51, 52, 56, 58, 59 and 68. Following the manufacturer's protocol, the cervical samples were treated with sodium hydroxide, aiming to denature the DNA. The simple-stranded DNA was hybridized in a solution with a cocktail of RNA probes from the 13 types of HR-HPV. Each reaction mix including RNA-DNA hybrids was transferred to microplates sensitized with anti-hybrid antibodies, enabling their immobilization. The RNA-DNA hybrids bound to antibodies were put into contact with a second antibody conjugated with alkaline phosphatase. The non-binding material was removed by successively washing it, and a chemiluminescent reactive (Lumi-Phos 530) was subsequently added as substrate for the alkaline phosphatase. The luminescence produced by this reaction was measured with a luminometer. The unit of measurement of light was expressed as relative light units (RLU). Positive and negative controls originated from Qiagen were used in triplicate.

It should be emphasized that professionals who participated in the sample processing and reporting of results from the HC-II(r) test were blind to the cytological results. Consequently, the results of both methods were analyzed independently.

Data analysis was performed using descriptive statistics procedures and the Epi Info software, version 3.2 (CDC, Atlanta, USA). Chi-square analysis was performed to identify the association among type of treatment, length of time since the treatment and frequency of HR-HPV infection, using the Epi Info software, version 3.2. A p-value <0.05 was considered to be significant in all data analyses performed.

The mean age of the 122 participating women was 34 ± 10 years (95%CI 17-67). Information about socioeconomic characteristics, obstetric history and sexual behavior could be obtained from 86% of the study population (105/122 women) (Table 1).

It should be emphasized that there were no significant differences among frequencies of HR-HPV according to type of treatment, and 27/97 (28%) women treated with LEEP and 7/25 (28%) treated with cervical conization had the viral infection (p = 0.7).

With regard to the length of time since the treatment, there were no significant differences in frequencies of HR-HPV between women who had a test to detect viral infection until one year after their treatment (32% 25/77 women) and those who did so after one year (20%, 9/45 women), p = 0.1.

There is a high incidence of pre-neoplastic lesions and cervical cancer in Paraguay, which are considered to be a public health problem. The present study showed preliminary results of HR-HPV detection with the HC-II(r) test, according to the cytological diagnosis performed in women treated for SIL.

The results found in the present study suggest that the frequency of HR-HPV in treated women does not vary according to the type of treatment and length of time spent to perform the post-treatment control (until two years), which could be due to other factors playing a role in the persistence of post-treatment HR-HPV infection. Previous studies observed that women with HSIL infected with HPV-16, 18, 33 and 45 and those with multiple types of HPV prior to LEEP or cervical conization have a significantly higher frequency of viral infection recurrences after the treatment15,36,37.

The present study had certain limitations, due to the impossibility of completing the sample comprised of 144 women and the lack of data on women's relative viral load prior to the treatment. Nonetheless, the results observed suggest that the use of the HC-II(r) test for HR-HPV detection and determination of relative viral load as a complement to the cytological diagnosis could contribute to the identification of women treated for pre-neoplastic lesions at a greater risk of having recurrences. The data obtained could help to strengthen the Paraguayan Cervical Cancer Prevention, Detection and Treatment Program, developed by the Ministry of Public Health and aimed at improving the service provided by Primary Health Care units. 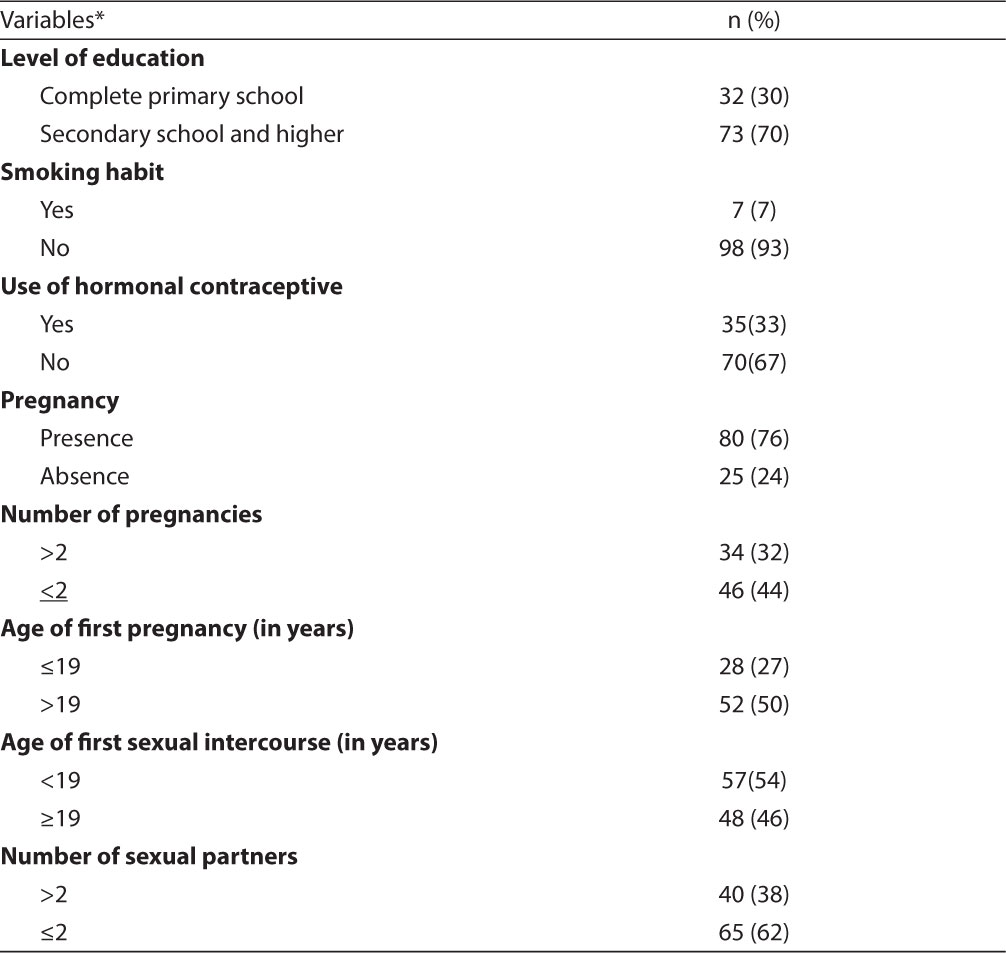