Lipid intake may be related to MetS, although other factors also need to be considered, such as lifestyle, genetics and metabolism.

The available evidence indicates that, in most countries, between 20 and 30% of the adult population can be characterized as having MetS. In parts of the developing world, in which young adults predominate in the population, the prevalence of MetS is lower; but with increasing affluence and an aging population, the prevalence will undoubtedly rise33. Grundy SM. Metabolic syndrome pandemic. Arteriocler Thromb Vasc Biol 2008; 28(4): 629-36.. In Latin America, the general prevalence of MetS is estimated at 24.9% and it is found more frequently in women than in men (25.3 versus 23.2%)44. Márquez-Sandoval F, Macedo-Ojeda G, Viramontes-Hörner D, Fernández Ballart JD, Salas Salvadó J, Vizmanos B. The prevalence of metabolic syndrome in Latin America: a systematic review. Public Health Nutr 2011; 14(10): 1702-13.. In Brazil, a systematic review with ten cross-sectional studies identified a general prevalence of MetS of 20.6% (range: 14.9 - 65.3%)55. De Carvalho Vidigal F, Bressan J, Babio N, Salas-Salvadó J. Prevalence of metabolic syndrome in Brazilian adults: a systematic review. BMC Public Health 2013; 13: 1198..

Diet and physical activity are the ﬁrst choice for treating MetS, but little is known about what methods are effective. An energy-prudent diet coupled with moderate levels of physical activity favorably affects several components of MetS. However, the effects of macro and micronutrients in the treatment of MetS are still mostly unknown66. Magkos F, Yannakoulia M, Chan JL, Mantzoros CS. Management of the metabolic syndrome and type 2 diabetes through lifestyle modification. Annu Rev Nutr 2009; 29: 223-56..

In this context, it is crucial to understand the link between dietary patterns and the occurrence of MetS, with the aim of proposing new strategies of intervention. There are a lot of controversial findings in the literature about how fatty acids intake affects the development of MetS77. Abete I, Goyenechea E, Zulet MA, Martínez JA. Obesity and metabolic syndrome: potential benefit from specific nutritional components. Nutr Metab Cardiovasc Dis 2011; 21(Supl 2): 1-15.. The World Health Organization (WHO) published in 2011 dietary recommendations on fatty acids, aiming at the prevention of chronic diseases, such as MetS. In accordance to this organization, saturated fatty acids (SFA) should represent 10% of dietary energy and its excess contributes to raise LDL and total cholesterol/HDL cholesterol ratio in comparison to monounsaturated (MUFA) or polyunsaturated (PUFA) fatty acids. These two types of fat should represent 15 - 20% and 6 - 11% of dietary energy, respectively. Linoleic fatty acids participation in the diet should be of 2.5 - 9.0% and the impact of its consumption is the lower risk of fatal coronary heart disease (CHD) events88. World Health Organization. Interim Summary of Conclusions and Dietary Recommendations on Total Fat & Fatty Acids. From the Joint FAO/WHO Expert Consultation on Fats and Fatty Acids in Human Nutrition, 2008. Geneva: WHO; 2011..

The present study aimed to examine the possible relation between fatty acids intake and MetS status among overweight and obese Brazilian women.

This was a cross-sectional study conducted among overweight and obese female residents in São Paulo, Brazil, which was approved by the Research Ethics Committee of the Federal University of São Paulo (UNIFESP) (No. 0972/06). This study made use of data from 223 overweight and obese women who were selected through announcements in printed media (small-circulation newspapers), outpatient clinics and public places, which invited women to enroll in a weight reduction program.

To select these women, the following inclusion criteria were adopted: aged between 25 and 48 years and with a body mass index (BMI) between 25 and 39.9 kg/m2. The following were taken to be exclusion criteria: presence of chronic diseases other than obesity (renal diseases, diabetes, hypertension, hyper or hypothyroidism or hepatic diseases) that were found at the clinical assessment or were self-reported; frequent use of medications (antidiabetics, anticonvulsants or corticosteroids); intense practice of physical activity; and pregnancy or lactation. These medications and these conditions were excluded because they can influence body weight and fat consumption. In addition, women that were receiving nutritional counseling were also excluded.

After agreeing to participate in the study, which was formalized through signing an informed consent, the participants were interviewed by trained investigators using standardized questionnaires constructed specifically for this study. Women were asked for their age, food intake, blood pressure, anthropometric and biochemical data.

The food intake evaluation consisted of the assessment of energy and lipid fractions intake. Three-day food diaries were used in accordance with suggestions by the Institute of Medicine99. Institute of Medicine. Dietary Reference Intakes: The Essential Guide to Nutrient Requirements. Washington, DC: IOM; 2006.. After the respondents completed the food diaries, a face-to-face interview was conducted to clarify portion size and verify completeness. Women were also asked about the ingredients used in cooking, which are known to be fat sources. A photographic food atlas was used to quantify portion size and the respondents were also asked to keep food packaging. Homemade recipes and measurements were standardized according to Brazilian composition tables. The data obtained were analyzed with the aid of the Nutrition Data System for Research (NDSR) software (University of Minnesota, 2005).

The statistical analyses were performed with the Statistical Package for the Social Sciences software(SPSS), version 12. The Kolmogorov-Smirnov normality test was performed. Student's t-test and one-way ANOVA were used to compare means between overweight and obese women. Mann-Whitney and Kruskal-Wallis tests were used to compare medians between these groups. The χ2 and Fisher's exact test were used to compare proportions. Analyses were made comparing obese and overweight women aiming to know if there were differences in the relation between MetS and fatty acids consumption in accordance to the body weight level.

This study included 152 overweight women and 71 obese women with a mean age of 35.2 (6.9) years. All of these women presented body fat percentages greater than the recommendations for their age group. In addition, 15.2% of this population presented MetS, which was 14.5% among the overweight women and 16.9% among the obese women (p = 0.638). The clinical and biochemical parameters and HOMA-IR were less favorable among the women presenting with MetS (Table 1).

Thumbnail
Table 3:
Occurrence of metabolic syndrome by quartiles of fatty acid intake adjusted for energy in the diet of overweight and obese women.

Results showed a high prevalence of MetS in the sample. Greater intake of monounsaturated, polyunsaturated, linoleic and trans fatty acids was associated with the occurrence of this disease among women. However, no relation between MetS and linolenic acid intake was observed.

Comparisons between the MetS prevalence data found in this study and the data found in other studies are limited by differences in methodological characteristics, ethnicity and diagnostic criteria for MetS11. Whayne TFJr. In defense of metabolic syndrome. J Clin Lipidol 2009; 3(4): 247-9.. In the present study, we focused on comparing prevalence data among studies that adopted the IDF criteria for MetS diagnosis.

In contrast to this evidence, experimental studies that explored the effect of monounsaturated fatty acid consumption on MetS are still inconclusive. Gulseth et al .2222. Gulseth HL, Gjelstad IM, Tierney AC, Shaw DI, Helal O, Hees AM, et al. Dietary fat modification and blood pressure in subjects with the metabolic syndrome in the LIPGENE dietary intervention study. Br J Nutr 2010; 104(2): 160-3. investigated the effects of an isoenergetic change in the quantity and quality of dietary fat on blood pressure in subjects with MetS. The study lasted 12 weeks, and 486 subjects were assigned to one of the 4 diets with distinct fat quantity and quality: 2 high-fat diets rich in saturated fat or monounsaturated fat, and 2 low-fat, high-complex-carbohydrate diets with or without 1 - 2 g/d of very long-chain omega-3 polyunsaturated fatty acid supplementation. There were no overall differences in systolic and diastolic blood pressure or pulse pressure between the dietary groups after the intervention.

Additionally, a study conducted among 548 adults investigated the effects of replacing the amount and type of fat on insulin sensitivity and cardiovascular risk. After the intervention period, which was different for each treatment and varied from 4 to 24 weeks, the study did not support the hypothesis that isoenergetic replacement of saturated fatty acids with monounsaturated fatty acids has a favorable effect on insulin sensitivity2323. Jebb SA, Lovegrove JA, Griffin BA, Frost GS, Moore CS, Chatfield MD, et al. Effects of changing the amount and type of fat and carbohydrate on insulin sensitivity and cardiovascular risk: the RISCK (Reading, Imperial, Survey, Cambridge and, Kings) trial. Am J Clin Nutr 2010; 92(4): 748-58..

However, caution should be taken when considering the data of the present study. The cross-sectional design does not enable the comprehension of causality. The consumption of ingredients rich in fat is also difficult to estimate. In addition, the three-day food consumption evaluation may not be sufficient to represent a habitual diet.

Results showed that women who had a greater intake of linoleic acid presented a greater risk of MetS. This finding is not compatible with the study conducted by Freire et al .2424. Freire DR, Cardoso MA, Gimeno SGA, Ferreira SRG. Dietary fat is associated with metabolic syndrome in Japanese Brazilians. Diabetes Care 2005; 28(7): 1779-85., in which increased intake (last quintile of intake) of linoleic acid was found to be a protective factor against MetS (OR = 0.50; 95%CI 0.26 - 0.98). However, there have been controversial findings regarding protective factors relating to metabolism. Hekmatdoost2525. Hekmatdoost A, Mirmiram P, Hooseini-Esfahani F, Azizi F. Dietary fatty acid composition and metabolic syndrome in Tehranian adults. Nutrition 2011; 27(10): 1002-7. did not find any relation between dietary intake of linoleic acid and MetS diagnosis among an Iranian adult population (n = 822).

It should also be noted that the four studied groups (overweight women with and without MetS and obese women with and without MetS) are very similar and might be in different phases or steps of the same disease (adipose tissue accumulation and insulin resistance development). The analysis of the association between MetS and nutrients reflects the association between fatty acids and insulin resistance. Regardless of the presence or absence of MetS, all women had excessive adiposity and similar rates of HOMA-IR, which shows that insulin resistance was very similar among the participants. This might explain why the results were unexpected or so different between the groups according to the type of fatty acids.

Finally, it is important to present limitations of the study. As specified, the cross-sectional design does not enable the comprehension of causality. A three-day consumption report may not be sufficient to evaluate habitual intake, and ingredients rich in fat are usually forgotten by individuals in food consumption reports. The adopted exclusion criteria resulted in a sample that did not represent the female Brazilian population or the residents of São Paulo.

Graph 1:   Mean or median of fatty acids intake among overweight women by presence or absence of metabolic syndrome. 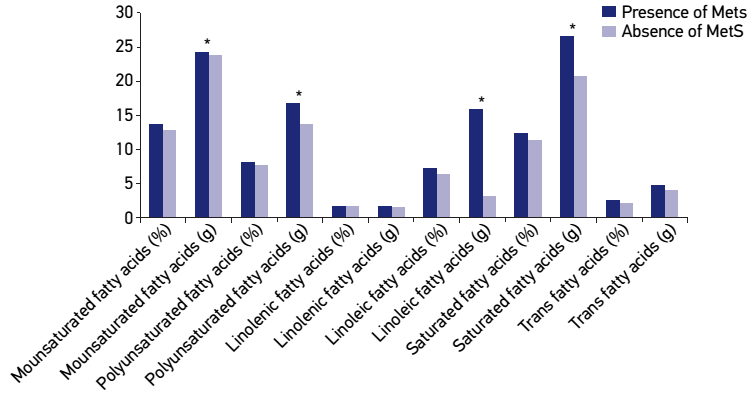 Graph 2:   Mean or median of fatty acids intake among obese women by presence or absence of metabolic syndrome. 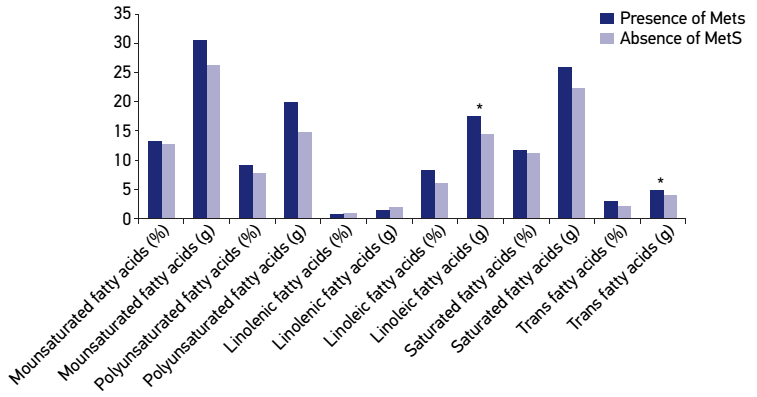 Table 1:   Body composition, biochemical profile and blood pressure of overweight and obese women by presence or absence of metabolic syndrome. 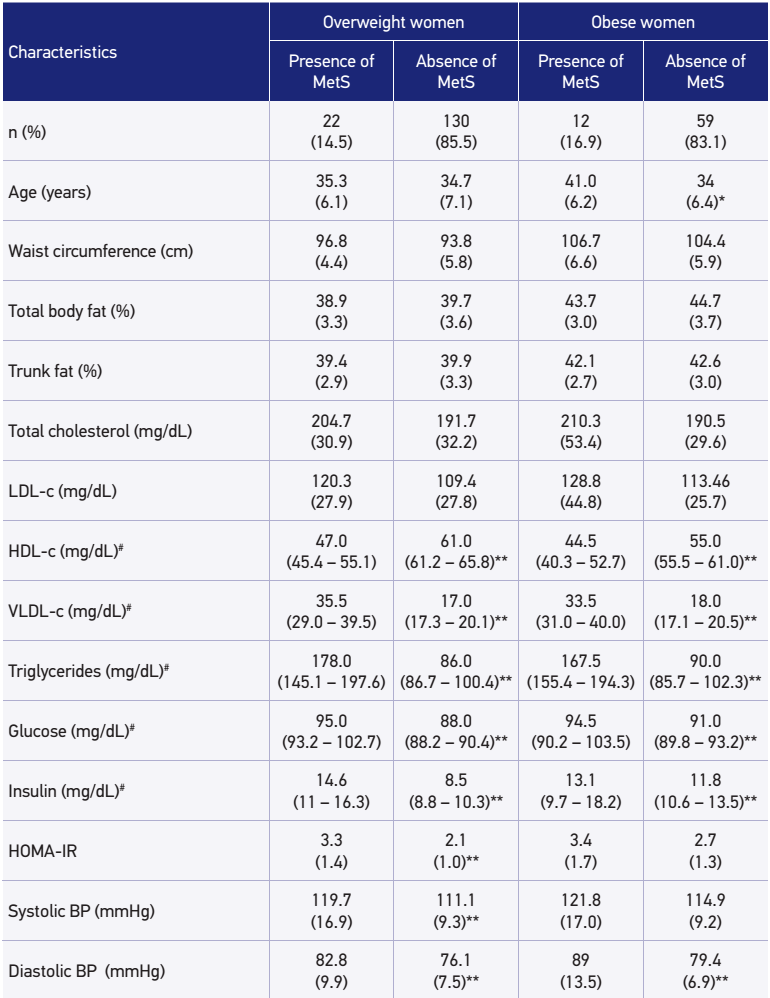 Table 2:   Dietary intake among overweight and obese women by presence or absence of metabolic syndrome. 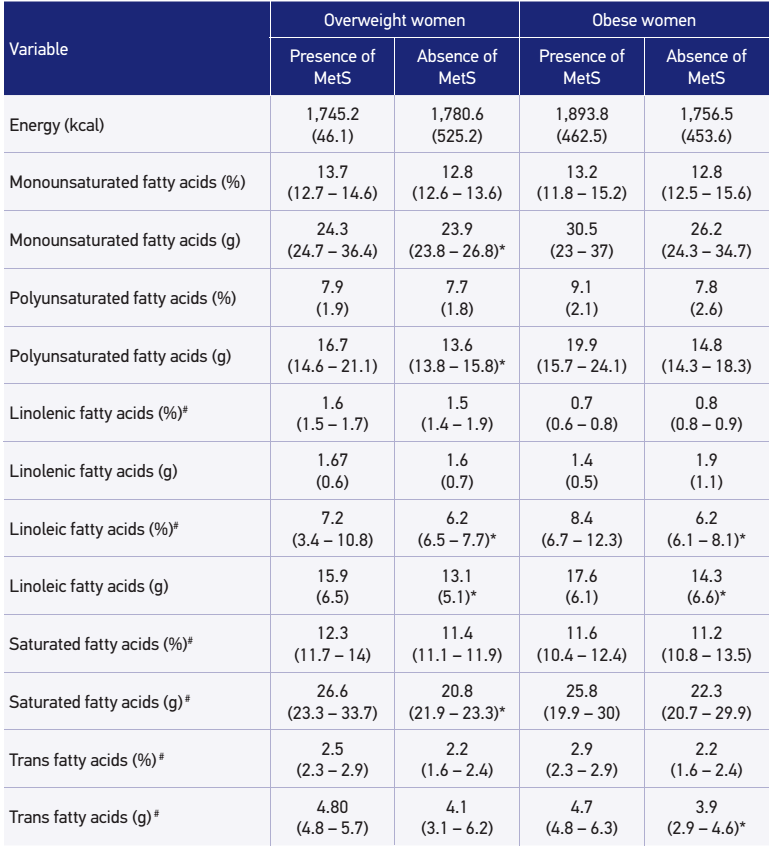 Table 3:   Occurrence of metabolic syndrome by quartiles of fatty acid intake adjusted for energy in the diet of overweight and obese women. 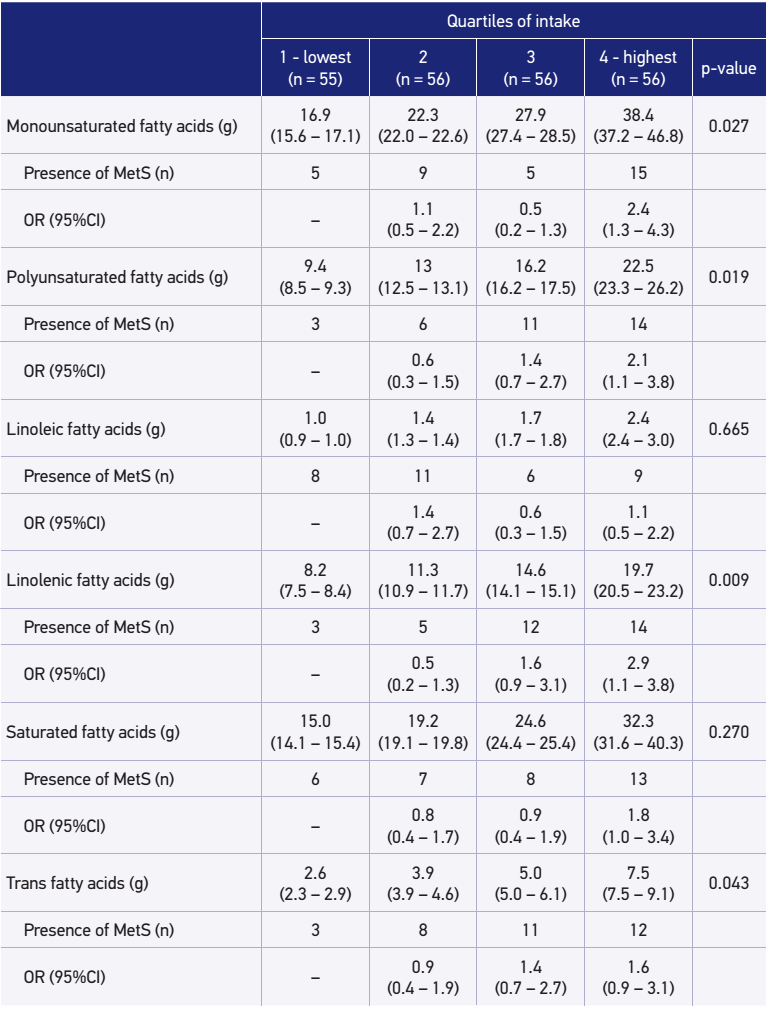