A total of 1,581 cervical samples obtained from Ecuadorian women undergoing cervical cancer screening were included in this study. HPV DNA was detected in 689 cervical samples (43.58%). Of these samples, 604 (38.20%) were positive for a single HPV genotype, while another 85 (5.37%) samples were positive for multiple HPV types. Genotype 16 (5.50%) resulted in the most frequently detected type in both single and multiple infections. HPV 33 (4.55%) and HPV 11 (3.80%) occupied the second and the third place in frequency among all detected genotypes.

Viral genotypes different from HPV 16 and HPV 18 are frequently detected among Ecuadorian women. The overall prevalence of HPV resulted higher than the one reported in other South American countries with a greater burden in the second and third decades of life.

Not many studies about the epidemiology of HPV infection have been published in Ecuadorian population. Publications by local groups about HPV burden suggest the presence of many HPV types different from types 16 and 18.

A second study performed in 2009 by Brown et al. in Santa Elena Province showed a disproportional prevalence of HPV in Ecuador. This last publication indicates HPV types 16, 52, 58 and 59 as the most prevalent among high risk types, and HPV 62, 71, 72 and 83 as the most frequent among low risk types77. Brown CR, Leon ML, Munoz K, Fagioni A, Amador LG, Frain B. Human papillomavirus infection and its association with cervical displasia in Ecuadorian women attending a private cancer screening clinic. Braz J Med Biol Res 2009; 42: 629-636..

As the presence of these last genotypes could be underestimated, it was the aim of the present study to estimate the prevalence of HPV 16, HPV 18 and other 35 high risk and low risk genotypes among Ecuadorian women attended as outpatient at SOLCA Hospital using Roche reverse line assay.

Cervical swabs obtained from 1,581 Ecuadorian women from different urban areas aged 20 to 70 years were included in this cross-sectional study. The samples were collected in PreservCyt(r) liquid media at SOLCA gynecological outpatient service from January 2008 until December 2013. All of the collected swabs were obtained from patients previously diagnose with cervical dysplasia and derived from other Institutions due to their lack of infrastructure to perform DNA analysis. All the samples were finally sent to SOLCA Molecular Biology laboratory.

DNA extraction was performed with AmpliLute Liquid Media Extraction Kit (Roche), according to manufacturer's instructions. Purity of DNA was measured by spectrophotometry.

HPV types were identified using Linear Array(r) HPV Genotyping test (Roche), allowing the characterization of 37 HPV genotypes, including 16, 18, 26, 31, 33, 35, 39, 45, 51, 52, 53, 56, 58, 59, 66, 67, 68, 69, 70, 73, 82, IS39, 6, 11, 40, 42, 54, 55, 61, 62, 64, 71, 72, 81, 83, 84 and CP61081212. Ashley Arney MT, Bennett KM. Molecular diagnostics of Human Papillomavirus. Lab Med 2010; 41(9): 523-30.. First, purified DNA was used for specific conventional PCR using PGMY09/PGMY11 set of primers and performed in 9700 Applied Biosystems(r)/GeneAmp(r) thermal cycler. After a chemical denaturation of PCR product, a process of hybridization with specific probes located at each reverse line strip was performed followed by consecutive washings to eliminate unspecifically bound molecules. To permit the detection of HPV hybridized DNA, a conjugate consisting of streptavidin alkaline phosphatase was added to biotinylated primers associated with PCR products. After addition of conjugate, new washes were performed previously to a final step consisting of the aggregation of substrate that generates a bluish band appearance due to color reaction in the presence of HPV corresponding genotype.

The quality and sufficiency of DNA was evaluated amplifying a human beta globin gene endogenous region complementary to two different probes located at the end of each reverse line strip. Both bands for beta globin gene detection were present at every included case result.

HPV test results were considered as positive or negative according to the presence of genotype specific bluish band at each reverse line strip. The overall and type-specific prevalence of HPV infection were estimated. Informed consent was not required as the data obtained came from routinely performed diagnostic procedures avoiding the inclusion of personal information. This study was exempt from an Ethic Committee approval due to the internal hospital policies.

Among multiple infections, HPV 16 was detected in 16 samples, while HPV 18 in four. No combination was detected including HPV 16 and HPV 18 at the same time.

Only a few studies on the burden of HPV genotypes prevalence have been conducted among Ecuadorian women, and we must remark that until now this work represents the biggest one.

Most of the samples collected by our Gynecology service came from Institutions different from ours with specific request of HPV genotyping analysis. This situation constitutes the biggest study limitation as the patients were derived as diagnosed with cervical dysplasia using CIE10 general code and without specifying the detected cytological abnormalities. This fact does not permit to classify cervical lesions for further correlation analysis. Despite of that, we have focused mainly in estimating the prevalence and distribution of HPV genotypes, classifying all the samples only as suspicious of viral infection.

Not very different results were obtained for HPV 16 if we compare our data to previous Latin American publications1616. Sepúlveda-Arias JC, Álvarez-Aldana A. Burden of Human Papillomavirus Infection in Latin America. Intech Open 2013; 360-380-17.. Differing from the previous mentioned studies performed among Ecuadorian women, the second most common genotype identified was HPV 33. In the case of low risk types, HPV 11 appeared to be more frequent than HPV 6.

Among the studied women, HPV infection resulted higher during the second and third decades of life, result that differs from previous published data and that could be explain by the fact that the samples included on this study were collected from daily routine analysis without more complex design or inclusion criteria.

All together the frequency of other high risk HPV genotypes resulted higher than HPV 16 and HPV 18. In the case of HPV 16, the obtained frequency was similar to reported in other regions. Differing from previous Ecuadorian studies, HPV 33 occupies the second place within all detected genotypes. HPV overall prevalence resulted higher than reported in other Latin American countries, including Peru and Brazil.

We acknowledge our technical personnel at Molecular Biology Department. 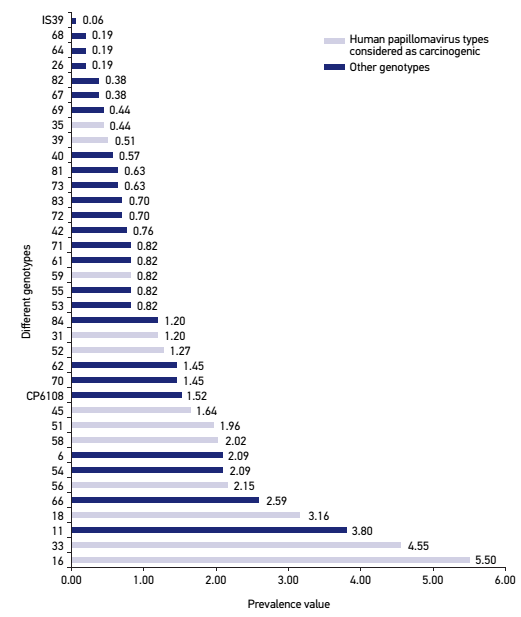