To analyze the spatial distribution of the four-year cancer mortality rates in the state of Mato Grosso, Brazil, from 2000 to 2015.

Ecological design study, in which mortality from neoplasia was analyzed, from 2000 to 2015, for the municipalities of Mato Grosso State. Mortality rates due to cancer were calculated by the ratio of the sum of deaths by cancer in each quadrennium, divided by the average of the population in the two central years of the period, multiplied by 10,000 inhabitants. Annual percentage change was calculated by the ratio of the linear regression coefficient to the cancer mortality rates in Mato Grosso State at the beginning of the analyzed period (2000 to 2003). Thematic maps were constructed for each quadrennium using intervals of equal classes.

Chronic noncommunicable diseases are responsible for most deaths worldwide. It is estimated that cancer is at the top of the basic causes of death and is the most important barrier to increasing life expectancy in the world11. World Health Organization. Global Health Observatory [Internet]. Geneva: World Health Organization; 2018 [accessed on Jul. 10, 2018]. Available at: who.int/gho/database/en/
who.int/gho/database/en/... .

Thus, the relevance of this study is unique, since the environment has characteristics that can act as risk factors for the occurrence of cancer. In addition, scientific production on the theme of cancer, using geoprocessing as an analysis tool, is still little explored, which further highlights the importance of this study, aiming to analyze the spatial distribution of the four-year rates of mortality from neoplasia, in the period from 2000 to 2015 in the state of Mato Grosso, Brazil.

Ecological design study, in which mortality from neoplasia (by municipality of residence) was analyzed, from 2000 to 2015, for the state of Mato Grosso.

The Brazilian Legal Amazon corresponds to the area of operation of the Superintendence of Development of the Amazon (SUDAM), being formed by the states of Rondônia, Acre, Amazonas, Roraima, Pará, Amapá, Tocantins, Mato Grosso, and the western part of Maranhão. It has an area of approximately 5,015,067.749 km2, corresponding to approximately 58.9% of the Brazilian territory88. Instituto Brasileiro de Geografia e Estatística. Portal [Internet]. Brazil: Instituto Brasileiro de Geografia e Estatística [accessed on Jul. 10, 2018]. Available at: http://www.ibge.gov.br
http://www.ibge.gov.br... .

Data on the estimated population of the state were acquired from the Brazilian Institute of Geography and Statistics (IBGE)88. Instituto Brasileiro de Geografia e Estatística. Portal [Internet]. Brazil: Instituto Brasileiro de Geografia e Estatística [accessed on Jul. 10, 2018]. Available at: http://www.ibge.gov.br
http://www.ibge.gov.br... for the year 2018 (3,441,998 inhabitants, with a population density of 3.36 inhabitants per km2 and a territorial area of 903,206,997 km2). The state of Mato Grosso is divided into 7 geographic regions and 141 municipalities (Figure 1).

Mortality rates due to cancer were calculated by the ratio of the sum of deaths by cancer in each quadrennium, divided by the average of the population in the two central years of the period, multiplied by 10,000 inhabitants. The rates were adjusted by the direct method by age groups, with intervals of four years, considering as a standard population the distribution of the world population1111. Doll R. Comparison between registries and age-standardized rates. In: Waterhouse JA, Muir CS, Correa P, Powell J, editors. Cancer incidence in five continents. Lyon: IARC; 1976. v. 3. p. 453-9.. In order to reduce instability in the analysis of mortality data by municipality, we sought to smooth out random fluctuations by grouping rates in four-year periods: 2000 to 2003; 2004 to 2007; 2008 to 2011; and 2012 to 2015.

An annual percentage change was calculated by the ratio of the linear regression coefficient to the cancer mortality rates in Mato Grosso State at the beginning of the analyzed period (2000 to 2003). Significance level of 5%.

To explore the spatial distribution of cancer mortality rates, thematic maps were constructed for each quadrennium using intervals of equal classes (0.00; between 0.01 and 12.52; between 12.53 and 23.67; between 23.68 and 36.21; between 36.22 and 48.00; above 48.00). The intervals were defined based on the distribution of rates in the first quadrennium (2000–2003). The geographical unit of analysis were the 141 municipalities of Mato Grosso. The municipalities of Itanhangá and Ipiranga do Norte were created in 2005, which made it impossible to calculate the mortality rate for the quadrennium from 2000 to 2003 and were declared as missing. The cartographic bases were obtained from IBGE1212. Instituto Brasileiro de Geografia e Estatística. Encontre mapas [Internet]. Brazil: Instituto Brasileiro de Geografia e Estatística [accessed on Jul. 10, 2018]. Available at: https://mapas.ibge.gov.br/bases-e-referencial/bases-cartograficas/malhas-digitais
https://mapas.ibge.gov.br/bases-e-refere... . Kernel maps were built with an adaptive radius. Nine strata were used, divided into equal intervals.

For data analysis, the software STATA version 12.0 and the ArcMap Program version 10.3 were used. The study was approved by the Ethics and Research Committee of Hospital Universitário Júlio Muller.

Figure 3 shows the four-year trends in cancer mortality rates according to municipality. There is an increase in the number of municipalities with rates greater than 23.67 deaths per 100,000 inhabitants in the period. The regions with the highest rate in the quadrenniums were West, Center-South, Southeast, Center-North, and North, while the Northeast and Northwest regions had the lowest rates.

The kernel intensity map (Figure 4) confirms that the highest density of cancer mortality occurred in the West, Center-South, Southeast, and Center-North regions of the state and the lowest in the Northeast and Northwest regions. This pattern tends to be maintained throughout the quadrenniums. For the North and Northwest regions there is a decrease in mortality densities over the four-year period. The Northeast region had the lowest densities in the entire period studied.

The results of this study identified space and time patterns that point to an increase in standardized rates of cancer mortality in the state of Mato Grosso from 2000 to 2015.

According to IBGE data on the age distribution of the population, at least 80% of the state's population is concentrated below 50 years of age. However, according to the Mato Grosso Oncology Care Action Plan, even though the state has a predominantly younger population, cancer has appeared as the second cause of death in mortality statistics (excluding external causes). In addition, there was also an increase in proportional cancer mortality, from 10.8% in 2001 to 14.3% in 20131313. Mato Grosso. Governo de Mato Grosso. Secretaria de Estado de Saúde (SES-MT). Plano de Ação da Atenção Oncológica no Estado de Mato Grosso 2017 a 2019 [Internet]. Cuiabá: SES-MT; 2017 [accessed on Jul. 10, 2018]. Available at: www.saude.mt.gov.br/arquivo/7317
www.saude.mt.gov.br/arquivo/7317... .

The five main causes of death from cancer in the period for the state, considering the anatomical location, were lung, prostate, stomach, breast, and liver. With the exception of liver cancer, which appears only in Mato Grosso, the others are also among the five main types of cancer that kill the most in Brazil, although not in the same order1515. Brasil. Ministério da Saúde. Instituto Nacional de Câncer. Coordenação de Prevenção e Vigilância. Divisão de Vigilância e Análise de Situação. Sistema de Informação sobre Mortalidade [Internet]. Brasil: Ministério da Saúde; 2019 [accessed on Jul. 20, 2019]. Available at: https://www.inca.gov.br/numeros-de-cancer
https://www.inca.gov.br/numeros-de-cance... .

Estimates from Global Cancer Observatory show that, worldwide, lung cancer remains the leading cause of cancer mortality, with 1.8 million deaths predicted in 2018, representing about 1 out of 5 cancer deaths. Prostate cancer is considered the fifth leading cause of cancer death in men, and breast cancer the first in women, accounting for about 1 out of 4 cancer cases in this group. Stomach cancer remains an important cancer worldwide, accounting for about 783,000 deaths, equivalent to 1 out of 12 deaths from cancer, while liver cancer is considered the fourth leading cause of cancer death worldwide33. Bray F, Ferlay J, Soerjomataram I, Siegel RL, Torre LA, Jemal A. Global cancer statistics 2018: GLOBOCAN estimates of incidence and mortality worldwide for 36 cancers in 185 countries. CA Cancer J Clin 2018; 68(6): 394-424. https://doi.org/10.3322/caac.21492
https://doi.org/10.3322/caac.21492... .

The profile of deaths presented in the state has been associated with more urbanized, industrialized regions with an aging population, in line with developed countries in the West. On the other hand, the state continues to live with deaths due to types of cancer associated with infections, such as stomach cancer, which have a high potential for prevention and tend to be more prevalent in countries of low and medium development1616. Balakrishnan M, George R, Sharma A, Graham DY. Changing trends in stomach cancer throughout the world. Curr Gastroenterol Rep 2017; 19: 36. https://doi.org/10.1007/s11894-017-0575-8
https://doi.org/10.1007/s11894-017-0575-... .

Cancer is a multifactorial disease, however, according to the World Health Organization (WHO), some risk factors are related to most deaths from chronic noncommunicable diseases, including cancer, having an important contribution to the burden of diseases. Among these factors, smoking, excessive alcohol consumption, inadequate diet, and physical inactivity stand out1717. World Health Organization (WHO). Global status report on noncommunicable diseases 2010. Geneva: WHO; 2011..

Spatial analysis of cancer mortality, through the use of maps, is an important tool to evaluate health risks, especially when this type of analysis considers environmental aspects, as the visualization of information allows a better understanding of how relationships occur, contributing to the identification of priority territories, as well as a better understanding of the health-disease process and health planning actions2020. Carvalho MS, Souza-Santos R. Análise de dados espaciais em saúde pública: métodos, problemas, perspectivas. Cad Saúde Pública 2005; 21(2): 361-78. https://doi.org/10.1590/S0102-311X2005000200003
https://doi.org/10.1590/S0102-311X200500... .

Specifically with regard to primary health care services, they serve as a gateway to the health care network. The low availability of these services may impair the identification, in the initial phase, of the first lesions suggestive of cancer and, consequently, determine the specialized services as the predominant places for the diagnosis of the disease, since the confirmation of the lesions requires procedures and supplies available only in medium and high complexity services2525. Aquino RCA, Lima MLLT, Silva VL, Alencar FL, Rodrigues M. Acesso e itinerário terapêutico aos serviços de saúde nos casos de óbitos por câncer de boca. Rev CEFAC 2018; 20(5): 595-603. https://doi.org/10.1590/1982-0216201820515017
https://doi.org/10.1590/1982-02162018205... .

Currently, Mato Grosso is the state that produces the most soy, corn, cotton, and cattle in Brazil, having become, for several years, a strategic territory for the expansion of agribusiness2626. Instituto Brasileiro de Geografia e Estatística (IBGE). Produção Agrícola Municipal 2015 [Internet]. Brasília: IBGE; 2015 [accessed on Jul. 20, 2019]. Available at: https://sidra.ibge.gov.br/pesquisa/pam/tabelas
https://sidra.ibge.gov.br/pesquisa/pam/t... , whose model consists predominantly of large monoculture properties, intensive use of chemical and pesticide fertilizers to control unwanted species and use of biotechnology (transgenics)2727. Albergoni L, Pelaez V. Da Revolução Verde à agrobiotecnologia: ruptura ou continuidade de paradigmas? Rev Economia 2007; 33(1): 31-5. https://doi.org/10.5380/re.v33i1.8546
https://doi.org/10.5380/re.v33i1.8546... . This issue was evidenced by the higher cancer mortality rates in cities close to BR-163 (a federal highway) (Figure 3), which can probably be explained by the relationship between soy production (with transgenics and use of pesticides, which have highly carcinogenic potentials) and the presence of the highway to transport production to other countries2828. Brasil. Ministério da Infraestrutura. Departamento Nacional de Infraestrutura de Transportes. Portal [Internet]. Brazil: Ministério da Infraestrutura [accessed on Apr. 20, 2020]. Available at: http://www.dnit.gov.br/noticias/governo-federal-conclui-asfaltamento-da-br-163-pa
http://www.dnit.gov.br/noticias/governo-... .

The state has some municipalities that concentrate a large part of the national agricultural production, such as some municipalities located in the central and southeast regions. Consequently, due to the chemical-dependent production method, these municipalities have high rates of pesticide consumption2929. Beserra L. Agrotóxicos, vulnerabilidade socioambientais e saúde: uma avaliação participativa em municípios da bacia do rio Juruena, Mato Grosso [dissertation]. Cuiabá: UFMT; 2017..

In 2015, the United Nations (UN) adopted a set of 17 goals as part of a sustainable development agenda. One of the goals is related to the reduction of premature mortality due to noncommunicable diseases through prevention and treatment. It has therefore become a global priority to monitor trends in mortality from these diseases, provided by quality information systems, in order to verify whether national and global commitments are being achieved3939. United Nations (UN). Economic and Social Council [Internet]. New York: United Nations; 2019 [accessed on Jan. 28, 2020]. Available at: https://undocs.org/E/2019/68. Accessed 28 Jan 2020.
https://undocs.org/E/2019/68... .

Thus, the description of cancer mortality can bring important contributions to epidemiological studies based on the person-space-time triad. Studies of this magnitude are necessary, especially in Mato Grosso, since studies on this topic are scarce, and knowing this reality can potentially contribute to the identification of priority regions for intervention aiming to reduce mortality rates.

To the Institute of Collective Health of Universidade Federal de Mato Grosso, for the opportunity to work and learn.

All the contents of this journal, except where otherwise noted, is licensed under a Creative Commons Attribution License 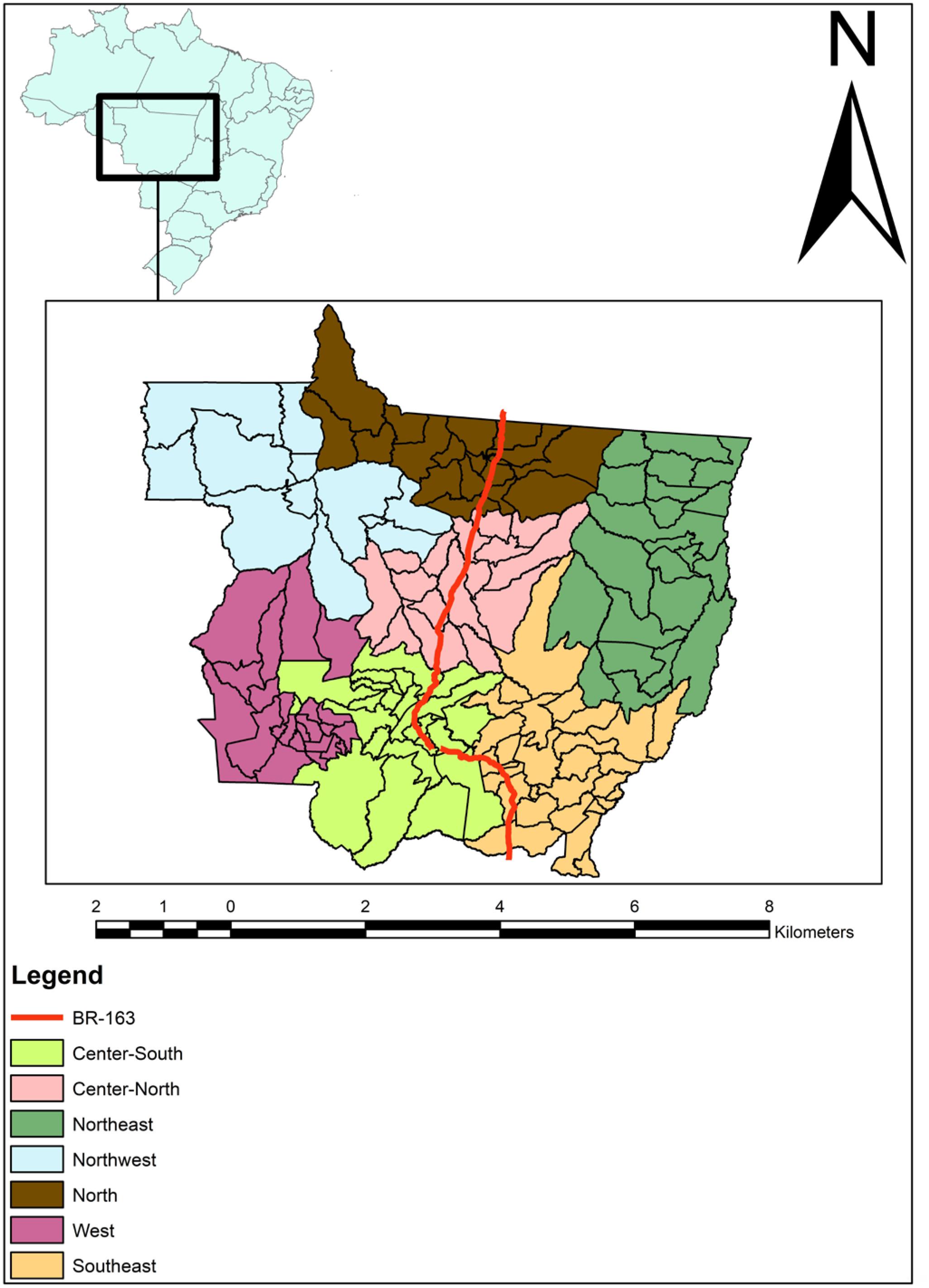 Figure 2   Proportions of cancer mortality rates in the municipalities of Mato Grosso State (2000–2015). 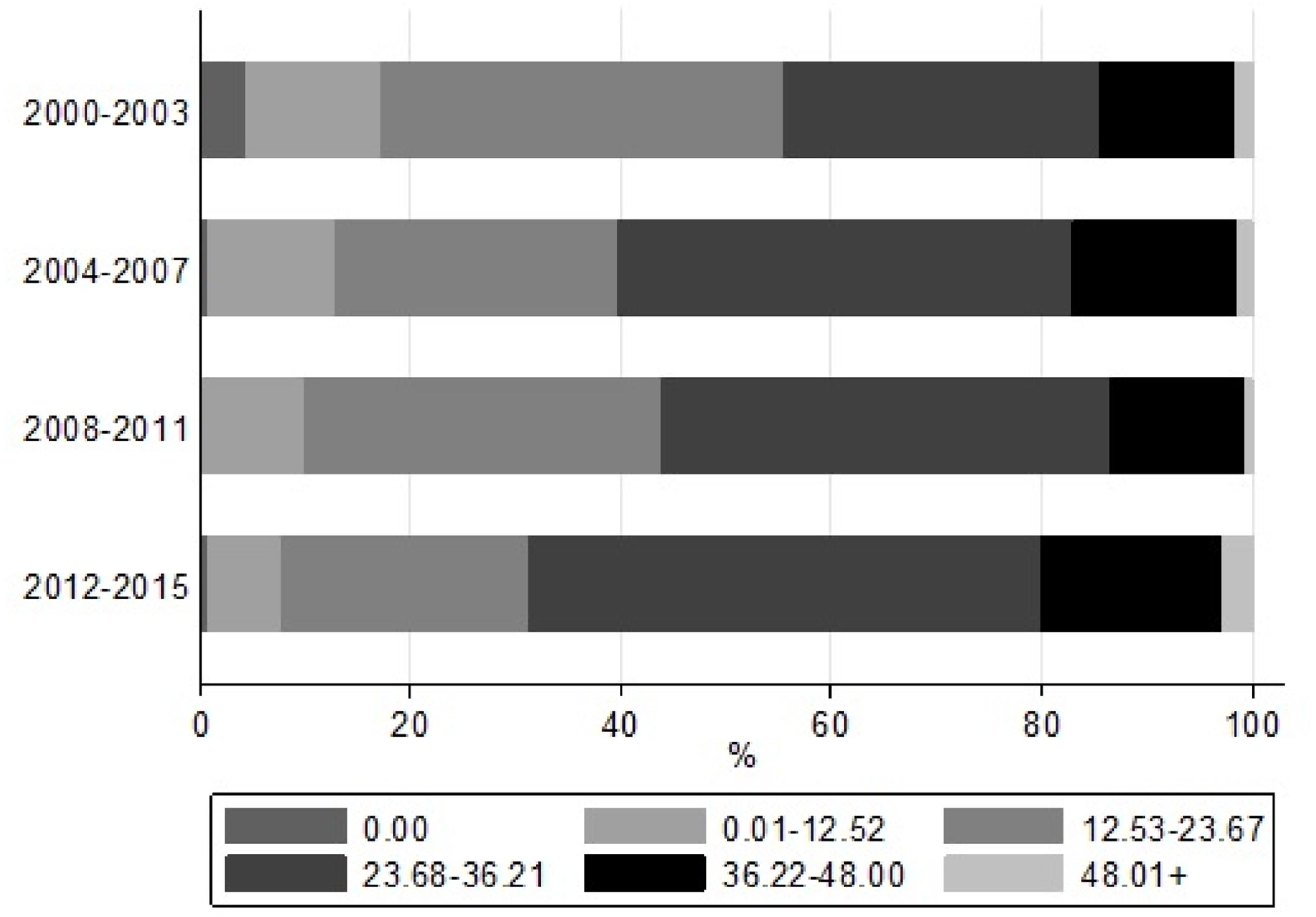 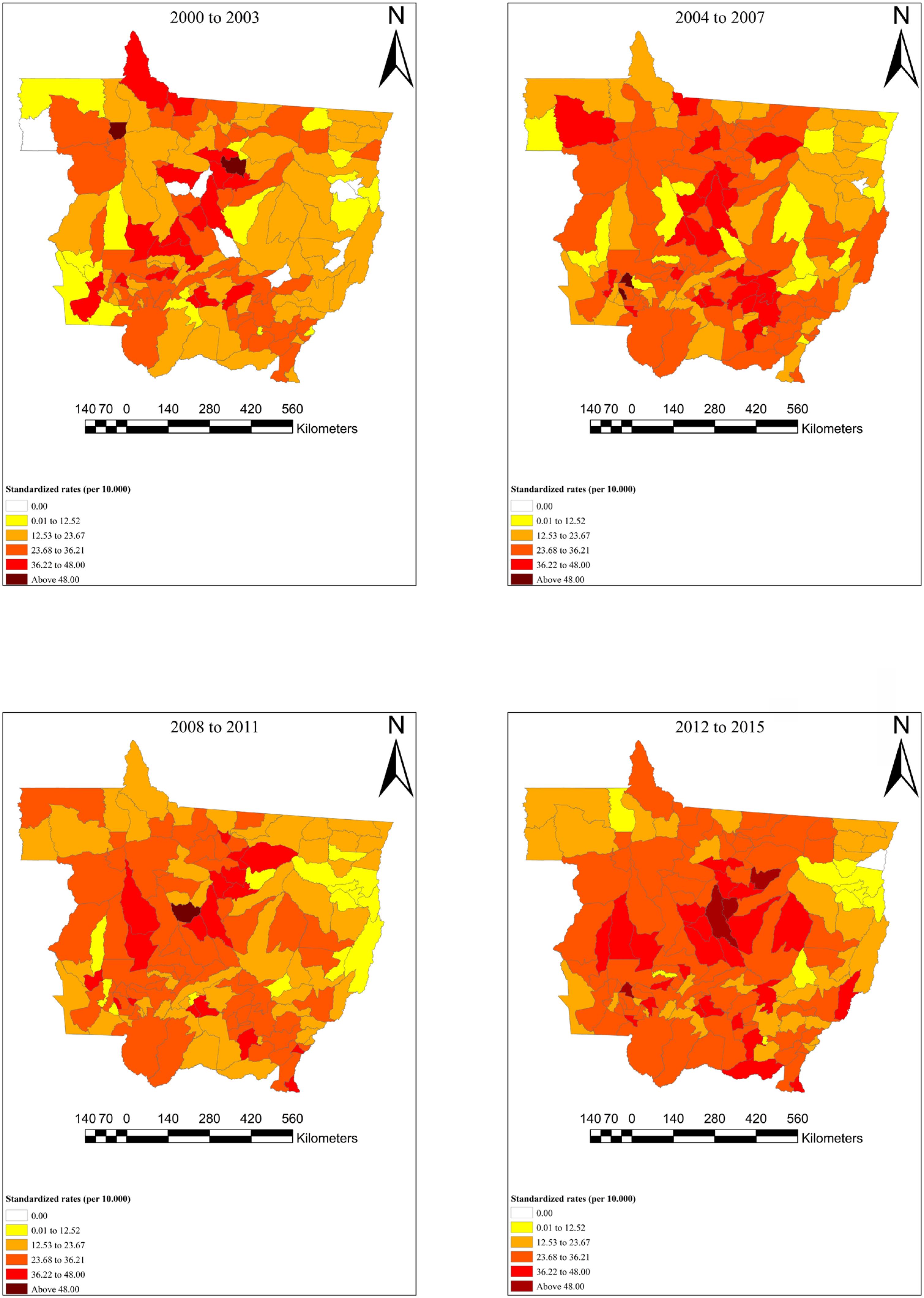 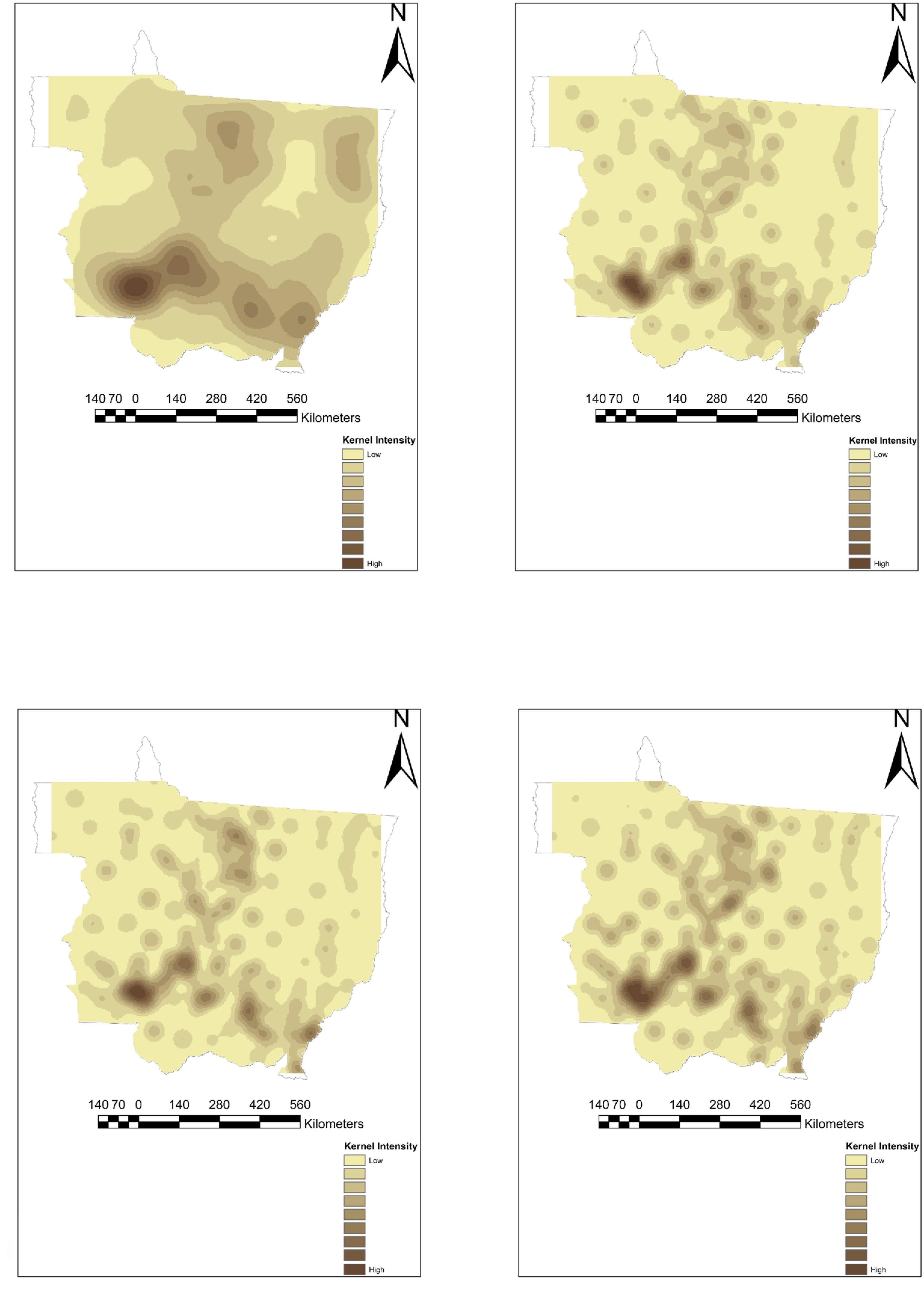