Epidemiological surveillance of tuberculosis in Brazil: How can more progress be made?

In the year that the Report published by the World Health Organization (WHO) reveals that tuberculosis (TB) is the most fatal infectious disease in the planet, overcoming aids for the first time, it is necessary to re-think TB prevention and control strategies. Estimative shows that this disease killed 1.5 million people in 2014, against 1.2 million victims of the HIV.11. World Health Organization (WHO). Global tuberculosis report 2015 [Internet]. 20 th ed.Geneva: World Health Organization; 2015 [cited 2015 nov 14]. Available from:Available from:http://apps.who.int/iris/bitstream/10665/191102/1/9789241565059_eng.pdf?ua=1 .
http://apps.who.int/iris/bitstream/10665...

Diagnosing and treating correctly the cases of pulmonary tuberculosis are essential measures to control the disease. There have been many efforts in order to have an early diagnosis of the disease so the patient can start adequate treatment, in a way that the bacillus transmission is interrupted. In Brazil, the actions of the National Program for Tuberculosis Control (PNCT) are essential for the reduction of TB morbidity and mortality. PNCT has succeeded greatly, but, although there has been a reduction of 38.4% in the incidence and 35.8% in mortality, from 1990 to 2010, Brazil is still among the 22 countries with the highest burden of this disease.22. Ministério da Saúde (BR). Secretaria de Vigilância em Saúde. Departamento de Vigilância Epidemiológica. Manual de Recomendações para o controle da tuberculose no Brasil [Internet]. Brasília: Ministério da Saúde; 2011 [citado 2015 nov 14]. (Série A. Normas e Manuais Técnicos). Disponível em: Disponível em: http://www.cve.saude.sp.gov.br/htm/TB/mat_tec/manuais/MS11_Manual_Recom.pdf
http://www.cve.saude.sp.gov.br/htm/TB/ma...

However, the household transmission, although making epidemiological sense, seems to little contribute as an infection and disease source in the number of notified cases. In a study conducted in Bahia State for active search of household members living with a TB patient, only 1.1% of the individuals had the disease.33. Mota FF, Vieira-da-Silva LM, Paim JS, Costa MCN. Spatial distribution of tuberculosis mortality in Salvador, Bahia, Brazil. Cad Saude Publica. 2003 jul-ago; 19(4): 915-22. In the Latin America, the only study conducted about it, showed that, in Peru, the household transmission was relevant until the age group of 5 years old, and, above that age, transmission occurred in the community, not within the household.44. Madico G, Gilman RH, Checkley W, Cabrera L, Kohlstadt I, Kacena K, et al. Community infection ratio as an indicator for tuberculosis control. Lancet. 1995 Feb; 345(8947): 416-9. Classen et al. (1999)55. Classen CN, Warren R, Richardson M, Hauman JH, Gie RP, Ellis JH, et al. Impact of social interactions in the community on the transmission of tuberculosis in a high incidence area. Thorax. 1999 Feb;54(2): 136-40. suggested that, in areas with high TB incidence, out of household contacts have an important role in the transmission of the disease.

Moreover, the traditional search for household contacts is not able to identify if the transmission occurred through quick and casual contacts among the idividuals.66. Fok A, Numata Y, Schulzer M, FitzGerald MJ. Risk factors for clustering of tuberculosis cases: a systematic review of population-based molecular epidemiology studies. Int J Tuberc Lung Dis. 2008 May;12(5):480-92. A study using molecular biology techniques, conducted by Sebek (2000)77. Sebek M. DNA fingerprinting and contact investigation. Int J Tuberc Lung Dis. 2000 Feb;4(2)Suppl 1:S45-8. showed that the transmission occurs, for most of the cases, from the contact of the infected individual with other individuals during a very short period of time and, thus, is hard to be identified through the traditional investigation. Small et al. (1994),88. Small PM, Hopewell PC, Singh SP, Paz A, Parsonnet J, Ruston DC, et al. The epidemiology of tuberculosis in San Francisco: a population-based study using conventional and molecular methods. N Engl J Med. 1994 Jun;330(24): 1703-9. in a study conducted in San Francisco, USA, reported that the search for household contacts was responsible for identifying only 10% of the notified cases.

Studies conducted in Espírito Santo State, Brazil, to analyze the transmission dynamics of the Mycobacterium tuberculosis, from genotypic and territorial data, has shown - in accordance to other studies - that TB transmission in urban areas present an important space determination. In these studies, we use the definition of territory, or space, as defined by Milton Santos99. Santos M. A natureza do espaço: técnica e tempo, razão e emoção. São Paulo: Hucitec; 1996. (1996), an interdependent locus of production mode and socioeconomic formation, and not only geographic space.

In this sense, in a study conducted in Vitória-ES, the researchers observed that TB was heterogeneously distributed in that town, and the highest incidences were found in the neighborhoods with the worst urban quality index (IQU).1010. Vieira RCA, Prado TN, Siqueira MG, Dietze R, Maciel ELN. Distribuição espacial dos casos novos de tuberculose em Vitória, Estado do Espírito Santo, no período entre 2000 e 2005. Rev Soc Bras Med Trop. 2008; 41(1):82-6. Another study, also conducted in Espírito Santo State, for territorial analysis on childhood tuberculosis, verified that most of the municipalities with high incidence are priorities for TB control, which reinforces the relation between the territorial agglomerations of endemic TB among individuals aged more than 15 years old and the childhood TB, besides showing that these places are important in the transmission chain, because they are places of recent infection of the disease, not of endogenous reactivation.1111. Sales CMM, Figueiredo TAM, Zandonade E, Maciel ELN. Análise espacial da tuberculose infantil do estado do Espírito Santo, 2000 a 2007. Rev Soc Bras Med Trop. 2010 jul-ago;43(4):435-9.

Besides, Maciel et al. (2010)1212. Maciel EL, Pan W, Dietze R, Peres RL, Vinhas SA, Ribeiro FK, et al. Spatial patterns of pulmonary tuberculosis incidence and their relationship to socio-economic status in Vitoria, Brazil. Int J Tuberc Lung Dis. 2010 Nov;14(11): 1395-402. showed that TB cases not only tend to form territorial agglomerations, as previously described, but also that some Mycobacterium tuberculosis genotypes may be responsible for forming these agglomerations, suggesting outbreaks of one genotype in micro-regions. So, these territorial and genotypic agglomerations of TB cases could represent the social relations in a neighborhood.

In a more specific analysis of the distances between Mycobacterium tuberculosis genotypes, Ribeiro et al. observed that an average distance of approximately 2,000 meters separates patients of the same territorial agglomeration, that is, a patient x with the disease and with a specific genotype is approximately 2,000 meters away of patient y, who has the same genotype. This finding suggests that, although TB transmission does not usually happen within the household, it happens in a wider area, but still space-limited.1313. Ribeiro FK, Pan W, Bertolde A, Vinhas SA, Peres RL, Riley L, et al. Genotypic and spatial analysis of Mycobacterium tuberculosis transmission in a high-incidence urban setting. Clin Infect Dis. 2015 Sep; 61(5):758-66.

How is it possible to incorporate these results in the epidemiological surveillance? These findings have the potential of improving the current strategies for searching individuals with respiratory symptoms, because the focus of the place of search changes. What is currently seen, or recommended, is that household evaluation gets wider as it expands to social spaces. Surveillance based on territory would have as main objective, in primary health care, to build the social networks of the individual with TB, and, from that, to establish the control strategies.

The individuals' and their families' networks can be determined by using a family evaluation tool used in the Family Health Strategy (FHS) - the ecomap. According the Ministry of Health (2011b),1414. Ministério da Saúde (BR). Guia prático de matriciamento em saúde mental [Internet]. Dulce Helena Chiaverini, organizadora. Brasília: Ministério da Saúde, Universidade do Estado do Rio de Janeiro; 2011 [citado 2015 nov 9]. Disponível em: Disponível em: http://bvsms.saude.gov.br/bvs/publicacoes/guia_pratico_matriciamento_saudemental.pdf
http://bvsms.saude.gov.br/bvs/publicacoe... the ecomap is a tool that, together with the gene-chart or the family-chart, represents, through graphics, the relations of the family with the social environment.

According to the aforementioned studies and, mainly, to the findings of Ribeiro et al. (2015),1313. Ribeiro FK, Pan W, Bertolde A, Vinhas SA, Peres RL, Riley L, et al. Genotypic and spatial analysis of Mycobacterium tuberculosis transmission in a high-incidence urban setting. Clin Infect Dis. 2015 Sep; 61(5):758-66. we propose a flowchart of territorial surveillance for TB, with the search for individuals with respiratory symptoms, using the ecomap technique to identify their social relations. In the flowchart suggested on Figure 1, two strategies can be highlighted. The first, with an individual approach, in which each contact is identified and referred to clinical investigation; and the second, with a collective strategy, of education in health, in which people will be taught about signs and symptoms and a health care guidance will be provided, in order to identify the need for clinical evaluation. In the beginning of Figure 1, the patient with TB starts the strategy of contacts' control, based on the search of individuals with respiratory symptoms in different social environments, such as, the household, the workplace, churches and schools, shelters, or places of continuous or regular leisure activities, among others. In case the patient lives alone or does not have a permanent workplace or leisure activities with the same people, there is no person to investigate. On the other hand, if the individual lives with other people, or has permanent workplace, each contact must be individually investigated. If the cough lasts for more than two weeks, the orientation is to collect the sputum at the moment of the identification and another sample the following day.22. Ministério da Saúde (BR). Secretaria de Vigilância em Saúde. Departamento de Vigilância Epidemiológica. Manual de Recomendações para o controle da tuberculose no Brasil [Internet]. Brasília: Ministério da Saúde; 2011 [citado 2015 nov 14]. (Série A. Normas e Manuais Técnicos). Disponível em: Disponível em: http://www.cve.saude.sp.gov.br/htm/TB/mat_tec/manuais/MS11_Manual_Recom.pdf
http://www.cve.saude.sp.gov.br/htm/TB/ma... For contacts in schools and churches, or other agglomeration places, the advice is to conduct health education activities in order to prevent the disease and alert individuals for its symptoms, and that care should be taken in case someone presents cough for more than two weeks.

This flowchart for the search of individuals with respiratory symptoms of TB may guide, in the practice of primary health care, the work process and organize the demand of the health services; thus, a higher number of individuals with respiratory symptoms may have the disease diagnosed and, consequently, the early beginning of the treatment, or treatment for latent infection, if designated. Besides, in case of environments with many people, health education will have as consequence a higher number of informed people, who can spread the information. This way, these actions may present an improvement for TB surveillance actions, with benefits for the affected individuals and the community. Once this approach takes into consideration the transmission in the community and its social spaces, not only within the household, its application may contribute to organize and improve the work processes in the primary health care for TB control 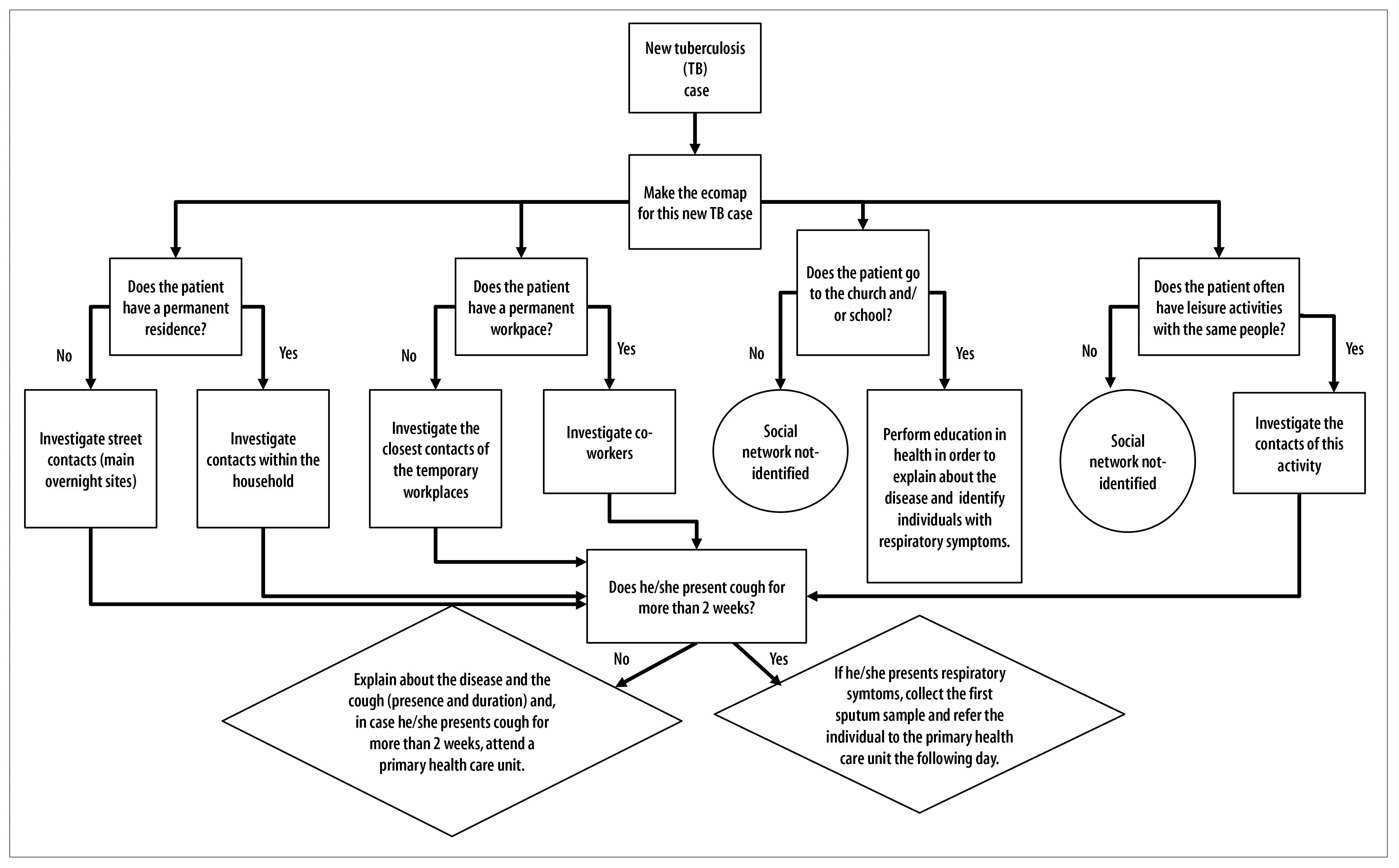