to describe the occurrence of the recording of mental disorders (MD) in primary health care (PHC) services in Brazilian municipalities and to analyze associated factors.

an ecological study was conducted using PHC Information System secondary data for the year 2014; the magnitude of the occurrence of MD recording was assessed through indicators developed for this purpose; bivariate analysis was used.

recording of MD in PHC is incipient, unequally distributed and possibly dependent on local initiatives.

The Community Health Worker Program (CHWP) and the Family Health Strategy (FHS) were implemented in a great part of the country in order to expand primary health care to segments of the population which had no access to these services.11. Fortes S, Menezes A, Athié K, Chazan LF, Rocha H, Thiesen J et al. Psiquiatria no século XXI: transformações a partir da integração com a Atenção Primária pelo matriciamento. Physis. 2014 out-dez;24(4):1079-102. Community health workers (CHW), who work in both programs, among other activities, visit households, where they collect information on the living conditions and health of the families. Considering the tool used by the CHW, according to the information reported by the families, 11 diseases or health conditions were recorded, and one of them was mental disorders (MD). These data, complemented by other findings from professionals of the family health team, subsidize the Primary Health Care Information System (SIAB), which was designed to be a local, regional and national management tool.33. Carreno I, Moreschi C, Marina B, Hendges DJB, Rempel C, Oliveira MMC. Análise da utilização das informações do Sistema de Informação de Atenção Básica (SIAB): uma revisão integrativa. Cienc Saude Coletiva. 2015 mar;20(3):947-56.

The awareness of the affected population is a key element for a programmatic development of health actions focused on specific diseases and diseases of interest - and responsibility - of the Primary Health Care. This study aimed to (i) describe the magnitude of the occurrence of the recording of mental disorders (MD) in Primary Health Care (PHC) services in Brazilian municipalities and (ii) to analyze associated factors to MD.

An ecological study was carried out and its main source of data was SIAB. Based on this system, information was obtained regarding the number of people registered in the Primary Health Care (PHC), the coverage extent of PHC and the MD records in the registered population.

In addition, the National Register of Health Service Providers (CNES) was used to access information on the existence of CAPS in different municipalities; and data from the Brazilian Institute of Geography and Statistics (IBGE) was used in order to estimate the municipalities' population in 2014.

Three indicators specially designed for this purpose were adopted to assess the magnitude of the occurrence of MD recording in Primary Health Care, including the use of absolute numbers and percentage of records. The first indicator was the Population Ratio of MD Records (RPDM - acronym in Portuguese): its numerator was the number of MD cases registered in the Primary Health Care, and its denominator was the population registered in the Primary Health Care; this indicator was presented in records per 100 thousand inhabitants. The other two indicators were the MD Recording Capacity (CRDM - acronym in Portuguese) and the MD-Case Estimate not Registered (ENRDM - acronym in Portuguese). The calculation of these indicators was based on the following estimate of the Brazilian Ministry of Health: 3% of the population is supposed to have severe and persistent mental illness (SPMI).44. Saúde mental em dados. Brasília: Ministério da Saúde, Secretaria de Atenção à Saúde. Vol. 2, No. 4, ago 2007. The MD Recording Capacity corresponds to the percentage of cases of MD registered out of the total of estimated cases of SPMI. While the MD-Case Estimate not Registered is the difference between the estimated cases of SPMI and mental disorders cases registered.

In order to perform bivariate analysis, the outcome was the 'DM record'. The explanatory variables analyzed were (i) to be located in Southeast or Southern macro-regions (regions with better social and health indicators), (ii) to be a state capital city, (iii) to have more than 200,000 inhabitants, (iv) to provide coverage by the Primary Health Care greater than 75% and (v) to have CAPS.

In the bivariate analysis, Fisher's exact test was used to assess differences between the relative proportions. The statistical significance was 5%.

As this was an ecological study using secondary data, and the units of analysis were not individuals but municipalities and states, this research was dispensed from examination by the Research Ethics Committee.

Thumbnail
Table 3
- Records of mental disorders in people over 15 years of age (n = 15,216) according to national macro-regions and states. Brazil, 2014

The results of this study suggest that the connection between Mental Health and public programs of Primary Health Care is weak, because less than 1% of the municipalities included in the study presented mental disorders records.

Moreover, in the subgroup of municipalities with MD cases recorded an over-representation of municipalities located in the richest macro-regions (South and Southeast), with greater infrastructure (capitals and municipalities with more than 200,000 inhabitants) and more utilization capacity in the field of Mental Health (presence of CAPS) was highlighted. However, literature indicates that settings that are poorer and with less utilization capacity present greater connection between the Primary Health Care and the Mental Health.22. Mackenzie J. Global mental health from a policy perspective: a context analysis: characterising mental health and recommending engagement strategies for the Mental Health Innovation Network. London: Overseas Development Institute; 2014.

The analysis of the magnitude of the occurrence of MD recording demonstrated significant weakness in the capacity of identifying cases: slightly more than 0.5% of expected cases were recorded, producing a low RPDM and an estimate of more than 2.5 million people without MD records. In addition, an underreporting of such magnitude showed significant variations between the country macro-regions: in those with the worst social indicators, such as the Northern region, there was no case record, and in the Southeast and South, which showed the best indicators, this magnitude was higher.

The low magnitude of MD records in Primary Health Care should not be attributed solely to a widespread deficiency of SIAB. For example, there is evidence of a better record on the system to other diseases, such as diabetes mellitus.55. Dias JCR, Campos JADB. Diabetes mellitus: razão de prevalências nas diferentes regiões geográficas no Brasil, 2002 2007. Cienc Saude Coletiva. 2012 jan;17(1):239-44.

The literature on self-reported morbidity due to chronic diseases indicates that certain factors capable of influencing access to health services can also impact diseases of self-awareness.66. Theme Filha MM, Szwarcwald CL, Souza Júnior PRB. Medidas de morbidade referida e inter-relações com dimensões de saúde. Rev Saude Publica. 2008 fev;42(1):73-81. In the particular case of mental disorders, it is known that social stigmas related to this condition make the case identification based on self-reporting more difficult.22. Mackenzie J. Global mental health from a policy perspective: a context analysis: characterising mental health and recommending engagement strategies for the Mental Health Innovation Network. London: Overseas Development Institute; 2014. Such features could help explaining, partially, the observed variations in the magnitude of records between the Brazilian macro-regions; but these features would still be insufficient to justify why 14 states did not present any records of MD, and why more than 80% of all records occurred in four states. It is reasonable to assume that circumscribed policies and initiatives at local level could influence MD recording within certain contexts, to the detriment of others. Concerning possible initiatives in terms of influence, the implementation of matrix support strategies on mental health teams working in Primary Health Care stands out.

A potential limitation of the present study is the use of estimates of severe and persistent mental illness - SPMI - as a reference for the analysis of MD records magnitude in SIAB. There is a myriad of other psychiatric conditions which are not included in this subgroup of disorders, such as the common mental disorders, which are much more prevalent in the Primary Health Care.77. Gonçalves DA, Mari JJ, Bower P, Gask L, Dowrick C, Tófoli LF et al. Brazilian multicentre study of common mental disorders in primary care: rates and related social and demographic factors. Cad Saude Publica. 2014 Mar;30(3):623-32. Furthermore, one of the recognized difficulties associated with the investigation of self-reported morbidity is the categorization of the perception of disease by lay interviewers and interviewees in biomedical diagnostics.88. Ross DA, Vaughan JP. Health interview surveys in developing countries: a methodological interview with recommendations for future surveys. London: London School of Hygiene and Tropical Medicine; 1984. In any case, SPMI tends to approach more than what would popularly be considered MD, given its very visible dysfunctionality. The eventual use of broader parameters would only increase this already obvious limitation in identifying cases of MD by the Primary Health Care.

The data presented indicate that the MD recording in the population registered in the Community Health Worker Program - CHWP - and in the Family Health Strategy - FHS - here taken as an estimate to assess the coordination between the Mental Health and Primary Health Care in Brazil is still incipient, unequally distributed and possibly dependent on local initiatives for their enforcement. 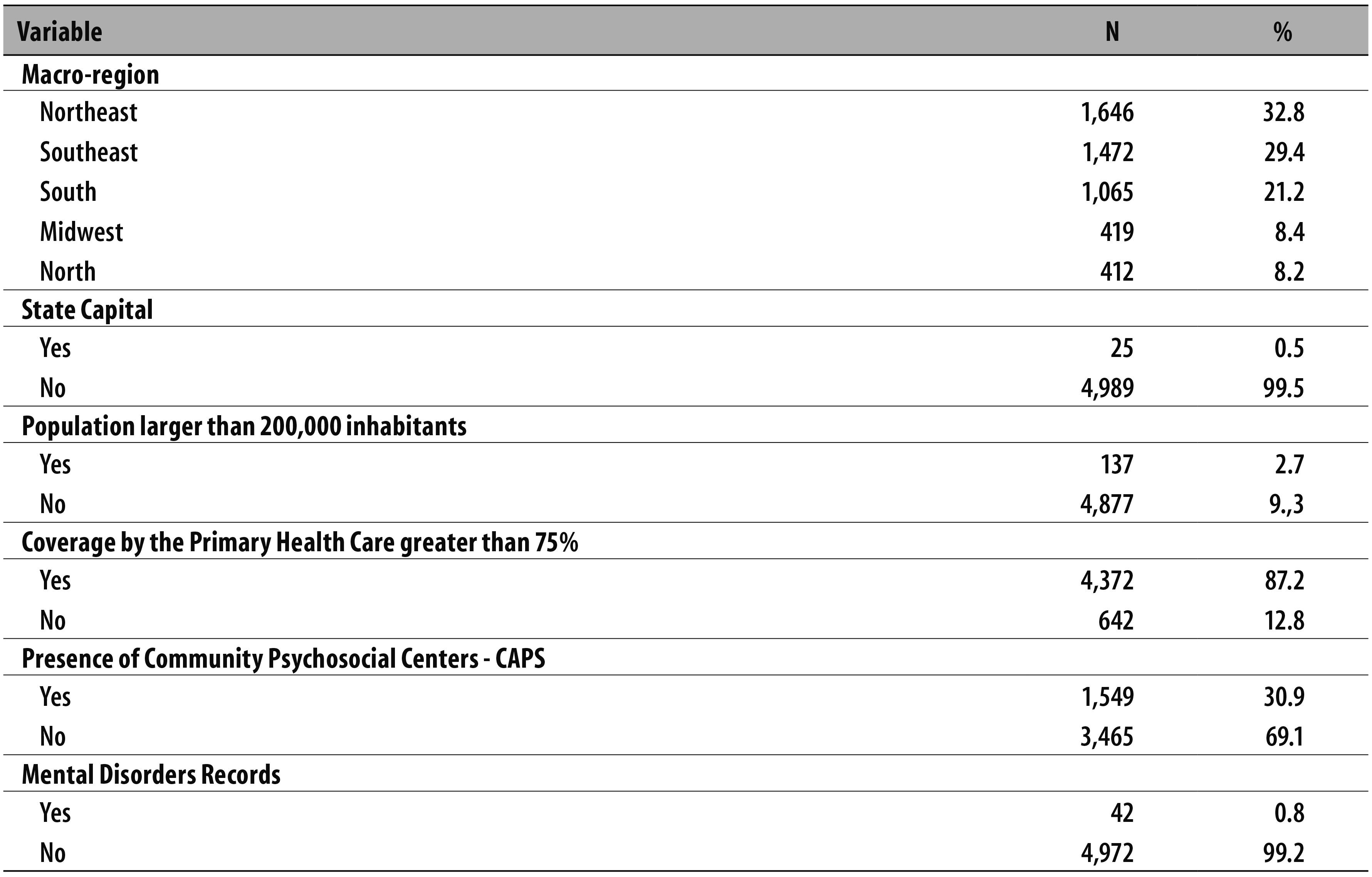 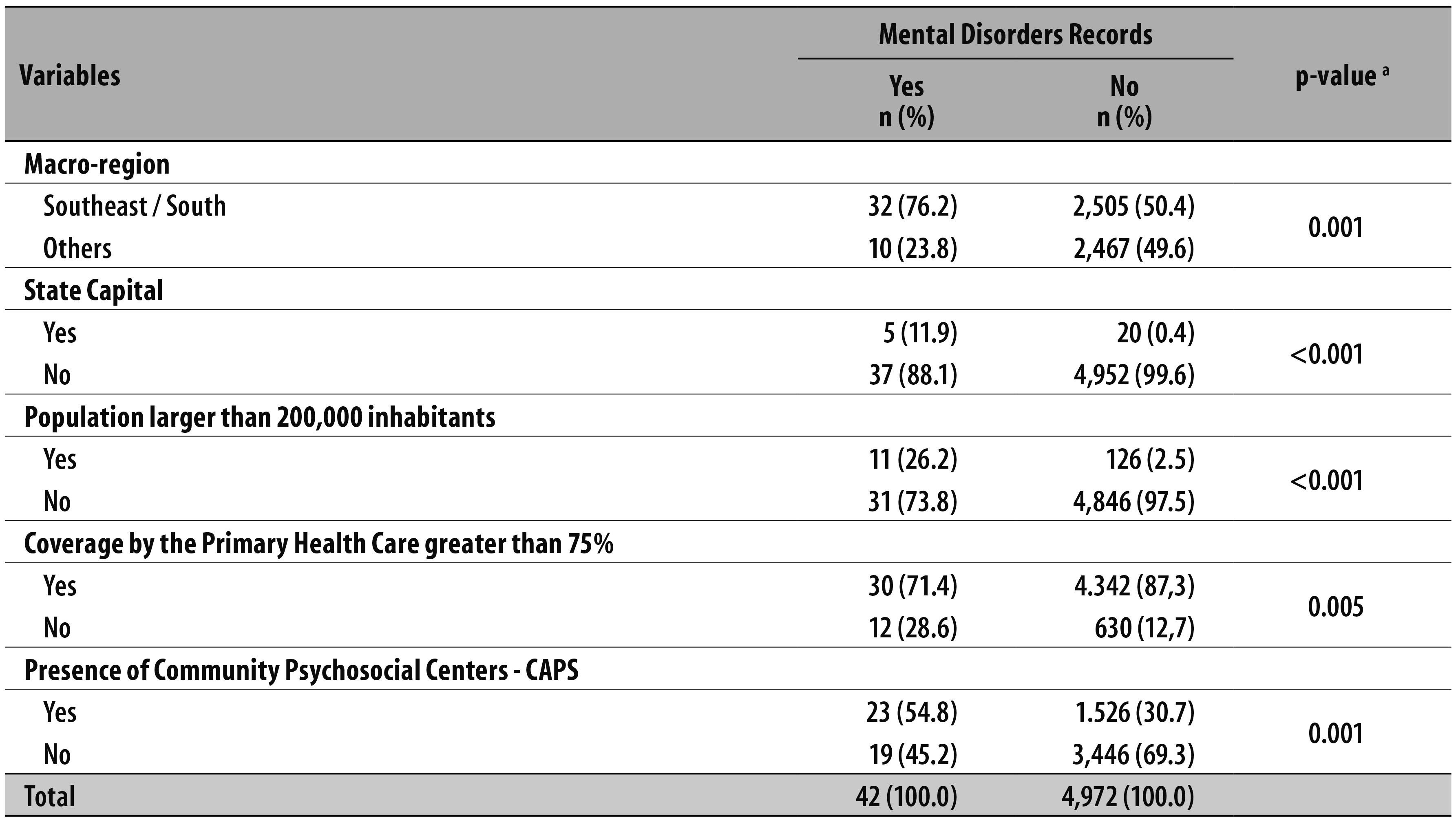 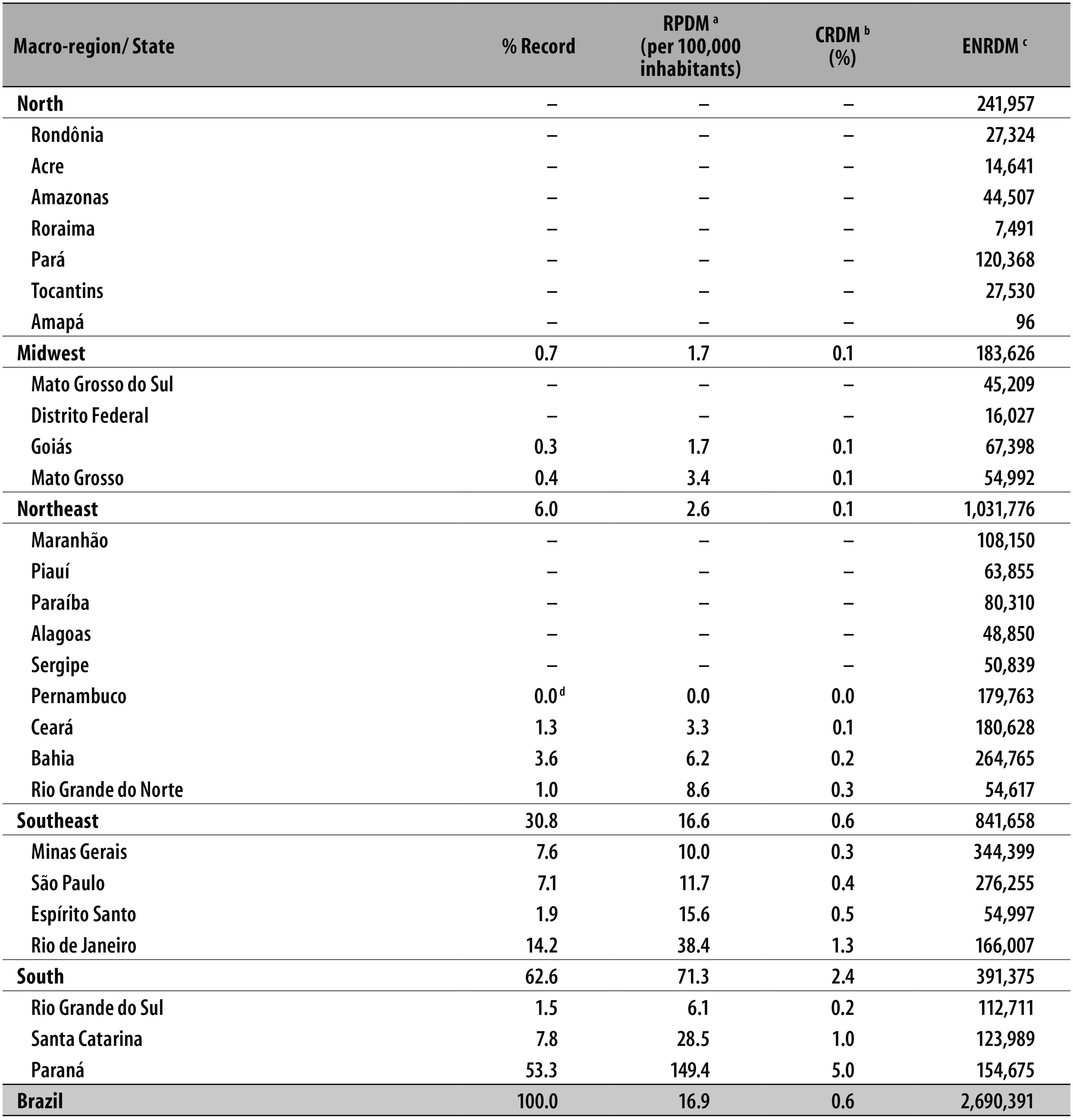