to analyze factors associated with the need for dental treatment in adults due to dental caries and tooth loss.

this was a cross-sectional study with a random sample of adults attending Fluminense Federal University School of Dentistry outpatient clinics, in Niterói, RJ, between July and December 2013; we used data collected from clinical records; a questionnaire was administered in interviews; logistic regression analysis was performed to obtain crude and adjusted odds ratios (OR).

prevalence of need for treatment in adults was high, especially in women and people with lower family income.

The objective of this study was to analyze prevalence and factors associated with the need for dental treatment for tooth decay and tooth loss in adults attending Fluminense Federal University School of Dentistry graduate clinics (FOUFF), in the period from July to December 2013.

A cross-sectional study was conducted with the purpose of analyzing the need for treatment for dental caries and tooth loss in the reference population, corresponding to approximately 3,000 adult patients aged 18 years old or over registered with ten FOUFF undergraduate course clinics, between July and December 2013. The clinics involved in the study were: Dentistry, Occlusion, Integrated Clinical Practice, Total Prosthesis, Oral Diagnosis, Removable Prosthesis, Endodontics, Periodontics, Fixed Prosthesis and Surgery.

Treatment needed for reconstitution using prostheses was classified as:

Eligible patients were those who registered of their own accord and were attending FOUFF clinics, aged 18 or over, from July to December 2013. To be treated at one of these clinics, SUS users must register by phone or e-mail addressed to the FOUFF Secretaries’ office, attend a welcome lecture and undergo diagnostic screening, and join the waiting list to be seen. Individuals who registered during the first half of 2013 and those still in treatment were selected by simple random sampling of dental records, using a table of numbers taken randomly from the list of patients registered as at 30 June 2013.

The data were collected from the dental records already used in clinics and through interviews with the patients themselves, carried out between July and December 2013. All dental records were standardized and the information generated was the responsibility of the dental professional who treated the patients. This information was validated by the university teacher in charge of the sector. The dental records contained data on patients’ age, sex, address, dental elements examined, diagnosis and respective treatment. The questionnaire was based on the form used by the Brazilian Ministry of Health in a national oral health survey.1212. Ministério da Saúde (BR). Secretaria de Atenção à Saúde. Secretaria de Vigilância em Saúde. SB Brasil 2010: pesquisa nacional de saúde bucal, resultados principais [Internet]. Brasília: Ministério da Saúde; 2012 [citado 2018 out 29]. 116 p. Disponível em: Disponível em: http://bvsms.saude.gov.br/bvs/publicacoes/pesquisa_nacional_saude_bucal.pdf
http://bvsms.saude.gov.br/bvs/publicacoe...

A pilot study was conducted to test the data collection instrument with a sample of 20 individuals who were not included in the main study, although data collection during the field work itself was done by the same interviewer used in the pilot study. The purpose of the pilot study was to verify the applicability of the questionnaire: to test whether interviewees understood the questions and to assess average time spent on answering it.

The Epi Info Statcalc application was used to calculate the sample size.1313. Centers for Disease Control and Prevention. Division of Health Informatics & Surveillance (DHIS). Epi InfoTM | CDC [Internet]. 2016 [cited 2018 Oct 29]. Available in: Available in: https://www.cdc.gov/epiinfo/index.html
https://www.cdc.gov/epiinfo/index.html... The exposure hypotheses used were that individuals with 'lower family income' were considered to be exposed, while individuals with 'higher family income' were considered to be non-exposed. The proportion of non-exposed cases (9.1) and exposed cases (24.5) was established using the values found in a similar study carried out at the same institution.1414. Gonçalves R. Socioeconomic profile of patients attended in the clinics of the specialization courses of the odontology faculty of the federal fluminense university - fouff. Int J Sci Dent. 2012;1(37). The sample size calculated for each group was 104, based on a 5% significance level and test power of 80%. We therefore planned to examine 208 individuals plus a further 10.

The data were analyzed using the Statistic Package for Social Science (SPSS for Windows, version 21.0). Associations between the independent variables and the dichotomic 'need for treatment' outcome were verified using the chi-square test. The independent variables were clustered according to a three-level hierarchical model1515. Dahlgren G, Whitehead M. European strategies for tackling social inequities in health: levelling up Part 2 [Internet]. Copenhagen: World Health Organization; 2007 [cited 2018 Oct 29]. 137 p. Available in: Available in: http://www.euro.who.int/__data/assets/pdf_file/0018/103824/E89384.pdf
http://www.euro.who.int/__data/assets/pd... and were analyzed sequentially, starting with the most distal layer (contextual factors) and ending with the proximal layer (service access/use and demographic factors), according to the determinants involved on each level (Figure 1). For each stage of the hierarchical structure, logistic regression analysis was performed using a backward stepwise procedure, selecting the best predictors with a significance level of p<0.25 in the bivariate analysis. When defining the final model, the variables with greater statistical significance on each horizontal level were added in ascending order. Thus, the bivariate analysis variables were included on their hierarchical level in the multivariate models. Only 'income' and 'sex ' were significant in their respective blocks, whereby the covariate adjusted odds ratios (OR) were obtained taking the hierarchical levels (individual and contextual) into consideration. Second-order iterations were tested at each stage of the analysis. The significance level established in the analysis of the final model was 5%.

Thumbnail
Figure 1
- Theoretical structure used in the selection of the predictor variables presented in the study (p<0.25)

The study project was approved by the FOUFF Research Ethics Committee: Report No. 146803/2012. The participants signed a Free and Informed Consent form before answering the questionnaire.

Table 1 shows the distribution of individual and contextual characteristics according to prevalence of need for dental treatment. 43.3% of males had some need for treatment, while this percentage was 61.2% (p=0.02) among females. In the analysis of the remaining independent variables, no significant differences were found in the comparison of the groups.

In the multivariate analysis, the 'household density', 'number of appliances ', 'healthcare plan', 'reason for appointment' and 'education level' variables were removed because they had a significance level of p ≥ 0.25. Among the contextual and access to services variables, only 'family income' showed significant association (p<0.05) when model 1 was adjusted (Table 2). Following adjustment of the final multivariate logistic regression model, the 'family income' and 'sex' variables were included since the p-value was <0.05. The level 2 variables were not included as their p-value was >0.05. The need for dental treatment was lower (OR=0.53 95%CI 0.28;0.98) in individuals with higher family income and higher among women (OR=2.28 95%CI 1.21;4.32). None of the groups showed statistical significance (Table 2).

The main limitations of this study lie in the power of the sample. The sample size calculation was based on the proportion of individuals exposed and not exposed to health inequalities and not on the prevalence of the dependent variable: the need for dental treatment. Post hoc analysis of test power, based on the prevalence found in our study, found power of less than 65%, with minimum OR equal to 2.2, and OR to be detected with a power of 80%, based on the proportion found in a similar study which was equal to 3.2. Despite having a random sampling process, the sample studied does not allow extrapolation to other population groups, because it reflects only those who had access to FOUFF outpatient clinics. Over half of the sample analyzed (56.1%) needed treatment for dental caries or tooth loss; however, this prevalence reflects people who sought treatment on their own initiative and who had greater access, given that making an appointment depended upon prior registration. In Brazil, 44% of the population had consulted a dentist in the last 12 months, according to the 2013 National Health Survey.1616. Instituto Brasileiro de Geografia e Estatística. Pesquisa nacional de saúde, 2013: acesso e utilização dos serviços de saúde, acidentes e violências: Brasil, grandes regiões e unidades da Federação [Internet]. Rio de Janeiro: Fundação Instituto Brasileiro de Geografia e Estatística; 2015 [citado 2018 out 29]. 100 p. Disponível em: Disponível em: https://biblioteca.ibge.gov.br/visualizacao/livros/liv94074.pdf
https://biblioteca.ibge.gov.br/visualiza... This increased demand for treatment in our study sample also influenced dental caries prevalence greater than 70% in the adults in our study, while in Brazil as a whole this prevalence is much lower among adults (9.5%) and the elderly (13.9%) Another limitation refers to the cross-sectional study design, which does not allow the identification of causal inferences, as well as possible information and memory biases on the part of patients interviewed.

Prevalence of tooth loss, as assessed by the need for some type of prosthesis, was lower than that found for Brazil as a whole in the most recent oral health survey, according to which the need for some type of prosthesis in adults aged 35 to 44 years occurred in 68.8% of cases.1212. Ministério da Saúde (BR). Secretaria de Atenção à Saúde. Secretaria de Vigilância em Saúde. SB Brasil 2010: pesquisa nacional de saúde bucal, resultados principais [Internet]. Brasília: Ministério da Saúde; 2012 [citado 2018 out 29]. 116 p. Disponível em: Disponível em: http://bvsms.saude.gov.br/bvs/publicacoes/pesquisa_nacional_saude_bucal.pdf
http://bvsms.saude.gov.br/bvs/publicacoe... A possible explanation for the lower prevalence of tooth loss is related to the characteristics of the sample, restricted to people who already have access to a specialized public clinic, with a large part of the interviewees only seeking restorative treatment.

Worldwide, lower dental caries prevalence is found among people with higher purchasing power, compared to those with low income. In Brazil, the worst oral health conditions are related to poverty and a lower level of income.1818. Silva JV, Machado FCA, Ferreira MAF. Social inequalities and the oral health in Brazilian capitals. Ciênc Saúde Coletiva. 2015 Aug;20(8):2539-48. doi: 10.1590/1413-81232015208.12052014.
https://doi.org/10.1590/1413-81232015208... In this study, the majority of the sample was comprised of low-income people in need of restorative treatment, which may also have influenced the higher prevalence and associations found.

The importance of controlling and reducing inequalities in relation to the occurrence of dental caries and its treatment is based on the ethical imperative of avoiding these inequalities becoming health inequities, as they are avoidable, unfair and unnecessary.2424. Whitehead M. A typology of actions to tackle social inequalities in health. J Epidemiol Community Health. 2007 Jun;61(6):473-8. doi: 10.1136/jech.2005.037242.
https://doi.org/10.1136/jech.2005.037242...

The need for dental treatment due to caries and tooth loss in patients attending Fluminense Federal University School of Dentistry outpatient clinics was high, especially in women and individuals with lower family income.

Novaes LCM was responsible for developing the study, reviewing the literature, data collection and analyses and writing the article. Alves Filho P participated in the data analysis and drafting and revising the manuscript.Corvinus MPF and Novaes TA participated in the data analysis, as well as in writing the manuscript. All the authors have approved the final version and declared themselves to be responsible for all aspects of the study, ensuring its accuracy and integrity.

Figure 1   - Theoretical structure used in the selection of the predictor variables presented in the study (p<0.25) 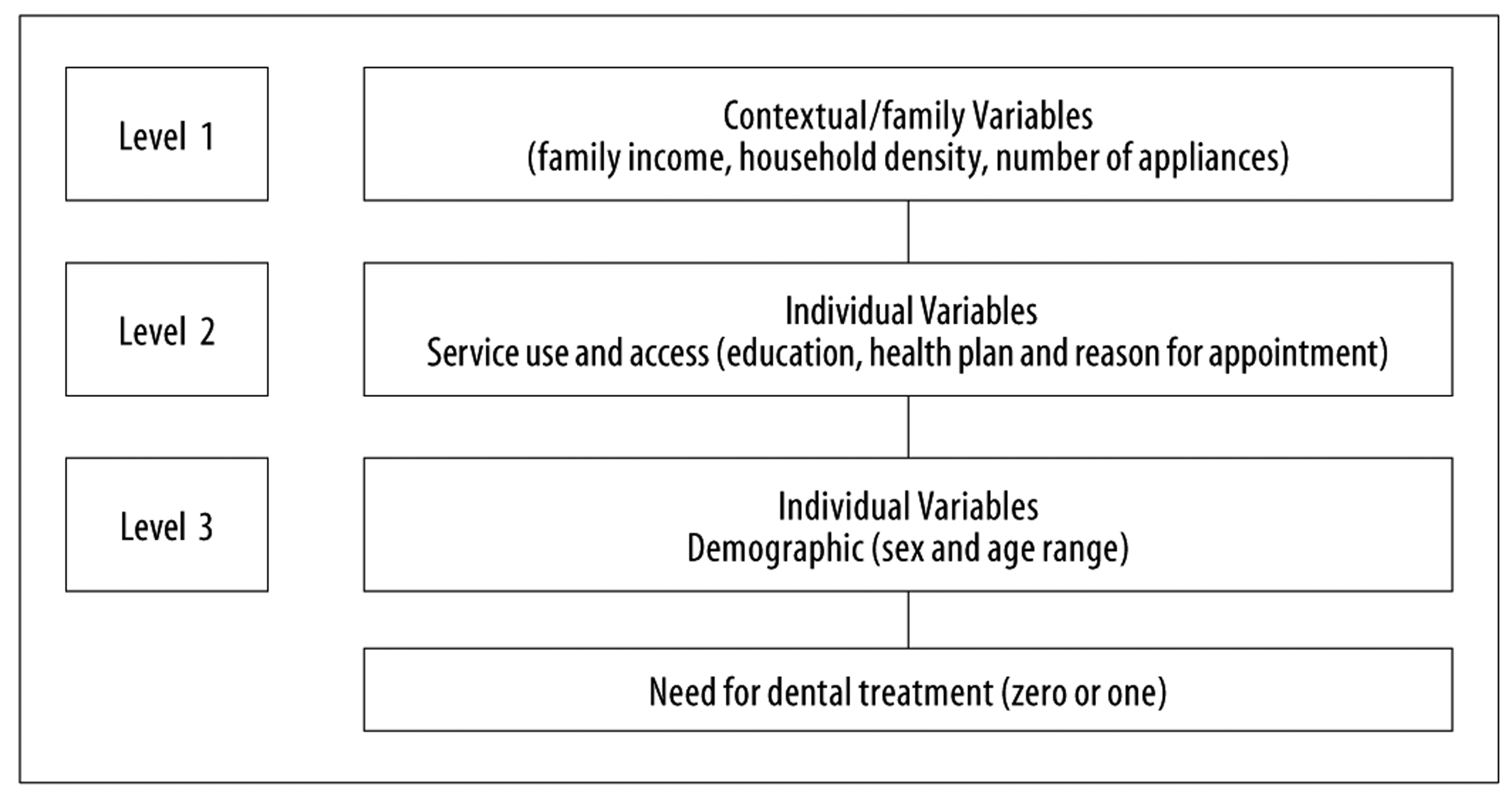