Physical wastage of immunobiological products in the state of Ceará, Brazil, 2014-2016

to describe discarded wasted immunobiological products provided by the National Im-munization Program (PNI) to the State of Ceará between 2014 and 2016, and the costs of discarded doses.

this was a descriptive study using data from suspect im-munobiological product evaluation forms and data from disposal approval forms.

we identified a large number of discarded wasted doses, with high absolute cost; tighter control is necessary, as failures in conservation dynamics may interfere with the supply of immunobiologicals.

The objective of this study was to describe physical wastage of immunobiologicals provided by the National Immunization Program (PNI) to the State of Ceará between 2014 and 2016, and the costs of unused doses.

A descriptive study was conducted based on secondary data documented on forms used to evaluate suspect immunobiological products exposed to inadequate temperature, as well as data from physical wastage disposal approval forms, for the period from January 2014 to December 2016 in Ceará state. The evaluation forms, together with the technical disposal or reuse approval forms, were retrieved from the state’s cold chain database.

In this study physical wastage was considered to be that arising from inadequate storage, packaging and conservation, handling and transport problems, such as broken or cracked vials, expired immunobiologicals, temperature deviation due to equipment failure and labeling problems.

Suspect immunobiological product evaluation forms are filled in by health professionals responsible for municipal vaccine rooms at the time of occurrence and are forwarded to the respective Regional Health Coordination Service (CRES) within the state. The CRES, in turn, send the printed forms to the state’s cold chain management body which is responsible for providing a technical report approving disposal or reuse, taking into consideration (i) data on the last temperature reading before and after the occurrence, (ii) length of time during which immunobiologicals were exposed to temperature alteration from the beginning until the end of the occurrence, (iii) maximum, minimum and momentary temperatures recorded during the exposure period, and vaccine conservation practices adopted, and (iv) written records of the products, demonstrating whether or not they had suffered previous temperature alterations. Data was collected from the evaluation forms in April and May 2017.

Data analysis was performed by means of a descriptive statistical study, showing the types of immunobiologicals wasted, the amount of wasted doses in absolute numbers, and the percentage of the main factors that led to the occurrence of physical wastage.

Taking the supply notes for products provided to the Ceará cold chain by the Ministry of Health, via the Strategic Supplies Information System (SIES), we calculated the cost, at current prices, of all vaccines, sera and immunoglobulins provide to Ceará state per annum in the period selected. The calculation was performed taking into consideration price adjustments during the period as updated on each supply note issued by the Ministry. Based on these price adjustments, we calculated the cost of physical wastage of vaccines each year, compared to the total cost of the vaccines.V

The study assessed 317 forms from the 22 CRES and their respective municipalities. Two hundred and fifty seven (72.0%) of the forms had corresponding disposal approval forms issued following cold chain management analysis and evaluation; the remainder had been authorized for reuse.

Table 1 shows the description of physical immunobiological wastage during the study period and the cost (in BRL) of wasted doses. In 2014-2016, 160,767 doses of vaccines, sera and immunoglobulin forming part of the products provided by PNI/Ministry of Health to the state of Ceará were wasted, at a total cost of BRL 1,834,604.75. Physical wastage recorded on the disposal approval forms accounted for 0.45%, 0.93% and 0.53% of the total cost of vaccines in 2014, 2015 and 2016, respectively.

The mean reason for physical waste was electric power shortage (54.9%), followed by the main power switch being turned off (10.6%), equipment-related problems (9.2%), refrigerator being unplugged (7.7%), refrigerator door left open (6.3%) and forgetting to put vaccines in the refrigerator (4.7%), among others (Figure 1).

This study revealed that in a three-year period (2014-2016) in the state of Ceará, more than 160,000 doses of vaccine were discarded as physical wastage, corresponding to a cost of almost BRL 2 million. Percentage wastage accounted for under 1% of PNI’s annual investment in immunobiologicals in Ceará in the same period.

In financial terms, wastage cost least in 2014, totaling BRL 359,867.02. 2014 was also the year in which the lowest number of wasted doses and occurrences were recorded, in comparison with each of the two following years. In particular, 2015 was the year in which the greatest number of doses was wasted and at the highest cost, totaling BRL 869,586.91 - or 47.4% of the entire cost of wastage for the three-year period studied. Notwithstanding, in the same year there were only 77 occurrences of discarded products, i.e. an amount lower than expected, when compared to the wastage/cost ratio found in 2014 and 2016. The high financial amount generated by this wastage can therefore be explained by the greater quantity of suspect immunobiologicals included on the same form, as well as by the variations in the prices of these products which occur every year when the supply contracts between the Ministry of Health and the manufacturing laboratories are renewed.

In this study, electric power shortage was the main reason for wastage of stored vaccines. The highest proportion of physical wastage in the state of Santa Catarina and Amazonas was also caused by electric power shortage, i.e. 35.7% and 41.2% respectively. On the other hand, in the states of Mato Grosso do Sul (38.6%) and Rio Grande do Norte (40.4%), the highest proportion of identified wastage was caused by recording errors and therefore did not correspond to physical wastage.88. Samad S. Perdas de vacinas: razões e prevalência em quatro unidades federadas do Brasil. Dissertação [Mestrado]. São Paulo (SP): Universidade Federal de São Paulo; 2011. Disponível em: http://repositorio.unifesp.br/handle/11600/9923
http://repositorio.unifesp.br/handle/116...

In financial terms, despite physical wastage accounting for a small proportion of the total amount invested by the Ministry of Health in immunization actions, even so wasted doses cost almost BRL 2 million. These are resources which, if they were not wasted, could be used in the most varied ways to benefit Ceará’s population. Furthermore, while this wastage continues to occur, imunobiologicals may be in shortage in other parts of the country, placing responsibility on PNI to manage the cold chain and distribution of immunobiologicals better.

It can therefore be considered that any shortcomings in cold chain can place a burden on the public budget, lead to waste, restrict the population’s access to immunization and have reduced vaccine coverage as their outcome.

Seabra Filho FT, Moura ADA and Braga AVL contributed to the conception and design of the article, data analysis and interpretation and drafting the first version of the manuscript. Jereissati NCC, Câncio KS and Silva MGC contributed to data analysis and interpretation, as well as critically reviewing the manuscript. All the authors have approved the final version and are responsible for all aspects of the work, including guaranteeing its accuracy and integrity.
Associate Editor: Doroteia Aparecida Höfelmann - orcid.org/0000-0003-1046-3319 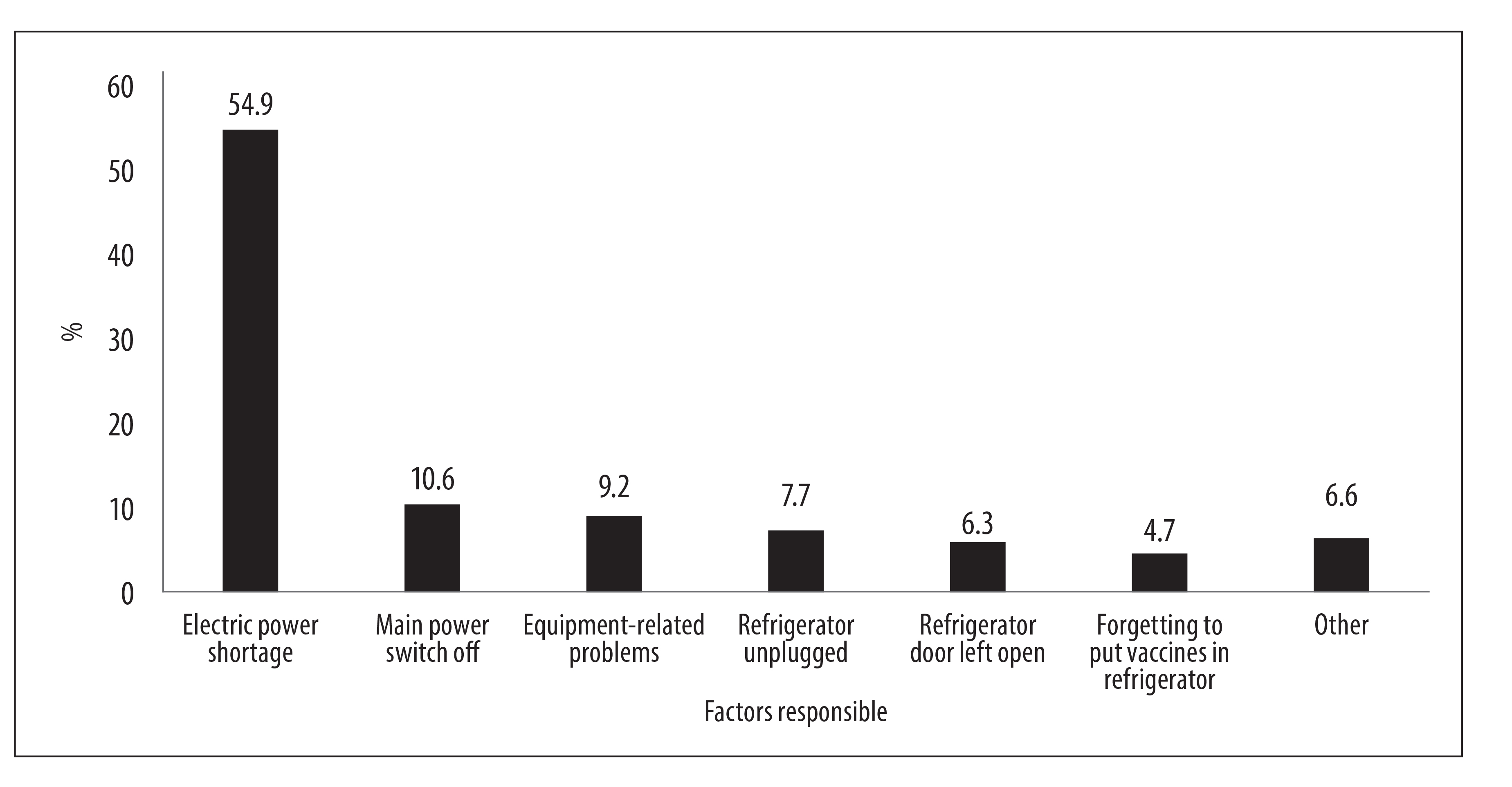