Chickenpox outbreak among Venezuelan immigrants housed in shelters and occupancies in the state of Roraima, Brazil, 2019: a descriptive study

To describe chickenpox outbreak among Venezuelan immigrants in shelters and occupancies in the municipalities of Pacaraima and Boa Vista, the state capital of Roraima, Brazil, and the control measures implemented.

This was a descriptive case series study, conducted between November 21 and December 13, 2019, based on secondary database obtained from the outbreak investigation made available by the General Coordination for the National Immunization Program. Descriptive analysis was performed using simple and relative frequency measurements, and measures of central tendency and dispersion were calculated.

Of the 9,591 immigrants, 38 active cases and 1,459 susceptible to varicella were identified. With regard to active cases, 23 were female, and those aged under 9 years (17 cases) were the most affected.

Chickenpox should comprise the monitoring of important events for Brazilian Public Health, given that some Latin American countries, including Venezuela, do not provide vaccines against the disease in their public health systems.44. Arlant LHF, Garcia MCP, Avila Aguero MLA, Cashat M, Parellada CI, Wolfson LJ. Burden of varicella in Latin America and the Caribbean: findings from a systematic literature review. BCM Public Health. 2019 May 8;19(1):528. doi: https://doi.org/10.1186/s12889-019-6795-0.
https://doi.org/10.1186/s12889-019-6795-...

There has been an increase in the migration flows to the municipality of Pacaraima, on the border between Brazil and Venezuela, since 2013, which has been intensified since 2017, when it was recorded the entry of 111,581 Venezuelans into Brazil, due to the socio-political and humanitarian crisis in that country.88. Câmara dos Deputados (BR). Primeiro relatório da comissão externa crise na fronteira da Venezuela com o Brasil [Internet]. Brasília, DF: Câmara dos Deputados; 2008 [citado 18 set. 2020]. Disponível em: https://www.camara.leg.br/proposicoesWeb/prop_codteor=1774525&filename=REL+1/2019+CEXVENEZ
https://www.camara.leg.br/proposicoesWeb... The knowledge of the vulnerability of immigrants, as well as technical information on chickenpox outbreak among this population, have contributed to the planning and implementation of more effective actions in the region.

The objective of this study was to describe chickenpox outbreak among Venezuelan immigrants in shelters and occupancies in the municipalities of Pacaraima and Boa Vista, Roraima, Brazil, and the control measures implemented.

This was a descriptive case series study, which analyzed anonymized secondary data based on the investigation of the chickenpox outbreak among Venezuelan immigrants obtained from shelters and occupancies in the municipalities of Pacaraima and Boa Vista in the state of Roraima, in 2019. The database used in this study was made available in August 2020 by the General Coordination for the National Immunization Program (CGPNI).

In 2019, the CGPNI took action in the face of an outbreak of chickenpox in the municipalities of Boa Vista and Pacaraima. The research participants were Venezuelan immigrants housed in 14 shelters and 14 occupancies in both municipalities, from November 21 to December 13, 2019.

For this investigation, an active search was carried out in all shelters and occupancies that had registered chickenpox cases. A semi-structured paper form was used, including variables of socioeconomic, demographic, clinical and epidemiological data.

For participant selection, the following definitions were adopted:

Individuals who presented clinical manifestations compatible with chickenpox in the period from five to 26 days after getting the vaccine were excluded from the study because it was possibly vaccine side effects. Other definitions of events or situations used in the study were:

Socioeconomic and demographic variables analized were:

Clinical and epidemiological variables included in the study were:

All prevention and control actions implemented by the outbreak investigation teams had the support of the municipal and state teams of the PNI, totaling 15 nursing technicians. Among these actions, Varicella- Zoster immune globulin (human) (VariZIG) was administered in pregnant women and those under 1 year of age, and vaccination blockade was performed with tetravalent or monovalent vaccines, according to the technical determinants of PNI.

The analyses were performed using descriptive statistics, adopting simple and relative frequency measurements. Measures of central tendency (median) and dispersion (minimum and maximum values) were also calculated. The Epi Info 7.2™ and Excel 2013® were used. The results of the analyses were presented jointly for both municipalities - Pacaraima and Boa Vista - due to the transience of the majority of immigrants who spent little time in Pacaraima and chose Boa Vista as their destination.

The study project was submitted to the Brazil’s National Committee for Ethics in Research (CONEP) of the Ministry of Health and was approved. CONEP Opinion No. 4,416,520. November 24, 2020.

During the study period, 9,591 immigrants from Venezuela living in the 14 shelters and 14 occupancies in the municipalities of Pacaraima and Boa Vista were identified. 1,500 immigrants lives in the shelters and occupancies where active cases and susceptible to chickenpox were found. Of these, 41 were considered active cases of chickenpox, initially, and three of which were discarded due to the possibility of being vaccine side effects, remaining 38 cases; 1,459 comprised the group of people for whom prevention and control measures were implemented during the fieldwork (Figure 1). Moreover, during the study, no deaths were recorded among the aforementioned active cases of chickenpox.

Of the 38 cases evaluated, 23 were female; 17 were children under 9 years of age, being this age group the most affected, while 13 were people aged 10 to 19 years. As for schooling, 14 had incomplete elementary school. Regarding professional life, eight had no job in Venezuela and 11 did not work in Brazil (Table 1).

All 38 cases presented rash, 23 had fever, 12 had headache and 10 reported malaise. In 12 of them, papulovesicular rash started on the face and 30 presented generalized rash. Regarding medical care, 22 reported not having sought medical care; one individual presented skin infection as a complication (Table 2).

Of the 38 cases, 31 had a vaccination card. Of these, 12 were not vaccinated and 18 had no indication of vaccination. Of the total cases, 25 reported having already received information about the importance of chickenpox vaccine (Table 3).

Taking into consideration the families with active cases of chickenpox during the study period, 184 people in total, with a median of four people per family, ranging from one to 13 individuals. In 2019, 84 members of the families were infected with chickenpox. With regard to the 37 immigrant families, 29 entered Brazil in 2019, through the border between Venezuela and the municipality of Pacaraima, were assisted by Operation Welcome and then went to Boa Vista. The median time from entry into Brazil to papulovesicular rash onset was 93 days, ranging from 24 to 1,095 days. Regarding the householders, 26 did not intend to return to Venezuela and of these, 15 reported being due to the crisis in their country.

It is also worth mentioning that 1,459 people received some kind of care related to prevention and control measures implemented during the fieldwork. Of these, 125 were children younger than 9 months, 53 pregnant women received a dose of Varicella- Zoster immune globulin (human) (VariZIG) and 1,281 received a dose of varicella-containing vaccine (tetraviral or monovalent) as vaccine blocking action.

The findings on chickenpox outbreak in the municipalities of Pacaraima and Boa Vista, in the state of Roraima, showed that, taking into consideration the large population identified, the number of active cases was much lower than expected for the local scenario. The active cases were mostly related to children under 9 years of age and adolescents/young adults, corroborating the results of a study conducted in 2017, in Mexico, where a higher prevalence was found among individuals under 9 years of age.1010. Vázquez M, Cravioto P, Galván F, Guarneros D, Pastor VH. Varicela y herpes zóster: retos para la salud pública. Salud Publica Mex. 2017;59(6):650-6. doi: https://doi.org/10.21149/7997.
https://doi.org/10.21149/7997...

The number of pregnant women and children younger than 9 months observed in this study points to a serious public health problem, given the high risk of abortion and fetal malformation to which exposed pregnant women are susceptible, as well as the occurrence of severe cases, complications and even death.11. Berezin EN, Feldman C. Varicela-zoster. In: Focaccia R, Veronesi R, editores. Tratado de infectologia. 5a ed. Sao Paulo: Atheneu; 2015. p. 723-34.

Almost all cases in this study presented mild symptoms and most of them did not seek medical care because chickenpox usually presents a benign course.1111. Losurdo G, Bertoluzzo L, Canale F, Timitilli A, Bondi A, Castagnola E, et al. Varicella and its complications as cause of hospitalization. Infez Med. 2005;13(4):229-34. Disponível em: https://europepmc.org/article/med/16388278.
https://europepmc.org/article/med/163882... However, a study conducted in France from 1987 to 2002 showed that chickenpox, often considered as a mild disease, can be responsible for severe complications in immunocompetent children.1212. Mallet E, Delalande-Dutilleul L, Marguet C, Mouterde O. Evaluation of varicella complications through a retrospective hospital survey in a paediatric center over 16 years in France. Arch Pediatr. 2004 Sep;11(9):1145-51. doi: http://doi.org/10.1016/j.arcped.2004.07.002.
https://doi.org/10.1016/j.arcped.2004.07...

More than half of the migrant families taking part in this study reported having been assisted by Operation Welcome, from which, when indicated, they received the following vaccines: triple viral, yellow fever, diphtheria, tetanus and pertussis (DTP) and diphtheria-tetanus (dT). Since the beginning of this migratory process in the state of Roraima, in 2017, the monovalent varicella vaccine has been also administered at the time of welcoming families. In 2013, according to PNI guidelines, vaccination began to be performed by the Primary Health Care of the Brazilian National Health System (SUS) in the municipalities of Pacaraima and Boa Vista.1717. Ministério da Saúde (BR), Secretaria de Vigilância em Saúde. Calendário vacinal. Brasília, DF: MS; 2020.

A Japanese study conducted with international adult immigrants between 2012 and 2016, showed that 44% of refugees had varicella infections after arrival in Denmark, thus it was deemed necessary to check VZV immunity for immigrants before they entered that country.1818. Takaya S, Kutsuna S, Katanami Y, Yamamoto K, Takeshita N, Hayakawa K, et al. Varicella in adult foreigners at a referral hospital, Central Tokyo, Japan, 2012-2016. Emerg Infect Dis. 2020;26(1):114-7. doi: https://dx.doi.org/10.3201/eid2601.170565.
https://doi.org/10.3201/eid2601.170565... The study conducted in Roraima, which analyzed the median time from the entry into Brazil to the rash onset, showed that the immigrants with chickenpox in Pacaraima and Boa Vista were probably infected in Brazil. This finding reinforces the importance of vaccination on the border at the time of entry into the country, given that the varicella vaccine in Venezuela was only available in the private health network by 2019.44. Arlant LHF, Garcia MCP, Avila Aguero MLA, Cashat M, Parellada CI, Wolfson LJ. Burden of varicella in Latin America and the Caribbean: findings from a systematic literature review. BCM Public Health. 2019 May 8;19(1):528. doi: https://doi.org/10.1186/s12889-019-6795-0.
https://doi.org/10.1186/s12889-019-6795-...

The large number of people who shared the same shelter, mostly unvaccinated, or who are not in the age group eligible to receive tetra viral vaccine, may have contributed to the permanence of chickenpox cases in shelters and occupancies, corroborating the results of a study conducted in Egypt, in the period from 2016 to 2017, when it was concluded that the incidence of chickenpox may be related to population density.1919. Ibrahim EG, Abdel Wahed WY, Eid HM, Deeb WS. Seroprevalence of varicella-zoster virus among pregnant women in Fayoum Governorate, Egypt. J Egypt Public Health Assoc. 2019;94(1):2. doi: https://doi.org/10.1186/s42506-018-0002-5.
https://doi.org/10.1186/s42506-018-0002-...

Large-scale administration of immune globulin in children younger than 9 months and pregnant women, in addition to intensification of vaccination activities, were strategic actions aimed at interrupting transmission of the disease and preventing complications among children younger than 9 months, as well as possible congenital anomalies. This measure, implemented in Roraima, was also identified in a study conducted in 2012, during a chickenpox outbreak among African immigrants. At that time, early vaccination was considered necessary for all, when an outbreak was detected in closed-residential settings.2020. Haas EJ, Dukhan L, Goldstein L, Lyandres M, Gdalevich M. Use of vaccination in a large outbreak of primary varicella in a detention setting for African immigrants. Int Health. 2014 Sep;6(3):203-7. doi: https://doi.org/10.1093/inthealth/ihu017.
https://doi.org/10.1093/inthealth/ihu017...

As a limitation of this study, classification bias may have occurred, given the possibility of some excluded individuals having been active cases of chickenpox, underestimating the results.

Taking these results, it can be concluded that people susceptible to chickenpox were identified during this investigation, leading to the adoption of immunization actions aimed at controlling transmission, preventing severe cases and deaths, and overload in the local healthcare system. We have highlighted, in this study, the importance of actions intended to monitor the health status of those people, the possibility of timely treatment and the adoption of effective measures in order to control varicella-zoster virus infection. 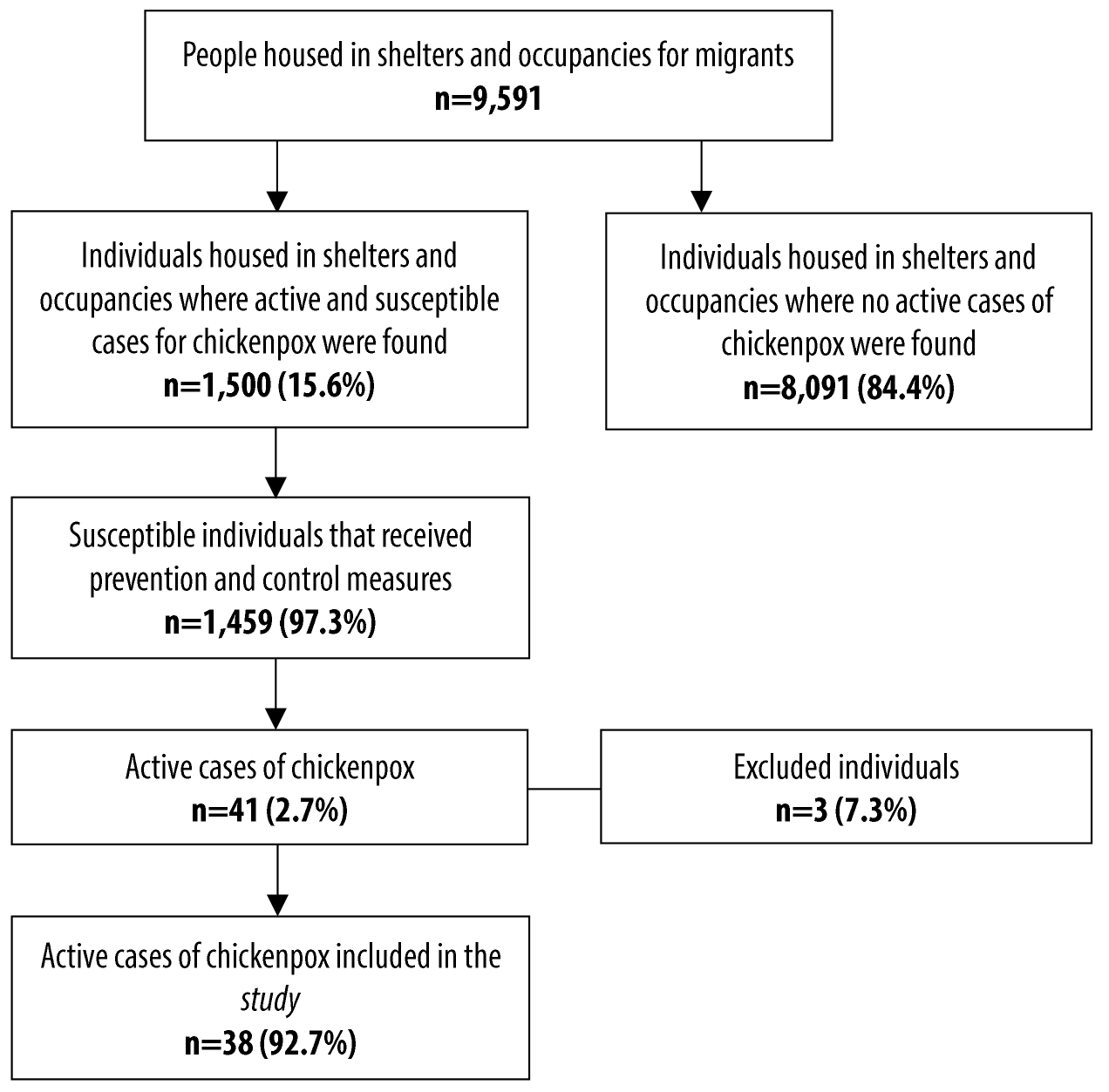