Population seroprevalence of celiac disease in urban areas of Peru

Licensed in Medical Technology with a specialty in Clinical Laboratory

bachelor of Science in Medical Technology

The objective of the study was to determine the seroprevalence of celiac disease (CD) in urban areas of Peru using a population-based sample. A random sample of women and men 18 to 29 years old from 26 cities in Peru was screened. An anti-tissue transglutaminase IgA kit was used for the detection of CD. Results higher than 20 AU / ml were considered positive. The weighted prevalence of celiac disease was 1.2% (CI 95%: 0.0% - 2.4%), thus the estimated number of people living with CD in Peru was 341,783. CD prevalence in Peru is similar to the world average.

When compared to CD, NCSG shows no association with any genetic or immunological alteration, nonetheless both conditions present a similar clinical picture. This seems to be due to the fact that a gluten-derived fragment, alpha-gliadin, would be the main target epitope associated with duodenal disorders present in both CD and NCSG 33. Lebwohl B, Ludvigsson JF, Green PHR. Celiac disease and non-celiac gluten sensitivity. BMJ. 2015;351:h4347..

Motivation for the study: Celiac disease has different clinical presentations, being the undiagnosed cases the larger group yet to be recognized. A serological screening can be an early detection test for celiac disease; furthermore, it would avoid fatal complications.

Main findings: This is the first “extra-nosocomial” population-based study in Peru. A prevalence of celiac disease of 1.2% was found using the IgA tissue antitransglutaminase test.

These tests detect antibodies that are reactive to gluten (IgA and/or IgG), such as anti-endomysial antibody (EMA), anti-glia-din antibody (AGA), and anti- transglutaminase antibody (tTGA). The latter is used for the early detection of CD at any age, which is then confirmed by an intestinal biopsy 1010. Rostom A, Murray JA, Kagnoff MF. Medical Position Statement on Celiac Disease. Gastroenterology. 2006;131(6):1977-80.. The purpose of the study was to determine the seroprevalence of CD in urban populations of Peru using a population-based sample.

Hemolyzed, lipemic samples were discarded; as well as cryovials with insufficient remaining volume (<10ul) of serum or samples without epidemiological information. The samples were processed by colorimetric enzyme-linked immunosorbent assay (ELISA). The IgA tissue antitransglutaminase kit (Diametra Diagnostic, Italy) was used according to the manufacturer’s protocol, which has a sensitivity of 93% and specificity of 95% 1212. Kowalski K, Mulak A, Jasinska M, Paradowski Leszek. Diagnostic challenges in celiac disease. Adv Clin Exp Med. 2017; 26(4): 729-37.. The samples and the reagent kit were defrosted at room temperature for about 30 minutes. One positive and one negative control were included. The samples were diluted 1:10 and placed in microwells coated with recombinant tissue transglutaminase. They were incubated for 30 minutes at room temperature.

The supernatant was discarded and the microwells were washed three times to remove the remaining unbound components. Anti-human IgA conjugate marked with horseradish peroxidase (HRP) was then added and incubated for 30 minutes at room temperature. After washing, the excess conjugate was removed, the substrate was added with trimethylbenzidine (TMB) and incubated for 15 minutes at room temperature protected from the light. The reaction was stopped with sulphuric acid.

Participants provided verbal consent for their participation in the study. The original study’s informed consent form contemplated the storage of samples for future studies without the inclusion of personal identifiers. As part of this study, only codes were used to identify the samples and link them to their epidemiological information. The present study was approved by the Institutional Research Ethics Committee of Universidad Peruana Cayetano Heredia (code SIDISI 60226).

Of the total number of individuals, 623 lived in the coastal region, 281 to the sierra and 197 to the jungle. The prevalence of CD in the sierra (1.8%) was not significantly higher than that found on the coast or in the jungle (1.1 and 0.9%, respectively).

Although few participants spoke Quechua or Aymara (119 and 19, respectively), no statistically significant differences were found in the prevalence of CD between these and the rest of the participants in the study (p=0.288 and p=0.811, respectively).

This is the first study in Latin America to evaluate the prevalence of CD by serological screening for tissue antitransglutaminase IgA in a population-based sample, and a prevalence of 1.2% was found. If the prevalence for other ages and geographical areas of the country in 2007 had been the same, then it is estimated that for that year the number of people living with celiac disease in Peru was 341,783.

In the United States, the prevalence of undiagnosed CD is increasing. A study determined the presence of IgA tissue antitransglutaminase in stored samples (for at least 20 years at -20 °C), to determine changes in prevalence over a 50-year period 1313. Rubio-Tapia A, Ludvigsson JF, Choung RS, Brantner TL, Rajkumar SV, Landgren O, et al. Increased mortality among men aged 50 years old or above with elevated IgA anti-transglutaminase antibodies: NHANES III. BMC Gastroenterol. 2016;16(1):136.. Samples taken between 1948 and 1954 showed a prevalence of 0.2% and those taken between 1995 and 2003 showed a prevalence of 0.8%, both in adults over 50 years. On the other hand, in samples of persons aged 18 to 49 taken between 2006 and 2008, a prevalence of 0.9% was found. Previously in the mentioned study the presence of IgA was revealed in the old samples using nephelometry.

Another study conducted in Argentina 1414. Gomez JC, Selvaggio GS, Viola M, Pizarro B, la Motta G, de Barrio S, et al. Prevalence of celiac disease in Argentina: screening of an adult population in the La Plata area. Am J Gastroenterol. 2001;96(9):2700-4., using AGA (IgA and IgG) and EmA (IgA) as serological markers, determined a CD prevalence of 0.6%. Our study reveals a higher prevalence, probably because of the age group and the type of serological test used. On the other hand, a study in Brazil 1515. Melo SBC, Fernandes MIM, Peres LC, Troncon LEA, Galvão LC. Prevalence and demographic characteristics of celiac disease among blood donors in Ribeirão Preto, State of São Paulo, Brazil. Dig Dis Sci. 2006;51(5):1020-5. in people of 18-65 years old without anemia found a prevalence of 0.33% using the anti-TBM IgA and anti-EmA IgA test. The low prevalence found may respond to the fact that anemia is an atypical presentation of CD.

Serological screening for CD is recommended instead of the use of invasive methods such as biopsies, being an early diagnostic choice to rule out CD. According to ESPGHAN (European Society for Pediatric Gastroenterology, Hepatology and Nutrition) 1717. Smarrazzo A, Misak Z, Costa S, Micetic-Turk D, Abu-Zekry M, Kansu A, et al. Diagnosis of celiac disease and applicability of ESPGHAN guidelines in Mediterranean countries: a real life prospective study. BMC Gastroenterol. 2017;17(1):17., the diagnosis of CD can be confirmed with anti-transglutaminase levels above ten times the upper normal limits (≥20 U/ml, reference value for our study), this levels are compared to Marsh-3 type villous atrophy. This emphasizes the usefulness of the IgA tTGA serological test as the most reliable serological marker for CD, not only because of its high specificity and sensitivity, but also because of its usefulness, as samples can be stored for extended periods of time,being possible to reuse them in cryopreserved samples 1818. Wengrower D, Doron D, Goldin E, Granot E. Should stored Serum of Patients Previously Tested for Celiac Disease Serology be Retested for Transglutaminase Antibodies?. J Clin Gastroenterol. 2006;40(9):806-8., as in our case. Indeed, having a reliable serological test would allow for a reduction in costs and time in the diagnosis of CD.

The absence of information on gastrointestinal symptoms and history of CD could constitute a limitation of the present study, however, the clinical correlation of serology is quite well known.

Our study found a higher prevalence of CD in people from the sierra. This could correspond to genetic differences, or to environmental factors, such as height and consequent hypoxia. Although other studies have found higher prevalence in women 66. Parra-Medina R, Molano-Gonzalez N, Rojas-Villarraga A, Agmon-Levin N, Arango M-T, Shoenfeld Y, et al. Prevalence of celiac disease in latin america: a systematic review and meta-regression. PloS One. 2015;10(5):e0124040., our study found higher prevalence in the male population, a difference for which we found no cause.

In conclusion, the present study is the first to be carried out in Peru based on a population sample of young adults, showing a higher prevalence than reported in other studies of the American continent, but similar to the world average. More studies of seroprevalence in populations that are atypical for CD are suggested, taking into account the different forms of clinical presentation, since in most cases celiac disease has no apparent symptoms. 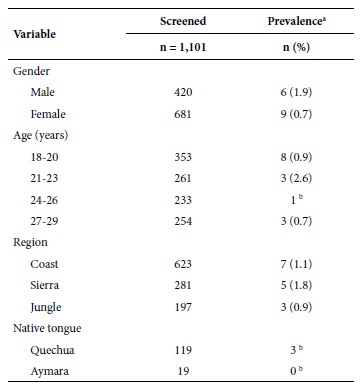