The study’s objective was to determine the influence of vaginal birth compared to cesarean birth on the content of lactic acid bacteria with probiotic characteristics from newborns. Vaginal and cesarean sec tion meconium samples of lactic acid were evaluated, which were duly enriched, seeded and incubated. The resulting colonies were identified to be subjected to bile salt tolerance, acid pH, and fermentation. A greater development of meconium colonies was obtained in those born vaginally compared to those born by caesarean section (p <0.001). A total of 48 strains were isolated, the majority being tolerant to bile salts and acid pH; likewise, the fermentation of lactose in milk was positive. This study supports previous findings that support vaginal birth favors the greatest development of lactic acid bacteria with probiotic characteristics, compared to cesarean birth, and highlights the presence of bacteria of the genus Lactobacillus.

The genera belonging to the natural microbiota of the intestine are Lactobacillus and Bifidobacterium, which develop differently depending on the type of delivery. The presence of these bacteria has been reported in the meconium of 10-days-old newborns born vaginally; and in 30-days-old newborns delivered by cesarean section (33. Grönlund MM, Lehtonen OP, Ferola E, Kero P. Fecal microflora in healthy infants born by different methods of delivery: permanent changes in intestinal flora after cesarean delivery. J Pediatr Gastroenterol Nutr. 1999;28(1):19-25.. In addition, colonization by lactobacilli in vaginal births occurs in a higher proportion (59%), compared to those born by cesarean section (4%). The latter are colonized more often by Clostridium difficile, bacteria that are normally found in the digestive system of people who are hospitalized or treated with antibiotics 44. Mitsou EK, Kirtzalidou E, Oikonomou I, Liosis G, Kyriacou A. Fecal microflora of Greek healthy neonates. Anaerobe. 2008;14(2):94-101. doi: 10.1016/j.anaerobe.2007.11.002.
https://doi.org/10.1016/j.anaerobe.2007.... .

Therefore, the objective of the present study was to determine whether the type of birth, vaginal or by cesarean section, influences the content of lactic acid bacteria with probiotic potential, found in the meconium of human neonates.

Motivation for the study: Childbirth is considered the culmination of gestation. In Peru, since 2015, 34.5% of births occur by cesarean section, which may influence the content of intestinal microbiota, specifically lactic acid bacteria.

Main findings: Increased development of Lactobacillus bacteria was found in the Meconium from vaginal newborns compared to those born by cesarean section.

Implications: The type of delivery influences the content of lactic acid bacteria from the meconium of newborns, and it was found that vaginal delivery is more favorable for bacteria development.

Analytical observational study. During four months, 60 samples of meconium were randomly collected from human neonates from zero to three days old, from the National Institute of Perinatal Maternity (INMP) in Lima, 30 samples corresponding to vaginal deliveries and 30 to cesarean sections. Thirty samples were considered for each group of neonates, since the average number of births per day at the INMP is 60.

The test was conducted at the Microbiology and Biotechnology Laboratory of the Faculty of Zootechnics of Universidad Nacional Agraria La Molina (UNALM)). The test used 0.5 ml of inoculum activated for 18 hours in MRS broth, which was then added to tubes containing 0.3% of bovine bile salts (New Zealand, Sigma) and 4.5 ml of MRS broth; which was incubated at 37 °C for 24 hours 1111. Lara C, Burgos A. Potencial probiótico de cepas nativas para uso como aditivos en la alimentación avícola. Rev Colomb Biotecnol. 2012;14(1):31-40.. The samples were read in a spectrophotometer at 600 nm (Genesys 10S UV-VIS model, Thermo Scientific), and the results, expressed as optical density. In addition, the percentage of survival (R) was calculated by the ratio of the log CFU/ml of both. The sample with bile salts, and the sample without 1212. Sánchez L, Omura M, Lucas A, Pérez T, Llanes M, Luce C. Cepas de Lactobacillus spp. Con capacidades probióticas aisladas del tracto intestinal de terneros neonatos. Rev Salud Anim. 2015;37(2):94-104..

The test consisted in inoculating 3% of the strains into 20 ml of pasteurized milk (3/100v) which was incubated at 37 °C for 18 hours, to finally measure the final pH 1212. Sánchez L, Omura M, Lucas A, Pérez T, Llanes M, Luce C. Cepas de Lactobacillus spp. Con capacidades probióticas aisladas del tracto intestinal de terneros neonatos. Rev Salud Anim. 2015;37(2):94-104.. This test was carried out in the Microbial Ecology and Biotechnology Laboratory of the Faculty of Sciences at UNALM.

The data recorded to determine the presence of lactic acid bacteria in the meconium of vaginal and caesarean section newborns were analyzed twice. The Kolmogorov-Smirnov test was used to assess normality. To evaluate the differences in colony averages according to the type of delivery, the Mann Whitney U test was used through the SPSS 20 program. To analyze the acid pH and bile salt resistance tests, the Student’s t-test was used in R-3.4.0.

The study was approved by the INMP Research Ethics Committee. The purpose of the research was explained to the mothers of the infants, who gave their consent to take the samples.

Thumbnail
Figure 1
Meconium in neonates had a greenish-yellow coloration due to formula feeding in those born by cesarean section (left) and had a greenish color in breastfed neonates born vaginally (right).

In the pre-enrichment stage, two meconium samples from newborns by cesarean section formed gases that released unpleasant odors, said samples were then planted in MacConkey agar. After incubation, the presence of colonies of enterobacteria was confirmed.

In the plate growth test, 28 of 30 meconium samples from vaginal newborns showed growth of colonies of lactic acid bacteria (93.3%) compared to two of 30 meconium samples from those born by caesarean section (6.7%) (Figure 2). Likewise, the average number of colonies was higher in the meconium of those born vaginally (p<0.001) (Table 1). These colonies were observed under the microscope, and long thin bacilli and short bacilli were found, which correspond to characteristics of lactic acid bacteria (9). A total of 48 colonies were isolated and planted in modified MRS agar, and a better differentiation of the colonies according to size, color and border was observed (Figure 3).

Forty-eight strains of lactic acid bacteria were isolated and subjected to a tolerance of >30% survival for 24 hours at an acidic pH of 3.0, and >20% survival at 0.3% bile salt concentration. A total of 33 (68.7%) surviving strains were obtained with greater resistance to acid than to bile salts, measured by absorbance.

Among the study limitations, it should be mentioned that, the samples extraction was limited to two to three per week, for each group evaluated. The time interval between the collection of each sample depended on the defecation of the neonate, which influenced its transfer to the laboratory for the corresponding analyses. However, once the sample was collected, it was kept in adequate conditions to avoid contamination and deterioration.

Finally, it can be concluded that meconium from vaginal newborns showed a greater development of lactic acid bacteria with a greater presence of bacteria of the genus Lactobacillus compared to those born by cesarean section, in whom the presence of enterobacteria was evident.

To Dr. Luz Veliz Sedano and Dr. Aida Cordero for their valuable contributions to the development of this research.

EPA and LSB carried out the conception and design of the article, and the data collection. EPA, ASM, LSB and NBO performed the data analysis and interpretation and the writing of the article. ASM, NBO and ANS provided technical and administrative assistance. All authors approved the final version of the article.

All authors have none to declare.

Thumbnail
Figure 1
Meconium in neonates had a greenish-yellow coloration due to formula feeding in those born by cesarean section (left) and had a greenish color in breastfed neonates born vaginally (right).
Thumbnail
Figure 2
Growth of colonies on MRS agar. A) There is evidence of increased growth of acidic bacteria from vaginal newborns. B) Compared to those born by cesarean section.
Thumbnail
Figure 3
Isolation of colonies on MRS agar from the meconium of vaginal newborns. A) MRS agar modified with blue bromophenol to differentiate colonies of lactic acid bacteria. B) Agar without growth modified MRS. C) Modified MRS agar with isolated colonies of round shape characteristic of lactic acid bacteria
Thumbnail
Table 1
Count of lactic acid bacteria developed on MRS agar and acid pH resistance test, in vaginal newborns and by cesarean section.

Figure 1   Meconium in neonates had a greenish-yellow coloration due to formula feeding in those born by cesarean section (left) and had a greenish color in breastfed neonates born vaginally (right). 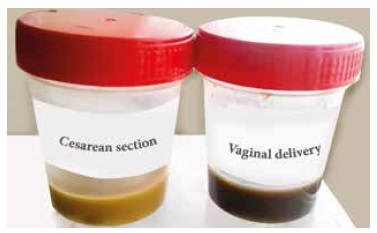 Figure 2   Growth of colonies on MRS agar. A) There is evidence of increased growth of acidic bacteria from vaginal newborns. B) Compared to those born by cesarean section. 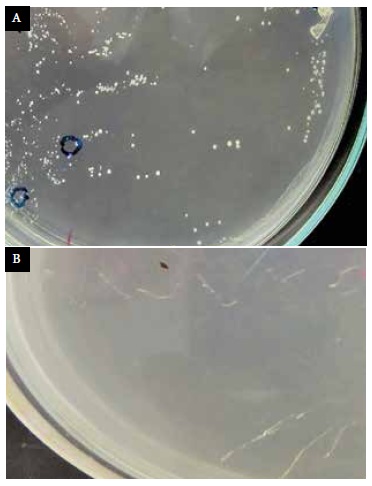