Within the varied etiology of fungemias, we find filamentous fungi and yeast-like fungi; which are the most predominant. Although Candida albicans (C. albicans) has long been the most common species to be isolated, other Candida species and yeasts other than Candida appear to emerge and displace C. albicans55. Castanheira M. Fungemia surveillance in Denmark demonstrates emergence of non-albicans Candida species and higher antifungal usage and resistance rates than in other nations. J Clin Microbiol. 2018; 56(4):e01907-17. doi: 10.1016/j.diagmicrobio.2016.02.009.
https://doi.org/10.1016/j.diagmicrobio.2... ,66. Capoor M, Gupta D, Verma P, Sachdeva H. Rare yeasts causing fungemia in immunocompromised and haematology patients: case series from Delhi. Indian J Med Microbiol. 2015; 33(4):576. doi: 10.1128/JCM.01907-17. doi: 10.4103/0255-0857.167320.
https://doi.org/10.1128/JCM.01907-17... . Besides, these pathogens have different sensitivity profiles to antifungal agents 77. Castanheira M, Messer S, Rhomberg P, Pfaller M. Antifungal susceptibility patterns of a global collection of fungal isolates: results of the SENTRY Antifungal Surveillance Program (2013). Diagn Microbiol Infect Dis. 2016; 85(2):200-204. doi: 10.1016/j.diagmicrobio.2016.02.009.
https://doi.org/10.1016/j.diagmicrobio.2... . Therefore, the associated epidemiology, and etiology have implications for the therapeutic management and outcome of fungemias. The demographic, clinical and etiological characteristics of fungi have been poorly described in our population. Knowing the characteristics of fungemias in hospitals will improve control mechanisms and treatment for these invasive mycoses.

The objective of this study is to determine the characteristics of fungemias in oncology patients hospitalized from 2012 to 2016 at the Instituto Nacional de Enfermedades Neoplásicas (INEN) in Peru.

Motivation for the study: Fungemias have high morbidity and mortality rates in oncological patients, so it is necessary to know their epidemiological characteristics.

Implications: Knowledge of the epidemiological characteristics in our population will improve therapy and control of these invasive mycoses.

A retrospective descriptive study of fungemia cases diagnosed in the microbiology laboratory of INEN between January 2012 and December 2016. The information was obtained from the registry of the Microbiology Laboratory and the INEN computer system. All cases in which the etiological agent could be identified were included. Duplicate isolates corresponding to the same patient were excluded from the study.

Fungemia diagnosis was made by blood cultures processed in the automated system BD BactecTM Fx. The yeast identification was made by morphological analysis, according to Dalmau’s technique in rice extract agar; and by biochemical analysis, according to the chromogenic characteristics in CHROMagar medium and the characteristics of carbohydrate assimilation in the commercial API 20C AUX system (bioMérieux) 88. Freydiere AM, Guinet R, Boiron P. Yeast identification in the clinical microbiology laboratory; phenotypical methods. Med Mycol. 2001; 39: 9-33. doi: 10.1080/mmy.39.1.9.33.
https://doi.org/10.1080/mmy.39.1.9.33... . Filamentous fungi were identified by their macroscopic and microscopic characteristics 99. Larone DH, Larone DH. Medically important fungi: a guide to identification. New York: Elsevier; 1987..

Descriptive statistics were used, the results were summarized in frequencies and percentages, and in line and bar charts to evaluate the variables distribution. This study was performed with data from the registry of the microbiology laboratory and the computer system of the INEN, so it does not represent any risk for patients. The study was evaluated and approved by the INEN Research Committee.

Fungemias were more frequent in the age group from 0 to 19 years old (27.4%) and in the female population (54.4%). From the total, 56.5% patients had neutropenia; 64.6%, hematological neoplasias; 31.9%, diagnosed with acute lymphocytic leukemia; and 10.2% was from the Abdomen Medical Department. The demographic and clinical characteristics of the patients with fungemias distributed by etiology are described in Table 1.

Compared to the fungemias caused by non-albicans Candida, those caused by C. albicans had a higher prevalence rate in patients from the Abdomen Medical Department (17.2% versus 8.0%). When Candida species were analyzed in these patients, it was found that C. albicans alone was more frequent than C. tropicalis (17.2% vs. 5.2%).

Furthermore, when analyzing the type of neoplasia and the degree of neutropenia, it was found that patients with solid tumors without neutropenia were more frequent than those having neutropenia (67.5% vs 10.6%).

Thumbnail
Figure 1
Percentage distribution of the grouped etiology of fungemias, from 2012 to 2016.

Variations in fungemia frequency and in the degree of neutropenia were found and were related to the time elapsed. Fungicides in patients without neutropenia increased from 23.5% in 2012 to 55.0% in 2016. In addition, we analyzed the variation in the frequency of fungemias and the type of neoplasia and did not find a sustained increase over time.

Thumbnail
Figure 2
Proportion of fungemia according to clinical characteristics and age group.

On the other hand, the high frequency of fungemia by C. albicans in non-neutropenic patients and by C. tropicalis in neutropenic patients can be explained by the relationship between the type of neoplasia and the degree of neutropenia. Fungemia by C. albicans occurs in solid tumors without neutropenia, while C. tropicalis appears in hematological neoplasias with neutropenia. Some studies show that non-neutropenia is more frequent in patients with solid tumors than in hematological neoplasias 1616. Gustinetti G, Mikulska M. Bloodstream infections in neutropenic cancer patients: a practical update. Virulence. 2016; 7(3):280-297. doi: 10.1080/21505594.2016.1156821 .
https://doi.org/10.1080/21505594.2016.11... ,1717. Noskin G. Management of Infectious Complication in Cancer Patients. Boston, MA: Springer; 2007..

Possible trends were found, and these appear to be clinically correlated, but further evaluation is needed. The increase in fungemia duration in patients without neutropenia would indicate that neutropenia is less necessary for the development of these invasive mycoses. This increase would not be due to an increase in solid tumors as these remain invariable over time. The continuous increase of fungemia cases according to age in patients with solid tumors (particularly gastrointestinal tumors) may be due to characteristics of these neoplasias. Patients with solid tumors are older than those with hematological neoplasias 2020. Puig-Asensio M, Ruiz-Camps I, Fernández-Ruiz M, Aguado J, Muñoz P, Valerio M, et al. Epidemiology and outcome of candidaemia in patients with oncological and haematological malignancies: results from a population-based surveillance in Spain. Clin Microbiol Infect. 2015; 21(5):491-e1. doi: 10.1016/j.cmi.2014.12.027 .
https://doi.org/10.1016/j.cmi.2014.12.02... .

Finally, the continuous increasing number of fungemias by C. albicans in patients without neutropenia, which increases with age, can be explained by the relationship between these two characteristics and solid tumors, something already described in previous paragraphs. Solid tumors are more frequent in older adults and, at the same time, are related to fungemias by C. albicans and not having neutropenia.

Our study had some limitations, such as data retrospectively collected and the small sample for some categories of the variables considered, which prevented an inferential analysis. Also, fungal identification was performed at the phenotypic level, although molecular techniques provide a more reliable identification, they are expensive, complex, and not very applicable to hospital laboratories.

Future studies are advised to assess the antifungal sensitivity of isolates, the association with risk factors for fungemia occurrence and the outcome of fungemias. This will allow us to understand the current scenario of fungemias in cancer patients and to take appropriate control and treatment measures.

Figure 1   Percentage distribution of the grouped etiology of fungemias, from 2012 to 2016. 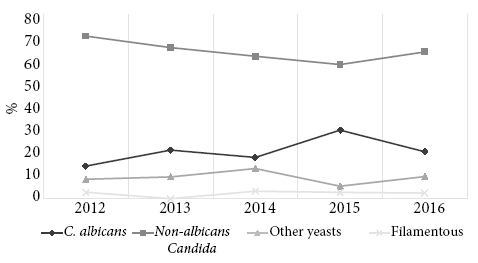 Figure 2   Proportion of fungemia according to clinical characteristics and age group. 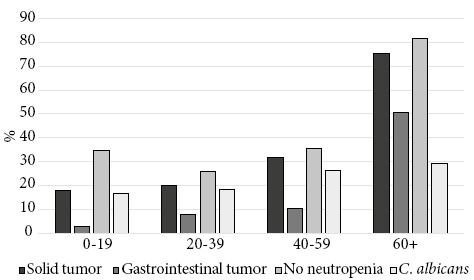 Table 1   Demographic and clinical characteristics of patients with fungemias distributed by etiology (285 cases). 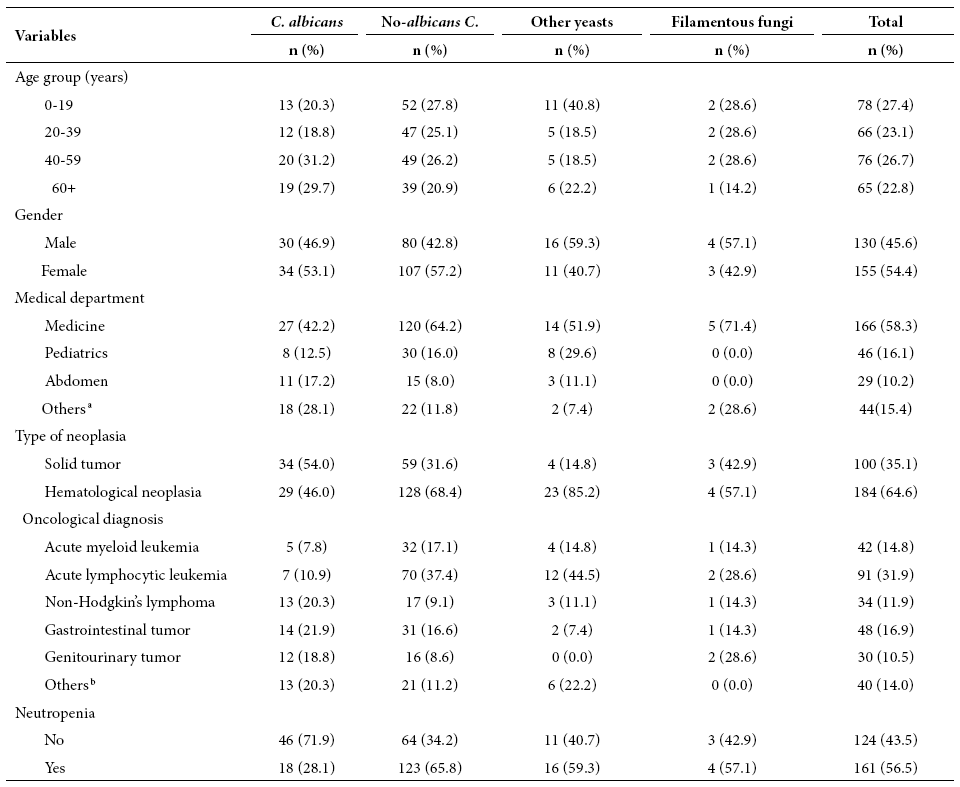