In order to describe the genomic characteristics related to antimicrobial resistance and comparative genomics of diarrheagenic Escherichia coli (DEC), 14 DEC isolates from the strain collection of the Instituto Nacional de Salud (INS) were subjected to genome sequencing. We used bioinformatic procedures to analyze the obtained sequences in order to look for microbial resistance genes and genetic regions related to pathotypes and phylogroups. Several antimicrobial resistance determinants were detected, but the production of beta-lactamases and mutations associated to quinolone resistance were the most relevant. Additionally, we observed isolates of the same pathotype grouped in different phylogroups. The comparative genomics analysis showed a greater number of orthologous genes in isolates from the same pathotype and phylogroup. In conclusion, DEC isolates from Lima, Peru, showed resistance to multiple drugs; likewise, molecular and phylogenetic diversity was observed in several pathotypes and phylogroups.

In Peru, bacterial resistance surveillance is mainly carried out by phenotypic methods, such as Kirby-Bauer or the minimum inhibitory concentration (MIC), recommended by the Clinical and Laboratory Standards Institute (CLSI). Most studies focus on the phenotypic detection of extended spectrum beta-lactamases (ESBL) and quinolone resistance, however, in recent years the study of resistance genes has been carried out by using molecular methods, such as PCR and Sanger sequencing 44. Ochoa TJ, Ruiz J, Molina M, Valle LJ, Vargas M, Gil AI, et al. High Frequency of Antimicrobial Drug Resistance of Diarrheagenic Escherichia coli in Infants in Peru. Am J Trop Med Hyg. 2009;81(2):296-301. doi:10.4269/ajtmh.2009.81.296.
https://doi.org/10.4269/ajtmh.2009.81.29... .

In recent years, the use of whole genome sequencing has been employed to characterize virulence genes of different DECs and to identify phylogenetic relationships between pathotypes 55. Noll LW, Worley JN, Yang X, Shridhar PB, Ludwig JB, Shi X, et al. Comparative genomics reveals differences in mobile virulence genes of Escherichia coli O103 pathotypes of bovine fecal origin. PLoS One. 2018;13(2):e0191362. doi: 10.1371/journal.pone.0191362.
https://doi.org/10.1371/journal.pone.019... . Since this aspect has been little explored in Peru, the aim of this research is to describe the characteristics of the resistome and comparative genomics of different DECs from the city of Lima.

Motivation for the study: There has been an increase in gastrointestinal infections by antibiotic-resistant diarrheagenic Escherichia coli (DEC) in recent years, whose genomic characterization has been scarcely researched in Peru.

Main findings: The pathotypes of DEC from Lima, Peru, with determinants of resistance to beta-lactams and quinolones are diverse, both molecularly and phylogenetically.

Implications: Genome sequencing allows a deep understanding of the continuous changes and adaptations that pathogens like DEC undergo, so its implementation would be important for the surveillance of antimicrobial resistance in Peru.

We worked on 14 E. coli isolates that caused acute diarrhea in patients from Lima between 2017 and 2018. The isolates were recovered by the Instituto Nacional de Salud (INS). The selection criteria were based on the antimicrobial sensitivity profile by diffusion disc previously evaluated by the laboratory (Appendix 1).

The isolates were reactivated in tryptic soybean broth (Merck, Germany) at 37 °C for 68 hours. Subsequently, they were seeded in MacConkey (Merck, Germany) agar plates and incubated at 37 °C for 18 to 24 hours. Confirmation of E. coli was made with conventional biochemical tests. The pathotypes were characterized based on primers according to Appendix 2.

The BLAST tool was used to search for the genes associated with the virulence of E. coli pathotypes, according to Appendix 2. Prediction of coding sequences was made using the program Prodigal v2.6.3. The homologous genes of the sequences were identified from a gene library built using all the complete genomes available in GenBank, and the BLAST algorithm to select the alignments greater than 90% for identity and greater than 60% for coverage than the reference. The code used for the annotation is available at http://github.com/OrsonMM/Blast-score-for-genomics.

The sequencing error rate of 0.35% was calculated using a PhiX internal control. The Q30 used to select good quality readings was >80% per 150 bp. The fourteen genomes sequenced had an average of 184 high quality contigs. Each genome was identified as E. coli with more than 85% identity, obtaining a GC-content of 50.4%. Ten different STs were detected by MLST (Figure 2), the main findings were that ST11 was associated to EHEC, ST311 to EIEC and ST69 to EPEC.

Thumbnail
Figure 2
Minimum spanning tree of 14 allelic profiles of the multilocus sequence typing (MLST) of the diarrheagenic Escherichia coli included in this study, according to Achtman and designed with the BioNumerics v7.5 program. The caption indicates each sequence differentiated by color. Each circle represents a genotype of the MLST, and the size is proportional to the number of strains included in each one.

The in silico pathotype analysis found a direct relationship with the results obtained by PCR (Figure 1). The EHEC isolates presented the Shiga toxin genes (stx1 and stx2). Four EHECs presented the heat-labile enterotoxin gene (elt), two presented heat-stable enterotoxins (st) and only one presented both genes. The annotation revealed the presence of the eaeA gene in the EPECs, and the IEECs carried the ipaH gene.

Thumbnail
Figure 1
Molecular identification of genes associated to pathotypes, phylogroups and antimicrobial resistance genes diarrheagenic of Escherichia coli. The colored boxes indicate the detection of the markers, the colorless boxes indicate their absence.

Clermont’s typing scheme assigned four E. coli genomes to phylogroup A, four to B1, one to B2, three to D, and two to E. Further review revealed that Peruvian EHEC isolates belonged to phylogroup E, EIECs to B1, ETECs to A and D, and EPECs to phylogroups B1, B2, and C (Figure 1).

During the resistome analysis we detected genes encoding beta-lactamases: nine genomes presented the ampC gene; four presented bla TEM1, and only one presented bla CTX-M-15. In addition, genes related to resistance to quinolones were detected. The S83L mutation of the gyrA gene was detected in two ETECs. The qnrS1 gene was found in all EIECs and one ETEC, while the qnrB10 gene was found in one EPEC (Figure 1).

Pan-genomic functional analysis detected 2.17% of core genes, 2.04% of accessory genes and 1.63% of unique genes related to antimicrobial resistance using the categories of the Kyoto Encyclopedia of Genes and Genomes (KEGG) (Appendix 3). In addition, annotation using the database of Clusters of Orthologous Groups of proteins (COGs) categories detected that 5.32% of the core genes, 7.32% of the accessory genes, and 10.22% of the single genes were related to cell wall and membrane proteins (Appendix 4).

Comparative genomics between pathotypes revealed 2,950 genes from the central genome. Additional data on the grouping of two or three pathotypes are detailed in Figure 3. Finally, we detected a large number of ortho-genes between EHEC and EIEC isolates, as well as a small number of genes shared within EPEC and ETEC, for which there is no additional information on their name or function, being noted as hypothetical proteins.

Resistance to quinolones by the S83L mutation in gyrA was observed in two ETCEs, while the presence of qnr in two EIECs, one EPEC and one ETEC. Quinolone resistance has already been reported in Peru, including commensal strains due to the strong influence of persistent exposure to these antimicrobials 1717. Pons MJ, Mosquito S, Ochoa TJ, Vargas M, Molina M, Lluque A, et al. Niveles de resistencia a quinolonas y otros antimicrobianos en cepas de Escherichia coli comensales en niños de la zona periurbana de Lima, Perú. Rev Peru Med Exp Salud Publica. 2012;29(1):82-6.; however, few studies focused on the use of molecular markers to determine quinolone resistance. Furthermore, genomic sequencing has led to the discovery of additional genes related to resistance to other antibiotics. For example, two EIECs and two EPECs with STX resistance and nine isolates with tetracycline resistance have been reported.

Pan-genomic analysis of diarrheagenic E. coli using KEGG categories allowed us to detect 2.17% of the genes (from the central genome) that are involved in antimicrobial resistance. Although the previous analysis only showed information regarding 14 genes associated with resistance, we were able to detect additional resistance-associated genes (among mutations and other effectors); however, due to the little information available regarding these genes in E. coli isolates, we did not study those molecules in depth.

The comparative analysis between pathotypes showed that EHEC and EIEC share a large number of genes (n = 246), while EPEC and ETEC had the lowest number of shared genes (n = 2). The latter result is interesting, since it contrasts with the work done by Hazen et al. 1818. Hazen TH, Daugherty SC, Shetty AC, Nataro JP, Rasko DA. Transcriptional Variation of Diverse Enteropathogenic Escherichia coli Isolates under Virulence-Inducing Conditions. mSystems. 2017;2(4):e00024-17. doi:10.1128/mSystems.00024-17.
https://doi.org/10.1128/mSystems.00024-1... , who found hybrid isolations of these pathotypes. On the contrary, most comparative genome studies are only based on the analysis of differences and similarities within the same pathotypes, so our research offers a first look at comparative genomes between different pathotypes and is one of the first studies on this subject in Peru.

In conclusion, the isolates of diarrheagenic E. coli from Lima, Peru, have resistance genes for several drugs. We detected pathotypes, ST and phylogroups with molecular and phylogenetic diversity. We suggest to continue monitoring the antimicrobial resistance of these bacteria with modern sequencing techniques, since this information is useful for local public health.

All authors declare that they have no conflict of interest regarding this publication.

Thumbnail
Figure 2
Minimum spanning tree of 14 allelic profiles of the multilocus sequence typing (MLST) of the diarrheagenic Escherichia coli included in this study, according to Achtman and designed with the BioNumerics v7.5 program. The caption indicates each sequence differentiated by color. Each circle represents a genotype of the MLST, and the size is proportional to the number of strains included in each one.
Thumbnail
Figure 1
Molecular identification of genes associated to pathotypes, phylogroups and antimicrobial resistance genes diarrheagenic of Escherichia coli. The colored boxes indicate the detection of the markers, the colorless boxes indicate their absence.
Thumbnail
Figure 3
Comparative genomics of Escherichia coli pathotypes. The central intersection indicates the genes shared by the four pathotypes (central genome).
Thumbnail
Table 1
Genomic data of diarrheagenic Escherichia coli isolates in Lima, Peru.

Figure 2   Minimum spanning tree of 14 allelic profiles of the multilocus sequence typing (MLST) of the diarrheagenic Escherichia coli included in this study, according to Achtman and designed with the BioNumerics v7.5 program. The caption indicates each sequence differentiated by color. Each circle represents a genotype of the MLST, and the size is proportional to the number of strains included in each one. 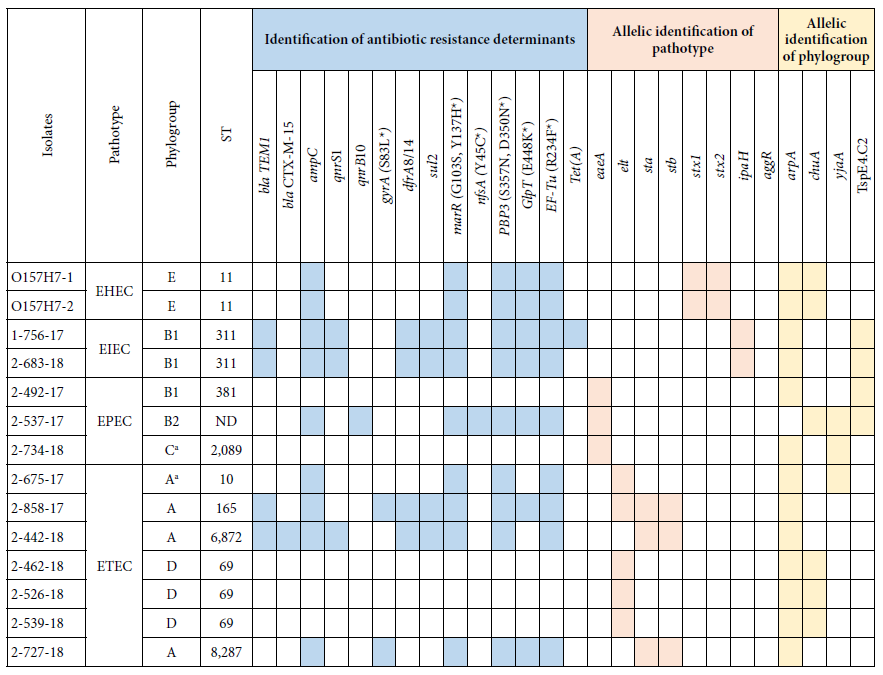 Figure 1   Molecular identification of genes associated to pathotypes, phylogroups and antimicrobial resistance genes diarrheagenic of Escherichia coli. The colored boxes indicate the detection of the markers, the colorless boxes indicate their absence. 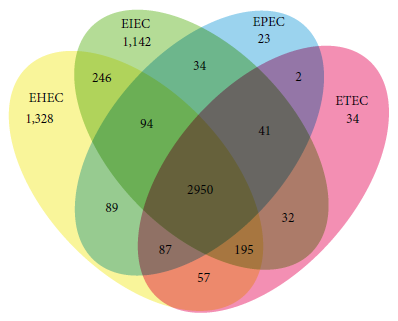 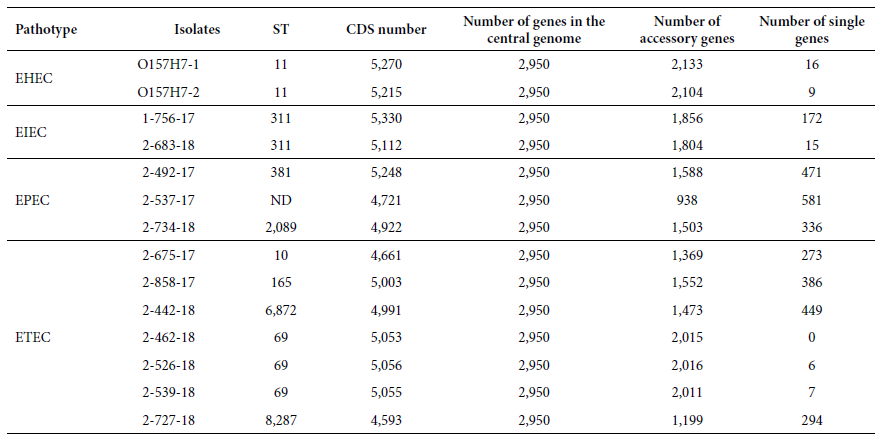