Lethal encephalitis due to free-living amoebae in three members of a family, in Tumbes, Peru

Free-living amoebas (FLA) are protozoan parasites that occasionally cause disease in humans after contact with contaminated water or soil. We describe a series of three cases of encephalitis in a family group with a fatal outcome that occurred in the Tumbes region between December 2019 and February 2020. Acanthamoeba sp. was identified in the cerebrospinal fluid sample from case 1. All three cases had a history of entering a swimming pool months before the disease. In the Tumbes region there is no previous record of encephalitis due to FLA and its occurrence in a family cluster has never been reported before.

FLA have a worldwide distribution. In South America, cases of Acanthamoeba and B. mandrillaris have been described in immunocompromised patients. In Peru, since 1970, cases of GAE have been found in the coast (Piura, Lima, and Ica), related to B. mandrillaris1010. Cabello-Vílchez AM. Balamuthia mandrillaris en el Perú, lesiones cutáneas, meningoencefalitis y métodos de cultivo. Infectio. 2016;20(2):107-19. doi: 10.1016/j.infect.2015.10.006.
https://doi.org/10.1016/j.infect.2015.10... . In Tumbes, there are no previous report of cases of FLA disease, and no reports of an outbreak of FLA encephalitis in a family cluster have been found in the literature.

This study presents a series of three cases of lethal encephalitis by Acanthamoeba in a nuclear family in Tumbes, Peru.

Motivation for the study: Free-living amoebae are protozoan parasites that occasionally cause disease in humans.

Main findings: The characteristics of an outbreak of encephalitis due to free-living amoebae in three members of a family in Tumbes with fatal outcome.

Implications: Permanent surveillance of water quality by the health authorities and the monitoring of public swimming pools are recommended.

Tumbes is located on the northern coast of Peru (3°34’0 “S, 80°26’29 “W) and has a semitropical climate with an average temperature of 25.3 °C. However, when El Niño phenomenon occurs, temperatures reach 40 °C with heavy rainfall and flooding. The socioenvironmental and sanitary conditions of the region favor the presence of tropical diseases.

The National Center for Epidemiology, Disease Control and Prevention (CDC) was notified of a case of febrile syndrome with neurological manifestations in a one-year-old boy, with history of a father and brother who had died in the previous months with diagnosis of encephalitis.

The information was obtained from medical records; the relatives of the deceased were interviewed to look for history of exposure. Diagnoses compatible with encephalitis, febrile syndrome, and convulsions were sought in the outpatient, emergency, and hospitalization databases of local health facilities and hospitals. The health facility in the jurisdiction conducted a community case search. The case definition used was a person who in the last six months had presented headache and neurological manifestations characterized by altered consciousness, with or without fever, with a history of previous exposure to stagnant water, swimming pools or ponds in Tumbes.

The data for this investigation were obtained from an outbreak investigation conducted by the CDC of Peru. A timeline was constructed for the description and temporality of the cases (Figure 1).

Thumbnail
Figure 1
Timeline of cases. Lethal encephalitis due to free-living amoebae in three members of a family, in Tumbes, Peru.

Description of the cases

During 2019 and 2020, three cases of FLA lethal encephalitis occurred within a family in Tumbes, Peru. The nuclear family was father, mother, and two sons aged six and one year.

The first case was a boy aged one year and seven months with history of prematurity (28 weeks, weight 1,800 g); on January 28, 2020, he had fever (40 °C), muscle weakness of upper and lower limbs, cough, and generalized tonic-clonic convulsions. He was treated at a local hospital and had the following laboratory results: hemoglobin, 9.4 g/dL; negative serological test for dengue, leptospirosis, and blood parasites (thick blood smear). Due to information about his relatives, who died in the previous weeks with a diagnosis of encephalitis, the patient was referred to more complex hospitals in Piura and Lambayeque, where he received anticonvulsants, antibiotic therapy for suspected bacterial meningoencephalitis, and abolition of osteotendinous reflexes. The result of the computed axial tomography showed cerebral edema; lumbar puncture was not performed due to lack of reagents. The clinical picture did not improve, and the patient died seven days after the onset of symptoms. Informed consent was obtained to obtain a postmortem cerebrospinal fluid (CSF) sample, which was sent to the Instituto Nacional de Salud (INS) where Acanthamoeba sp. trophozoites were reported.

The second case was a 28-year-old adult, father of the other cases. He had a history of repeated urinary tract infections (UTI) which were treated with self-medication. In October 2019, he experienced generalized weakness, myalgias, diffuse headache, and forgetfulness episodes. The patient did not seek medical attention because his son, the third case in our series, was hospitalized. On January 18, 2020, he attended the local hospital with unquantified fever, severe headache, drowsiness, and severe adynamia. On examination he was found to be bradypsychic and areflexic. On January 19, 2020, he was referred to a hospital in Piura diagnosed with encephalitis; he stayed one day and then his family members took him to a more complex hospital, where a lumbar puncture was carried out and showed hematic CSF, he was diagnosed with liver failure and encephalitis, and died one day later at home.

The third case was a six-year-old boy, with history of seizures from the age of six months to three years. In October 2019 he presented severe headache radiating to the back, dizziness, and insomnia. He was evaluated at the local health facility, where he received analgesics. The patient had a “fixed gaze”, unsteadiness, loss of muscle tone and temporary unconsciousness. On November 8, 2019, he had fever (39-40 °C), intensified headache, incoherent speech, ataxia, loss of strength in lower limbs, right eye deviation and seizures. He was evaluated at the local hospital, where dysarthria and left hemiparesis were found; he was presumptively diagnosed with malignant brain tumor. On November 9, 2019, he was hospitalized and received treatment for autoimmune encephalitis. During hospitalization, he was also diagnosed with healthcare-associated infection. He died in December 2019. No additional examinations were conducted, and no necropsies were carried out for any of the cases.

The patients had not traveled in recent years and had not had contact with sick people or animals. Their home had water and indoor sewage. Cutaneous mycosis in the left malar region was reported in case 3 and tinea capitis in case 2. A visit to a public swimming pool was reported in September 2019, where only the three cases entered the pool. The institutional and community search did not find similar diagnoses or people who met the case definition.

The private swimming pool is located 15 minutes by car from the locality of the cases’ residence and has four concrete pools with no water circulation system or operating license. The employees were unaware of any pool treatment methods.

This study presents three cases of encephalitis by FLA with fatal outcome in a family cluster in the department of Tumbes, with exposure to public swimming pools. This is the first report of a family cluster diagnosed with encephalitis by FLA in Peru; to our knowledge, an outbreak of these characteristics had not been reported anywhere in the world.

The possibility of diagnosing encephalitis by FLA is limited in Peru. Tumbes does not have laboratories or personnel with diagnostic capacity. The most effective approach at the moment is to take samples and send them to the few specialized laboratories in the country.

Several medications had successful results in some patients; but there is no consensus regarding the medications for GAE by Acanthamoeba, so combinations of 4 and 5 antibiotics are recommended, where the most effective are miltefosine, azoles, pentamidine and cotrimoxazole 1515. Mendiola J, Fresco Y, Rodríguez M. Encefalitis por amebas de vida libre: herramientas actuales para el diagnóstico y tratamiento tempranosdiagnóstico y tratamiento tempranos. Rev Cubana Med Trop [Internet]. 2020;72(3). e490.. It is also recommended to start antimicrobial treatment as soon as possible; however, an effective treatment for infections has not been established, since the best method of drug administration to the central nervous system (CNS), the pathophysiological mechanisms, the role of environmental conditions and the individual’s genetics, as well as the immune response, are still unclear.

The main limitation of this study was the non-confirmation of Acanthamoeba in the second and third cases. In all of them there was a history of exposure to a swimming pool months before the disease. Due to the temporality of the exposure, Acanthamoeba can be related to all of them. Data regarding the clinical picture and chronology of the manifestations were obtained from interviews with relatives and may have temporal variation.

Postmortem sampling allowed the etiological diagnosis and the implementation of temporary sanitary and environmental control measures in public swimming pools in Tumbes.

In conclusion, this study describes an outbreak of encephalitis by FLA in three members of a family in Tumbes with fatal outcome. The exhaustive interrogation and rapid identification of the causal agent was essential, so encephalitis by FLA should be considered as a differential diagnosis in areas with conditions that favor its presence. It is a challenge to identify the causal agent with the usual methods available in Peru.

Permanent surveillance of water quality by health authorities and monitoring of public swimming pools are recommended. The authorized operation of swimming pools should be supervised, guaranteeing the use of disinfection, circulation, and water recirculation systems, as well as strengthening health education in the population.

To the staff of the Epidemiology Directorate of DIRESA Tumbes and EsSalud for their support in the investigation of the cases.

MESC conceived and designed the article; collected the results; analyzed and interpreted the data; drafted the article; made a critical revision of the article; approved its final version; acquired the study material.

The author declares that she has no conflicts of interest.

Thumbnail
Figure 1
Timeline of cases. Lethal encephalitis due to free-living amoebae in three members of a family, in Tumbes, Peru.

Figure 1   Timeline of cases. Lethal encephalitis due to free-living amoebae in three members of a family, in Tumbes, Peru. 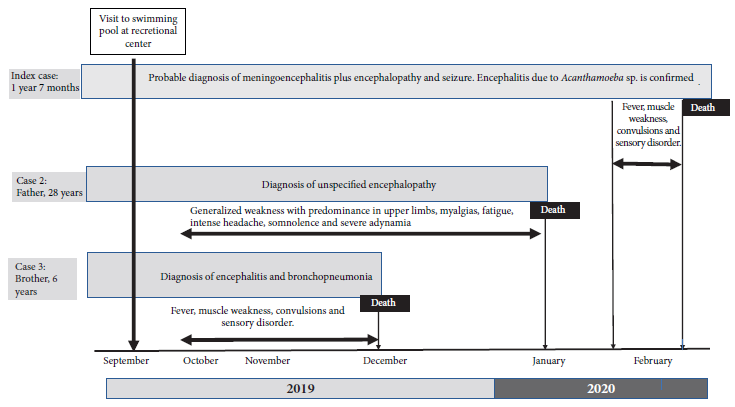