Cutaneous tuberculosis is a rare presentation of Mycobacterium tuberculosis infection. We present the case of a woman without important medical history, with a disease period of one year and a half, characterized by sporotrichoid-like lesions, with lymphocutaneous dissemination in the right upper limb, and with slowly progressive evolution. The histopathological tests revealed Langhans type giant cells and scarce necrosis. The patient received therapy with a sensitive antituberculous scheme, and evolved favorably.

We present the case of a 14-year-old female patient from the city of Iquitos, in the Peruvian Amazon, with no medical history, no loss of appetite, and no weight loss or nocturnal temperature increase. She had 18 months of illness before hospital admission. The main symptom was an increase in volume on the dorsum of the right hand, initially painless, which progressed from a nodular lesion to an ulcerated lesion, to later develop an apparently lymphatic dissemination throughout the right upper extremity, without other accompanying symptoms. She attended the outpatient service of the dermatology department of the Regional Hospital of Loreto. She did not report contact or recent travel, neither any injury risk factors associated with the onset of signs and symptoms. She had no previous history of tuberculosis or use of immunosuppressant drugs, nor did she report any close or family contact with patients infected with tuberculosis. The patient mentioned that she went to a private clinic without a successful outcome, she did not disclose the treatment received. She did not undergo immunological tests for tuberculosis such as Mantoux test or QuantiFERON Gold test.

During physical examination, a lesion with erythematous, soft bottom extending over the dorsum of the hand was found on the inner side of the right arm. Serosanguinous secretion was observed after incision. In addition, there was evidence of ulcers with raised, crusty and everted edges with presence of granulation tissue at the base (Figure 1). No regional lymphadenopathy was found by palpation, only a scrofuloderma lesion was evidenced in the right armpit.

Three weeks after the intervention, a violaceous nodular lesion of 22 x 22 mm in diameter was observed on the inner side of the arm of the affected limb; after another three weeks, the primary nodule formed an ulcer with seropurulent secretion. Subsequently, new lesions of similar characteristics developed in the same area of the arm, with linear course throughout the limb, with periods of 2 to 3 weeks between them; one of them appeared on the wrist and others laterally. After one year, another one appeared on the inner elbow. Overall, there were ten cutaneous lesions with lymphocutaneous spread over the entire right upper extremity.

The patient received antibiotic and antifungal treatment without any improvement. Routine hemogram and biochemical tests were normal. Indirect immunofluorescence test for leishmaniasis was performed, with negative results. In addition, the chest X-ray did not show any alteration. Potassium hydroxide examination of the skin lesions and cultures for bacterial and fungal microorganisms were negative. The biopsy report (Figure 2) revealed a sample of epidermis with irregular and papillomatous acanthosis. The report showed superficial and deep dermis with abundant granulomatous inflammatory infiltrate with presence of macrophages, lymphocytes, and plasma cells. Langhans type giant cells and scarce necrosis were present. Ziehl-Neelsen staining was negative, Giemsa staining was not contributory. Histopathological findings were consistent with cutaneous tuberculosis.

Currently the patient continues to receive antituberculosis therapy and with apparent resolution of the lesions.

One of the limitations of this report is that molecular tests for the identification of Mycobacterium tuberculosis were not performed, nor immunological tests such as the Mantoux test or the QuantiFERON Gold test. These tests were not available at the Regional Hospital of Loreto. In addition, no cultures were performed by the tuberculosis program of the hospital.

In conclusion, the clinical presentation of cutaneous tuberculosis should be considered during the differential diagnosis of sporotrichosis-like skin lesions, especially in patients with no antibiotic or antifungal response, and in areas with a high incidence of tuberculosis.

all authors participated in the study concept and design, data interpretation, drafting and critical revision of the article, and approval of the final version.

no conflicts of interest were declared. 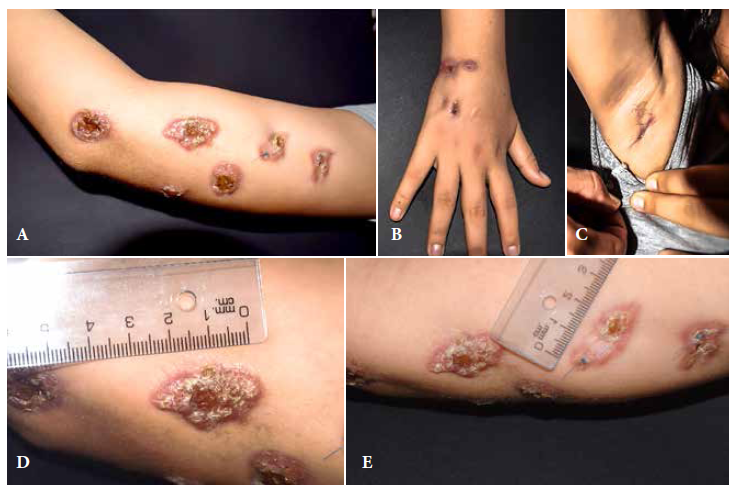 Figure 2   Skin biopsy of the lesion in the anteromedial region of the right arm. A. Ulcerous bed, and area of reactive epidermis. B. Ulcerous bed with extensive necrosis, extension to deep dermis. C. Ulcerous bed, presence of granulomas (g), giant multinucleated cell (GMN). 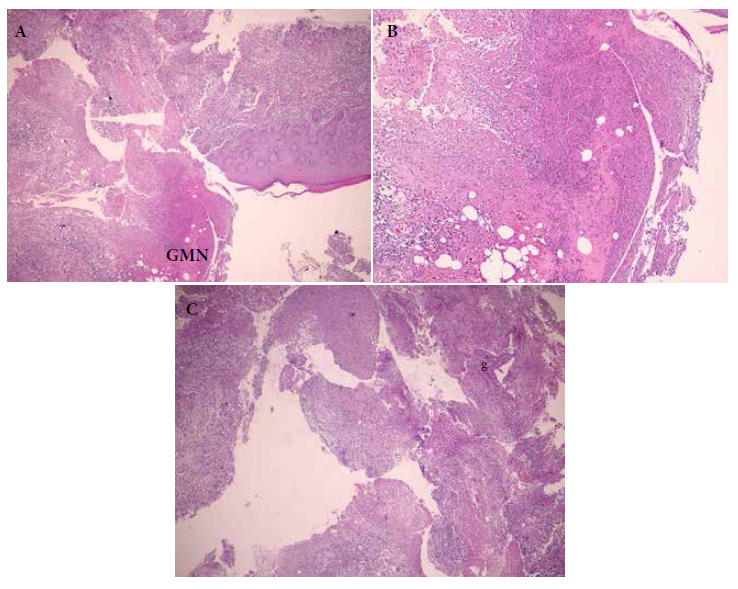