The United States of America and Mexico share a 3 326-km border and, consequently, many public health problems, with AIDS being prominent among them. As of June 30, 1996, the U.S. had reported a total of 548 000 AIDS cases; by October of that same year, Mexico had reported 28 776, the third highest total of any country in the Western hemisphere (1, 2). Both countries report a significant number of cases along the shared border. The four border states of the U.S. have had 137 097 cases and the six border states of Mexico, 3 460 cases (1, and Luis Anaya, Registro Nacional de Casos de SIDA, personal communication, 15 January 1997). The U.S. border states saw a tripling of the number of cases from 1990 to 1996, while cases in the Mexican border states increased by nearly five-fold during the same years (3, 4). Among AIDS cases reported in the U.S., over 17% have been in Hispanic individuals (1). In Texas, a border state that had reported 37 320 AIDS cases as of mid-1996, 17% of patients have been Hispanics (5), and most of them probably had Mexican backgrounds. According to the 1990 census, nearly 90% of Texas Hispanics trace their ancestry to Mexico (6).

A previous study showed that Hispanics in Texas seek and receive much of their medical care from clinicians who are of Hispanic descent (7). Based on these findings, it is likely that Hispanics with human immunodeficiency virus (HIV) infection or AIDS would also prefer to receive care from Hispanic care providers. The present study was undertaken to ascertain the extent to which Hispanic caregivers along one stretch of the border provide care for patients with HIV/AIDS; the barriers to their providing such care; and their educational needs with respect to HIV/AIDS.

A survey was conducted among Hispanic clinicians in Texas, USA, and the Monterrey area of Nuevo Leon, Mexico. The survey elicited data on the respondents' 1) personal characteristics and medical practice, including HIV caseload and current practices with regard to HIV prevention and education; 2) self-assessed knowledge about HIV/AIDS and available treatments and sources of information about the problem; 3) willingness to provide care to HIV/AIDS patients and perceived barriers to providing such care; and 4) perception as to whether or not Hispanic patients have special needs with regard to HIV/AIDS.

The study was inaugurated in Texas as part of continuing education training assessments carried out by the AIDS Education and Training Center (AETC) for Texas and Oklahoma. One of the authors (JLM) arranged interviews with Hispanic physicians of his acquaintance in the Houston area. These physicians were then asked to recommend Hispanic colleagues who might be willing to submit to an interview.

Forty clinicians were interviewed in their practice settings, using a standard questionnaire. Previous experience has shown that face-to-face interviews yield a much richer assessment of educational needs than mail surveys. The interviews were conducted primarily in English, but Spanish was used as cued by the respondent.

Because the AETC has responsibility for all of Texas, a mailing list of Hispanic physicians in the state was obtained from the Inter-American College of Physicians and Surgeons. Ninety of these physicians were sent English language questionnaires. Thirty-four responded and were included in the study.

The Mexican portion of the study began with the Mexican co-author (JdDLS) interviewing physicians of his acquaintance who practiced in the Monterrey area of Nuevo Leon, where more than 85% of Nuevo Leon clinicians have their practice. These physicians provided leads to colleagues, some of whom participated in the study. All interviews were conducted in the physicians' normal practice settings, using a Spanish translation of the questionnaire applied in Texas. The questionnaire was modified slightly for the Mexican context.

All data were collected between December 1994 and April 1996. A preliminary analysis found no significant differences between the Houston area clinicians' responses and those of the Texas clinicians interviewed by mail. Therefore, subsequent analyses considered two groups: clinicians from Texas and from Nuevo Leon.

Characteristics of respondents and their medical practices

Overall, the respondents were a mature, experienced group of active clinicians. As shown in Table 1, the majority were over 40 years of age. Fifty-two percent in Texas and 82% in Nuevo Leon had finished their last residency training more than 10 years before. Over 80% saw in excess of 1000 patients a year. Most were primary care physicians in either family or general practice or internal medicine (54% in Texas and 73% in Nuevo Leon). The remainder had a variety of specialties, including obstetrics and gynecology, oncology, dermatology, urology, dentistry, and surgery. Almost all physicians in Nuevo Leon (95%) attended medical school in Mexico. Of physicians in Texas, around 40% received their primary clinical education in the U.S.; 20% trained in Mexico; and the remainder trained in a variety of countries. Most Texas respondents were in private practice (55%) or worked in public clinics (28%). The majority of physicians in Nuevo Leon reported being in private practice (73%). As is usually the case in Mexico, many members of this group also held salaried positions in public clinics.In summary, although survey respondents were not a random sample of physicians from the two states, they represent a diverse group of senior, clinically active physicians from a number of different backgrounds and specialties. 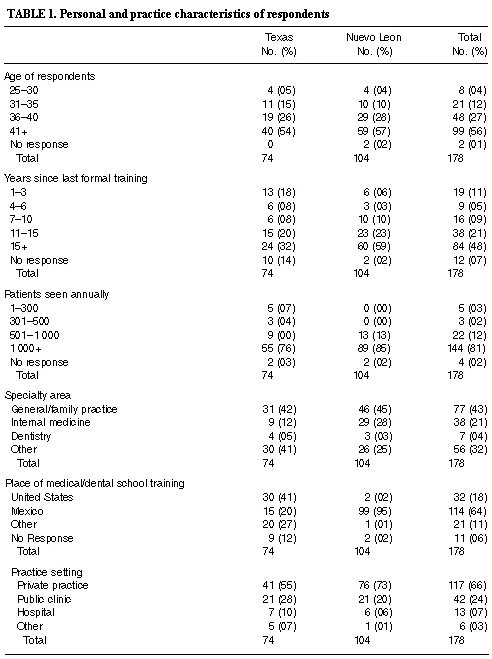 Practice characteristics as related to HIV/AIDS 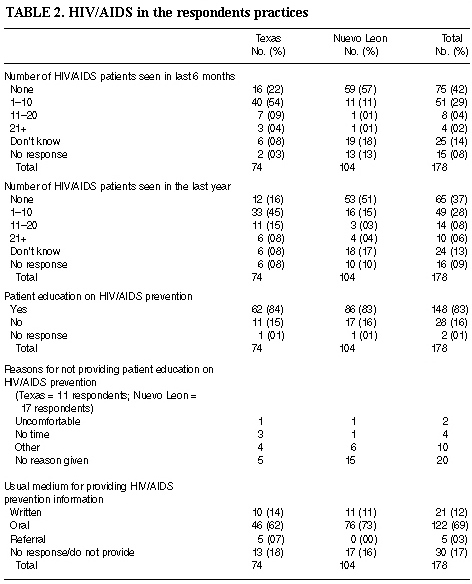 Interestingly, 8% of the clinicians in Texas and 17% of those in Nuevo Leon could not say whether or not they had seen an HIV patient in the previous year. Nevertheless, most survey respondents seemed to be aware of the threat that HIV presents to their patients. Over 80% in each setting provided HIV prevention education to patients whom they deemed to be at risk for infection. Among those who did not educate their patients in HIV prevention, a few said that doing so would make them feel uncomfortable or take too long, while most offered no reason. Among those who did provide HIV prevention information to their patients (84% in Texas and 83% in Nuevo Leon), most did so orally.

When taken as a group, the clinicians in this study were either not seeing many HIV infected patients or were failing to recognize the condition. It was also surprising, given the epidemiology of AIDS in the two countries, that one-sixth of all physicians surveyed still did not incorporate HIV prevention messages into their practices.

Knowledge with respect to HIV/AIDS

The respondents were asked to rate their own knowledge of HIV/AIDS. Nearly 80% of those in Texas and over 90% of those in Nuevo Leon rated their knowledge as average or above average, as shown in Table 3. However, when asked to rate their knowledge of HIV/AIDS treatments and guidelines, nearly half from both areas (43% in Texas and 48% in Nuevo Leon) rated themselves below average. As a test of specific knowledge of HIV/ AIDS, the Texas mail questionnaire asked whether respondents were familiar with ACTG 076, the clinical trial which showed that administration of zidovudine to HIV-infected pregnant women and their newborns can reduce HIV transmission from mother to fetus by two-thirds (8). Four out of 34 (12%) indicated that they were familiar with the study. The same clinicians were also asked if they were familiar with Texas laws regarding HIV testing of pregnant women, and three (9%) gave affirmative responses. 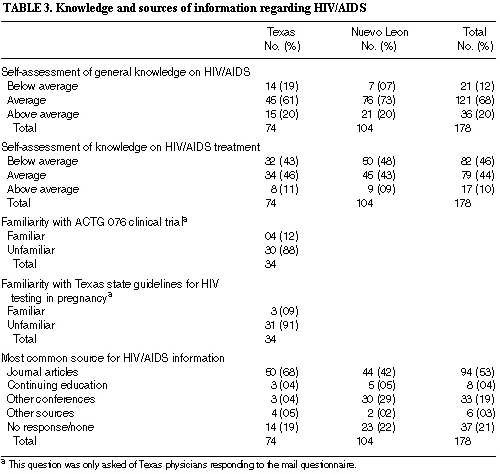 About 68% of physicians in Texas and 42% of those in Nuevo Leon said they relied on medical journals for their information about HIV/AIDS. An additional 4% of Texan clinicians and 29% of those from Nuevo Leon kept up with developments in the field of HIV/AIDS through attending conferences. Surprisingly, less than 5% of the respondents in either area attended university-based continuing education programs to obtain information about HIV infection.

A substantial majority of respondents (82% in Texas and 75% in Nuevo Leon) said that they were willing to see patients with HIV/AIDS, as seen in Table 4. Conversely, however, 16% of clinicians from Texas and 24% of those from Nuevo Leon were unwilling to care for such patients. 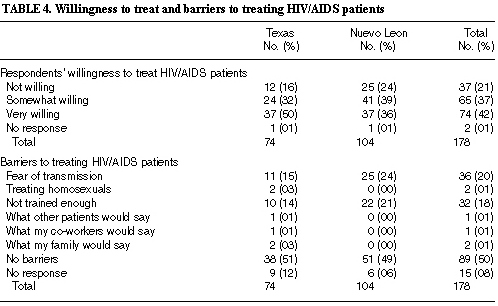 Half of the physicians in both states (51% in Texas and 49% in Nuevo Leon) denied experiencing any barriers to treating patients with HIV/AIDS. Fear of becoming personally infected was the barrier most often cited (15% of clinicians from Texas and 24% of clinicians from Nuevo Leon). Among physicians perceiving barriers, 14% of those in Texas and 21% of those in Mexico felt they lacked the skills to treat HIV infected patients.

The vast majority (79%) of the respondents felt Hispanic patients with HIV/AIDS have special needs, but Texan and Mexican physicians construed these needs differently. As shown in Table 5, 64% percent of Texan clinicians but only 37% of Mexican clinicians reported feeling that the most important special need was to be sensitive to Hispanic culture and traditions. The difference seems to reflect the fact that HIV/AIDS patients in Nuevo Leon are already being cared for within their own cultural setting. The need for cultural sensitivity is more strongly felt in Texas, where Hispanic culture and customs are not dominant. A large proportion of the respondents in both states (82% in Texas and 75% in Nuevo Leon) said they were willing to attend training on the psychosocial aspects of HIV/AIDS. 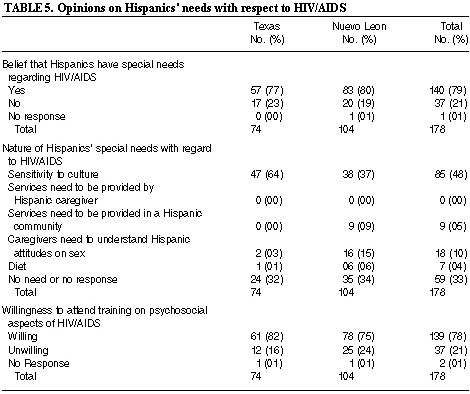 Effect of age on clinicians' responses

Most clinicians in this study received their primary medical education prior to the recognition of AIDS in the early eighties. Therefore, clinicians over 40 years of age were compared with those under 40 to determine if their differing exposures to HIV/AIDS during their years of formal education might have resulted in differences in self-assessed knowledge about the disease. No important differences were found. (Data not shown.)

This study was not a random survey, and its results should not be extrapolated to all clinicians in the border area. However, the respondents hail from a broad range of specialties and types of practices. Their responses provide suggestive insights into the level of HIV/AIDS-related knowledge among physicians in Texas and in Nuevo Leon.

The survey results revealed a serious lack of knowledge about HIV/AIDS among a substantial proportion of respondents. They also showed that the majority of a group of actively practicing, mainly primary care physicians considered themselves as having below average knowledge about HIV/AIDS treatment and guidelines. The Texas clinicians were unfamiliar with the study that showed how to prevent transmission of HIV from mother to child during pregnancy. One-sixth of all survey respondents failed to include patient education on HIV prevention in their practices, despite the fact that a majority of Texan clinicians and nearly one-fourth of those from Nuevo Leon had seen at least one HIV/AIDS patient in the course of the previous year.

The findings reported in this study are troubling. First, physicians acknowledged having little knowledge and omitting patient education about HIV prevention at a time when the AIDS epidemic is escalating in the border area. Second, recently trained clinicians did not report feeling more knowledgeable about HIV/AIDS than their older colleagues. Third, nearly one-quarter of the respondents from Nuevo Leon and one-sixth of respondents from Texas regarded their personal risk of HIV infection as an important barrier to providing care to HIV/AIDS patients. Policymakers should take note of these findings, which strongly suggest that Hispanic patients in Texas and Nuevo Leon are not receiving optimal and culturally-sensitive clinical care.

Clearly, there is a need for a major educational program aimed at physicians in both Texas and Nuevo Leon. It is also evident that university-based continuing education programs have been minimally effective to date. Different educational mechanisms are necessary. Mexican physicians have expressed a preference for on-site educational programs, a strategy that could be fruitfully extended to Texas clinicians. Trans-border educational initiatives based on reciprocity should also be explored. Texas clinicians could share their broader clinical experience of HIV/AIDS with their Mexican colleagues. In turn, Mexican clinicians could provide their Texas colleagues with a deeper understanding of Mexican culture as is relevant to the treatment and support of Hispanic patients with HIV/AIDS. The problem of HIV/AIDS does not stop at the border, and neither should clinician education.

Acknowledgments. This study was supported in part by the HIV/AIDS Bureau (HAB), Health Resources and Services Administration (HRSA), U.S. Public Health Service, under cooperative agreement #2U69PE00116-06. All representations are the sole responsibility of the authors and not of the HAB or HRSA.

6. United States Department of Commerce, Bureau of the Census. 1990 Census of population, general population characteristics of the State of Texas. Washington, D.C.: USDC; 1992.