OBJECTIVE: To determine the trends in hospital admission rates for colorectal cancer (CRC) in the Brazilian Public Health System from 1996 to 2008 and to assess the economic costs.
METHODS: Data from the Hospital Information Systems database of the Brazilian Unified Health System were used for analysis of all admissions with a primary diagnosis of CRC between 1996 and 2008.
RESULTS: There were 297 108 CRC admissions over the study period, with an annual increase from 12 821 in 1996 to 35 040 in 2008. Age-standardized admission rates increased from 8.7 to 23.56 per 100 000 for a percentage increase of 171%. The average length of stay decreased from 11.6 days in 1996 to 7.5 days in 2008. The average hospital mortality declined from 10.4% to 8.5%. Overall costs in United States dollars (US$) of CRC hospitalizations rose from US$ 16.5 million in 1996 to US$ 33.5 million in 2008; the average cost of each admission, however, decreased from US$ 1 283 to US$ 954.
CONCLUSIONS: Hospitalization rates for CRC in Brazil significantly increased during a 13-year period, incurring a considerable rise in the inflation-adjusted economic burden; national in-hospital mortality rates have remained relatively high.

Colorectal cancer (CRC) is the third most common malignancy in the world in both men and women and it is the fourth leading cause of cancer-related death. Incidence rates of CRC worldwide are remarkably variable. The highest rates are found in developed countries, including the United States, Canada, Australia, and the countries of northwestern Europe. A comparatively low rate is observed in Asian, African, and South America countries, although incidence rates are increasing in countries that were previously considered low incidence (1).

Unfortunately, there are few studies on the epidemiology of CRC in Latin America and, specifically, in Brazil. Nevertheless, current data indicate that the incidence of CRC and its related mortality has increased in the country in recent decades, especially in the more developed and industrialized regions (4-6). An average annual growth of 3.5% in CRC deaths was reported between 1979 and 2000, from 2.44 to 4.12 per 100 000 males and from 2.8 to 4.29 per 100 000 females (4).

In spite of progress in the medical and scientific fields, CRC concomitantly presents a significant economic burden worldwide. The economic impact of CRC in the United States was estimated to range between 5.5 billion and 6.5 billion United States dollars (US$) in 2000, with inpatient costs representing 80% of total direct costs (7).

Although a progressive incidence of CRC has been demonstrated in Brazil, it is unknown how the current strategy of population screening for an early diagnosis and the availability of new and more effective chemotherapeutic agents affect nationwide hospitalization patterns for CRC. In addition, there are no studies on inpatient direct costs related to this disease in the Brazilian Public Health System. It is essential to measure these costs in order to estimate the CRC economic burden at a national level. Therefore, the objectives of this study were to determine rates and recent trends of hospital admissions for CRC in the Brazilian Public Health System between 1996 and 2008 and to assess the direct economic costs resulting from these admissions.

All data were extracted from the Hospital Information Systems of the Brazilian Unified Health System (SIH-SUS), which is maintained by DATASUS, the national agency for health statistics. SIH-SUS is a public nationwide database that comprises almost 80% of all hospital admissions in Brazil (8); it is the only public nationwide source of information on hospital morbidity and mortality. SUS is a subsystem of the National Health Care System, which consists of all health care centers financed by public providers. Thus, data from the other subsystem (the supplementary medical system, which consists of health plans and private patients) were not computed.

Although the SIH-SUS database includes data since 1984, more accurate parameters for diagnosis registration were not introduced in hospital admission systems until 1995 (9); hence, only data registered after 1996 are included in this study. The following variables were evaluated: gender, age, overall costs, costs per episode of hospital admission, mean length of stay per admission, and number of in-hospital deaths.

The age-stratified hospitalization rates were calculated by dividing the number of hospital admissions due to CRC for each year and age group by the size of the corresponding Brazilian population in each age group, obtained from the 2000 Brazilian census of The Brazilian Institute of Geography and Statistics (10); the resulting rates were multiplied by 100 000 to obtain data expressed per 100 000 persons per year. Age-standardized hospitalization rates were calculated by the direct method using the world standard population (modified by Doll et al. [11]).

The direct economic costs related to CRC hospital admissions reported in this study are based on the amount that SUS pays for each hospitalization, including all the specific costs of a hospital stay, such as complementary examinations, interventions and surgical procedures, medications (e.g., chemotherapy), and professional fees. These values were adjusted monthly for inflation according to Brazil's official inflation index from January 1996 until December 2008. These data were then converted from national currency (Brazilian real, BRL) to US$ using the 2007 purchasing power parity (PPP) conversion factor to the official exchange rate ratio from the United Nations Statistics Division (12), which was the most recent available at the time of this writing. We assumed that the 2008 PPP conversion factor remained stable with respect to 2007 (1 PPP US$ = 1.6 BRL). Comparisons based on market exchange rates can lead to misinterpreted results because these rates are more susceptible to short-term variations and influences that often do not represent real long-term trends. PPP conversions, on the other hand, enable large equivalent economic comparisons across distinct countries (13).

All data were analyzed with SPSS 15 software (SPSS Inc., Chicago, United States of America). Data used for this study comprise all CRC admissions in the Brazilian Public Health System. Therefore, descriptive rather than inferential statistics were used in the analysis. Increasing or decreasing trends of admission rates over time were assessed by the absolute change in percentage of the studied variables.

This study was approved by the local Institutional Ethics Committee and was done in accordance with the Declaration of Helsinki of the World Medical Association. 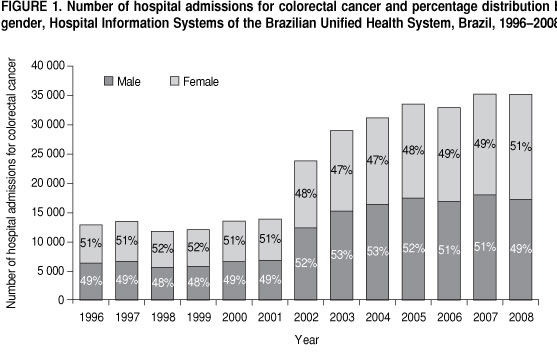 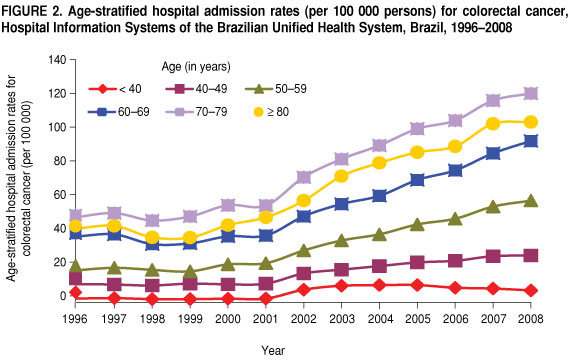 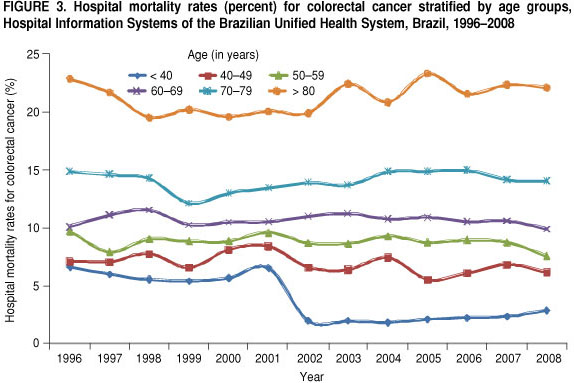 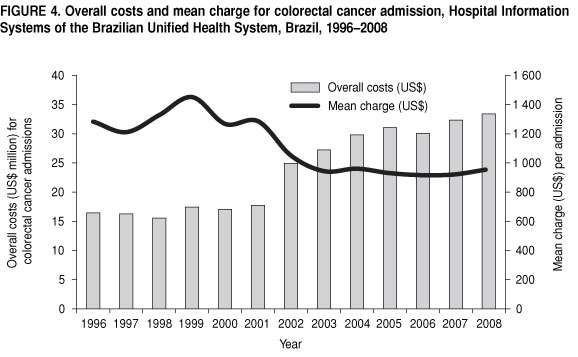 Colorectal cancer remains a major clinical and public health issue on a global scale. Currently, the highest incidence rates of CRC are observed in Europe, North America, and Oceania; the lowest rates are reported in Asia, Africa, and South America (14). In the United States, the incidence of CRC among men declined by 2.8% per year from 1998 to 2005 and among women it declined by 2.2% per year in the same period (15). By contrast, newly developed countries, such as the Czech Republic, have been presenting elevated and increasing incidence rates, probably due to "westernization" of the lifestyle in these countries (14).

In Brazil, the incidence of CRC varies remarkably among distinct geographic areas as a function of differences in socioeconomic patterns, risk factor exposure profiles, and availability of medical and economic resources (6). Likewise, mortality from CRC has been rising in Latin America (14, 16), although the mortality rates remained below 10 per 100 000 in most countries of the region until 2000 (16). Trends in CRC mortality are unfavorable in Brazil, mainly due to modifications in national dietary and lifestyle habits; the prevalence of obesity, for example, has increased significantly over the last 20 years in three nationwide surveys (17).

In contrast, in the United States, deaths due to CRC have declined almost 9% over a 15-year period (18, 19). Screening strategies, early detection, advances in prevention, and improved treatment with new chemotherapeutic regimens have resulted in an overall 5-year survival rate of 65.2% in that country. In Brazil, overall 5-year relative survival rates of 33.1% in men and 32.7% in women with CRC were found according to a worldwide population-based study (20).

To the best of our knowledge, this is the first study to show an increase in hospitalization rates for CRC in the Brazilian Public Health System. On the other hand, according to data from the US Agency for Healthcare Research and Quality, there were almost 571 700 hospitalizations in 2006 related to CRC in the United States (191.4 per 100 000 persons), of which about one-quarter (151 900) had a principal diagnosis of CRC (50.8 per 100 000 persons) (21). In addition, the rate of hospital admissions for CRC decreased almost 15% between 1995 and 2006 in that country (21). Although these numbers cannot be compared in absolute terms because of the different methodologies used in each study, they provide important parameters to illustrate different trends in hospital admissions for these countries.

The temporal trends in CRC hospitalizations reported in this study can be partly explained by nationwide increases in the incidence of CRC. Increasing incidence trends can also reflect better screening policies. Although Brazil still needs to consolidate a nationwide integrated cancer-screening program for CRC, diagnostic tests have gradually become more widely available in the Public Health System (6).

Regarding age, the highest age-stratified hospitalization rates were observed in patients older than 60 years; in absolute percent terms, however, only 41% of the hospital admissions occurred in this age group between 1996 and 2008; in contrast, most hospitalizations principally for CRC in the United States in 2006 occurred in patients older than 65 years (62.3%) (21). Given that CRC is predominantly a disease of older individuals, the aging of Brazil's population probably will be accompanied by an increased incidence of CRC cases. By the year 2030, the population age 65 or older will account for about 13.3% of the Brazilian population. Currently, this age group represents 6.9% of the total population (22). Furthermore, population aging probably has an important role in the economic and epidemiologic impacts of CRC screening (23).

Despite the significant increase in the total charges for CRC admissions between 1996 and 2008, the number of total admissions has increased in the same manner, which might have contributed to the decreasing trends observed in the mean hospital charge per admission. This trend may denote that financial resources allocated for CRC hospitalizations are insufficient to support the growing admission rates. On the other hand, a decreasing mean hospital charge per admission could be partially explained by the decreased mean length of stay.

Because the total economic impact for CRC has not been studied in Brazil, the percentage that hospitalization charges represent in CRC overall costs is unknown. Nevertheless, the economic costs of CRC admissions in Brazil are notably low when compared with those reported by more developed countries, even when adjusted for international economic variations using the PPP conversion factor; this observation probably can be extended to the CRC total economic costs.

Possible limitations of the study concern the accuracy of the SIH-SUS data, which may be affected by imprecise information registered on medical records and by the fact that the principal diagnosis may be selected based on the amount the Public Health System will pay for it (24, 25). Data obtained from large government databases are also limited because of the variability of information provided by each health care center, the lack of clinical information, and the heterogeneity in the quality of health care among distinct areas of the country. Moreover, as it is unknown how specifically the CRC admissions registered in the SIH-SUS databank represent overall CRC admissions in Brazil, another limitation of this study relates to representativeness of the data. It is known, however, that to some degree SUS partly finances high-complexity procedures for private patients (26), such as oncologic treatment; therefore, the SIH-SUS databank may also include data from private patients.

In conclusion, this study demonstrated that hospitalization rates for CRC in the Brazilian Public Health System significantly increased between 1996 and 2008. Furthermore, these data provide an insight into the increasingly significant economic impact of colorectal cancer admissions to the health system.

Further studies are necessary to determine the epidemiology and the total economic costs of CRC in Brazil. A possible way to improve both the quantity and the quality of information nationally on the epidemiology of CRC could be to create an independent database supported by multiple cancer care reference centers from all geographic regions of the country. This would enable a more accurate assessment of costs related to this disease in Brazil.