The prevalence of asthma has increased in industrialized countries in recent decades. There is now evidence for a high prevalence of asthma in Latin America that has reached epidemic levels in some urban centers (1, 2). The causes of these temporal trends are not clear but have been attributed to changes in environmental exposures and lifestyle factors such as those associated with the processes of urbanization.

Considering all asthma as a single disease entity is an oversimplification (3). Different asthma phenotypes may predominate in different settings and be associated with distinct etiological factors and causal mechanisms (4). Of particular interest is that the proportion of asthma cases attributable to atopy has been shown to be highly variable (5); the existing evidence, while scarce, suggests that in Latin American countries most asthma cases in children appear not to be associated with atopy (6-9).

Atopy can be determined by skin test reactivity to environmental allergens or the detection of allergen-specific IgE in serum. The two measures have been used interchangeably to define atopy, even though there is important disagreement between these two measures, particularly in populations in nonindustrialized countries (9-12).

This study explored the relationship between asthma and atopy defined either by the presence of allergen-specific IgE in serum or by skin prick test (SPT) positivity in children living in underprivileged urban settings in northeastern Brazil. The study took advantage of the existence of a cohort study on asthma and allergy in children, and these children were resurveyed.

This study was conducted in the city of Salvador, located in the northeastern region of Brazil with more than 2.8 million inhabitants, mostly of mixed African descent, with a high prevalence of symptoms of asthma (defined as wheezing in the last 12 months) in the International Study of Asthma and Allergies in Childhood (ISAAC) surveys: 17% for schoolchildren aged 6-7 years and 25% for those aged 13-14 years (13).

This study was conducted as part of a cohort study on asthma and allergies. The details are described elsewhere (14). Briefly, it comprises a group of 1 445 children living in 24 micro-areas from poor neighborhoods throughout the city. This population was used before in studies to evaluate the impact of a sanitation program on the occurrence of childhood diarrhea (14-17). This study analyzed data on asthma and allergy collected in 2005, when the children were 4-11 years old. Data on helminth infection were available for 1 403 of the 1 445 children: 18.3% were infected with Ascaris lumbricoides, 16.3% were infected with Trichuris trichiura, and 1% were infected with hookworm. Details on helminth infections and their association with atopy have been described (18), and the association with asthma is described elsewhere (19).

A questionnaire, including questions about the core asthma symptoms of the ISAAC questionnaire and translated into Brazilian Portuguese (20), was applied during household visits by trained interviewers. In a follow-up visit, allergen SPTs were performed on the right forearm of each child with the following extracts (all ALK-Abello, Denmark): Dermatophagoides pteronyssinus, Blomia tropicalis, Blatella germanica (German cockroach), Periplaneta americana (American cockroach), pooled fungi, dog and cat epithelia, and saline and histamine controls. Pollen extracts were not included because pollen allergy is not found in the tropical northeastern region of Brazil. Wheal sizes were read after 15 min. A test was considered positive if the mean of two perpendicular diameters (excluding flare and pseudo-pods) was > 3 mm greater than that of the negative control. The SPT was considered positive if reactivity was present for at least one allergen. Blood samples were collected for measurement of IgE specific to D. pteronyssinus, B. tropicalis, B. germanica, and P. americana using the ImmunoCAP assay (Pharmacia, Upsala, Sweden). The lower detection limit for allergen-specific IgE is 0.35 kilounit (kU)/L. Specific IgE levels were grouped into four categories: < 0.35 kU/L, > 0.35 kU/L to < 0.70 kU/L, > 0.70 kU/L to < 3.5 kU/L, and > 3.5 kU/L. For the purposes of this analysis, atopy was defined by either a positive skin test to at least one allergen or by the presence of at least one detectable allergen-specific IgE. The highest level observed for any specific IgE was used to define a child's allergen-specific IgE level. The analysis was done for the total population studied and separately for those with and without detectable allergen-specific IgE. The questionnaires were applied between June and October 2005, and the laboratory tests were performed between November 2005 and March 2006. Analysis was done with categorical data with cut-offs based on biological grounds rather than using continuous variables because data on IgE and skin tests were highly skewed.

Association measures using prevalence ratios were done initially with Poisson regression models with a robust estimator specifying micro-areas as a cluster to adjust for the clustering effect. However, only unadjusted results are shown because models with and without adjustment for clustering showed similar results. Parental asthma and sex were used as potential confounders. Age was used as an effect modifier and estimates were done separately for children aged 4-5 years and 6-11 years. Asthma was present in similar proportions in children with and without parents who reported smoking; therefore, this variable was not included in the analysis.

The population attributable fraction (PAF) was estimated as pd × [(OR - 1)/OR] × 100, where pd is the proportion of total asthma cases arising from the exposure category (21), and the odds ratio (OR) was used instead of a prevalence rate ratio (PRR) (22). Analyses were done using Stata version 8. 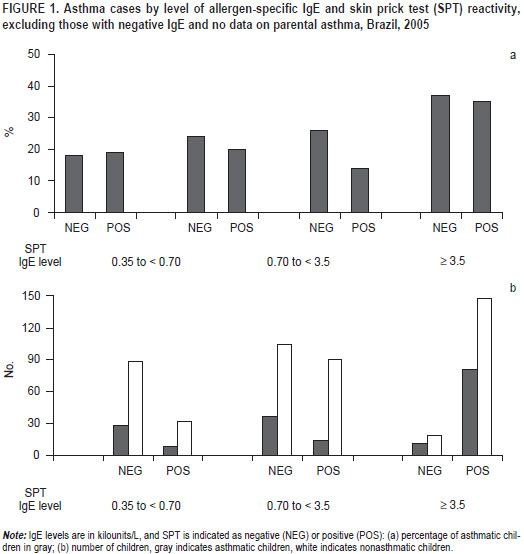 Helminth infections can potentially induce the production of false-positive allergen-specific IgE in low titers (i.e., 0.35-0.70 kU/L) through immunological cross-reactivity between helminth and aeroallergen-specific IgE (27). There is no evidence for this observation in the current report, however. In this study, specific IgE levels were associated with both SPT and asthma, but, for the same level of specific IgE, the prevalence of asthma was the same in those with positive and with negative SPT. This suggests that the results of SPT in this population do not provide information supplemental to that offered by the level of specific IgE. In this population, and perhaps in similar populations, allergen-specific IgE may be the most useful indicator of the presence of sensitization and therefore atopy in an individual. Levels of specific IgE were also associated with asthma. In this study population, one-third of children with negative SPT had detectable IgE levels and would have been considered nonatopic if specific IgE had not been measured.

The panel of aeroallergens included in this study reflects the most common allergens in the northeastern region of Brazil. The possibility of pollen allergy was not examined in this urban population because, unlike the southern region of the country (28), pollen-associated allergy is not reported in the literature from this tropical region of Brazil (Medline and Lilacs searches) and has not been observed in the authors' clinical practice or in that of other national experts who were canvassed informally.

Atopy as defined by the presence of allergen-specific IgE was very frequent in this study. Atopy is not always accompanied by asthma and the proportion of atopic subjects who develop clinical disease varies. Data from ISAAC Phase II surveys found that a higher fraction of recent wheezing was attributable to atopy (measured by allergen skin test reactivity) in affluent (41%) than in nonaffluent countries (20%) (7). In populations such as the one used in this study where atopy is frequent, not all asthma in atopic children is caused by atopy (25). The fact that nonatopic asthma is more prevalent in this population supports previous work, also in Brazil (6), which demonstrated a higher prevalence of nonatopic asthma. However, it is worth emphasizing some differences between the two works. In the previous study, the prevalence of atopy was 13%; it was based on a temperate climate (extreme southern Brazil), and the atopy definition was based only on results from SPT and involved children aged 9-12 years. In contrast, in this study atopy was prevalent in 49%, the atopy definition was based on IgE, the study site was located in a tropical area, and younger children from 4 to 8 years old were involved. In this study, when specific IgE levels of asthmatics and nonasthmatics were taken into account, the proportion of asthma cases attributable to the presence of specific IgE was estimated to be no more than 24.5%. The interpretation of a PAF of 24.5% is that, in the absence of atopy, there would be a 24.5% reduction in asthma prevalence in the total population. A higher proportion of children with allergen-specific IgE who are not asthmatics results in a smaller proportion of asthma cases attributable to atopy estimated by the PAF. When it is assumed that allergen-specific IgE is the cause of asthma in children with detectable allergen-specific IgE, the importance of atopy as the sole cause of asthma is likely to be overestimated. This was suggested in previous articles, in which estimates of current wheezing attributable to atopy (PAF) varied from 2.0% to 59.6% (7), as the idea that risk factors other than atopy would play a more relevant role in causing asthma in Latin America (29). This may have led to a distortion of research priorities in the search for causal explanations for the temporal trends of increasing asthma prevalence and detracted from the search for the mechanisms underlying nonatopic asthma and potentially the development of effective prevention and treatment.

The importance of atopy in the asthma epidemic in developing countries may have also been overestimated, for two reasons: inconsistencies between different definitions of atopy (use of either SPT or allergen-specific IgE) and the uncritical assumption that asthma has characteristics similar to those reported in Europe and the United States of America. Asthma with and without atopy may represent distinct phenotypes associated with different environmental and genetic risk factors. As the hygiene hypothesis was proposed to explain temporal trends in atopy (30), although it remains relevant to populations in which most asthma is atopic, it is unlikely to explain trends in asthma not associated with atopy.

Atopy has been recognized as the strongest risk factor for asthma, and therefore asthma commonly has been considered an atopic disease. However, there is evidence that a large proportion of asthma cases in several settings are not associated with or attributed to atopy. Several studies have found different risk factors for atopic and nonatopic asthma, suggesting different causal pathways. For example, in some studies respiratory infections-especially respiratory syncytial virus (31)- maternal smoking and mold stains (32), and being sedentary (33) were associated with nonatopic but not atopic asthma. This suggests that nonatopic asthma can have a variety of causes related to environmental exposures such as infections. These differences can have important implications with regard to preventive measures. However, there is poor agreement on the definitions of different phenotypes of preschool wheezing disorders (34).

There are two main limitations of this study. First, it is a cross-sectional study and conclusions about causality should be done cautiously, including estimates of PAF that require some assumptions (22). Second, the study site was a tropical and urban area where pollen allergy is not common, and one should be careful in generalizing results to more temperate regions. Given these considerations, the main conclusions are that nonatopic asthma is the most prevalent phenotype of asthma in this population, suggesting that atopy is not causally associated with most asthma cases, the association between specific IgE to common aeroallergens and asthma seems to be independent of skin test reactivity in this population, and the skin test provided no additional information, indicating that specific IgE may be a more accurate measure of atopy than SPT in similar populations.

Clinicians and investigators should be aware that among children from underprivileged settings in low- and middle-income countries who are exposed to helminths and other infectious agents, skin test reactivity may be inhibited by mechanisms that are not completely understood and that require further investigation. Specific IgE may be more sensitive for the identification of atopy.

22. Reichenheim ME, Coutinho ESF. Measures and models for causal inference in cross-sectional studies: arguments for the appropriateness of the prevalence odds ratio and related logistic regression. BMC Med Res Methodol. 2010;10:66.