Voluntary reduction of trans-fatty acids in Latin America and the Caribbean: current situation

As part of the Pan American Health Organization/World Health Organization Trans-Fat-Free Americas initiative, 12 representatives from food industries in Latin America and the Caribbean signed a declaration stating their intention to voluntarily eliminate industrially produced trans-fatty acids (TFA) from the Americas. A year later, in order to document the extent of the voluntary reduction, each declarant was asked to describe all reformulations and reductions in the TFA content of their products. After up to six requests for data, only three declarants provided such information in detail, and three others offered an overall summary of their reformulations. Additionally, three declarants reported the barriers that limit this process: availability of oil substitutes, cost, and consumers' sensory acceptance. The content of TFA and saturated fat in the food supply in the Americas should be regulated and strictly monitored in order to adequately evaluate a reduction of TFA in the region.

In light of scientific evidence about the negative health effects of TFA, the Pan American Health Organization/World Health Organization (PAHO/WHO) has taken a leadership role on the issue of phasing out TFA to improve diets and promote healthier lifestyles in the Americas. In May 2007, PAHO/WHO convened a trans-fat-free task force composed of expert scientists and public health figures from 11 countries in Latin America and the Caribbean (LAC), the United States of America, and Canada with the goal of eliminating TFA in foods. In September 2007, the task force organized a meeting with leading global food conglomerates to encourage and accelerate the process for voluntary elimination of TFA in their products. In order to boost the process of TFA elimination in LAC, in June 2008 delegates from the subregion's major food companies and industry associations (Brazilian Association of Food Industries [ABIA], Burger King Corporation, Cargill Corporation, Grupo Arcor, Kraft Foods Company, Kellogg Company, McDonald's Corporation, Nestlé, PepsiCo, SADIA S.A., Watt's S.A., Yum! Brands, Inc.) signed a declaration at a meeting in Rio de Janeiro (2) stating their intention to assist public health institutions in achieving the goal of "trans-fat-free Americas." Progress toward this goal, based on industry responses to a questionnaire developed by the authors, is reported here.

Between June and October 2009, the task force and PAHO/WHO invited the food industry delegates to provide information on their reformulations and initiatives to decrease the TFA content of their products. Standardized data collection instruments were provided to each company for such reporting, including questions on the percentage and type of fats and oils used to replace TFA, the current and past (2006) content in specific types of food products, and descriptions of obstacles the company may have experienced in trying to eliminate TFA. Only 3 of 12 declarants (PepsiCo, ABIA, and McDonald's Corporation) completed the survey in full. Of the remaining nine companies, Nestlé, Burger King Corporation, and Cargill Corporation responded with a summary statement of their efforts, but without data on specific products; Watt's S.A. stated they were unwilling to participate because they did not carry any of the products detailed in the questionnaire (i.e., baked or fried goods); and Grupo Arcor, Kraft Foods Company, Kellogg Company, SADIA S.A., and Yum! Brands, Inc., did not respond to up to six requests for data. In addition to the direct industry questionnaires, two investigators searched, systematically and independently, each declarant website for information on TFA contents of products in LAC markets using the search terms trans fatty acids, trans fats, and trans in English, Spanish, and Portuguese.

All three respondents that provided detailed data demonstrated progress toward formulation of low-TFA or TFAfree supermarket foods in multiple products, ranging from fast foods to seasoning and sauces to chocolate candies, cookies and crackers, and chips (Table 1). The highest amounts of remaining TFA appeared to be in cookies and crackers and in seasonings and sauces. PepsiCo indicated a reduction of TFA content in cookies and crackers sold in Mexico and the Caribbean from a previous 1530 g to 00.3 g per 100 g of total fat after reformulation; interestingly, its cookie and cracker products in North America still contained 1128 g of TFA/ 100 g of product. In seasonings and sauces, ABIA indicated that TFA content averaged 11.50 g/100 g in products ranging from broths to salad dressings to premixed sauces. 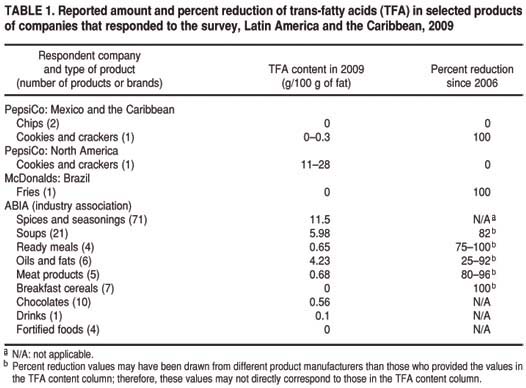 McDonald's LAC restaurants indicated a shift away from TFA-containing oils and toward two major substitutes: a blend of cotton, palm, and soybean oils in Brazil and high-oleic-acid sunflower oil in the rest of South America. In Central America and the Caribbean, McDonald's used oils with zero TFA based on a blend of sunflower, canola, soybean, and corn oils. Overall, McDonald's in Brazil indicated TFA contents in prepared foods between 0.2 and 0.6 g per serving, compared with 1.1 to 5.9 g per serving before reformulations. Burger King Corporation indicated having transitioned to cooking oils with 0 g of TFA in all restaurants in the Americas and the Caribbean since 2008. By their report, all baked goods, par-fried, and preportioned items on their menus are now TFA-free; however, no data were provided on the extent of the TFA reduction or on the types of fat substitutes used. On the website, they mentioned only that the company would transition to two proprietary blends of three oils nationwide, but they did not specify the oils or whether the change would also apply to LAC (3).

The information provided on the websites regarding TFA reduction was often scarce or too general. Among nonrespondents, the websites of Watt's S.A. and SADIA S.A. declared efforts to reduce TFA from their products in Latin America but provided no other specifics (4, 5). Yum! Brands website indicates that all oils used in KFC and Taco Bell restaurants in the United States switched to 0 g of TFA cooking oil at the end of April 2007, but no information is provided on LAC restaurants (6). Kellogg and Kraft Foods websites declared similar efforts to reduce or eliminate TFA in all or most of their products but provided no specifics (7, 8). There was no further mention of TFA on any of the other nonrespondents' websites (Table 2). 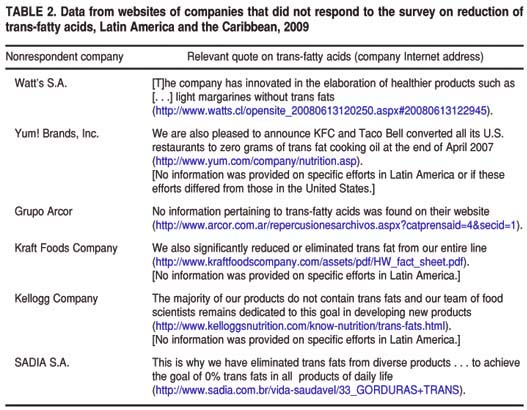 PepsiCo, ABIA, Nestlé, and Cargill Corporation described three key challenges to realizing a voluntary transition away from TFA and toward healthier oils in LAC. These challenges included identification and availability of suitable oil and fat substitutes; the cost of substitution with healthier oils; and concern about consumers' sensory acceptance for some products, especially those requiring "hard" fats such as cookies and crackers, to maintain the desired mouth-feel.

The first two obstacles, availability and cost of raw material, are evidenced by the various types of fats used in different countries. In Brazil, for instance, respondents indicated that the local supply of alternative low-TFA oils was limited and that importing such oils was costly. In addition, according to ABIA, upcoming legislative elections and changes in economic prospects in Brazil have threatened imports, further limiting the local supply of alternative low-TFA oils. Thus, the respondents noted that their solutions to replacing TFA in the same product often varied from country to country. For example, Cargill reported facing challenges in the availability of certain raw materials (e.g., canola oil, high-oleicacid sunflower oil) for use in some of their low-TFA solutions. Although they failed to provide specific information on which products and which countries, the authors know, from information provided by McDonald's, that Cargill supplies high-oleic-acid oils in Mexico and Canada, and high-linoleic-acid oil in Venezuela. McDonald's also reported using oils with 0 g of TFA and low-tomidsaturated fat content in South America and Central America and, simultaneously, using 0 g of TFA and oils with higher saturated fat (e.g., cotton, palm, and soybean) in Brazil. In a private conversation after the survey, McDonald's reported plans to change to 0 g of TFA and low-to-midsaturated fat oils in Brazil and all the Americas by the end of 2009. Nestlé, ABIA, and PepsiCo also reported a varied mixture of fats, ranging from cocoa butter and palm kernel oil to corn oil to high-oleic-acid sunflower oil, as TFA substitutes. The use of these fats depends on the type of product and the cost of the raw material to substitute TFA oils. Only PepsiCo provided detailed information on approximate percentages of the substitutions: in chips and snacks, they used corn oil to replace TFA in 56% of their products, mid-oleic-acid sunflower oil in 25%, and a mix of corn and low-linolenic-acid soy oils in 19% of their products. Palm oil replaced TFA in 100% of PepsiCo's cookies and crackers.

This study presents the most current, publicly available or shared information regarding the voluntary action by some food industries to eliminate TFA from products in LAC. This information suggests that some multinational and international companies are voluntarily reducing TFA in the products they sell in the region. However, because of the low response rate of industries approached, it is impossible to adequately evaluate any progress in this area without proper monitoring of TFA content in the food supply in LAC.

The information compiled here does not paint a complete picture of the reformulations to reduce TFA in all processed foods and cooking oils in the entire LAC region. For example, several industry declarants did not provide information, and numerous smaller local companies in the region were not surveyed. Information is also lacking on all the countries in the region. The low response rate precludes any firm conclusion on the status of the voluntary reduction of TFA in Latin America. More importantly, the low response rate and participation of the industry in information sharing also raises a pressing question about the extent of the voluntary reduction and about further participation from industry in addressing this public health matter. It is important to emphasize that the stakeholders asked to participate in this short survey had already signed a declaration recognizing the need to maintain regional and national dialogue to materialize the objective of a TFA-free Americas in the shortest time possible (2). The difficulty in information sharing with these industry champions makes the future dimmer for cooperation with smaller companies that have not yet been included in international efforts to reduce TFA.

Aside from the exceptional cases of Costa Rica and the Netherlands (1, 9), experiences elsewhere have shown that voluntary industry efforts are usually followed by government regulation in order to achieve a major reduction of TFA content in the food supply (911). However, the establishment of regulations does not appear to be the only solution for TFA reduction. The implementation of TFA reduction in New York City restaurants succeeded thanks to capacity building for health department inspectors and food outlet inspections (9). A systematic monitoring program can also provide an incentive to reduce TFA. In Canada, for example, the results of the TFA monitoring program showed an important reduction of the TFA in prepackaged foods from several food categories (e.g., cookies, crackers, margarines, foods from fast food and restaurant establishments); in many cases, the reductions were much lower than the 5% limit suggested and were achieved by using healthier alternatives that did not increase the amount of saturated fat (12).

In summary, although data from this report suggest a move in the right direction toward TFA reduction, voluntary efforts do not appear to ensure, and certainly do not offer the information to monitor, a major reduction in TFA in theLAC region. In recent years, some LatinAmerican countries have initiated regu-latory processes to limit TFA content in the food supplies of their countries(1316). To ensure that there is progressin meeting TFA reduction in LAC, theauthors recommend implementing TFA regulation in conjunction with systemat-ically and uniformly monitoring the con-tent of TFA and saturated fatty acids inthe food supply.

1 For the purpose of this article, the acronym TFA refers to artificially or industrially produced transfatty acids.