Nonmedical costs (NMCs), both direct and indirect, are found in practically all health care delivery systems in the world. These costs include, but are not limited to, expenses such as transportation, time spent traveling, food, and lodging that are attributed to patients' and their family's health care needs (1). NMCs have been shown to be substantial components of patients' health care costs and are thus barriers to accessing health care for some patients. Yet these costs are often overlooked by insurance schemes, health care workers, and health system planners (1-7). This can result in a high financial burden, defined in the literature as spending more than 10% of the family income on health care, which can result in patients making difficult decisions about their treatment options that may adversely affect their health outcomes (1, 2).

Less is known about NMCs for rural populations in low-income countries, as much of the research on quantifying these costs has been done on oncology patients in the United States of America (1).

The Ministry of Public Health (MOH) of Ecuador provides greater than 50% of all health care services and the National Institute of Social Security provides another 20% to 25% to the Ecuadorian population. Other providers include the private sector, military, police, municipalities, nongovernmental organizations, and other semiprivate institutions. As of 2007, there are more than 3100 nonhospital health care facilities, presumably dedicated generally to primary health care for the total Ecuadorian population of 14.2 million (8). This suggests that primary care coverage is better than in many other low-income countries. There are about 90 MOH second-level hospitals, predominantly in rural areas (8). However, many of them struggle to function as hospitals because of financial and human resource limitations. As is true in many low-income countries, rural areas, which are home to roughly 40% of Ecuadorians, are high-priority targets for improving health in Ecuador because of much higher levels of poverty (80% of inhabitants are considered poor in rural areas vs. 40% in urban areas) and worse health indicators (such as a disproportionate prevalence of short height for age and malaria) than in urban areas (9).

This study attempts to quantify the NMCs incurred by patients and their families from the rural Ecuadorian county of La Maná who were seeking second-level health care services. NMCs between two groups are compared: one group of patients without access to second-level care in their county and a second group of patients in the same county who later gained access to this type of care.

La Maná is a rural, subtropical region with a population of about 17 276 in the western part of Cotopaxi province, Ecuador (11). It was chosen because a new MOH county hospital providing second-level health care services opened there in March 2008, making it an ideal setting to conduct a pre- and post-intervention study on the impact of the new hospital. As in other rural areas in Ecuador, most people in La Maná did not own automobiles and relied on taxis and public buses to access second-level health care services in other regions of the country.

The study used a quasi-experimental pre- and post-intervention design. Data were collected with a questionnaire to patients from La Maná who had accessed second-level care before and after the MOH hospital opened there. Cost data for the pre-intervention group were collected between June and August 2007 from patients who had to travel out-side of La Maná to access second-level health care during the previous 24 months. The questionnaire was administered to 254 patients in their homes by local MOH workers who identified eligible participants by door-to-door canvassing in each of the major population centers that would be served by the new La Maná County hospital. The second round of data collection was performed in September-December 2008 with 254 patients who had accessed second-level care at the new MOH county hospital in La Maná instead of traveling to another city. These 254 patients were interviewed upon discharge from the hospital. The number 254 was used because it was the number of patients interviewed in 2007. The study attempted to make the 2007 and 2008 groups as comparable as possible by keeping the proportion of patients from each population area equal.

To gain some perspective on the relative magnitude of these NMCs, a patient's financial position was estimated in two ways. The first estimate used monthly household expenditure, which was derived from patients' self-reported monthly expenditures. Monthly household expenditure has been shown to be a more accurate and stable predictor of wealth than monthly income for farmers and rural laborers because of seasonal changes in their incomes (12). The second estimation technique used national data on average monthly rural household expenditures from the 2005 National Survey of Living Standards in Ecuador (13). All monetary costs were measured in United States dollars, as that is the official currency of Ecuador (14).

Data from the questionnaires were scored and input into an electronic spreadsheet for analysis. Data were analyzed with SPSS statistical software (SPSS version 17.0, Chicago, Illinois, United States of America). Patients for whom only one NMC was recorded were removed from the total NMC analysis, totaling 67 of the 508 patients. Non-recording occurred when patients did not recall precise costs or when a relative or friend had paid costs, which were unknown to those present at the interview. Patients who did not incur costs were scored as a zero, not as a nonresponse. NMCs from the 2007 and 2008 samples were compared by using Mann-Whitney U tests. For the combined samples, correlations between the total monetary NMCs (transportation costs + food costs + clothing costs + shelter costs), travel time, and monthly expenditure were examined using Spearman nonparametric correlation coefficients. Linear regression models were used to predict total monetary NMCs in the combined samples. For the regression analyses, the non-normally distributed outcome variable (total monetary NMCs) was log-transformed to approximate distributional normality. 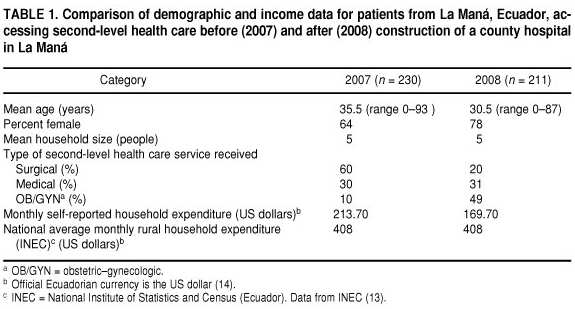 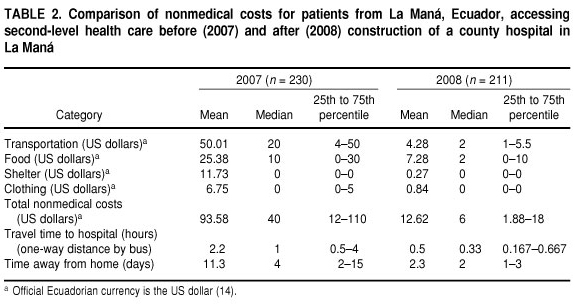 The 2008 group had significantly lower costs of accessing second-level health care than the 2007 group. The NMC savings were largely due to the reduced transportation and food costs incurred by the 2008 group, likely stemming from reduced travel times. This reduction in costs occurred largely because the patients in the 2008 group were able to satisfy their health care needs much closer to home, which meant they did not have to spend as many resources on transport to get to and from the hospital. By receiving medical care closer to home, the 2008 group was also able to save resources by eating meals brought from home instead of buying food at restaurants.

Mean values, in general, exceed median values. Although there are likely to be many factors underlying this non-normal distribution, one potential contributing factor is the observation that as the hospitalization time for patients increases, the number of family members who visit the patient often also increases. Thus, as hospitalization time is prolonged, or when care is sought at a faraway urban center, the NMCs incurred by patients and their caregivers increase simply because there are more total caregivers or more frequent visits from caregivers. Further study is required to assess the impact of substantial NMCs on patient financial stability and well-being.

These results demonstrate that, even in a publicly funded system such as Ecuador's with no user fees, NMCs are potentially a large proportion of a patient's monthly income, which can put patients at financial risk and act as a barrier to accessing health care. Another cost not measured in this study is the cost of care for children and other dependents left at home when patients and their caregivers are away from the domicile seeking health care in another city or region. Reducing NMCs through the creation of local hospitals in rural areas could thus increase health care access, particularly for poorer patients.

The linear regression of total monetary NMCs versus travel time and monthly expenditures was done to analyze whether patients from the 2007 group, who on average were wealthier than the 2008 group, incurred larger monetary NMCs simply due to their being wealthier and having an inherent ability to spend more money. If this were the case, the decrease in monetary NMCs seen in the 2008 group might be attributable simply to the fact that it is a poorer population with a more limited spending ability compared with the wealthier 2007 group. However, the fact that travel time, and not the wealth of the patient, was the only significant (P < 0.001) predictor of monetary NMCs makes this hypothesis much less likely.

Comparison of demographics for the 2007 and 2008 groups

As noted above, the 2007 and 2008 groups differed demographically in many ways. Household size appears to be the only similar demographic. The 2008 group appears to consist of a younger, poorer population seeking second-level care for a greater proportion of obstetric-gynecologic conditions (mostly labor and delivery) instead of surgical conditions. The presence of a disproportionate number of obstetric- gynecologic patients in the 2008 group did not appear to change the results or impact of the 2008 data, as indicated by the analysis of a subgroup of the 2008 patients that was weighted to have equal proportions of obstetric-gynecologic diagnoses as the 2007 group (data not shown).

This study has several limitations and biases. Collecting information only from patients who accessed the health care facility introduces a selection bias whereby patients who could not access care because of its high costs (direct and indirect) were excluded. Interviewing the 2007 group in their homes and the 2008 group in the hospital created an environmental bias. Interviewer and language biases might have also existed, as the 2007 interviews were conducted by Ecuadorians from La Maná while the 2008 interviews were conducted by two Americans, for whom Spanish is a second language. The study was also highly susceptible to recall bias because the study design relied on patients' abilities to accurately recall details of events that might have occurred up to two years prior. The interview method was chosen to collect study data in order to mitigate the effects of this bias. Finally, although subjects in both groups came from the same population centers in La Maná, subjects in 2007 were selected based primarily on convenience (i.e., if they were present when MOH interviewers arrived) and thus only approximate the population served by the new hospital.

As this study was performed in the Ecuadorian subtropical district of La Maná, it may be difficult to generalize to other areas of Ecuador or to other countries. For example, clothing costs were important in this study because of the large altitude changes that occur when traversing the Andes mountain range. Additionally, Ecuador has poorly maintained roads, which added significant travel time and costs. Whether other rural populations share similar conditions will determine this study's applicability.

Through a quasi-experimental, pre- and post-intervention study design in one community in rural Ecuador, we demonstrated that significant reductions in NMCs are achieved when a second-level hospital is introduced. This study focuses on the cost to patients in the community and not costs to the health care system. Further investigation is recommended to compare the cost savings of patients in a community with the costs incurred by the health care system to expand second-level health services where first-level health care services are generally available.

Acknowledgments. We thank the Ecuadorian Ministry of Health, the staff at the Centro de Salud La Maná, the patients interviewed, and the charitable donors to Andean Health and Development for their support in making this study possible.

13. The standard of living of Ecuadorians-results of the fifth National Survey of Living Standards. Quito: National Institute of Statistics and Censuses; 2006.