OBJECTIVE: To describe the analysis of geographical and temporal distribution of DNA profiles determined by pulsedfield gel electrophoresis (PFGE) of methicillinresistant Staphylococcus aureus (MRSA) strains isolated from hospitalized patients in a tertiary care university hospital in Brazil.
METHODS: Ninetynine samples of MRSA obtained from 89 patients in the period 1999 2004 were studied. MRSA strains were isolated from central venous catheters (33 isolates) and bloodstream infections (66 strains). PFGE with 20 units of SmaI restriction endonuclease was used for genomic typing.
RESULTS: Analysis of DNA PFGE of 99 strains of MRSA revealed 26 profiles and their respective related profiles. The mean time interval for detecting MRSA infection was 26 days from hospital admission. Forty-nine patients (57.6%) had a recent hospitalization. The DNA PFGE MRSA profiles were distributed in three clonal groupsI, II, and IIIaccording to the period of time when the MRSA strains were isolated. DNA PFGE MRSA profiles were spread homogeneously through all hospital wards.
CONCLUSIONS: Changes in the distribution of DNA PFGE MRSA profiles were largely temporal, with clonal groups being replaced over time, without predominance in any hospital ward or any specific area of the hospital.

Staphylococcus aureus is a pathogen responsible for a variety of community and hospital-acquired infections; it also colonizes skin and nares of healthy individuals (1). S. aureus resistance to β-lactam antibiotics started soon after the introduction of penicillin in clinical practices in the mid-1940s; the most common mechanism is production of penicillinase induced by the bla gene, which is usually carried on a plasmid (2). The first description of methicillin-resistant S. aureus (MRSA) appeared at about the same time penicillinasestable β-lactams became available. The main mechanism of methicillin resistance is mediated by the acquired PBP2a, encoded by the mecA gene.

Molecular typing methods have been applied to help researchers map the spread and evolution of MRSA clones, including pulsedfield gel electro-phoresis (PFGE), multilocus sequencing strain, and staphylococcal cassette chromosome mec typing (6, 7). PFGE is still considered a standard reference molecular technique for analyzing dissemination of hospital and community-acquired MRSA and has proved to be one of the most discriminatory methods (8). It has been an excellent laboratory tool for emergency identification of new clones (9).

This study aims to describe the analysis of geographical and temporal distribution of DNA profiles, determined by PFGE, of MRSA strains isolated from hospitalized patients in a tertiary care university hospital.

The study was conducted in a 400-bed tertiary care, university hospital (Hospital and Clinics HCUNICAMP) in Campinas, Sao Paulo, Brazil, which provides all major medical services and is the reference hospital for 5 million inhabitants. A descriptive study was performed in a collection of 99 MRSA isolates obtained from 89 patients who were hospitalized from January 1999 to February 2004. MRSA strains were isolated from central venous catheter (33 isolates) and bloodstream (66 isolates) infections. Eighty isolates were individually obtained from 80 patients. A second or third isolate was included in the study, if there had been a minimum interval of 10 days. Nine patients had more than one MRSA isolate.

The isolates were collected in the presence of clinical signs and symptoms of infection. The results from the growth of > 15 colony-forming units from a 5cm segment of the central venous catheter tip by semiquantitative (roll plate) cultures were considered positive. Blood samples were collected and cultivated by means of the Bactec® automated system. The clinical pathology laboratory had previously identified the MRSA strains and stored them in 10% skim milk, at 20ºC, in the molecular epidemiology and infectious diseases laboratory.

The strains were inoculated on blood agar plates and S. aureus was confirmed with the Staphy test commercial kit (Probac, Sao Paulo, Brazil). Oxacillin resistance was confirmed by means of the disc diffusion method according to the recommendations of the National Committee for Clinical Laboratory Standards using 1μg oxacillin and 30μg cefoxitin discs (10).

Genomic DNA preparations for PFGE were done as described by Goering and Duensing (11) with modifications by Branchini et al. (12) using 20 units of SmaI restriction endonuclease (Gibco Life Technologies, Grand Island, New York, United States of America). Restriction fragments were separated by means of the CHEFDR® III (BioRad, Hercules, California, United States) electrophoresis system. Pulse time ranged from 5 to 35 seconds for 18 hours at 6 V/cm. A DNA ladder was used as a molecular weight marker. The gel was stained with ethidium bromide and photographed.

Eighty-nine patients with documented MRSA infections (blood culture or cath-eter-related infection) were included in the study; 61 (68.5%) were males from 20 to 50 years old, and 48 (56.4%) had had a surgical procedure. HIV serology was performed in 85 patients and 84.7% had a negative result. The mortality rate in the studied group was 63.5%.

Patients were in different units of the hospital, including clinical and surgical emergencies, bone marrow transplant, hematology, pediatrics, adult and pediatric intensive care wards, oncology, rheumatology, neurosurgery, orthopedics, internal medicine, infectious diseases, nephrology, cardiology, pneumology, gastric surgery, and AIDS day care center. Forty-nine (57.6%) patients had a prior hospitalization; among them, 38 (44.7%) had a hospitalization < 1 year before and 11 (12.9%) had been hospitalized > 1 year before (Table 1).

Analysis of the DNA PFGE profile of 99 MRSA strains showed 26 profiles, which were identified with numbers from 1 to 26, and their respective related profiles were named with lowercase letters from a to g (Table 2). Patients with more than one sample evaluated showed a different DNA PFGE profile. 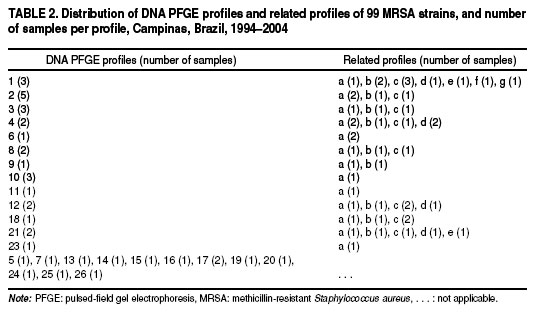 DNA PFGE MRSA profiles were spread homogeneously across all hospital wards (Table 3). No specific localization of DNA PFGE profile with regard to the physical location of hospital wards was observed. 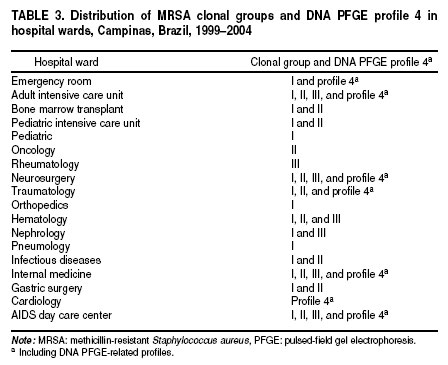 MRSA has been a major concern causing colonization and infections in hospitalized patients worldwide. Hospital infections with MRSA are reported to be caused by strains belonging to a single clone or to clones related to an endemic one (14). A large diversity of MRSA DNA profiles was identified by PFGE during this 6year study. This study observed that changes in the distribution of DNA PFGE MRSA profiles were largely temporal, with clonal groups being replaced over time, without predominance in any hospital ward or in any specific area of the hospital. Of note, DNA PFGE profile 4 remained present throughout the study period, although it was not a predominant pattern.

Most patients in this study had been previously exposed to a hospital environment either by prior hospitalization or by outpatient surgery. Therefore, despite the mean time of about 3 weeks from hospital admission or inpatient surgery to MRSA detection, whether they had become colonized earlier on is not known. In that case, the DNA PFGE profile would represent the prevalent strain in periods other than the studied period.

A previous study conducted in the same hospital by Padoveze and Branchini (15) demonstrated a high similarity of DNA PFGE MRSA profiles. This study was carried out in the 1990s in two infectious disease wards and mainly included AIDS patients. A later study performed in our institution demonstrated an increasing DNA PFGE profile diversity compared with the previous study (14).

These studies may support a better understanding of the hospital epidemiology by MRSA strains and suggest a progression toward a greater diversity in DNA PFGE profile while MRSA remains endemic in our hospital. The diversity and replacement of DNA PFGE MRSA profiles observed over time in this study might be explained by microevolution of the pathogen or by strain competition to adapt in the hospital environment.

Trinidad et al. (17) reported a high variability in MRSA-related profiles of the Brazilian endemic clone (BEC), where the predominant profile was observed in 15% of the strains. Oliveira (18) reported that 70% of the strains of a study conducted in hospitals in different regions of Brazil belonged to the BEC profile. Da Silva Coimbra et al. (19) reported that 49% of MRSA isolates from three hospitals in Argentina had the profile of the BEC. In a German hospital, Ghebremedhin et al. (20) reported greater heterogeneity among MRSA strains during a 1-year study. Changing patterns of MRSA were also detected in a 16-year study in Portugal (21). Blanc et al. (22) identified MRSA clone replacement by other emerging clones, suggesting a rapid change.

This study was limited to evaluating the DNA profile defined by PFGE of samples obtained from blood and catheter-related infections. For a better understanding of the characteristics of clonal replacement, appropriate additional research is necessary, including staphylococcal cassette chromosome mec typing of all MRSA infection and colonization samples.

In conclusion, this study showed that the distribution of DNA MRSA profiles determined by PFGE was temporally rather than geographically defined in the hospital, demonstrating that temporal changes in the electrophoretic pattern can occur in an endemic environment.

Several studies using different molecular typing methods have demonstrated the diversity of MRSA genomic patterns, either in MRSA strains from the same hospital unit or among genotypes disseminated locally, nationally, and internationally. This fact supports the hypothesis that the greater the geographical spread the greater is the genomic evolution (16).

The authors received financial support for this study from the Internal Medicine Department, Faculty of Medical Sciences, State University of Campinas.

16. van Leeuwen W, van Belkum A, Kreiswirth B, Verbrugh H. Genetic diversification of methicillin-resistant Staphylococcus aureus as a function of prolonged geographic dissemination and as measured by binary typing and other genotyping methods. Res Microbiol. 1998;149(7):497507.