Most mental disorders are associated with affective dysregulation. Mood and emotion disturbances are a diagnostic criterion of anxiety, mood, and personality disorders (1, 2). Accordingly, researchers pay increasing attention to the link between psychopathology and affect regulation deficits (3, 4). The Generalized Expectancies for Negative Mood Regulation (NMR) Scale (5) has made important contributions to advances in this area (623).

The NMR Scale measures "the expectancy that some behavior or cognition will alleviate a negative mood state" (5). Response expectancies theory (24, 25) makes an important prediction about this construct. According to this theory, expectancies have a self-confirming effect: information that is congruent with an expectancy is given priority over incongruent information during processing. Because of selective processing, perceptions and experiences tend to be consistent with one's expected nonvolitional response. Thus, NMR expectancies influence the success of mood regulation strategies: believing that one can engage in strategies to reduce a negative mood makes these strategies more efficacious (26).

The NMR Scale has played a central role in a large number of studies on mental health and mental disorders. In the beginning, these studies used the NMR Scale only with nonclinical samples. For instance, several studies found that NMR expectancies predicted depression and anxiety prospectively in student samples (710). Furthermore, empirical evidence indicates that NMR expectancies buffer the negative consequences of stress: using samples of students and police officers, two studies found that greater stress was associated with increasingly more distress and depression when subjects had low NMR expectancies (6, 11).

Another study showed that students' anxiety before an examination had a negative impact on their performance only when their NMR expectancies were low (12). Furthermore, problematic alcohol consumption was found in adults and adolescents with low NMR expectancies (13, 14). To conclude, NMR expectancies have turned out to be an important individual resource protecting against mental health problems.

During the past few years, an increasing number of studies used the NMR Scale with clinical samples. Several publications reported that clinical groups had lower NMR expectancies than controls. This result was observed for patients with eating disorders (15), for patients with major depression (16, 17), for subjects who had attempted suicide (18), and for patients who were being treated for alcohol and drug addiction (19).

The examples mentioned show that NMR expectancies have received a lot of attention from the research community. However, the opportunity to conduct international research on NMR expectancies is limited. The NMR Scale has been translated into Hebrew (18), German (16, 29), and Japanese.1 Thus, it is possible to conduct studies on NMR expectancies only with a small fraction of the world population. Spanish is the second most widely spoken language in the world, with 329 million native speakers (30). This article introduces a Spanish version of the NMR Scale, the NMR-S.

The current study assessed the psychometric properties of the NMR-S, including its factor structure and internal consistency. The English language NMR Scale is one-dimensional (5), with a coefficient a ranging from 0.80 to 0.92 (5, 31). Furthermore, this study sought to validate the NMR-S by testing its construct validity. The NMR-S should correlate negatively with depressive symptoms (26) and have only a modest correlation with social desirability. The reported correlations of the NMR Scale with the CrowneMarlowe Social Desirability Scale (SDS-CM) (32) range between 0.20 and 0.23 (5). Consistent with previous research, the NMR-S should be related to emotion regulation and coping strategies (26). More precisely, the NMR-S should correlate positively with reappraisal, problem solving, and seeking social support and negatively with suppression and avoidance. These associations have been reported for the English language NMR Scale (14, 33). The study also tested whether the NMR-S predicted depressive symptoms independently from other constructs. The NMR-S should predict variance in depressive symptoms in a cross-sectional design beyond what is predicted by emotion regulation strategies and coping (6, 26, 28).

To conclude, this article introduces the NMR-S as a Spanish version of the NMR Scale (5). The following study assesses the reliability and validity of the new instrument by means of its internal consistency, its factor structure, its construct validity, and its incremental validity.

A total of 360 participants completed this study. They were students at the Universidad de Chile and were recruited in seminars or on the university campus. Participants' mean age was 21 years (standard deviation = 2; range = 1829). Most subjects were female (n = 255, 70.8%), and a smaller proportion were male (n = 100, 27.8%; missing: n = 5, 1.4%). Subjects were informed that participation in the study was voluntary. They provided written informed consent before admission to the study. The study protocol was approved by the ethics committee of the Faculty of Medicine of the Universidad de Chile.

The NMR-S was developed jointly by native Spanish speakers in Chile, Spain, and the United States of America so the NMR-S would be applicable to populations in several Spanish-speaking countries. Individuals from Chile and Spain independently translated the English language NMR Scale. The two versions were merged into one translation that both translators agreed on. The merged version was back-translated by a Spaniard, and the back-translation was compared with the original English version. In the United States, bilingual individuals proposed slight modifications, to which the translators from Chile and Spain agreed. To aid comprehension, the instructions were condensed with out sacrificing content. The resulting NMR-S consists of 30 items, which all begin with "When I am upset, I believe that . . ." ("Cuando estoy mal de ánimo, creo que . . ."). A sample item is "When I am upset, I believe that I can feel better by doing something creative." Response options for the items range from 1 (strong disagreement) to 5 (strong agreement). The scale includes 10 items referring to behavioral strategies, 10 items concerning cognitive strategies, and 10 general items.2

The second edition of the Beck Depression Inventory (BDI-II) has 21 items assessing symptoms of depression. There is substantial evidence for its reliability and validity in research and clinical practice (34). Participants completed the Chilean adaption of the BDI-II (35).

The SDS-CM (32, 36) is the instrument most commonly used for measuring a response bias due to social desirability. It contains 23 truefalse items describing socially undesired but common behaviors as well as desired but uncommon behaviors. A high score indicates that subjects endorse a number of unlikely responses. The second and the fifth author chose the SDS-CM from Argentina (36) for this study because this instrument seemed to be a sound translation of the SDS-CM that would be well suited for application in a Chilean sample.

The Emotion Regulation Questionnaire (33, 37) measures two kinds of emotion regulation. First, it is possible to modify an emotion by cognitively reappraising the emotion-eliciting event. Second, the emotional response can be controlled by suppressing it.

The Coping Strategy Indicator (38, 39)3 consists of 33 items comprising three scales. The problem-solving scale includes strategies that directly aim to solve the problems that cause the stressful situation. Seeking support refers to coping by seeking support from the social environment to deal with the situation. Avoidance comprises behaviors to distract oneself from the problemfor instance, daydreaming or fantasizing.

Cronbach's α as a measure of internal consistency was used to estimate the reliability of the NMR-S. Single items were analyzed by means of the corrected item-total correlations. As previous studies reported corrected item-total correlations below 0.30 for some of the behavioral and cognitive items of the NMR Scale (26, 29), rit> 0.20 was chosen as the criterion for including items in the final NMR-S. In order to investigate the structure of the NMR-S, a common factor analysis was combined with a scree test and parallel analysis (40, 41). The associations between the NMR-S and other measures were tested by means of Pearson's correlation coefficient. The incremental validity of the NMR-S was analyzed by linear regression analysis. 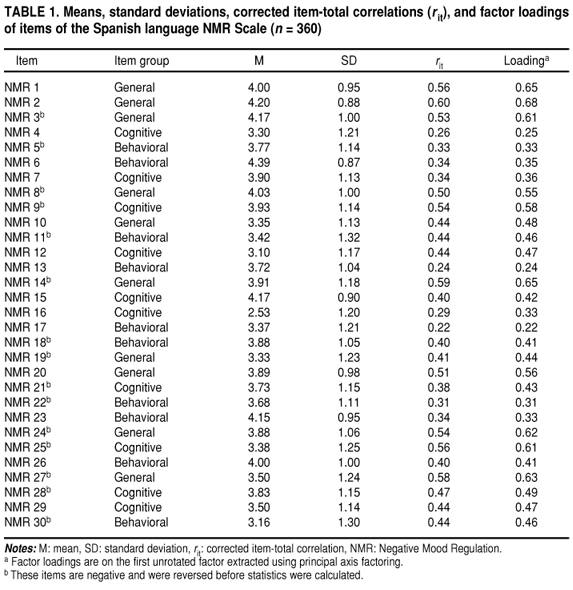 The results of a common factor analysis indicated that the NMR-S has a one-dimensional structure (KaiserMeyerOlkin measure of sampling adequacy = 0.89). Table 1 includes factor loadings from the first unrotated factor, illustrating that all items had positive loadings and most had loadings higher than 0.30. The scree test was consistent with the extraction of one factor. The first factor had an eigenvalue of 6.88 and explained 22.94% of the variance. The following factors consistently had eigenvalues around 1 (factor 2: 1.45, factor 3: 1.01, factor 4: 0.87, factor 5: 0.65). Parallel analysis also extracted one factor. The 95th percentile random data eigenvalues of the first two factors were 1.66 and 1.55. 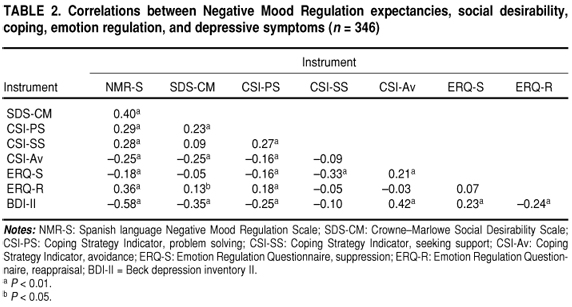 Previous research with the English language version of the NMR Scale established that NMR expectancies are positively associated with adaptive or approach coping strategies, independent of other important predictors (6, 26, 28). In this study, the relation between social desirability and NMR expectancies was stronger than that usually found with the English language NMR Scale. Therefore, partial correlations were examined between the NMR-S and measures of coping and emotion regulation, with social desirability controlled. As shown in Table 3, all partial correlations with social desirability controlled were statistically significant and were of similar magnitude to the zero-order correlations. 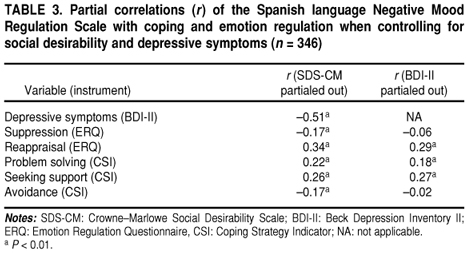 Similarly, it is important to demonstrate that associations between NMR expectancies and coping or emotion regulation are independent of current mood state. Accordingly, partial correlations were examined between the NMR-S and measures of coping and emotion regulation, with BDI-II scores controlled. Table 3 displays that the associations between the NMR-S and problem solving and seeking support as well as reappraisal remained significant when controlling for depressive symptoms.

The results clearly show that the NMR-S has a one-dimensional structure. This finding matches the results for the English language version (5). The internal consistency of the NMR-S indicates good reliability. The coefficient a corresponds to results for the English language NMR Scale (26). However, the instrument is not absolutely homogeneous: the corrected item-total correlations of four items fell below 0.30. These items were part of the behavioral and the cognitive item groups. This result is not unexpected. Previous studies on the English and the German NMR Scale consistently reported corrected item-total correlations below 0.30 for some behavioral and cognitive items. The behavioral and cognitive elements of NMR expectancies were more heterogeneous than the general component (26, 29).

The correlations of the NMR-S with depressive symptoms, emotion regulation, and coping were in accordance with the predictions. This finding supports the construct validity of the new instrument. The NMR-S correlated significantly with social desirability, which was not unexpected because believing in one's ability to regulate negative moods is socially desirable. While the effect size of the association was larger than that reported for the English language NMR Scale (5), partial correlation analyses showed that the relations between the NMR-S and the other measures were independent of social desirability. Equivalent analyses replicated this result when depressive symptoms were partialed out. In a test of the incremental validity of the NMR-S, the instrument predicted symptoms of depression significantly in a cross-sectional design when controlling for emotion regulation and coping, replicating numerous studies using the English and German versions (6, 26, 28).

In sum, the results of this study suggest that the psychometric properties of the NMR-S are good. However, future research should extend the evidence on the new instrument. First, future studies should investigate its testretest reliability. Second, the sample of this study was quite homogeneous: subjects were students from Chile and most were female. Whether the results of this study generalize to heterogeneous nonstudent samples, to clinical samples, and to Spanish-speaking samples from countries other than Chile remains an open question.

Future studies should provide further evidence on the psychometric properties of the new instrument. If these studies show that the present version of the NMR-S cannot be applied in these samples, researchers should revise the present version to achieve an instrument that can be applied to Spanish-speaking patients across the globe. At the moment, the results of this study provide the first evidence to support the reliability and validity of the NMR-S. Thus, the NMR-S provides a basis for researchers from Spanish-speaking countries to investigate the link between NMR expectancies and mental health.

Acknowledgments. The first two authors contributed equally to this study. The research underlying this article was supported by a scholarship from the Comisión Nacional de Investigación Científica y Tecnológica of Chile awarded to Vania Martínez and a scholarship from the Universität Heidelberg awarded to Nils Pfeiffer. The authors gratefully acknowledge the assistance of the following individuals with different aspects of the translation and back-translation process: Nadia Alvarez, Bruce R. Burningham, Marc Hoerster, Alejo Martínez-Sansigre, and Guadalupe Ramos.