The study objectives were to map the different stages of the nutrition transition for each department within Peru, and to determine the nutrition policy needs for each geographic area based on their current stage in the nutrition transition. Results show that most of the country is suffering from a double-burden of malnutrition, with high rates of stunting among children less than 5 years of age and high rates of overweight and obesity among women of reproductive age. Currently, Peru has only country-wide nutrition policies, administered by the Ministry of Health, that are primarily focused on stunting prevention. This study argues for the need to have decentralized nutrition policies that vary according to what type of malnutrition is being experienced in each geographic area.

The nutrition transition refers to changes in diet and physical activity patterns that result in changes in body composition at the population level; specifically, a switch from undernutrition as the main nutritional concern to overweight and obesity (1, 2). Factors associated with the nutrition transition include the demographic transition (1, 2), urbanization (2), economic development (3), globalization (4), and some biological factors (1, 4). The increase in obesity rates in lower- and middle-income countries is occurring at a faster rate than what was observed in higher-income countries (1). In Latin America, for example, wealthier countries such as Chile and Mexico have higher rates of obesity than poorer countries such as Guatemala, although obesity in poorer countries is quickly increasing. Within countries, obesity rates are higher overall in urban areas (5). Most of the research in Latin America shows that in the poorest countries, obesity is more common among the high socioeconomic groups, but as the rate of economic development increases, the burden of obesity shifts to the poor (5, 6).

This study examines the nutrition transition in Peru using Geographic Information Systems (GIS) mapping. Peru is a geographically diverse country that is administratively divided into 24 departments and one province (Callao); the departments vary in size and population. Even though departmental governments were given some political autonomy since the passing of the Regionalization Law of 2002 (7), decentralization is not complete and departmental powers are constrained by policies and guidelines prescribed by the central government. For example, departmental governments can develop health-related programs based on their department's needs, but these programs are constrained by the national health goals set by the Ministry of Health (7, 8).

Maps were created using a shapefile with a map of South America (10), a shapefile with a map of Peru (11), and a shapefile with Lake Titicaca (12). Additionally, non-geocoded anthropometric information for women and children was obtained from the Peruvian National Institute of Statistics and Informatics (INEI) (9); these anthropometric data included prevalence of stunting (low height-for-age, indicating chronic undernutrition) for children less than 5 years of age and prevalence of overweight (including obesity; BMI > 25 kg/m2) for women of reproductive age (15-49 years of age) for the year 2010. Rates of stunting and overweight were calculated based on measured weight and height obtained from the Demographic and Family Health Survey, which is based on a nationally representative sample obtained through a cluster sampling design (9).

Using ArcGIS® (Environmental Systems Research Institute Inc., Redlands, California, United States) two maps were created: the first shows the prevalence of stunting among children; and the second, the prevalence of overweight, including obesity, among women for each department in Peru. To map the non-geocoded anthropometric data, a Microsoft ExcelTM (Microsoft Corp., Redmond, Washington, United States) spreadsheet containing these data was joined to the Peru map shapefile by department name.

Figure 1 shows two maps: one displaying the prevalence of stunting for children less than 5 years of age, and the other displaying the prevalence of overweight/obesity for women 15-49 years of age. Huancavelica, which is located in the central Andean area and is the poorest department in Peru, has the highest prevalence of stunting: 54.6%. Other poor Andean departments with high rates of stunting include Cajamarca (40.5%), Ayacucho (38.8%), and Apurimac (38.6%). All departments in the central and southern coastal areas, which have the lowest poverty rates, have stunting rates of < 15%. 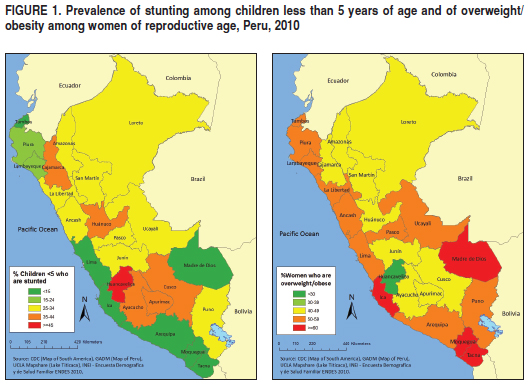 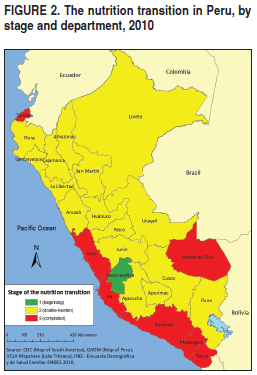 As Figure 2 illustrates, differential policies are needed in Peru based on the reality of each geographic area. The green area (only the department of Huancavelica) needs to focus mostly on decreasing stunting prevalence; the yellow area (most of the country) needs to tackle both stunting and overweight; and the red area (central and southern coastal departments, plus Tumbes and Madre de Dios) needs to focus on fighting the increasing prevalence of overweight and obesity.

Peru is going through the nutrition transition with each department facing different rates of under- and over-nutrition. Overall, the poorest departments are still facing high rates of stunting, while most of the country shows high rates of overweight and obesity. Until very recently, the Ministry of Health had focused its resources mainly on surveillance and control of infectious diseases and had not developed the health infrastructure needed to deal with the increase in obesity and associated chronic diseases (13). However, on 18 March 2011, the Ministry of Health approved the "Estrategia Sanitaria Nacional de Alimentación y Nutrición Saludable" (National Health Strategy for Healthy Feeding and Nutrition) (8), which for the first time includes overweight and obesity among its priorities; stunting was previously included. Although this strategy (8) mentions the reduction of overweight and obesity prevalence among children and adults as one of its goals for 2021, to date there are no specific actions associated with it. Therefore, it is unclear what type of obesity prevention efforts will take place, when will they start, and how much money will be allocated for this purpose. In contrast, the Government of Peru has been funding food assistance programs focused on reducing rates of undernutrition since the 1980s, spending close to US$ 375 million in 2009 alone (14).

The limitations of this study include the arbitrary nature of the cut-off points used to assign each department into one of the stages of the nutrition transition. To our knowledge, there are no published standards on appropriate cut-off points to designate a geographic area as being in the beginning, double-burden, or completed transition stage. Therefore, the study data was used to determine the cut-off points using values that were considered appropriate for the mapping exercise. In addition, men were not included in the study since the Demographic and Family Health Survey (9) targets only women of reproductive age and children less than 5 years of age. The most recent, nationally-representative data available show that 43.8% of Peruvian men 20 years of age or more were overweight or obese in 2005 (15). Even though these rates are similar to those observed among women at the country level, there is no data for men at the departmental level; therefore, it cannot be assumed that the distribution shown in Figure 1 (obesity map) would be the same for men were they included in the study.

Despite approving the Regionalization Law of 2002 in which some political and administrative powers were transferred from the central government to the departments, the reality is that Peru is still a centralized country, with the Ministry of Health dictating countrywide policies to address Peru's major health and nutrition issues. Results of this report, however, argue for the need to have different nutrition policies based on the reality of each geographic area. Prevention strategies for both stunting and obesity need to be implemented and prioritized based on departmental needs. Additionally, research that focuses on how to create nutrition interventions for populations suffering from both ends of the malnutrition spectrum is warranted, and could include adapting existing programs, such as food assistance programs, to reflect current realities.

4. Popkin BM. The shift in stages of the nutrition transition in the developing world differs from past experiences! Public Health Nutr. 2002;5(1A):205-14.