Infant mortality has been declining worldwide (1, 2), but in Brazil this decline has been unevenly distributed (3). In view of these inequalities and the fact that about 70% of the deaths are preventable (4), some studies have pointed to the magnitude of this problem and to the need to reduce infant mortality rates (3).

Deaths occurring in children under one year of age-measured by the infant mortality rate-are nonrandom. This indicator is significantly affected by geographic space, with wide variations and inequalities among areas (5, 6). In recent years, researchers have focused their investigations on the spatial distribution of infant deaths (7, 8).

Methods are available that apply the category "geographic space" in health studies (8, 14). However, few studies have used Thiessen (Voronoi) polygons, which are a useful approach for describing areas of influence for health events with significant accurate results (15, 16). This approach makes it possible to determine comparable minimum areas based on the areas of influence of each municipality (17). While municipal boundaries are legally defined, Voronoi polygons are generated based on natural neighborhoods (17, 18). In this sense, the current study aimed to analyze the spatial distribution of infant mortality, identifying clusters with high risk of death in the first year of life.

An ecologic study was developed in the 184 municipalities of Pernambuco, a state of northeastern Brazil. Infant mortality rates were calculated by municipality, the units of analysis used in this study. To minimize random fluctuations in the number of deaths and births the triennium 2006 - 2008 was used as a reference to estimate average infant mortality rates. They were calculated by dividing total deaths in children less than one year old during the triennium by total live births during the same period for each municipality.

For the initial exploratory analysis of infant mortality rate, measures of central tendency and dispersion (mean, median, mode, and standard deviation) were calculated, and the Shapiro - Wilk test was performed to check for normal distribution (α < 5%).

Infant mortality rate was analyzed at two geographic levels: municipal boundaries of 184 municipalities and regions generated by using Voronoi polygons. Given a set of points pi in a Euclidean plane, the region Vpi for each point that was closer to pi than any other point pj determined a space corresponding to a Voronoi polygon (17 - 19).

In this study, points pi and pj were central areas of municipalities with a higher concentration of people, and areas Vpi and Vpj were new municipal divisions generated from the central areas as shown in Figure 1. 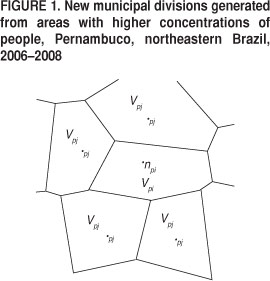 The first analysis of the spatial distribution of the infant mortality rate was performed to test for first-order spatial stationarity. A trend surface analysis was carried out, noting that there is a first-order stationary distribution when the average indicator is distributed evenly across the region studied.

The spatial pattern of the infant mortality rate was then analyzed using Moran's index and G-statistic and calculated based on first-order spatial contiguity relationships.

Global Moran's index (I) is given by the following formula

where zi is the deviation of the infant mortality rate in municipality i from the mean rate in the state, wi,j is the weight of neighboring municipalities i and j, and n is the total number of municipalities.

G-statistic is given by the formula

The Moran index and the G-statistic are interpreted under the null hypothesis (H0) that infant mortality rates are distributed randomly. This hypothesis assumes that infant mortality rate is first-order stationary-that is, its average is spatially constant. Acceptance or rejection of H0 is based on a P value and a z score associated with Moran's index (I) and G-statistic. Table 1 summarizes the interpretation of these indicators at P < 0.05.

Another major factor in the calculation of indicators is the choice of weights wi,j. These weights take into account the proximity of municipalities-the closer they are the greater the weight, or the farther apart they are the lower the weight. Closeness can be defined by distance or contiguity; however, both definitions have some drawbacks.

Closeness defined by distance is obtained from centroids of municipalities, but whether the population is concentrated exactly in these centroids is not revealed. Closeness is defined by contiguity when there is a common boundary between municipalities. Considering that populations concentrate mostly in central areas, these areas can be farther apart in two neighboring than in two non-neighboring municipalities, affecting the weighting. Another complicating factor is the fact that municipal boundaries are legally defined and generally form irregular polygons, which may refute the assumption of homogeneity of infant mortality rates in the entire municipality.

To minimize proximity issues between municipalities it was decided to use Thiessen (Voronoi) polygons.

Trend surface analysis projections of infant mortality rates in the east and north show that the rates are not spatially constant. The distribution of infant mortality rates is skewed in the municipalities, with declining rates in the north and east. This trend is quite similar using legally defined boundaries and Voronoi polygons, as shown in Figure 3.

When legally defined boundaries were used, the global Moran index was 0.29 (P < 0.01, z score = 6.41), indicating high or low infant mortality rates with clustering into nonrandom patterns. In contrast, the G-statistic did not confirm a spatial dependence (P > 0.05).

Infant mortality showed a spatial pattern that reflects health inequalities. In view of the fact that legally defined boundaries between municipalities are politically determined, the Voronoi polygons proved a useful method for analyzing spatial patterns of infant mortality. This was confirmed by comparing trend surface analysis, the global Moran index, and the G-statistic before and after the use of Voronoi polygons. The trend surface projections continued to decline in the east - west and north - south after the Voronoi polygons were used, providing evidence that the different rates are markedly associated with social inequalities.

The contrasting results found between the global Moran index and the G-statistic before the use of Voronoi polygons can be explained by the fact that they were calculated using legally defined boundaries. After the use of Voronoi polygons-that is, when first-order spatial contiguity was considered-both I and G results consistently showed spatial dependence of infant mortality.

The Voronoi polygons are a recognized approach for accurately describing areas of influence for health events (15, 16) based on spatial clustering; municipal polygons are generated based on the areas of influence of each municipality (17). While this approach has been validated, it is rarely used in health research-probably because it is less complicated to use legally defined municipal boundaries than population clustering for determining neighborhoods. Also, few computer programs have been developed to analyze Voronoi polygons.

Other studies have also found nonrandom spatial distribution of infant mortality (7, 8, 20 - 22). They pointed to the formation of spatial areas of higher risk of death in children less than one year old (11), particularly in localities with high social deprivation (5) and in rural areas (21). Loyola et al. (12) analyzed infant mortality in the Americas and concluded that the risk of death before the age of one is 20 times higher in less developed than in more developed countries.

Given that health events may have a low occurrence from a statistical standpoint, some strategies are applied to prevent random fluctuations or to make adjustments while constructing indicators. Some studies have used aggregation by population size (23) while others have used the magnitude of the denominator (22) or normalized transformations of data (24). The current study opted for the use of temporal aggregated data, measuring infant mortality rates during the triennium 2006 - 2008. Other authors have validated this research strategy (5, 11, 12, 25, 26).

Although good quality birth and death data were available in the state of Pernambuco (27, 28), underreporting of deaths in children under the age of one may be a methodologic limitation of this study.

Studies have applied a wide variety of spatial analysis techniques to study health data (7, 8, 29, 30), which have opened up possibilities for investigating the epidemiologic relationship between space and population and identifying population groups at greatest risk of illness and death (31 - 39).

The analysis of data involving the influence of geographic space requires taking into consideration territorial division, geographic proximity, and base year sample to avoid distortion (17). When these factors are considered, the Voronoi distance is quite reliable to approximate population heterogeneity, even for some unusual population distribution patterns (15). The method of Voronoi polygons has shown good explanatory power on population change for the quality of fit of the model and coefficients of explanatory variables (15 - 17). It generates statistics consistent with theoretical assumptions, providing evidence of the reliability of results (17), especially in the analysis of complex irregular shapes that cannot be well described by classic Euclidean geometry (16).

The current study evidenced the accuracy of Voronoi polygons in the spatial analysis of infant mortality. Trend curves remained unchanged and nonrandom spatial distribution of infant mortality was verified. In conclusion, the use of Voronoi polygons was a predictive approach for identifying population clusters that are at high risk of death in the first year of life and it proved very useful for epidemiologic surveillance systems. Its use is recommended in health studies as it can provide more accurate spatial patterns of infant mortality and thus allow public health authorities to more truthfully monitor this indicator.

25. Vilela MBR, Bonfim C, Medeiros Z. Infant mortality due to infectious and parasitic diseases: a reflection of the social inequalities in a municipality in the Northeast Region of Brazil. Rev Bras Saude Mater Infant. 2008;8(4):445 - 61.