Thyroidectomy is the most common endocrine procedure performed by surgeons. Hypocalcaemia is a frequently occurring complication following total thyroidectomy and leads to prolonged hospital stay. (1-3) The rate of symptomatic postoperative hypocalcaemia ranges from 5 % to 50 % (4), but only 1-3 % of cases are permanent and require a calcium and vitamin D supplement. Hypocalcaemia treatment depends on its severity; oral vitamin D or metabolites and calcium supplements are enough to relieve symptoms in mild cases and return serum calcium values to normal levels. Emergency admission to hospital is necessary in cases of severe hypocalcaemia, involving periodic serum calcium measurement, administration of intravenous calcium gluconate and high supplementary doses of oral vitamin D or metabolites and calcium.

It has been demonstrated that routine oral vitamin D or metabolites and calcium prophylactic administration during the postoperative period reduces symptomatic hypocalcaemia rate (5). However, the economic impact of this intervention must be assessed. Vitamin D or metabolites and calcium administration increase treatment costs because they must be used in all patients for at least one or two weeks after thyroidectomy. Such intervention's cost-effectiveness has not been assessed previously, so this therapy cannot be recommended for universal use due to health system differences.

This study was aimed at evaluating this treatment regime's cost-effectiveness in a developing country's health system.

Data from a previous systematic review which assessed vitamin D or metabolites and calcium administration's effectiveness in patients who had undergone total thyroidectomy was used here (5).

The cost-effectiveness economic analysis was based on a deterministic and probabilistic decision-making model, selected on the premise that different therapeutic strategies have different costs and different outcomes. The reference case in the current analysis was a patient who underwent total thyroidectomy, considering thyroidectomy as a therapy for goitre and well-differentiated thyroid carcinoma without lateral neck metastases.

Decision alternatives. Pursuant to what has been accepted in the literature, two mutually-exclusive decision alternatives were chosen as measures for preventing postoperative hypocalcaemia: postoperative supplementation with oral vitamin D or metabolites and calcium, exclusive oral calcium supplementation, both compared to no supplementation. These decision alternatives were used for assessing the following criteria: better effectiveness (using data from a previous systematic review), study design (only randomised controlled trials were included in the systematic review) and intervention and outcome costs (data was directly obtained from a first-level (highly specialised) institution and from the of the Social Security Institute of Colombia price manual). 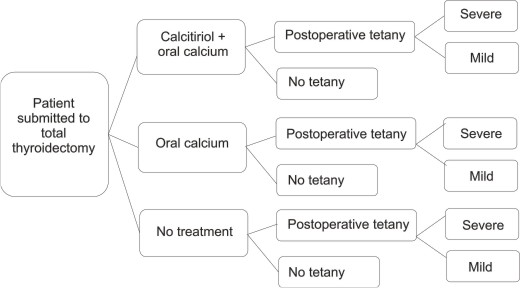 The likelihood of presenting postoperative hypocalcaemia, the probability of having a severe crisis in the patients presenting hypocalcaemia and final treatment cost were calculated for each pathway.

Analytical perspective. Health management organisations' (HMO) analytical perspective was adopted; it was chosen because such organisations ultimately pay for a particular therapeutic approach and therefore HMOs need well-documented suggestions concerning the implementation of protocols that may be included as part of an integrated healthcare approach.

Costs. The data were obtained from a cohort of 13 patients who had presented postoperative hypocalcaemia after total thyroidectomy in a first-level institution. Such data was complemented with data obtained from the literature. HMOs are mostly concerned with direct and indirect medical costs determining the amount to be paid. The costs for the model were obtained from the Colombian Social Security Institute's billing manual for integrated care (adjusted to 2008 prices) and the Colombian Manual of Pharmaceutical Products. The diagnostic and therapeutic procedures were selected in accordance with the Social Security Institute's procedures manual. Prices were converted to US dollars using the December 2008 conversion rate (1 dollar=2,204 Colombian pesos). The disease was divided into two phases for estimating average costs. The acute phase included emergency department evaluation, serum calcium measurement, acute treatment with calcium gluconate and length of stay which extended until symptoms were controlled. The chronic phase included the value of administering each strategy (vitamin D or metabolites + calcium, calcium), the value of treating the hypocalcaemia episode (divided into an intensive period involving higher doses for severe hypocalcaemia (carpopedal spasm) and a maintenance period with lower doses for mild hypocalcaemia (perioral tingling) and diagnostic tests and medical evaluation used during follow-up.

Time period. Postoperative hypocalcaemia is a condition that can be considered a short-course acute event. As the supplement was designed to alleviate the appearance of symptoms during the postoperative period, one month was considered to be sufficient time for identifying risks and benefits. Moreover, no discount adjustments were required. 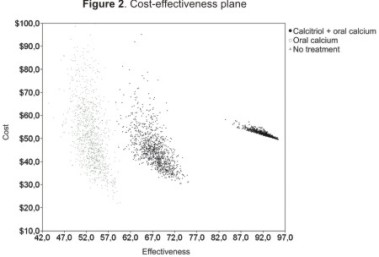 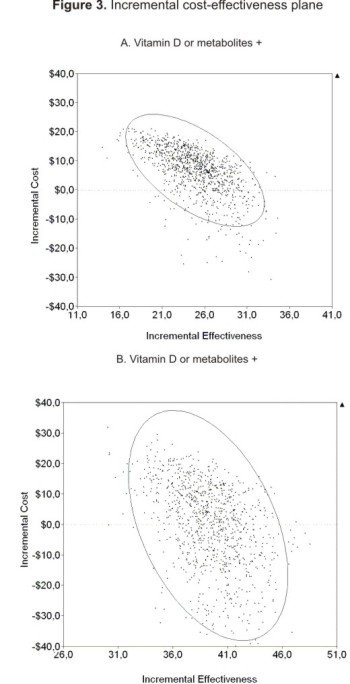 Postoperative hypocalcaemia is a common problem following thyroidectomy due to its high frequency and the decrease in quality of life for patients who suffer from severe symptoms (1,2). It has been previously demonstrated that using routine prophylactic vitamin D or metabolites and calcium or exclusive calcium decreases hypocalcaemia rate. This approach would avoid the measurement of serum calcium before leaving the hospital and any crisis would be less severe and easy to treat (6-10). No cost-effectiveness studies in other countries assessing this strategy in patients who underwent thyroidectomy could be found; existing randomised controlled trials (RCT) do not offer information about this outcome. As the results of a cost-effectiveness study cannot be readily extrapolated, it was thus decided to make such analysis considering cost differences in different health systems related to the local setting (11,12).