Methods A cross-sectional study was designed to evaluate the respiratory function through spirometry in subjects cooking with biomass or natural gas. All patients were evaluated by a general physician and a pulmonologist. We compared the prevalence of spirometry abnormalities across those cooking with natural gas versus those cooking with biofuel. A multivariable logistic regression and multiple linear regression were used to adjust differences by potential confounding factors.

Results 203 subjects were studied. There was a significant increase in the prevalence of severe obstructive pattern (OR 5.50; 95 % CI 1.17-25.79) in subjects who cook with biomass compared with natural gas users. Values of forced expired volume in one second (FEV1) and forced vital capacity (FVC) were statistically lower among those cooking with biomass. The prevalence of respiratory morbidity and symptoms were not statistically significant between both groups.

Conclusions These findings suggest that replacing biomass fuel by natural gas may be an important public health intervention in Colombia, because it can reduce the prevalence of abnormal patterns of pulmonary function.

Indoor air pollution continues to be an important cause of adverse health effects and mortality, especially in developing countries (1,2), where 50 % of residences and 90 % of rural houses use biofuels for cooking, the main cause of indoor air pollution (3). Recent estimations place the number of annual deaths associated to indoor air pollution between 1.5 and 2 million people, a million of those in children under 5 years old because of acute respiratory infections (1,4). According to estimations by Smith et. al., 24.6 % (95 % CI 18.8-30.8) of people in the Andean sub-region, where Colombia is located, (AMR-B) use biofuels for cooking (5). According to a meta-analysis by Po et. al. (2011) (6), Biofuel smoke is related to a 2.40 (95 % CI 1.47-3.93) increase of chronic obstructive pulmonary disease (COPD) and 2.52 (95 % CI 1.88-3.38) increase of chronic bronchitis in women.

When biofuels are used in stoves of inefficient combustion they generate high concentration of contaminants. Respirable particulate matter (PM) with diameters <10 μm (PM10) have concentrations from PM10 300 to 3000 μg/m3 for a 24 h period; and indoor CO levels from 1.2 to 43 ppm (7). Recommended standards in USA according to the United States Environmental Protection Agency are PM10<150 μg/m3 (8), and CO <5 ppm in indoor settings (7). Wood burning stoves and fireplaces contain significant levels of carbon monoxide (CO), nitrogen and sulfur oxides, aldehydes, and PM10 y PM2.5, all of them with a demonstrated adverse effect on human health (7).

The burden of disease associated to solid biofuels is notoriousin communities with inadequate access to clean fuels, particularly poor homes in rural areas of developing countries, where it is estimated that constitute a 2.7 % of overall health risks (1,9). Adose-response relation have been found between exposition to smoke from biomass, particularly wood smoke, and acute respiratory infections, chronic obstructive pulmonary disease COPD, lung cancer, asthma, tuberculosis and low birth weight (1,10-17).

The aim of the present study was to contribute to increase the scientific evidence on biofuels and adverse respiratory effects in Latin America, where these data are scarce. This study assessed clinical and laboratory parameters that have not been measured previously in other studies in the region.

This is a cross-sectional study that evaluated the respiratory function on a convenient sample of two populations. One sample cooks with biomass (wood, charcoal, organic waste), and another sample cooks with natural gas. Respiratory function was assessed through clinical and spirometry evaluation. The two rural localities were Santa Ana (0 meters above sea) and San Pablo (75 meters above sea), from the Caribbean region of Colombia.

The sample was taken from the two localities, one group of subjects using fuel and the other one cooking with biofuels. The survey was carried out during 2008 in patients older than 30 years old.

Identification and ascertainment of participants

An open call of voluntary participants was made in the chosen localities. Each subject and the locality leaders were informed of the aims of the study, and each subject before inclusion they were asked to give their informed consent. Because no invasive techniques were used, it was estimated that this study posed low risks for participants. No patient refused the test. Overall 203 adults were included in the sample. A pulmonologist (JMF) and a trained physical therapist performed the spirometry.

Participants were explained about the research scope, and they were asked to undertake a spirometry test. Before performing the spirometry data was collected on presence of respiratory symptoms and smoking history. Participants had a medical checkup by a physician before the spirometry procedure was undertaken.

A portable spirometer (BURDICK®) was installed in the community center of each locality and all tests were performed in those facilities. The spirometer recorded age in years (E), height in centimeters (T) and weight in kilograms (P) to estimate FVC through the next equations:

The method to perform the spirometry is explained in Figure 1. 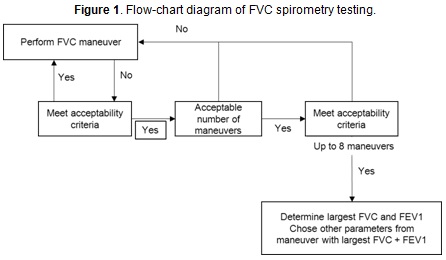 Qualitative patterns to interpret are: a. Normal pattern; b. Obstructive pattern; c. Restrictive pattern, and; d. Mixed pattern; evaluating the severity of each one (mild, moderate and severe). The interpretation was made by a pulmonologist.

Statistical analysis: After data was collected, it was analyzed using the statistical software Stata (Stata for Windows 11.1; Stata Corp; Texas, US). Body mass index (BMI), FEV1 and FVC were expressed in mean with standard deviation (SD±). Age, BMI, and education were categorized and reported with percentages. The risk of having a different spirometry pattern than normal was compared between those cooking with natural gas or biomass. A multiple linear regression β coefficient was estimated to assess the linear relationship between Forced expiratory volume in 1 second (FEV1) and Forced vital capacity (FVC) with the exposure variable, adjusted by age above 65, BMI, smoking, passive smoking and previous respiratory disease. Confidence intervals of 95 % and R2 were estimated. The following tests were used to test model adequacy: Studentized Breusch-Pagan test for homoscedasticity of residuals (not significant for both models), Q-Q plot for normality of residuals (Figure 2), and tests for multicollinearity. Multivariable logistic regression was used to adjust by age, sex, education, BMI and smoking. Confidence intervals of 95 % were used to determine Odds Ratio (OR). Categorical data was compared using chi-square (A P-value < 0.05 was considered significant). 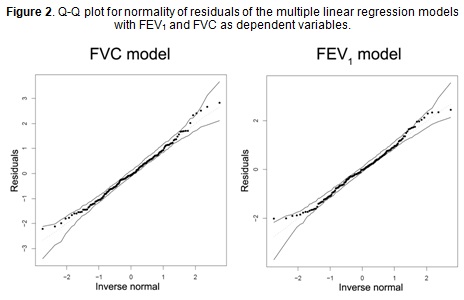 A total of 203 subjects were surveyed, 87 (42.9 %) in San Pablo and 116 (57.1 %) in Santa Ana. There were 35 subjects excluded from analysis because neither, fuel nor age, could be determined. Age was not reported from 26 participants and 11 did not report combustible type. No participant was excluded because of poor spirometry.

Of the remaining 168 patients, 24.1 % were male. Mean age was 54.4 (SD, 14.11), and mean body mass index (BMI) was 24.81 (SD, 6.14). Table 1 shows similar socio-demographic characteristics for the two populations; there is no difference in smoking prevalence between the two groups. Those cooking with natural gas had a significant higher percentage of high school and university education (27 %), compared with 9 % of those cooking with biofuels (P=0.003). 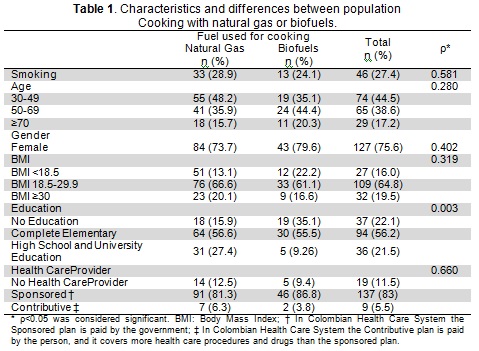 Gender, age group, and fuel type were not significantly different between patients with and without restrictive spirometry patterns (Table 2).

Multivariable logistic regression results show a significant increase of the risk to present respiratory alterations of the severe obstructive pattern in the population cooking with biofuels (OR 5.50; 95 % CI 1.17 to 25.79). Others risk assessments were not significant, including estimations of morbidity and respiratory symptoms (cough, expectoration and dyspnea). 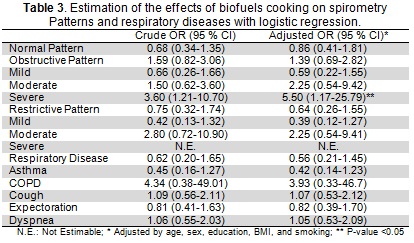 The present study adds on to the evidence of the association between indoor air pollution and reduction of several pulmonary function indicators. This is important because there are sparse data on indoor air pollution and deleterious respiratory effects for Latin America and the Caribbean using specific measures such as spirometry. The study shows a significant risk of a reduction of pulmonary function among those cooking with biomass or biofuels, when compared to people who used to cook with biomass but had shifted within the last 3 years to cooking with natural gas. The magnitude of the association was quite strong since people cooking with biofuels had a 5 times higher risk of having a severe obstructive pattern in the spirometry test.

This is one of the few population based studies on assessing the effects of indoor air pollution on population health in Latin America, which has the additional strength of having used spirometry to assess the respiratory function. A report from the World Health Organization (2002) found that 21 studies has assessed the association between indoor air pollution and Chronic Obstructive Pulmonary Disease (COPD) (18) between 1959 and 1999. Only 12 of them use spirometry to evaluate COPD, just four were carried out in Latin America and only two were community-based. The study made by Regalado in Mexican's women (2006) (19) was similar in methodology to the study presented here, but despite the large sample of people cooking with biomass (778 subjects), they did not find a significant relationship between lower FEV1 and FVC with biomass smoke. They did found however, a greater prevalence of PM10, and respiratory symptoms in subjects who cooked with biomass. We did not found the later effect, which can be explained for the subjectivity of perceived symptom.

Albalak et. al. in Bolivia (2009) (20) assessed the exposure with PM10 measurements, but no spirometry data was collected. They did found an adjusted OR of 0.4 for chronic bronchitis in subjects cooking outdoors, compared with subjects cooking indoors.

Many studies relate wood smoke from biomass with respiratory diseases (13, 15,19,21), and there is enough evidence of the direct effects of the components of wood smoke on the lung (22) to estimate the burden of disease of biomass smoke (2,4). Ezzati y Kammen (2001) performed an exposure-response study that proved exposure to indoor PM10 increases the frequency of acute respiratory infections in the setting of a low income country (Kenya) (13). It has been suggested that PM10 increases the risk of COPD (15), a studies in developing countries support this conclusion (23,24). A recent meta-analysis suggests that biomass smoke is associated with an increase in the risk of COPD (25), but included studies in the meta-analysis may have suffered from recall bias, according to the authors. Despite of that, it is unknown the level of pulmonary involvement, or what physiologic respiratory patterns are affected by smoke components. The evidence result of this study put FEV1 and FVC at the center of the alteration of the respiratory pattern caused by biomass smoke, and motivate the design and implementation of new individual-level studies in this subject.

This study has limitations. One limitation was the limited sample size, which lowered power and prevented better comparisons, especially in the risk assessment. Another limitation is related to the study design; as a cross-sectional study, the timeline of exposure-disease is not well established. Other important limitation was the incomplete determination of exposure to biomass smoke. Most of the population was exposed to biomass smoke for their lifetimes, because natural gas arrived to localities less than four years ago. This represents a bias, because the true level of clinical involvement already establish at the long term cannot be determined. This effectively underestimates the results because many people with the exposure before the four years may have had already lung damage and were categorized as natural gas.

Table 1 describe the population characteristics, and finds no differences of age, gender, BMI, and type of health care provider between the two studied groups. These results are correlated with the relation biofuel cooking-poverty, shown in the high prevalence of biofuel cooking in countries with low Gross Domestic Product (26). Besides, the lack of differences between the two studied groups and the multivariable analyses mitigate the selection bias resulted from the convenience simple.

In conclusion, this study increases evidence on the harmful effect of biofuels smoke in human health, and particularly in Colombia, recommends the assessment of potential health and/or economic benefits of introducing natural gas on rural populations of Colombia.

Acknowledgements and Funding: This research was funded by FundaciónPromigas. The funding entity did not have any role in the design of the protocol, collection of the data, interpretation of the results, writing of the manuscript or decision to publish the report.