To describe clinical, histopathological and treatment characteristics of melanoma in a private institution of Bogotá, Colombia, and to identify differences regarding sex and age.

Observational, retrospective study. 415 medical records between January 1999 and May 2014 were analyzed.

A predominance of thin SSMM and fair skin phototypes were found, unlike previous reports that showed acral lentiginous melanoma (ALM) as predominant, which may be caused by local variations related to mixed ethnicity.

The objective of this study is to describe the clinical, histopathological and treatment characteristics of melanoma in a private institution of reference for skin cancer, and to identify differences regarding sex and age.

This is a retrospective study that includes 415 patients diagnosed with CM treated at a private institution of reference for skin cancer in Bogotá, Colombia (Dr. Alvaro Acosta de Hart IPS SAS), between January 1999 and May 2014. Clinical, histopathological and treatment data were collected from medical records in a proper database. In order to evaluate different variables, melanoma was staged in accordance with the guidelines of the American Joint Committee on Cancer (AJCC) 2009.

Regarding the statistical analysis, quantitative variables are described as mean ± standard deviation (SD) and qualitative data as numbers and percentages. In addition, patients were divided into two groups considering sex and age (≥65 and <65 years of age), and compared using the Chi-squared test, Fisher's exact test and ANNOVA test, as appropriate. A p-value of <0.05 was considered statistically significant. Data analysis was performed using the statistical program, Statistical Package for the Social Sciences (SPSS) version 21.

The study was approved by the Research Ethics Committee of the Faculty of Medicine of the Universidad Nacional de Colombia.

Thumbnail
Table 1
Characteristics of cutaneous melanoma according to sex and diagnosed in a private institution of Bogotá, Colombia 1999- 2014
Thumbnail
Figure 1
Distribution of cases according to growth pattern per year of diagnosis

When analyzing the characteristics of melanomas in relation to age (Table 2), a predominance of LM was observed among senior patients (>65 years) and a SSMM pattern among patients aged ≥65 years (p<0.001). In addition, a large number of melanomas located on the head were found in patients older than 65 years (p<0.001) and ulceration was mostly detected among these patients (p=0.046).

Thumbnail
Table 3
Comparison between in situ vs. invasive CM and sex, race, age at diagnosis, growth pattern and ulceration

Although data on the incidence and prevalence in developed countries are well known, there is few data in Colombia. A local report described an average incidence of 3.5/100 000 per year in men and 2.9/100 000 in women, with higher incidence and mortality rates among senior adults, particularly men. 77. Curado M, Edwards B, Shin H, Storm H, Ferlay J, Heanue M, et al. Cancer incidence in five continents, Vol. IX. IARC Scientific Publications No. 160 [Internet]. Vol. IX. Lyon: IARC; 2007. Similarly, this study shows an increase of CM cases (Figure 1), probably caused not only by the global rise of this diagnosis, but to higher consultation by patients in the institution over time. Additionally, a higher preponderance of melanoma cases was found in men (58.8%).

To our knowledge, this is the first study detailing phototypes for Colombian patients with a CM diagnose. Although it was not possible to obtain phototypes for the total study population, it is considered that the recorded data correspond to a representative sample that allows obtaining an indicator of distribution of skin types treated at the institution.

Interestingly, in this series, a great proportion of phototypes II and III correlates with ALM (61%). Although, this subtype of CM has been reported to be more frequent in dark phototypes 88. Rouhani P, Hu S, Kirsner RS. Melanoma in Hispanic and black Americans. Cancer Control. 2008 Jul; 15(3):248-53., as detailed above, an important number of patients with fair skin phototypes was observed. Thereby, assessing other risk factors, for example being Hispanic as an independent factor to develop ALM, is desirable.

The literature has widely reported that location on lower limbs is more common in women 1212. Tucker M a. Melanoma epidemiology. Hematol Oncol Clin North Am. 2009 Jun; (3):383-95, vii., which correlates with the results obtained in this study, as 36.8% of melanomas were observed on lower limbs, followed by the head (33.9%). Nonetheless, a greater proportion of cm located on the head was found with 50.3% in men, as opposed to previous data which have reported a higher frequency of cm on the trunk 1313. Ríos L, Nagore E, López JL, Redondo P, Martí RM, Fernández-de-Misa R, et al. Melanoma characteristics at diagnosis from the Spanish National Cutaneous Melanoma Registry: 15 years of experience. Actas Dermosifiliogr. 2013 Nov; 104(9):789-99.. An association between older age and the development of lm on the head has been previously shown 1414. Anderson WF, Pfeiffer RM, Tucker MA, Rosenberg PS. Divergent cancer pathways for early-onset and late-onset cutaneous malignant melanoma. Cancer. 2009 Sep 15; 115(18):4176-85., which is confirmed by this study, presenting a statistical significance for a higher number of patients with cm on the head in patients over 65 years of age.

Regarding stage, a higher frequency for early stages and thin cm was found (47.2% for stage 0 and 37.4% for stage I; 49.4% in situ CM and 29.9% Breslow ≤1mm). In contrast, advanced stages have been observed in studies made by public institutions in Bogotá, with predominance of stage III and cm with Breslow >1mm (66.3%)33. Pozzobon F, Fierro E, Acosta Á, Carreñoc A. Características del melanoma cutáneo primario en el Instituto Nacional de Cancerología 2006-2010. Rev Colomb Cancerol. 2013 Sep; 17(3):111-8.. Those disparities are probably caused by cases that are referred from tertiary care hospitals and different population environments. Other studies have established the variance between populations in private and public institutions 1515. Zemelman VB, Valenzuela CY, Sazunic I, Araya I. Malignant melanoma in Chile: different site distribution between private and state patients. Biol Res. 2014 Jan;47:34.; the latter may treat populations with a lower socioeconomic and educational level, whose access to health care is more limited, which could explain a higher Breslow and stage, and therefore their worst prognosis 1616. Loria DI, González A, Latorre C. Epidemiología del melanoma cutáneo en Argentina: análisis del Registro Argentino de Melanoma Cutáneo. Dermatología Argentina. 2010; 16(1):39-45..

Differences between private vs. public healthcare have been observed also in the Chilean population in terms of ethnic, genetic and cultural conditions 1515. Zemelman VB, Valenzuela CY, Sazunic I, Araya I. Malignant melanoma in Chile: different site distribution between private and state patients. Biol Res. 2014 Jan;47:34.. The population that uses private clinics and has higher incomes is made up of about 20% of Amerindians and mainly Caucasian, while the population that uses public health care systems has a low socioeconomic stratum and is composed of 40% Amerindians and a darker phototype. This may suggest that ALM and a darker phototype is more frequent in patients using public health services, while SSMM and a fair phototype are more frequent in private practice.

In relation to atypical nevus, a statistical significance for a higher frequency in men compared with women was found in this work. The presence of atypical nevi and a higher number of common acquired nevus (30 or more) are associated with an increased risk of melanoma, as previously reported 1717. Bakos L, Wagner M, Bakos RM, Leite CSM, Sperhacke CL, Dzekaniak KS, et al. Sunburn, sunscreens, and phenotypes: some risk factors for cutaneous melanoma in southern Brazil. Int J Dermatol. 2002 Sep; 41(9):557-62..

The analysis made by age at diagnosis showed a statistical significance for CM in >65 years of age with higher proportion of LM, located in the head, ulcerated and thick tumors. These findings resemble other previous French studies that found melanomas in people older than 60 years and were characterized by more frequent head and neck locations, a later stage at diagnosis, as well as a higher proportion of ulcerated, thick tumors and higher Breslow thickness 1818. Barbe C, Hibon E, Vitry F, Le Clainche A, Grange F. Clinical and pathological characteristics of melanoma: a population-based study in a French regional population. J Eur Acad Dermatol Venereol. 2012 Feb; 26(2):159-64.. Analyses ≥40 or <40 years of age (data not reported in this work) have not found significant differences in frequencies by sex despite an increase of incidence in women younger than 40 years, which is probably related to a change in sun exposure habits and the increased use of tanning beds in this group 1919. Boniol M, Autier P, Boyle P, Gandini S. Cutaneous melanoma attributable to sunbed use: systematic review and meta-analysis. BMJ. 2012 Jan; 345:e4757..

A limitation of this retrospective study was that sample analyzed comes from a single private institution for skin cancer, with incomplete information in its clinical records, which did not allow evaluating some aspects of the population. Thus, data may not extrapolate to the entire population of the country. However, this study has the longest period of data collected and can be used to develop others studies in order to identify risk factors for melanoma development in Colombia.

In conclusion, this study reveals a divergence in frequency of a CM subtype in Bogotá, Colombia, and differences, in terms of age and sex, that may be related to demographic, ethnic and socioeconomic factors. In this study, CM cases were more common in men, with a mean age of 56 at diagnosis and high proportion of the SSMM subtype, as showed in reports of Caucasian populations. Regarding sex and location, it was more common on the head in men and on the limbs in women, with a predominance of fair phototypes.

The difference in CM presentation between public and private institutions raises the need to conduct further studies to understand better how socioeconomic and biological characteristics affect melanoma morbidity and mortality rates, which could improve early diagnosis and treatment, as well as the efforts of Public Health policies

None stated by the author. 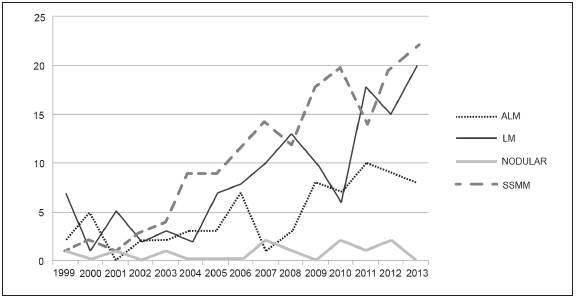 Table 1   Characteristics of cutaneous melanoma according to sex and diagnosed in a private institution of Bogotá, Colombia 1999- 2014 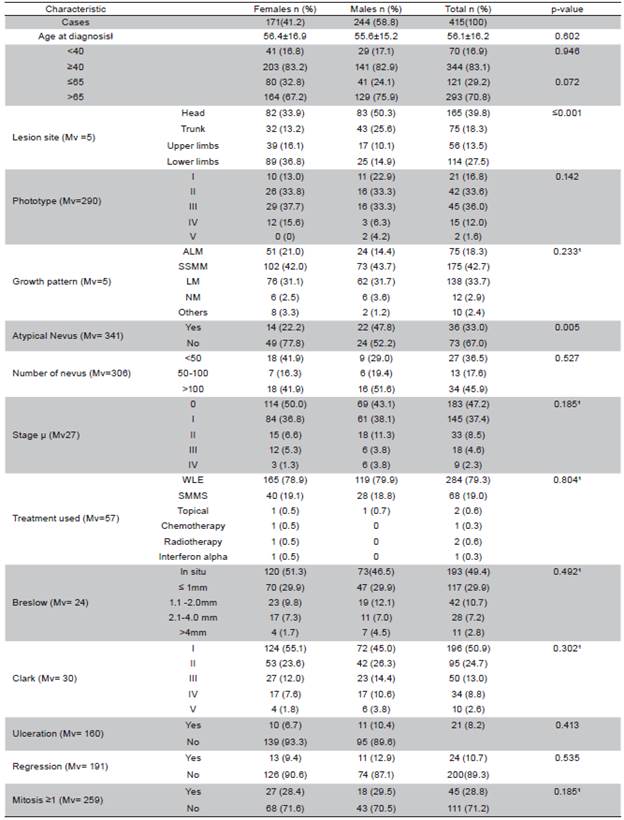 Table 3   Comparison between in situ vs. invasive CM and sex, race, age at diagnosis, growth pattern and ulceration 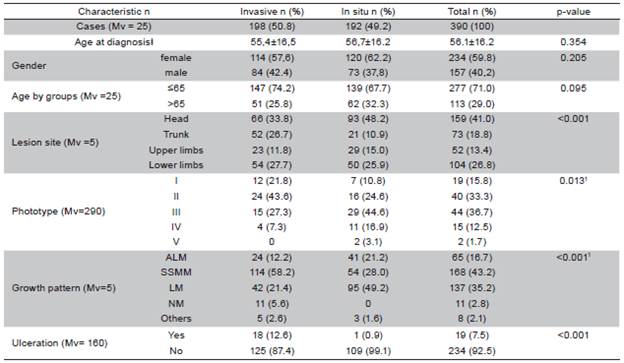