The interactions established between workers and working conditions can compromise their health. These interactions include the worker's autonomy in their job, the level of satisfaction to perform work activities, the work perspectives and safety, and the human relationships established. In addition to these aspects, the rigidity of work division,9 the division itself and the content of work tasks are factors that contribute to worker's mental suffering.13

In addition, working conditions that involve high demand, low control and lack of social support can have harmful effects on workers' physical and mental health, such as cardiovascular diseases,15 metabolic disorders4 and psychological disorders.13

Minor psychiatric disorders (MPD) are understood as symptoms such as depression, anxiety, fatigue, irritability, insomnia and memory and concentration deficit.8 Certain studies show an association between MPD and psychosocial work factors, such as high demand and low control in the job performed by nurses and nursing assistants1 and teachers.21 However, there are no data on MPD and specific working conditions of truck drivers in the literature.

Truck drivers are frequently subject to extended working hours, particularly irregular hours at night time, due to the urgency to deliver goods.11 The need to drive for many hours affects sleep, causes sleepiness at work and increases the risk of accidents.19 These workers are exposed to environmental stressors, such as road conditions and heavy traffic, and to organizational stressors, such as the type of work shift and employment relationship.18

These working conditions lead to the adoption of inadequate life habits, such as alcohol consumption and smoking, in addition to sedentary lifestyle.18 Despite its relevance, this theme has hardly been approached by studies on such professionals. In this context, the present study aimed to estimate the prevalence of minor psychiatric disorders and identify stressors associated with it in truck drivers.

A cross-sectional study was performed from March to July 2007, in which all 470 truck drivers of a cargo transportation company were invited to participate. This company has branches in the Southern and Southeastern regions of Brazil: Campinas (n=130 drivers), Rio de Janeiro (n=103), São Paulo (n=92), Belo Horizonte (n=89), Vitória (n=24), Americana (n=24) and Curitiba (n=8). A total of ten female drivers were excluded from the study. In all, 460 men, with a mean age of 39.8 years (SD=9.8), participated in this study.

Inadequate completion of certain questions of the questionnaire resulted in loss. For this reason, the results showed variations in sample size.

Workers completed the questionnaire about sociodemographic data, working conditions and information about alcohol consumption and smoking. Questions related to its completion were clarified by a field team, who were at the disposal of the drivers during the survey.

Body Mass Index (BMI) was calculated using the reported weight and height. Subsequently, this BMI was classified according to reference values, established by the World Health Organization (WHO).

The following variables were analyzed: work shift (work in the day time, night time, and both), type of employment (hired or outsourced), work task (task of transference, whose function involves transferring goods to other cities; and task of collecting and delivery of goods, which involves short-haul drivers), seniority as a professional truck driver (above and below the median - nine years), daily working hours (<10 hours or >10 hours), having suffered occupational accidents in the last year and having more than one job. These variables were selected to characterize working conditions of truck drivers, based on the results of previous studies.12

Truck drivers reported factors that caused stress in their workplace, such as traffic congestion, extensive working hours, conflicts with superiors and colleagues, working at night, and the impossibility of choosing the route and working hours, which comprised a group of variables analyzed separately.

The Self-Report Questionnaire (SRQ-20) was used to identify MPD, as this is an adequate screening instrument,6 developed by Harding et al8 (1980) and validated to the Portuguese language by Mari & Williams16 (1986). A score with seven or more positive responses identifies the presence of a minor psychiatric disorder.

Satisfaction in the workplace was investigated with the Portuguese version of the Occupational Stress Indicator (OSI), translated by Swan et al24 (1993). High and low satisfaction were classified according to the median (87 points in the present study).

Demand, control and social support in the workplace were analyzed with the Job Stress Scale, adapted and validated to the Portuguese language by Alves et al2 (2004). This scale is widely used in the Brazilian1,5 and international scientific literature.13,25 A value above the median was used to categorize high control, high demand and high social support in the workplace (18, 16 and 20 points, respectively).

Data analysis included the description of the profile of the population studied in terms of the main trend and dispersion measurements. Cronbach's alpha of questionnaires showed the following values: 0.71 (MPD); 0.70 (demand); 0.52 (control); 0.76 (social support) and 0.90 (OSI).

Simple and adjusted odds ratios were estimated, with 95% confidence intervals (95%CI). Based on the results of univariate logistic regression, variables with p<0.20 entered the multiple regression model in a decreasing order of statistical significance (stepwise forward technique).

Multiple analysis following hierarchical levels was not performed, because the effect of each variable on the outcome of MPD in truck drivers is not known. In addition, the number of cases found was small, which restricted the number of variables in each model of the multiple logistic regression.

The prevalence of MPD in the population studied was 6.1%. To suffer an accident (50.7%) and being robbed (64.4%) were the most frequently reported aspects related to fear in the workplace. The self-reported factors that most often cause stress, tension or fatigue during work were: intense traffic or congestion (52.4%), strict control of the vehicle tracking system (36.5%) and extensive working hours (28.7%). More than 70% of drivers worked for ten hours a day or more (Table 1). 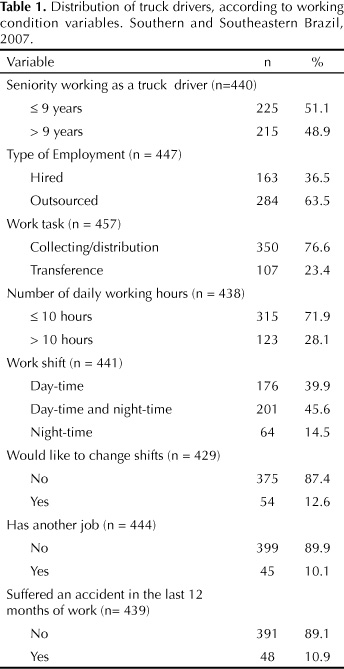 More than half (51.1%) of truck drivers reported low job satisfaction. The aspects showing the most dissatisfaction were as follows: salary according to experience and responsibility (52.5%), followed by the way in which conflicts are resolved (46.7%), communication and form of information flow in the company (46.4%), and level of participation in important decisions (46.4%). In contrast, the aspects showing the most satisfaction were the following: relationship with other people in the company (90.1%), content of the work performed (88.2%) and the level on which the worker believes to be developing their abilities (84.6%).

Approximately one third (33%) of participants were classified as experiencing high demand; 54.9%, low control; and 60.8%, low social support in the workplace. 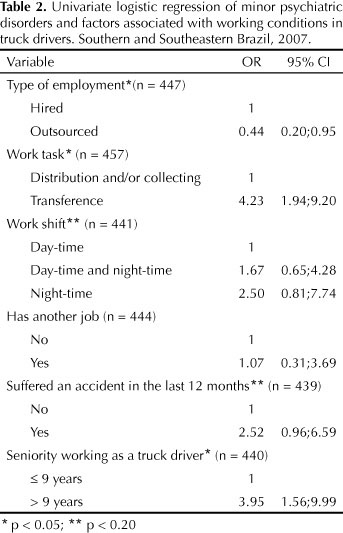 In the multiple regression model, "to work in the area of transference", i.e. the long haul-drivers, and "seniority as truck driver for more than nine years" remained associated with MPD (Table 3). 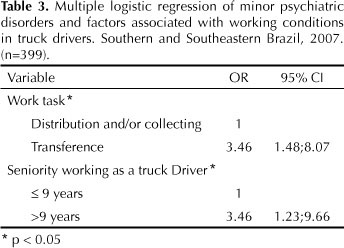 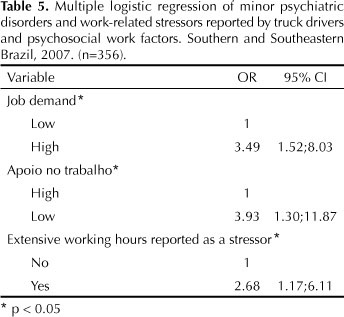 The prevalence of 6.1% of MPD in the population studied was lower than that observed in other professional categories evaluated with the same instrument, such as that of public education teachers (55.9%),21 nursing professionals (33.3%)1 and cargo transportation drivers (33.0%).3 According to Gonçalves et al6 (2008), the instrument used here for the screening and identification of MPD (SQR-20) shows high sensitivity and specificity and it is as effective as interviews conducted by professionals.

Data from other studies on the prevalence of MPD in truck drivers, estimated with the SQR-20 were not found in the literature. Using other instruments to investigate depression, Hilton et al10 (2009) reported a prevalence of 5.6% of mild depression and 4.4% of moderate depression in Australian drivers, while a study conducted by Silva-Júnior et al22 (2009) found a prevalence of 13.6% in drivers of Northeastern Brazil.

The number of truck drivers on leave of absence at the time of this study was not made available to researchers by the company studied. Probably, the low prevalence found resulted from something called "healthy worker effect". In other words, the study was conducted with healthy workers exclusively, in terms of the outcome studied, because those with a clinical diagnosis of psychiatric disorders had been on leave of absence.1 In addition, it is possible that an exclusively male population have a lower prevalence of mental disorders, once women show a prevalence of depression and anxiety two to three times higher than that found in men.14

Despite the low prevalence of MPD in the truck drivers studied, compared to other groups of workers,1,3,21 work-related factors associated with these disorders can be considered as relevant problems for these drivers. The extensive working hours reported by them as sources of stress were also associated with MPD. One of the causes of extensive working hours could be traffic congestion, which leads to delays in deliveries and collections of goods and may consequently increase the level of stress in drivers. Perhaps, for this reason, traffic congestion has been the factor most frequently reported by drivers as cause of stress, in addition to its being associated with these disorders.

Truck drivers working in the area of transference drive long distances and frequently need to stay in a city other than their home city. Social and family deprivation resulting from such trips can harm their mental health13 and the exposure to acute and chronic stress increases the level of cortisol, which is also observed in depressed individuals.20 Drivers who drive many hours have high levels of cortisol.23 In terms of the type of employment, outsourcingwork was a protective factor associated with psychiatric disorders. This same protective effect was observed by Silva-Júnior et al22 (2009) and it suggests that the greater autonomy that outsourced drivers have in the workplace may contribute to a reduction in the occurrence of psychiatric disorders. Another explanation for this result is the possibility that hiring conditions can be worse than outsourcing conditions. A study conducted with drivers from two branches of the same company revealed a greater chance of hired drivers' developing sleep apnea.12 The negative impact of hiring on the health of drivers is an indication that the employment contract alone is not necessarily better than outsourcing.

The present study did not find an association between job control and minor psychiatric disorders, contrary to what has been observed in other professional categories, such as executives25 and civil servants.7 The relationship between job control and autonomy would lead to the assumption that this factor would be associated with MPD, also working as a protective factor against stress. Thus, the results obtained in the present study show the need to further research about the autonomy and control of outsourced work.

Workers' job satisfaction depends on their own perception of working conditions.17 Once the main causes of dissatisfaction are investigated, improvements must be proposed to change work environment conditions.

Due to the association between extensive working hours and the occurrence of MPD, regulation of the number of working hours is a necessary measure to reduce the chance of developing MPD in this population.

25. Theorell T, Emdad R, Arnetz B, Weingarten AM. Employee effects of an educational program for managers at an insurance company. Psychosomatic Med. 2001;63(5):724-33.

The authors declare that there are no conflicts of interest.