Analysis of advertising material distributed through pharmacies and drugstores

A documental analysis was conducted to evaluate advertising material distributed through pharmacies and drugstores according to their compliance with Resolutions n. 102/2000 and 96/2008 of the Collegiate Board of Brazil's National Agency for Sanitary Surveillance. Brochures distributed through five pharmacies and drugstores in the city of Tubarão, Southern Brazil, were collected between May and November 2008. The 17 analyzed brochures advertised 2,444 products, of which 680 were medicines. Of these, 13.7% were controlled drugs, half of them had no registration number with the Ministry of Health and 77.9% had a registration number that did not match. Information on drug indications and safety were omitted. The results showed that the drug advertising materials were not in accordance with the aforementioned resolutions.

The pharmaceutical industry's advertising materials are targeted at prescribers, especially doctors, at consumers and at the points of dispensing, in this case represented by pharmacies and drugstores. In this context, high quality of the provided information is essential to avoid the irrational use of drugs,2,4 since this may result in the aggravation of health problems that already existed or even cause the development of diseases, leading to unnecessary expenses.2

Due to the influence of the propaganda made by the pharmaceutical industry or by institutions that commercialize these products, non-medical phenomena are becoming more and more medicalized. An example of this is the abusive stimulus to the utilization of drugs for attention deficit disorder in children and for depression treatments.3

The effects of propaganda and of the incorrect use of drugs are signaled, for example, by the growth in the number of cases of human intoxication and also in the number of deaths caused by pharmaceutical products.3

In Brazil, the Agência Nacional de Vigilância Sanitária (ANVISA - National Agency for Sanitary Surveillance) published in 2000 the Resolução da Diretoria Colegiada (RDC - Resolution of the Collegiate Board) 102,ª which regulates the dissemination of drug advertising materials in Brazil. In December 2008, RDC 96,b from the same agency, required that the drug advertising materials should have greater rigor concerning information about efficacy, demanding the inclusion of bibliographical references. In addition, after this Resolution was published, drug safety information should be highlighted in the material, with fonts of different sizes and warning phrases for some drugs.

In view of the two above-mentioned resolutions, this study aimed to evaluate the contents of advertising materials distributed in pharmacies and drug stores.

Descriptive exploratory research that used documental analysis to examine advertising materials that are distributed by pharmacies and drugstores located in the city of Tubarão, Southern Brazil.

The pharmacies and drugstores that distributed advertising materials to their customers were identified and totaled five establishments. From May to November 2008, these establishments were visited every fifteen days for the collection of the brochures distributed to the population.

The collected brochures were analyzed according to RDC 102 (2000) and RDC 96 (2008), with the adoption of the criteria presented by ANVISA for the collection and evaluation of printed drug advertising materials.c The following data were identified in the brochures: the advertised drug, the presence of indication and contraindication information, the registration number with the Ministry of Health and the presence of black label warnings. For data organization and analysis, the program EpiInfo was used.

The five establishments that distributed advertising materials belonged to chains that totaled 697 pharmacies and drugstores spread over 185 municipalities of the states of Santa Catarina and Paraná, Southern Brazil.

Overall, 17 advertising materials characterized as promotional brochures of the five pharmaceutical establishments were analyzed. They advertised 2,444 products (mean = 143.8 SD = 79.75), and the amount of advertised products per brochure ranged from 12 to 239. A total of 680 drugs were advertised by the brochures (mean = 40.0 SD = 26.04). This number refers to the total of advertised items classified as drugs, corresponding to a variation of 4 to 74 drugs per brochure. Among them, 588 (34.6 SD = 27.59) were over-the-counter drugs, 146 (8.6 SD = 7.17) were generic and 92 (5.4 SD = 8.60) were black label drugs without special control (they do not belong to the list of drugs). All the black label drugs were advertised by a single chain of pharmacies. Of the 680 advertised drugs, 654 (96.2%) were classified according to the Anatomical Therapeutic Chemical Classification System (ATC) (Table). The majority of the other drugs was phytotherapic and was not included in the ATC. The most advertised drugs are those that act in the alimentary tract and metabolism (vitamins; 16.2%), in the nervous system (analgesics in isolation or in association; 18.5%) and in the respiratory system (drugs for handling coughs and throat irritations; 14.4%). 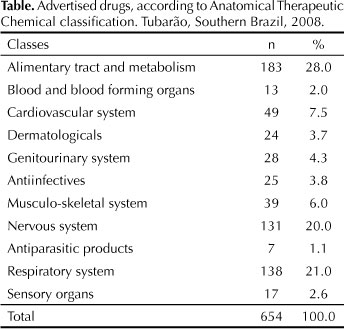 Of the total number of drug announcements, 87 (12.8%) omitted the product composition, half (340; 50.0%) did not present the registration number with the Ministry of Health and, among those that presented it, in 265 cases (77.9%) the number did not match the one that is in the ANVISA website.

As for the information required by the ANVISA resolutions, 249 drug announcements (39.6%) provided the therapeutic indication, four (0.6%) informed the adverse drug reactions (ADR) and 311 (45.7%) informed the contraindications. The phrase "contraindication in case of hypersensitivity to the formula's components" represented the main contraindication present in the brochures. Three drug announcements (0.4%) presented questionable pieces of information: two of them induced drug use and the third mentioned it was a natural product, but this type of information is prohibited by Article 4, clause X of RDC 102. b

It is important to mention that the information provided by the brochures was not confronted with the literature and that in the brochures of one of the pharmacies, drug information like registration number, indications and contraindications, was presented as footnotes and was repeated, independently of the products that were being advertised.

The advertising materials were collected in only one municipality; however, their distribution encompasses a large number of pharmaceutical establishments from many municipalities of the states of Santa Catarina and Paraná; therefore, the information reach a large number of people. So that the brochures do not induce the irrational use of drugs, it is fundamental that, at least, they are in accordance with the above-mentioned ANVISA resolutions.

The majority of the announcements were of drugs to alleviate the symptoms of common colds and influenza, like headache and cough. This is probably due to the fact that the majority of the analyzed brochures (13) were distributed during the winter months. The advertisement of vitamins, in turn, may represent a tendency towards the medicalization of the society, as described by Barros.1

An important part of the announcements referred to black label drugs without special control. All of them were advertised by the brochures of one specific pharmacy. There was no photo of these products in the brochures; therefore, perhaps the consumer would not identify them as prescription drugs. This fact goes against the resolutions considered in the present study, according to which it is forbidden to advertise black label drugs to the public. The same problem was verified in other studies.2 The antiinfective drugs for systemic use were also announced, a worrying fact due to the possibility of development of bacterial resistance because of inadequate use.4

Many announcements did not inform therapeutic indication and contraindications of the drugs. The latter, when present, were many times limited to wordings like "contraindication in case of hypersensitivity to the formula's components", without informing the specific contraindications of the drug to the different age groups or physiological states. The same occurred with the adverse reactions, which shows that the possible negative aspects of the products were omitted, a fact that was identified also in other types of drug advertisements.5,6

Announcements with incorrect information were also frequent, with wrong registration numbers and footnote information. Soares5 points to similar neglects in the production of drug advertisements.

The findings of the present study allow us to state that the drug announcements disrespect the two ANVISA resolutions, especially in relation to the information on drug efficacy and safety. Another transgression refers to the advertisement of drugs whose medical prescription must be requested at the moment of dispensing.

The results show the need for a more efficient control of the information published in advertising brochures of pharmacies and drug stores.