HIV prevalence in pregnant women and vertical transmission in according to socioeconomic status, Southeastern Brazil

The epidemic is growing among women, characteristic of the feminization of AIDS.9,ª Since people of reproductive age are most affected by the infection, the number of children infected by vertical transmission (VT) is high. Vertical transmission involves the transmission of the virus from mother to child, during gestation, birth or breastfeeding.7,11,b

The probability of VT can reach 25.5% without any intervention, but preventative interventions can reduce the transmission level to between zero and 2.0%. 7,b A study in 2009, with a representative sample of pregnant Brazilian women between ages 15 and 49 years, reported an HIV prevalence of 0.42% at delivery, which corresponds to 13 thousand infected women in 3 million annual pregnancies.17 In Espírito Santo State (Southeastern Brazil), from 1985 to 2008, 329 AIDS cases were reported among children age less than 13 years, with VT responsible for 310 (94.2%) cases.c In the capital Vitória, a 2005 study reported a VT rate of 3.1%.15

Understanding the distribution of HIV-infected pregnant women in the community is necessary to estimate risk of VT and guide preventive measures. Inclusion of geographic information in the study allows for visualization of the spatial distribution of cases and improves analysis of relationships between environment and development of infections.1-3 The study objective was to describe the relationship between HIV infection in pregnant women and VT, according to socioeconomic profile of the mother's residential neighborhood.

An exploratory ecologic study was performed in Vitória, between 2000 and 2006. The city has a land area of 93,381 km2 and is divided in 79 neighborhoods, which were the unit of analysis.

Population information was obtained from the Municipal Health Secretary of Vitória (SEMUS) and from the Instituto Brasileiro de Geografia e Estatística (IBGE - Brazilian Institute of Geography and Statistics), from the 2000 Census. Socioeconomic information was summarized by the Urban Quality Index (IQU) developed by the Institute of Study, Training and Assistance in Social Sciences.d It is a descriptive and quantitative indicator composed of various simple indicators, expressed on a scale of 0 to 1, where larger values indicate better quality of life. The index was categorized as low (IQU under 0.54), medium (IQU between 0.54 and 0.62) and high (IQU equal to or greater than 0.63).5,d

Epidemiologic data was obtained from forms reporting HIV-positive pregnant women. Data of children less than 13 with an AIDS diagnosis was obtained from the respective reports. These cases were linked to cases of mothers, by searching reports of HIV-positive pregnant women in the period from 2000 to 2006. These data were made available by SEMUS, using notification/investigation forms from the Sistema de Informações de Agravos de Notificação (SINAN - Information System of Notifiable Conditions). Data was entered in an electronic worksheet on Excel®, and prevalence rates were calculated with Stata version 9.0.

Spatial distribution of events was performed with geoprocessing software TerraView 3.2.0, and the unit of analysis corresponded to neighborhoods in the municipality, whose limits are well-defined.e

To evaluate the association between IQU and prevalence of HIV-infection in pregnant women, Poisson regression was performed with Stata 9.0. To relate IQU of residential neighborhood with reports of AIDS in children less than 13 years, it was necessary to perform two analysis: one considering 14 reports and the other considering seven.

The study was approved in May 2008 by the Ethics Committee of the Health Sciences Center of the Universidade Federal de Espírito Santo, and access to the database was authorized by SEMUS (process No 490/2008). In data worksheets, cases were only identified by a registry code, to preserve confidentiality and privacy. 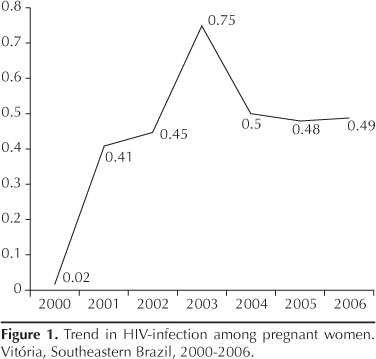 During the study period, 14 cases of HIV infection from VT were reported in children, of which only seven had mothers reported as HIV-positive. The two VT rates calculated were 9.7% and 5.0%. The first rate considered the 14 children against 144 (137 + 7 unreported mothers); the second rate used the seven reported children and 137 mothers as the denominator. 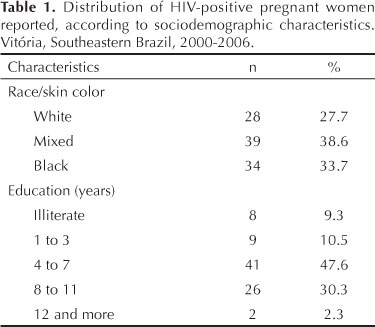 Average age of children at time of notification was 18 months (SD 14.2). Only nine (64.3%) had information for race/color (two white, three black and four brown).

IQU distribution by neighborhoods in Vitória was heterogeneous, with low and high IQU neighborhoods next to each other (Figure 2).

Between 2000 and 2006, HIV infection in pregnant women was reported in the majority of neighborhoods in Vitória, although at different prevalence (Figure 3). Six neighborhoods had very high prevalence (Universitário 2.35%, Monte Belo 2.29%, São Pedro 2.01%, Ilha do Príncipe 1.51%, Piedade 1.23% and Cruzamento 1.49%). Jardim da Penha and Jardim Camburi presented the lowest rates, 0.13% and 0.12% respectively.

The spatial distribution of children infected by VT (Figure 4) reveals greater frequencies in neighborhoods of lower urban quality. Considering the 14 notifications, of ten neighborhoods with VT only three (30%) had high IQU.

Poisson regression shows an inverse association between the IQU variable and prevalence rate of HIV-infection in pregnant women (Table 2): the lower the IQU level, the greater the infection prevalence among pregnant women.

An HIV prevalence of 0.44% was found among pregnant women in Vitória, similar to the rate in Brazil, which estimate among pregnant women was 0.41% in 2004.17 Studies in other states in Brazil and in Vitória report rates from 0.42% to 0.50% 6,8,12,15 Nonetheless, prevalence in the current study is less than the 0.6% found in public maternity hospitals of Vitória by Miranda et al.13 The difference may be to the fact that these maternities attend pregnant women from other municipalities in the state.

Although Vitória has a prenatal care rate of approximately 95%, a previous study14 reported that the quality of prenatal care in municipal public maternities was unsatisfactory, with difficulty to reduce the proportion of caesarian sections even in maternities that principally care for low risk women, with a low enrollment rate in the low income population and less than six prenatal visits recommended by the Ministry of Health. In addition, non-performance of prenatal care was associated with low education, single marital status and premature birth.14 The low quality of care may reflect difficulty in early detection of HIV-positive mothers and introduction of prophylaxis to prevent VT, which may be responsible for the high VT rate identified by the present study.

The epidemic dynamic in Vitória is similar to Brazil, with similar rates of VT and HIV-infection among pregnant women. In addition, in neighborhoods with low IQU, based on level of education among pregnant women, prevalence was higher, indicating a pauperization of AIDS.4,10,11 Use of neighborhood as the unit of analysis emphasized the internal differences in the city and its social and epidemiologic processes, with a tendency for an increased epidemic among women located in poorer neighborhoods, as in a study performed in Rio de Janeiro State (Southeastern Brazil).19

The main study limitation was the quality of data available in databases of HIV in pregnant women and of AIDS in children less than 13 years, which were shown to be incomplete and inconsistent. The greatest obstacle was the discrepancy between the databases, with seven mothers unreported in Sinan due to under-notification of HIV-positive pregnant women and a consequent under-estimation of the VT rate. Due to the importance of these indicators, it is urgent to improve notification by linking each child infected by VT with the respective notification of their HIV-positive mother. In addition, the small number of events may have impacted data analysis due to the substantial amount of neighborhoods with no events.

Neighborhood socioeconomic condition, summarized by the IQU, was associated with HIV prevalence among pregnant women in the current study. Geoprocessing improved visualization of cases, revealing concentrations in neighborhoods with lower urban quality, allowing municipal managers and health professionals to act aggressively in the most vulnerable areas.