OBJECTIVE: To assess overall survival of women with cervical cancer and describe prognostic factors associated.
METHODS: A total of 3,341 cases of invasive cervical cancer diagnosed at the Brazilian Cancer Institute, Rio de Janeiro, southeastern Brazil, between 1999 and 2004 were selected. Clinical and pathological characteristics and follow-up data were collected. There were performed a survival analysis using Kaplan-Meier curves and a multivariate analysis through Cox model.
RESULTS: Of all cases analyzed, 68.3% had locally advanced disease at the time of diagnosis. The 5-year overall survival was 48%. After multivariate analysis, tumor staging at diagnosis was the single variable significantly associated with prognosis (p<0.001). There was seen a dose-response relationship between mortality and clinical staging, ranging from 27.8 to 749.6 per 1,000 cases-year in women stage I and IV, respectively.
CONCLUSIONS: The study showed that early detection through prevention programs is crucial to increase cervical cancer survival.

Cervical cancer is one of the most common cancers worldwide, the sixth in incidence and the third leading cause of death among women.16 Most cases (80%) are reported in developing countries in Africa, Latin America and the Caribbean, and they are relatively uncommon in Europe, Israel and the US.ª In Brazil, cervical cancer is the second leading cause of death due to cancer in women. The Brazilian Ministry of Health estimated approximately 18,430new cases in 2010b with 4,315 deaths confirmed in 2008.c

The major prognostic factor of cervical cancer is tumor staging. Tumor staging according to the International Federation of Gynecology and Obstetrics11 (FIGO) staging system is directly associated with risk of recurrence and overall survival. It assesses the primary tumor size, local extension, invasion of adjacent structures, and presence of distant lesions. However, the FIGO staging system does not assess several other factors such as age, skin color, socioeconomic condition and histopathological type of tumor, which have also been reported as prognostic factors.7,d

There is a clear relationship between the extension of disease at diagnosis (tumor staging) and disease-associated mortality. This is the basis for screening programs,10 which can effectively detect pre-invasive or early stage disease and thus reduce associated morbidity and mortality.1,11,e

The Brazilian National Cancer Institute (Instituto Nacional do Câncer - INCA) is a reference center for cancer prevention and control in Brazil. The INCA serves both the metropolitan area of the city of Rio de Janeiro and the rest of the state. In 2003, of 896 cases of cervical cancer diagnosed in the city of Rio de Janeiro, and 2010 cases in the state,f 597 patients were attended at the center.

A retrospective study with data obtained from INCA registries was conducted. All cases of primary cervical tumors diagnosed from 1999 to 2004 were assessed. Since 1999 the Hospital do Câncer 2 (HC2), one of the four INCA units, is a reference center for all gynecologic cancer cases.

The chi-square test was used to assess the association between tumor staging and the independent variables.

For estimating survival, all deaths during the study period were considered events; the remaining cases were censored at the last hospital visit on November 2006. Data on deaths were collected from the hospital registry and the Brazilian Mortality Database (SIM). Kaplan-Meier curves were used to analyze overall survival and the log-rank test was used for comparing survival curves.

The study was approved by INCA Ethics Commitee on Research (Process nº 52/2006).

A total of 3,341 patients with primary cervical tumors were attended at INCA during the study period, of which 68 were excluded due to missing information. The maximum follow-up time was 94.0 months (median 28.1 months).

Patients with locally advanced disease (FIGO stages II and III) were treated with radiation therapy (69.8%). Combined radiation therapy and chemotherapy (weekly cisplatin) was used in 21% and it is important to note that beginning in 2004 this standard of care changed (78.5% received combined treatment).

Table 1 shows case distribution according to clinical and epidemiological characteristics by stage. Overall, missing data were minimal (age in one patient, skin color in 2, and level of education in 4 patients). Most patients were white, <65 years of age, and poorly educated. The most prevalent histological type of tumor was squamous cell carcinoma (84.5%). Locally advanced disease (stages II and III) was seen in 68.3% of the cohort. Most cases were followed-up for at least two years (80.7%), and 1,499 deaths were recorded (50.1% of cases). Deaths occurred more often in the first two years of follow-up (71.2%) and at stages II or III (84.9% of all deaths).

The chi-square analysis showed that the number of patients with 11 years of schooling or more was significantly greater at stages I and II (p<0.001), although they accounted for a small proportion of the cohort. Despite slight predominance of white patients, no statistically significant difference was seen in the distribution of cases by stage (p=0.168). Squamous cell carcinoma was most commonly seen at FIGO stage III while adenocarcinoma and adenosquamous carcinoma (plus other histological types) were more often seen at early stages (p<0.001). Year of diagnosis was not statistically significant (p=0.144) in this analysis.

Figures 1 and 2 show the Kaplan-Meier curves. The median survival for the entire cohort was 53.4 months (95% CI 47.65;59.20) and the 5-year overall survival was 48%. A significant difference was found in median survival between the two age groups studied (62.6 vs. 41.3 months, higher in the younger age group; p=0.016; Fig. 1.A). Although not significant, non-white women showed better survival compared with white ones (56.43 vs. 49.46 months; p=0.04; Fig. 1.B). As for level of education (Fig. 1.C), those with 11 years of schooling or more showed a significantly better survival (median survival has not yet been estimated for this subgroup). The median survival for those with lower education was 49.9 months, p<0.001. The histological type of tumor (Fig. 1.D) was not statistically different in terms of survival as survival curves were very similar (p=0.09). There was a clear relationship between tumor staging at diagnosis and survival (Fig. 2), i.e., greater survival rates were found at stage I (no median survival estimated), and progressively reduced at more advanced stages (65.6 months, 21.7 months and 10.4 months for stages II, III and IV, respectively; p<0.001).

In the multiple logistic analysis using Cox model only tumor staging remained statistically significant (p<0.001) (Table 2) while all other variables from the univariate analysis lost their statistical significance. 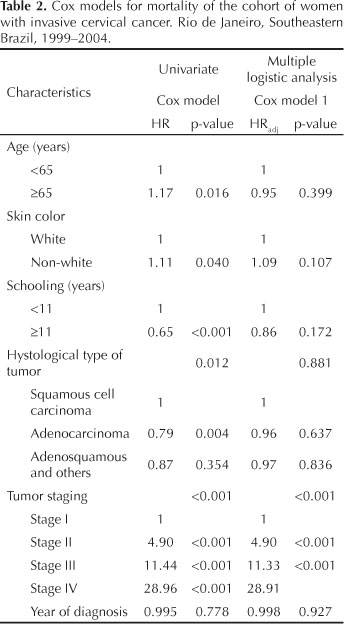 The case-fatality rate in Table 3 showed a dose-response effect between mortality and clinical stage, ranging from 27.8 to 749.6 per 1,000 cases-year in women at stages I and IV, respectively.

According to the American Cancer Society, the 5-year overall survival in the US is 72%.h Population-based studies have reported cancer survival rates of 62.5% in the United Kingdomi14 and 58% in Australia.1

This scenario is significantly worst in less developed regions. Although data from the 1980s in Cuba showed a 53.5% 5-year overall survival, lower rates have been reported in some cities in Asia: 46.5% in Bombay, India; 37.5% in Qidong, China; and 24.6% in Rizal, Philippines.1

Low socioeconomic condition has been associated with poor prognosis in cervical cancer.5,7,9 In our study level of education was a proxy of socioeconomic condition and there were two major findings: more educated women were a small minority (9.4%) of the cohort studied and they had a 35% reduction in the risk of death when compared with those less educated. However, this difference fell a non-significant 14% in the multiple logistic analysis. This association may be explained by the fact that more educated women usually seek health care and have more knowledge on prevention and thus their disease is detected at an earlier phase with more successful treatment. However, in the multiple logistic analysis, the clinical magnitude of the difference between level of education (HR 0.86) remained after adjustment, despite losing its statistical significance.

Data from hospital registries in Japan have showed that older age is associated with a poorer cancer survival, even after adjusting for tumor stage, and this finding is also associated with more effective screening at younger ages (<45 years).9 Another study has argued there are adverse biological factors that may cause a more aggressive course.11 However, the North American Surveillance, Epidemiology and End Results Program (SEER) did not find any significant difference after adjusting for other causes of death and life expectancy when assessing case-fatality rate due to cervical cancer in different age groups.8 In the present study, although advanced age was also associated with a poorer prognosis (HR = 1.17) in the univariate analysis, this association disappeared in the multiple logistic analysis. The high prevalence of locally advanced cancer at advanced ages may have contributed to a poorer survival in the univariate analysis.

A trend towards a worse prognosis has been reported for the histological types adenocarcinoma and adenosquamous carcinoma compared with squamous cell carcinoma,3,11 although this same trend was not seen in the multiple logistic analysis in our study. One plausible explanation may be the small number of patients with adenocarcinoma and adenosquamous carcinoma subtypes, which were most commonly seen at early stages. Another factor possibly associated is the use of more aggressive treatments in these cases (adjuvant radiation therapy), which may have contributed to increased survival. However, this is not completely understood, and the presence of residual confounding cannot be ruled out.

According to the SEER,3 white women are diagnosed at earlier stages and have a more favorable prognosis when compared with black ones (HR = 1.35). This is mainly attributed to unequal access to health care and different treatment provided.4,6 In our cohort, in the multiple logistic analysis there was no significant survival difference between white and non-white women. Given the greater number of white compared with non-white patients, it should be emphasized that, according to the 2003 National Household Survey (PNAD),j white women accounted for 61.4% of the population in the state of Rio de Janeiro, which may partially explain this difference.

Early screening and tumor staging were the main prognostic factors in the population studied. Although age and level of education had an effect in the univariate analysis, it disappeared in the multiple analysis, suggesting an independent effect of staging. This finding is consistent with the literature and confirms tumor staging as the main prognostic factor in cervical cancer.11 The prognostic significance of staging becomes more evident when the case-fatality rate at each stage is estimated.

The study limitations are related to the retrospective design and use of secondary data with no further details on treatment, such as delayed or prolonged radiation therapy and surgical procedures. Selection bias is unlikely to have affected the results because most women in the cohort were followed up for at least two years. Lead-time bias was not likely as approximately 70% of the cases were locally advanced.

This study is probably not representative of the national reality of cervical cancer given that there are wide socioeconomic differences among Brazilian macroregions (especially the North and Northeast regions).[8] However, the results of our study are representative of the metropolitan area of Rio de Janeiro and, to a lesser extent, of the Southeast region. The 48% 5-year overall survival, compared with more developed countries like the US (72%),1 indicates a less favorable outcome consistent with that of developing countries.1

The low overall survival found at the INCA may be attributed to delayed combined treatment (radiation therapy plus chemotherapy, the standard care for locally advanced disease). With poorer prognosis at more advanced stages, it is remarkable the disproportionate high number of cases with locally advanced stages (85%, 51% and 24% at stages I, II and III, respectively), slightly lower rates than those reported in the US and UK.2,4

Further studies with longer follow-up are needed to explore improvement in specific-stage survival benefit with the recent introduction of chemotherapy plus radiation therapy as the standard care for locally advanced cancer. There is also a need for mass campaigns and prevention programs for adequate cancer management so to achieve a plateau in overall survival similar to that seen in developed countries.