Mental health problems and smoking among adolescents from Southern Brazil

OBJECTIVE: To analyze the association between mental health problems and smoking in adolescents.
METHODS: A total of 4,325 adolescents aged 15 from the 1993 birth cohort of the city of Pelotas, Southern Brazil, was studied. Smoking was defined as having smoked one or more cigarettes in the previous 30 days. Mental health was assessed according to the total score of the Strengths and Difficulties Questionnaire. Score > 20 points was considered positive. Data were analyzed using Poisson regression with adjustment for robust variance.
RESULTS: Smoking prevalence was 6.0% and about 30% of the adolescents presented some mental health problem. In the crude analysis, the prevalence ratio for smoking was 3.3 (95%CI 2.5; 4.2). After the adjusted analysis (for sex, age, skin color, family income, mother's level of schooling, group of friends who smoke, employment in the previous year, school failure, physical activity during leisure time and experimental use of alcohol), it decreased to 1.7 (95%CI 1.2; 2.3) among those with mental health problem.
CONCLUSIONS: Mental health problems in adolescence may be related to tobacco consumption.

Smoking is considered a public health problem and is related to 50 different incapacitating diseases. It is responsible for an average of 200 thousand deaths per year in Brazil and surpasses the sum of deaths caused by alcoholism, aids, traffic accidents, homicides and suicides.ª

Smoking onset occurs, on average, when the person is between 12 and 13 years of age, at the beginning of adolescence, a period of numerous physiological, behavioral and psychosocial transformations.ª These transformations can make adolescents become more susceptible to the adoption of behaviors which weaken their health, such as sedentariness, smoking, and alcohol and drugs consumption.

The Pesquisa Nacional de Saúde do Escolar (PeNSE National Survey of Students' Health),b carried out in 2009 with students of the 9th grade of elementary school (13 and 14 years of age), in Brazil's 26 state capitals and in the Federal District, showed that 24.2% of the students had smoked at least once in their life, and the current use of cigarettes (measured by consumption in the previous 30 days, independently of frequency and intensity), was 6.3%. The smoking prevalence in this study is in accordance with the findings of research with adolescents from the city of Pelotas, Southern Brazil, considering the different ages that were evaluated. Members of the 1993 birth cohort, visited at 11 years of age, reported a 3.7% prevalence of experimental use of tobacco.19

Cohort studies show that psychopathology precedes the development of smoking in adolescents.3,5,21 Conduct disorders,3 attention deficit/hyperactivity disorders10 and delinquent behavior are the problems that are most frequently associated with smoking.7

Cross-sectional analysis nested in the 1993 birth cohort study of Pelotas, state of Rio Grande do Sul. The municipality of Pelotas, in the South of Brazil, presents an estimated population of 345,181 inhabitants.b

The 1993 cohort recruited the live births of the urban area of the city (N = 5,249). Participants and relatives were followed up in different moments. Further details can be consulted in a published paper.23 The information used in the present study was collected in the 2008 follow-up (N = 4,325), when the participants were 15 years old.

The outcome was defined as having smoked one or more cigarettes in the previous 30 days.17 The Strengths and Difficulties Questionnaire (SQD),12 which measures the adolescent's emotional and behavioral characteristics, was administered to the mothers to identify the adolescents' mental health problems. The screening instrument validated for use in Brazilian children and adolescents9 has 25 questions and encompasses five subscales (prosocial behavior, hyperactivity/inattention, emotional symptoms, conduct problems and peer relationship problems). The options of answers are: not true, somewhat true, certainly true, and each item receives a specific score. The sum of each subscale and the total sum enable the classification of the individual in three categories: normal behavior (0-15 points), borderline behavior (16-19 points) and abnormal behavior (20-40 points). In almost all the subscales (except for prosocial behavior), the higher the score, the higher the number of symptoms.12 To build the total score of SDQ, four subscales are added: hyperactivity/inattention, emotional symptoms, conduct problems and peer relationship problems.

The variables used to control for confusion included demographic, socioeconomic and behavioral factors. The variables were operationalized as follows: sex (female; male), skin color (white; non-white); adolescent's age (continuous); mother's level of schooling (years of study: 0 to 4; 5 to 8; 9 to 11; 12 or more); family income (minimum salaries, in quintiles). The answers of other variables were dichotomized in yes/no (group of friends who smoke, experimental use of alcohol, group of friends who drink alcohol, episodes of failure at school, employment in the previous year and practice of physical activity during leisure time in the previous week).

A descriptive analysis of the sample and subsequent bivariate analysis with Pearson's chi-square test were carried out. A crude Poisson regression model with robust adjustment of variance was proposed. A significance level of 95% was defined for the associations. The variables with p < 0.20 in the bivariate analysis were considered possible confounders and were included in the multivariable analysis. The study's sample had an 80% power to detect a minimum prevalence ratio (PR) of 1.2.

An informed consent document was signed by the mothers and/or guardians of the adolescents. The project was approved by the Ethics and Research Committee of the School of Medicine of Universidade Federal de Pelotas (official letter no. 158/07).

Smoking prevalence was 6.0%. Almost one third of the adolescents presented some kind of problem related to mental health (abnormal behavior), according to the total score of the SDQ. Among the SDQ subscales, the highest prevalences of mental health problems were found in the emotional (38.0%), conduct (26.7%) and peer relationship (25.8%) domains (Table 2). 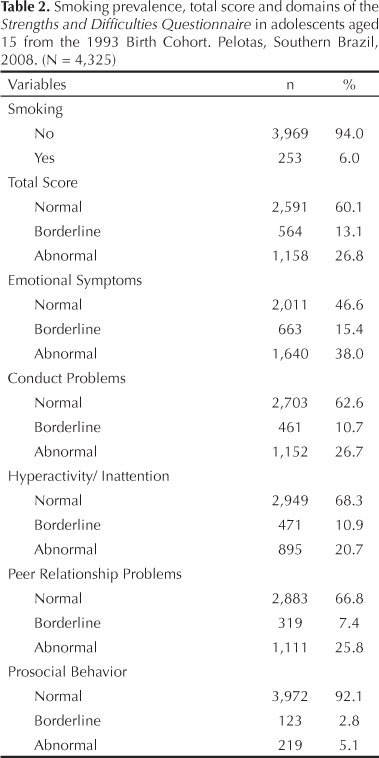 Smoking prevalence within the category of abnormal behavior was 10.9% compared to 3.3% in the reference category (p < 0.001) (Figure). 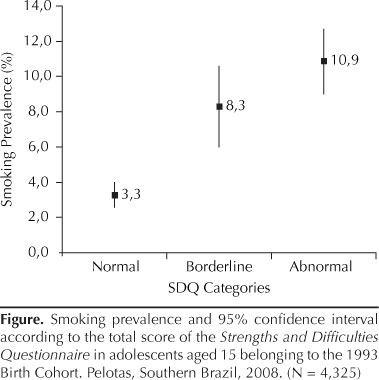 In the crude analysis, smoking was 2.5 (95%CI 1.8;3.5) and 3.3 (95% CI 2.5;4.2) times more prevalent in adolescents who presented borderline and abnormal SDQ scores, respectively, when compared to the adolescents with normal SDQ scores (p < 0.001). After adjusting for possible confounding variables, a significant association was maintained between smoking and the general SDQ score (p < 0.001). The prevalence ratio was reduced to 1.8 (95% CI 1.2;2.6) and 1.7 (95% CI 1.2;2.3) in adolescents categorized as presenting borderline and abnormal behavior, respectively (Table 3). 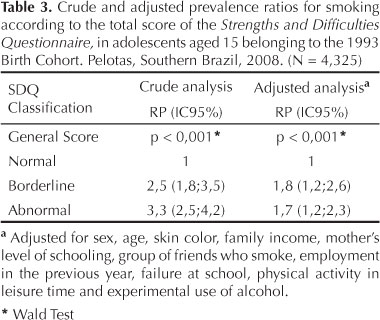 In the present study, an association was found between mental health problems and smoking, and the individuals classified as having abnormal behavior by the SDQ presented higher smoking prevalence when compared to the individuals classified as normal. We chose the total SDQ score because it is a global psychopathology measure which focuses on adolescents who present at least one mental health problem, without specifying the type.

Some methodological limitations may have affected the findings. It is known that administering the SDQ to many informants can increase the instrument's specificity.13 In the present study, the SDQ was administered only to the adolescents' mothers, which might underestimate the prevalence of emotional problems, like depression and anxiety, and overestimate conduct and inattention/hyperactivity problems. Another limitation is the absence of information on parents' smoking habits in this follow-up of the cohort, which might be considered a confounding factor, according to the literature.17 However, in a separate analysis adjusting for maternal smoking habits, the association between mental problems and smoking remained significant (the data were not presented).

The smoking prevalence detected in this study (6.0%) was similar to the one found in the PeNSE study,b but it is lower than the one reported in another study with adolescents from Pelotas (16.6%).16 Research conducted with adolescents aged between 13 and 15 years in Florianópolis, Porto Alegre and Curitiba (Southern Brazil) found smoking prevalences of 10.7%, 17.7% and 12.6%, respectively.15 The lower prevalence found in the present study can be the result of the lower age of the studied individuals, but also of a possible underreport of cigarette consumption. Smoking prevalence may be underestimated in the present study because, despite the confidentiality of the questionnaire, adolescents not always tell the truth concerning the use of cigarettes. In a study with students from Pelotas aged 13 and 14 years, smoking prevalence was evaluated by means of a questionnaire and by the measure of cotinine in the urine, and an important underreport compared to the gold standard was detected.18

The prevalence of individuals classified as having abnormal behavior was 26.8% and as having borderline behavior, 13.1%, according to the total SDQ score. Such prevalences can be considered high, but they were similar to the ones found in epidemiological studies that used the SDQ, parents version, in Brazilian children and adolescents9 and lower than the one found in the birth cohort of São Luís (Northeastern Brazil).20

Studies conducted in the United States and in the United Kingdom have shown an association between smoking and specific psychiatric disorders like anxiety, depression, conduct and hyperactivity/inattention problems.1,2,5 These studies used several instruments or questionnaires based on clinical criteria to make the diagnosis of these psychiatric problems in adolescents.

Although there are studies that confirm the association between mental health problems and smoking, there is no consensus about the direction of this association. Some studies have shown that mental health problems determine smoking;1,6 another study has shown the inverse relationship.11 Cohort studies have shown that psychopathology is an important predictor of smoking in adolescents.3,5,21

The exact mechanism of the co-morbidity between smoking and psychiatric disorders is not known, but it might be explained by the combination of one or more of the following factors: opportunity, self-medication, vulnerability (familial/genetic or environmental) and neurobiological alterations that are common to psychiatric disorders and smoking.22 Nicotine can act to alleviate the symptoms, like attention enhancement, in individuals with inattention and hyperactivity.1

Our study showed that psychopathology can be considered a marker for tobacco use in adolescents. Smoking prevention can benefit from the identification and treatment of adolescents who present possible mental health problems. Prospective studies are important to elucidate the emergence of mental health problems in earlier ages. This may confirm the direction of the association between such problems and cigarette use and contribute to plan interventions against smoking.

This paper is based on data from the study "1993 birth cohort of Pelotas", carried out by the Postgraduate Program in Epidemiology of Universidade Federal de Pelotas. The visit at the age of 15 was financed by the Wellcome Trust Initiative (process 072403/Z/03/Z).
The authors declare that there are no conflicts of interests.
a Instituto Nacional do Câncer - INCA. Tabagismo: um grave problema de saúde pública. Rio de Janeiro; 2007.
b Instituto Brasileiro de Geografia e Estatística - IBGE. Pesquisa Nacional de Saúde do Escolar 2009. Rio de Janeiro; 2009.