Counterfeiting of drugs in Brazil

OBJECTIVE: To identify the main counterfeit drugs seized by the Brazilian Federal Police and the states where seizures have been made.
METHODS: A retrospective descriptive study on expert reports produced by criminal investigators of the Federal Police between January 2007 and September 2010, in relation to counterfeit drugs, was carried out.
RESULTS: The drugs with greatest numbers of seizures were selective phosphodiesterase-5 inhibitors that are used for treating male erectile dysfunction (Cialis® and Viagra®, mean = 66% ), followed by anabolic steroids (Durateston® and Hemogenin®: 8.9% and 5.7%, respectively). The greatest proportions of the counterfeit drugs were seized in the states of Paraná, Santa Catarina (both Southeastern Brazil) and São Paulo (Southeastern), and the number of non-authentic drugs sent for investigation increased by more than 200% over the study period. There were increases in seizures of smuggled drugs found together with counterfeit drugs: 67% of the seizures included at least one smuggled drug.
CONCLUSIONS: Counterfeiting of drugs is a severe public health problem. Identification of the classes of counterfeit drugs present in Brazil and the main Brazilian states with this problem may facilitate future preventive and suppressive actions by the Brazilian bodies responsible for such actions.

Counterfeit drugs are those whose identity and/or origin have been deliberately and fraudulently altered, according to the World Health Organization (WHO). Counterfeiting encompasses reference, similar or generic products and may include products with composition similar to that of authentic products, without active components, with insufficient active components or with other drugs replacing the usual active agents. This practice affects both developed and developing countries and may cause loss of confidence in the drugs, healthcare systems, healthcare professionals and pharmaceutical industry.ª

Counterfeiting occurs to a greater extent in regions where regulations and application of systems for drug supervision are less rigid.b,c

The trade in counterfeit drugs is lucrative and, for this reason, very attractive for criminal networks. According to a report released by the Center for Medicine in the Public Interest, in the United States, sales of counterfeit drugs reached US$ 75 billion in 2010, which was a 92% increase in relation to 2005.b According to WHO, the important factors contributing towards this practice include lack of appropriate legislation, deficient supervision, weak penal sanctions, situations of greater demand than supply and high prices.ª

A significant increase in seizures of counterfeit drug was observed in Brazil over the past decade. According to the Agência Nacional de Vigilância Sanitária (ANVISA - National Agency for Sanitary Surveillance), drugs for treating sexual impotence are the main type of counterfeit drug seized.d However, little information on this topic has been published by the Agency.

Counterfeiting of products destined for therapeutic or medicinal purposes, irregular importation and sales in unauthorized places not only are infractions of sanitary laws, but are also crimes against public health that are cited in Law No. 9677/98,e and are subject to fines and the penalty of imprisonment for 10 to 15 years,3,e served initially under a closed regime.f

Ordinance No. 2814 of the Ministry of Health, of May 29, 1998, determines that the quality of drugs should be ensured and that companies putting counterfeit, adulterated or fraudulent drugs on the market should be punished.g

The Federal Police has important information on seizures of counterfeit drugs in Brazil that can be compiled and organized to describe the problem of such drugs. This information is contained in the Criminalist System, which is a national database of digitized expert reports. Analysis on these data could provide a broader picture of drug counterfeiting in Brazil through data on seizures made by the Federal Police. This could make it possible to plan preventive and suppressive actions for implementation by the police and sanitary authorities.

Given the problem of drug counterfeiting, the lack of official information and the difficulty in controlling this trade, this study had the aim of identifying the drugs that are targets for counterfeiting in Brazil and the states where seizures have been made.

This was a retrospective study using information from expert reports produced by the Federal Police. Reports on counterfeit drugs in the Federal Police's Criminalist System dated January 2007 to September 2010 were accessed. These data were produced by expert units in different Brazilian federal states.

The reports were accessed individually through the Federal Police's intranet. The following information was gathered: state in which the seizure was made; commercial name of the drug; active agent and dose indicated on the packaging; active agent and dose found in laboratory tests; and presence of other irregular drugs in the same seizure.

Data from reports in which the experts declared that the drugs were counterfeit based on visual examination, laboratory tests and consultations in the ANVISA database were included.

The information were grouped in electronic spreadsheets and organized according to pharmacological class, type of active agent and state where the seizure took place.

Seizures of counterfeit drugs generated 42 requests for expert reports in 2007, 84 in 2008, 132 in 2009 and 113 up to September 2010, thus totaling 371 reports and 610 drugs that were declared counterfeit after laboratory and visual analyses by federal criminal investigators (Table 1). The number of counterfeit drugs sent for expert examination increased by more than 200% between January 2007 and December 2009. Up to September 2010, this increase was more than 100%. Out of the total number of reports, 80% included counterfeiting of the drugs Cialis® and/or Viagra®.

Among the counterfeit drugs, 69% belonged to the category of selective phosphodiesterase-5 inhibitors (PDE-5), better known as drugs that assist in treating male erectile dysfunction (Viagra® and Cialis®), followed by anabolic steroids (Durateston®, Hemogenin® and Deca Durabolin®, accounting for 26.0% of the seizures), prostaglandin inhibitors (Cytotec®; 3.5%) and other drugs (Glivec®, Xenical®, Peb one® and Peb two®; 0.7%).

Paraná, São Paulo and Santa Catarina were the states where the largest numbers of seizures of counterfeit drugs for treating erectile dysfunction and tests on these drugs were made (around 50.0%) (Figure 2A). 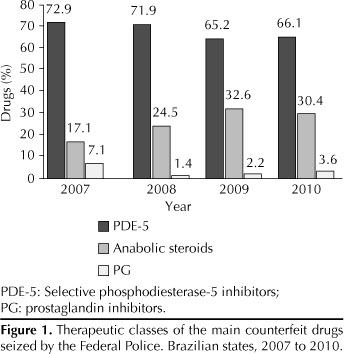 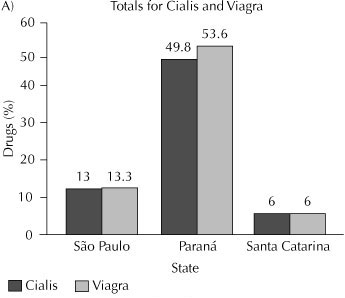 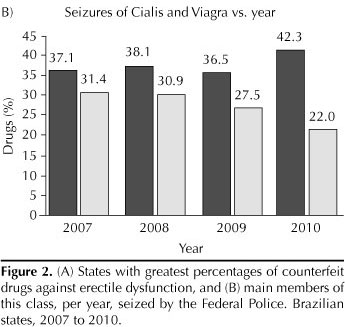 Out of the 401 counterfeit Viagra® and Cialis® seizures, 372 were subjected to complete chemical tests. A large proportion of the Cialis® samples contained the active agent sildenafil citrate instead of tadalafil, its original constituent (Table 2). Some of the samples did not present any active ingredient. 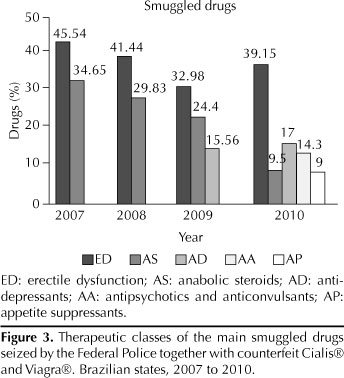 The main counterfeit drugs seized by the Federal Police between 2007 and 2010 were drugs against erectile dysfunction and anabolic steroids. These data confirm the information released by ANVISA that the counterfeit drugs with the largest number of seizures in Brazil over recent years belong to these therapeutic classes.h This can be explained by the greater demand for these pharmaceutical groups among the Brazilian population and by their high prices.

This predominance is not replicated in countries like the United States, where the Pharmaceutical Security Institute recorded increases in counterfeiting of dietary therapeutic products (57%), anti-infection agents (48%), agents acting on the musculoskeletal system (35%), cytostatic agents (32%), agents acting on the central nervous system (28%) and agents against cardiovascular agents (23%) in 2009.i

The Brazilian states that presented the greatest quantities of counterfeit drugs seized by the Federal Police were in the southern and southeastern regions, which are affected by trade in counterfeit products. The port of Santos, where such drugs may enter Brazil, is located in the state of São Paulo. Paraná is located in the region of the triple frontier (Argentina, Brazil and Paraguay), which makes it possible for these drugs to come from Paraguay, a country with a vast culture of counterfeiting foreign products, with less rigorous legislation and supervision2,j and with lower prices. Santa Catarina has a border with Argentina, which may also be an entry route for such products.

There was a gradual decrease in seizures of Viagra® and an increase in seizures of Cialis® from 2007 to 2010 (Figure 2B). The most significant fall in Viagra® seizures and increase in Cialis® seizures occurred in 2010, and this may be related to the breakage of the patent for Viagra® containing the active agent sildenafil citrate,k which caused a fall in prices and made counterfeiting less lucrative. The higher market value of Cialis® compared with Viagra®, its longer duration of action (up to 48 hours) and fewer adverse effects,1 have made Cialis® even more attractive for counterfeiting.

The high price (R$ 38.46 for two tablets of Viagra® 50 mg and R$ 79.00 for Cialis®l 20 mg), together with the fact that no retention of a medical prescription is required (which is required by ANVISA for medications contained in Ordinance No. 344/98m of the Department of Sanitary Surveillance, such as anabolic steroids), may explain the high counterfeiting rate of these drugs.

Despite lower prevalence, counterfeiting such as that of the drug Glivec® (Novartis) makes the problem of drug counterfeiting more serious. Glivec®n (imatinib 50 or 100 mg) is an antineoplastic agent used for treating chronic myeloid leukemia and malignant tumors of the gastrointestinal tract, and chemical tests have shown that the counterfeits do not have any active ingredients.

Drug counterfeiting gives rise to a high sanitary risk, since no counterfeit drug is subjected to the quality and efficacy tests required by Anvisa. Hence, for consumers, there is no certainty regarding the dose or the active ingredient involved. Such products may not produce the desired therapeutic effects and may cause unexpected clinical reactions to appear. Consequently, they worsen patients' health conditions and prolong the treatment time, thereby placing a burden on the population and public coffers.

The results from this study reflect the real dimensions of the problem of drug counterfeiting and smuggling in Brazil, as shown by the huge increases in the number of seizures made by the Federal Police every year.

Consumption of these drugs causes enormous harm to patients and the country's public health. The suppression, supervision and education actions implemented by health regulatory agencies, police bodies and the federal government need to be expanded, with the aim of minimizing the population's access to counterfeit drugs as much as possible.

Publicity campaigns educating the public about how to identify counterfeit drugs, warning about their effects on health and emphasizing the importance of buying medications in places permitted by Anvisa need to be reinforced. There need to be increases in supervision by the bodies responsible for such actions, at the country's ports, airports and borders, as well as in pharmacies and areas of informal trade, in order to reduce the supply of these products to Brazilian consumers and to protect them from the serious problem of counterfeiting.

To the Federal Police Department of Rio Grande do Sul (Porto Alegre/RS) for making the data available for conducting this study.