Brazil has not had endemic circulation of the measles virus since 2000. Between May and June 2011, the Metropolitan Region of Campinas, State of Sao Paulo, Southeastern Brazil, reported three cases of measles. This report presents a descriptive study of the cases, control measures, and the search for a possible source and secondary cases. The genotypic characterization of the virus identified genotype D4, circulating in Europe. Secondary cases or index case were not found. The control measures and adequate vaccination coverage in Metropolitan Region of Campinas contributed to the interruption of disease transmission.

Epidemiological surveillance services (ESS) in the municipalities of Americana and Nova Odessa, in the Metropolitan Region of Campinas (MRC), identified three cases of measles between May 20 and June 1, 2011. These cases had a history of moving between the neighboring municipalities of Santa Bárbara D´Oeste and Sumaré, in the MRC, during the period of transmissibility.

A team composed of technicians from the Centro de Vigilância Epidemiológica do Estado de São Paulo (CVE-SP – Sao Paulo state epidemiological surveillance center) travelled to the MRC. The aim of this study was to confirm and describe the measles outbreak and to investigate sources of infection and possible secondary cases.

A descriptive study was carried out of the three identified cases of measles, detailing their clinical evolution, vaccination situation and locations frequented by the respective carriers during the incubation and transmission periods, as well as their contacts during these periods.

Contacts within the household and at work were investigated, as well as educational and health care establishments.

Doctors’ notes, archived in the educational institutions or workplaces frequented by the confirmed cases, were revised. Those investigated were diseases involving rashes, respiratory symptoms, high fevers or without specifications. Serology results positive or negative for measles and/or rubella in public and private laboratories in the four municipalities were revised, excluding routine ante-natal exams.

Dengue notifications in the municipal ESS with negative serology but with records of fever and rash or without any recorded symptoms were re-evaluated.

Simple random samples of patients, care providers and health care professionals present in the health care establishments during the period that the cases were cared for were selected, considering a prevalence of 50.0% and a confidence limit of 5%. These individuals were contacted by telephone and asked about any symptoms in the period in question. Up to three attempts were made to establish telephone contact, at different times and on different days. It was deemed to be a loss if there was no response to after these three attempts. Contact was made with parents or guardians, if the selected individual was a minor. It was deemed to be a compatible case if the individual reported fever and a rash. Individuals classified as compatible cases were interviewed face-to-face, using a semi-structured questionnaire developed for the study.

Suspected cases were those involving coughing and/or runny nose and/or conjunctivitis, as well as fever and rash.

Cases with a diagnosis (clinical or laboratorial) of another disease were ruled out.

Cases 1 and 2 had no record of vaccination as the family chose to practice alternative medicine. Case 3 had records of measles vaccine at ages nine months and 15 months, and he reported acute lymphoid leukemia and chemotherapy at age six.

The three cases denied having travelled internationally or having had contact with someone recently returned from abroad.

All three presented maculopapular rash accompanied by runny nose, two cases had dry cough and fever. One reported malaise, sore throat and conjunctivitis. None of them had complications or were hospitalized. All recovered without lasting injury.

Laboratorial confirmation of measles occurred as IgM antibodies were detected enzyme immunoassay and IgG seroconversion in paired serum samples. It was possible to identify the genotype D4 virus in clinical samples of cases 1 and 2.

In addition to 53 compatible cases found in the active search, three other cases identified during the Santa Bárbara D´Oeste ESS actions fitted with the definition of compatible cases and were included in the study (Figure).

Of the remaining 38 compatible cases, 25 had been vaccinated, presenting documentation at the interview, all with at least one dose of measles vaccine.

The 15 suspected cases presented coughing and/or runny nose and none presented conjunctivitis. Of these, one had samples for serology and virus isolation taken within the timespan, and presented negative results. Eleven suspected cases had been previously investigated in the laboratory as suspected dengue cases. Their serum samples were collected and tested in a public health laboratory for measles and rubella, all with non-reactive results.

In three suspected cases, laboratory investigation was not possible. However, these cases had been vaccinated, receiving at least one dose of measles vaccine.

There was a measles outbreak in the MRC in 2011, with three confirmed cases, after more than ten years with no recorded cases in the region. The cases met the standardized definition of suspected cases, with a characteristic clinical picture and laboratory confirmation. aaMinistério da Saúde. Secretaria de Vigilância em Saúde. Departamento de Vigilância Epidemiológica. Guia de Vigilância Epidemiológica. 7. ed. Brasília (DF); 2009. The study did not identify a direct relationship between the three cases and a possible imported source case. No epidemiological link was found between case 3 and cases 1 and 2. The active search did not find any secondary cases.

There had been no measles cases in a decade due interruption of endemic circulation since 2000 and high vaccination coverage. 44 . Prevots DR, Parise MS, Segatto TC, Siqueira MM, Santos ED, Ganter B, et al. Interruption of measles transmission in Brazil, 2000-2001. J Infect Dis. 2003;189 Suppl 1:S111-20. DOI:10.1086/368030
https://doi.org/10.1086/368030... This situation may make rapid recognition and diagnosis of the disease difficult. Delayed notification interferes in investigating the chain of transmission and in implementing timely control measures.

There were some limitations to the active search, mainly concerned with losses associated with impossibility of establishing contact by telephone, refusals to respond to the questionnaire or access to doctors’ notes. The individuals were interviewed up to three months after the symptoms, which could result in memory bias.

The highly contagious character of measles, and its endemic circulation in various countries, together with globalization, maintains the potential risk of it being reintroduced into Brazil. It is important that high levels of vaccine coverage in the population are maintained, and that Brazilian travelers are alerted to the need to keep their vaccinations up to date before travelling and reinforce this recommendation for visitors before entering the country. In addition, health care professional should remain alert to the disease and epidemiological surveillance should be active in order for measles cases to be identified quickly. 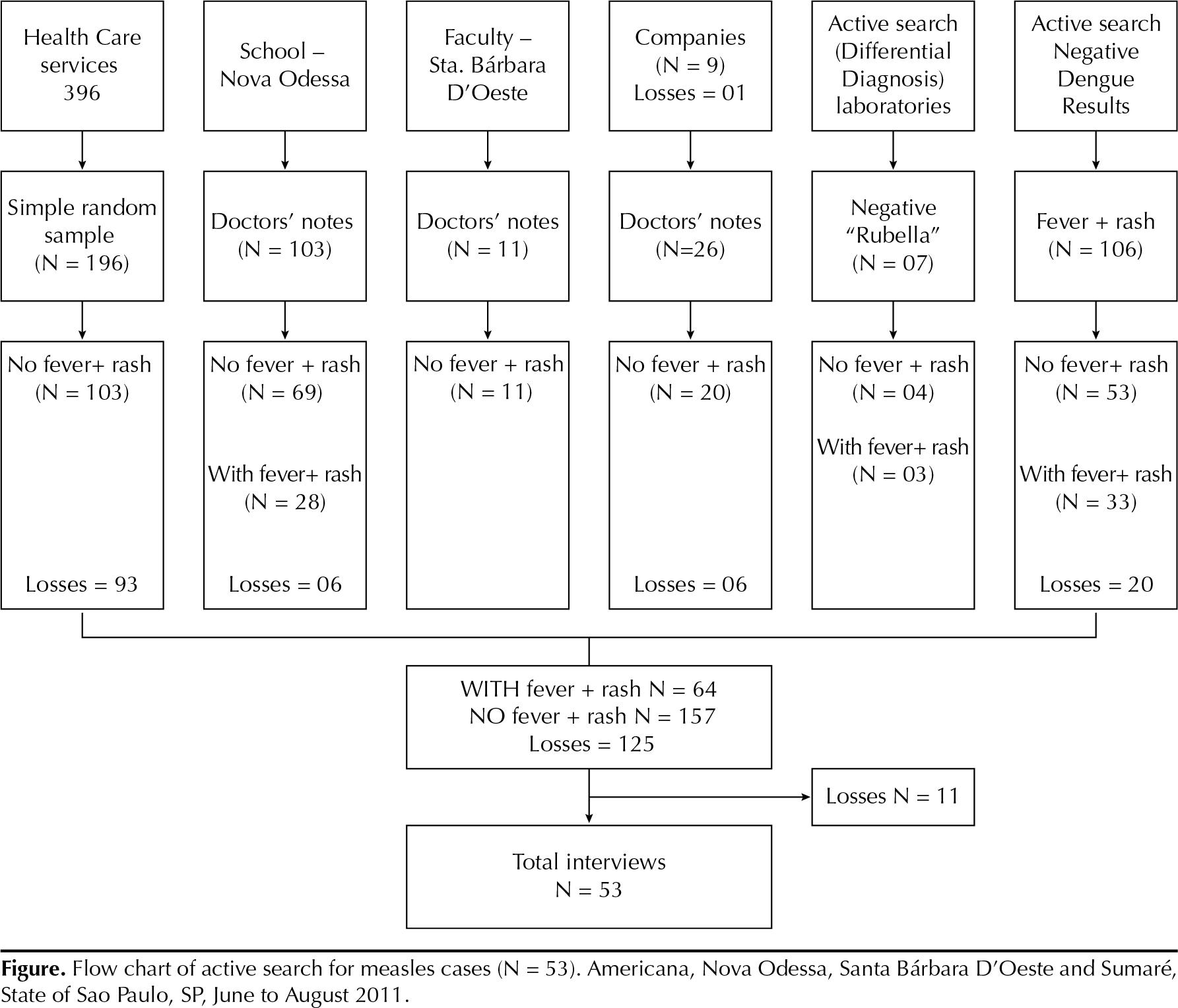